ALL members of the Yew plant family are poisonous! 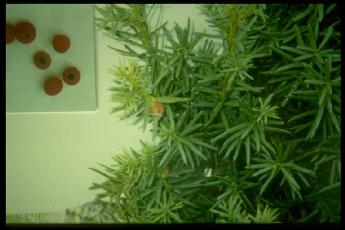 They are beautiful but toxic and can deliver death to barefoot horses within minutes. It is the Japanese or English Yew, which is an ornamental evergreen widely used by homeowners for landscaping. In listings of poisonous plants, it is called TAXUS CUSPIDATA or TAXUS BACCATA.

Six to eight ounces of leaves can kill a horse in an hour or two. It is often grown as hedges and range in height from less than 2 feet to more than 60 feet. It is dark green with needle-like foliage and a red berry that looks like a pitted olive. The berry is the only part NOT poisonous but rather the greenery, even after it has dried or died is the poisonous part.

Very rarely will animals show signs up to 2 days later: trembling, slow heart rate, difficulty breathing, gastroenteritis (stomach upset and diarrhea). Toxicity is compounded by the apparent palatability of yew. Many animals are poisoned accidently when yew trimmings are thrown into the pasture or when yew is planted as an ornamental within browsing reach.

Infrequent reports of dogs chewing the leaves resulted in gastroenteritis, seizures, and aggressive behavior. The toxin is taxine, a mixture of alkaloids, that slow down cardiac conduction. As little as 0.1 to 0.5% of the fresh plant per body weight is lethal. Death is due to cardiac and/or respiratory collapse.

Check your home and barn for this lethal plant and be on the lookout for this plant when you travel with your barefoot horse to an endurance ride or wherever your horse hoofs takes you!

I am responsible for the accounting at EasyCare. My responsibilities require me to manage accounts payable, accounts receivable, purchasing, receipt of inventory and international order processing.