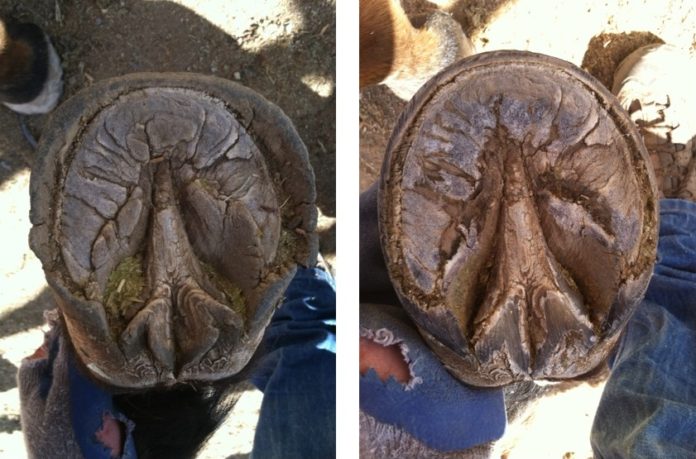 More and more I am realizing how valuable a camera can be as a trimming tool. Lately I’ve been allowing more time to take before and after shots of horses feet when trimming. I find that what my eye and brain can’t grasp in the present moment can often be processed while viewing at a later time. I recently trimmed an Arabian with at least nine weeks of over growth. When I looked at the before and after photos of the Arabian I was astonished at the changes in the coronet band and weight distribution of the heels. When I trimmed her my only thought was that this horse needs a trim. 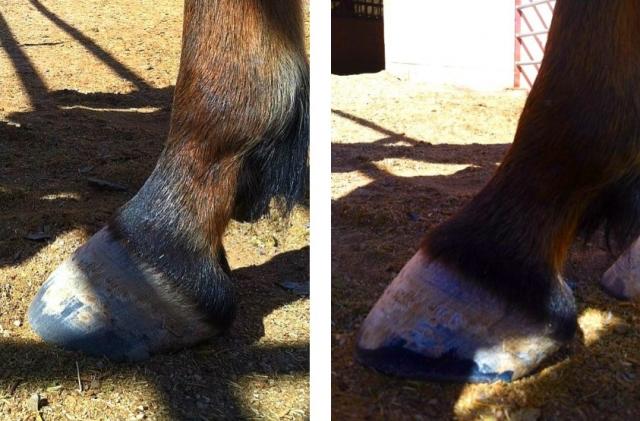 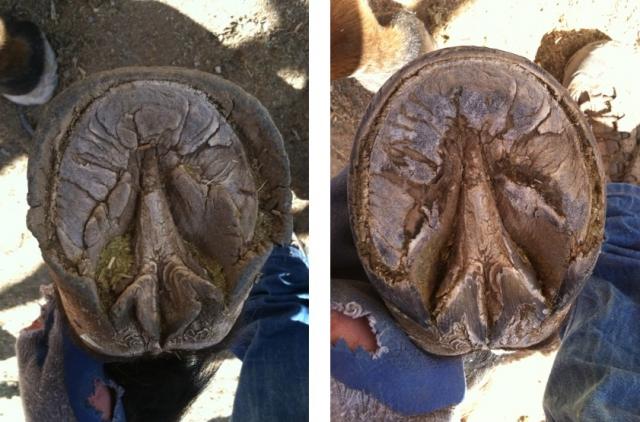 Arabian before (left) and after (right) trimming.
The same thing happened the following week when I pulled EDSS shoes from a Quarter Horse and trimmed him. I just knew he had to get out of those EDSS shoes. It was only after looking at the photos that I realized just how significant the changes were in the coronet band and heels after the removal of shoes and a trim. In this case the trim was minimal, mostly just rounding edges and removing unnecessary frog material. 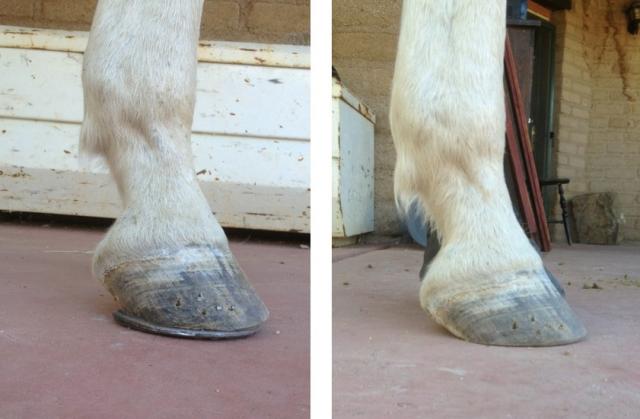 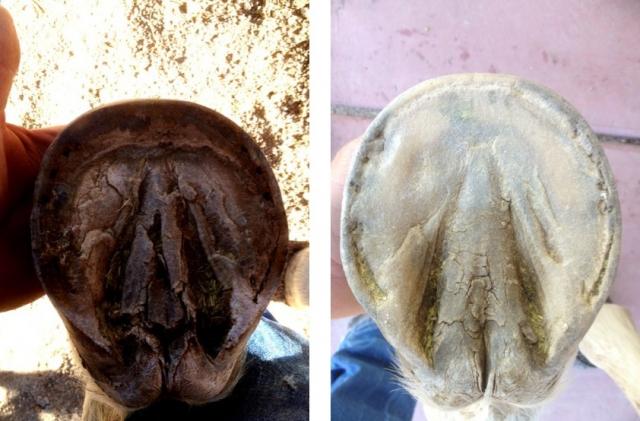 Quarter Horse before (left) and after (right) trimming.
The trimming application was the same for both horses, removal of the wall to the exact contour of the peripheral edge of the sole including the bars except at the heel purchase and rounding all the weight bearing surfaces. This seemed rather routine to me at the time, however, the following week I couldn’t stop bringing up the individual images and trying to figure out how such minimal trimming could have had such dramatic results. I had a hard time understanding the mechanics that were involved. I have to admit that most of my attention is focused on the sole and the information that is available at the time. I welcome positive changes elsewhere, but I don’t try to make corrections any where other than weight distribution to the sole. My confusion magnified after putting the images of the two horses next to each other.
After several days, I finally noticed that not only were the angles of the coronet bands affected, but the angles of the heel bulbs had changed as well. That’s when it dawned on me that by removing the overgrown wall, bars, and frog (re-establishing a more natural foot print) both horses were able to properly weight their feet and allow the soft tissues to reposition closer to where they belonged. Yes, each individual foot on each individual horse has its own correct position. Furthermore, each individual foot being in its correct position aids in the correct positioning of the three other feet. That’s one of the reasons that hoof boots and pads or 4″ of pea gravel/sand footing work so well to balance horses and make them comfortable, not to mention preventing problems in the first place. Horses standing in this type of footing are allowed to self level or compensate for over growth and/or conformation challenges. In a way, boots with pads could be considered mobile footing. I would never recommend trying to affect the hairline with a trim – I would only trim according to what the sole is ready for at the time. The more information you have, the better when it comes to making informed decisions while trimming.
David Landreville, Landreville Hoof Care