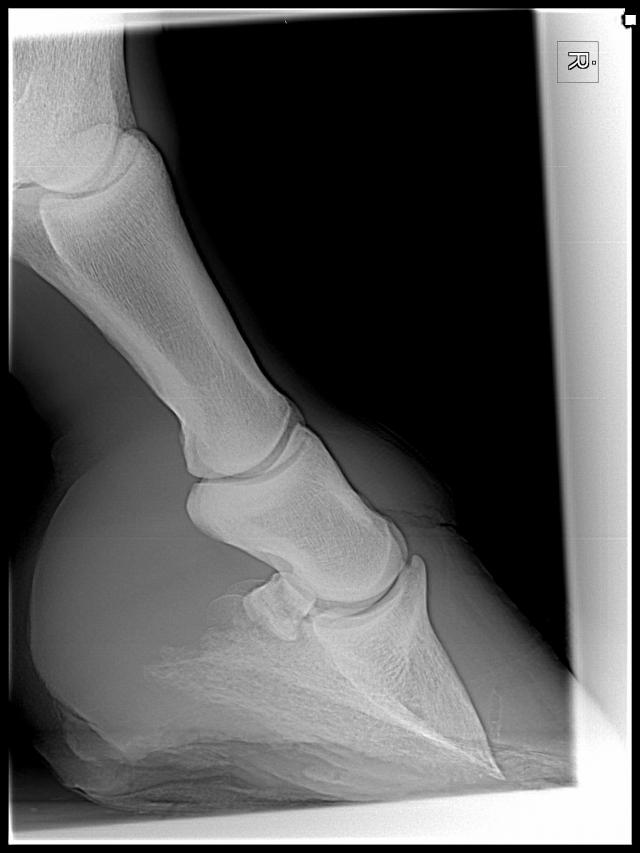 I was introduced to the barefoot and booting way of life in a very unexpected way. Our dressage horse, Chase, escaped from the barn with his sidekick during the night. Somehow, Chase had a collision with a guardrail resulting in a horrible career-ending injury. This resulted in a 28 day stay at Tennessee Equine Hospital. He foundered 14 days into the stay. Once he was home and away from the constant supervision of an excellent veterinary team, I found myself in a 24-hour a day panic questioning if I had what it took to climb the mountain ahead of us. This is when our life-changing education began. 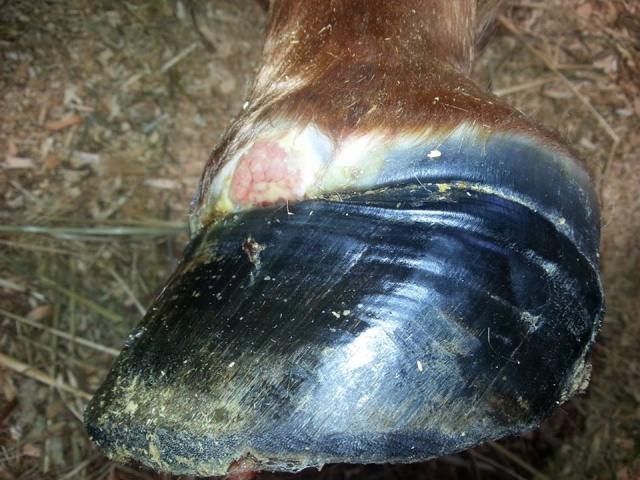 We chose to rehab him barefoot because we knew there would be sole penetration, draining, and growth rate changes at different places around the foot. Shoes or hospital plates would just complicate the situation. As I read about barefoot founder rehab, it opened my eyes to the importance and purpose of a proper hoof mechanism, even in healthy hooves. 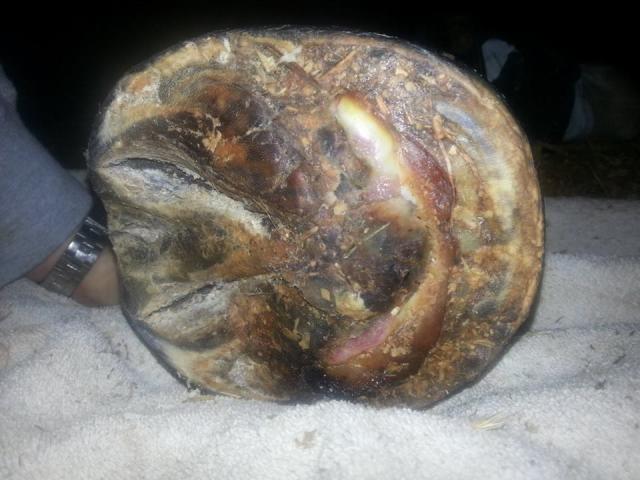 A month after the founder, his feet started to fall apart. We knew it was coming, but it startling nevertheless. He began abscessing at the coronet band and there became a crack in the already bulging sole in the shape of the coffin bone. We could also see the growth rate continue from the quarters back, while the front of the feet had no growth due to the disruption in the blood flow feeding the foot. We became diligent at keeping the toes rasped back as it seemed the growth at the heels with no toe growth was tilting him up and over the front of the hoof wall. This pressure exerted on the front of the foot was further strangling the already compromised blood flow. As soon as we pulled the toes back, the abscessing areas at the coronet went from dark red and bulging with congestion to a pale pink and much less swollen.

Once we isolated the abscessing areas, we used poultice pads to continually draw from the area. Had we not done this, more areas of abscessing may have emerged around the coronet band. Too many of these and the hoof may have lost its connection and the risk of sloughing would have become much higher. This was a very important practice during all of this. The initial abscess areas were our gold mine to draw infection from. The bottom of the feet did open up and exposed the sole corium. We did not shorten the heels at this point. Taking that from him at this stage in the game would have been taking the only stable, intact hoof he had. His hooves stayed wrapped in diapers filled with sugardine and poultice pads on his coronet bands. This was wrapped over with vetwrap to keep shavings from getting in. 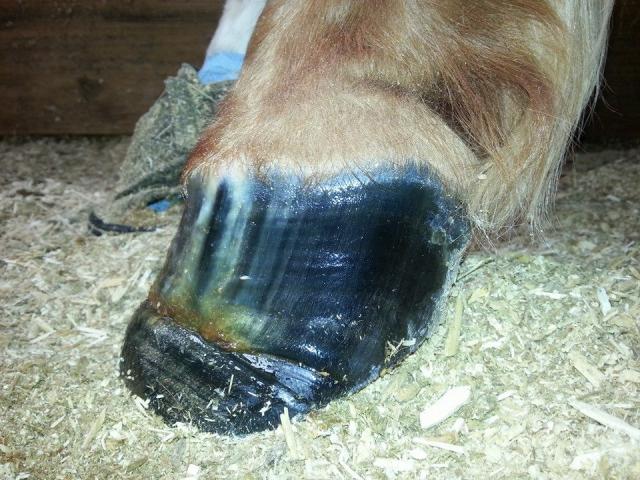 He slowly began to grow a new foot and the exposed corium took on a brownish, leathery appearance and began to toughen. Now is when we began to address the heels. The only thing we could do was to have patience, and maintain a gentle trim every two weeks to control the mismatch of growth rate. It was also important to watch the progression of the lamellar wedge forming and keep it off the ground at the toe. You have to treat the tight new growth from the coronet band as the most important. Compromising it by allowing flares to stay on the ground and exhibit leverage would separate the new growth like velcro, hence preventing progress. 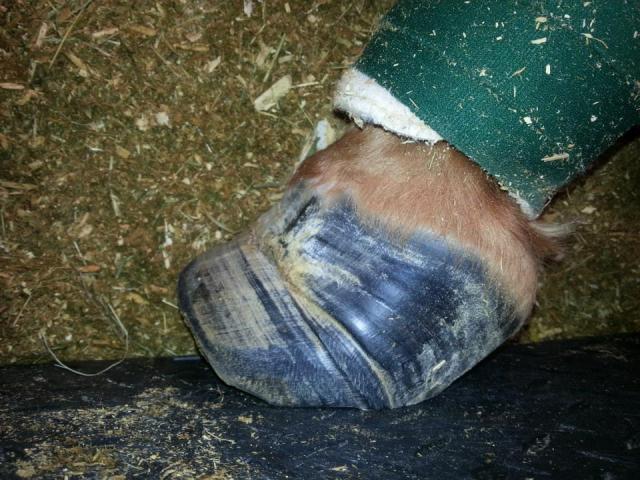 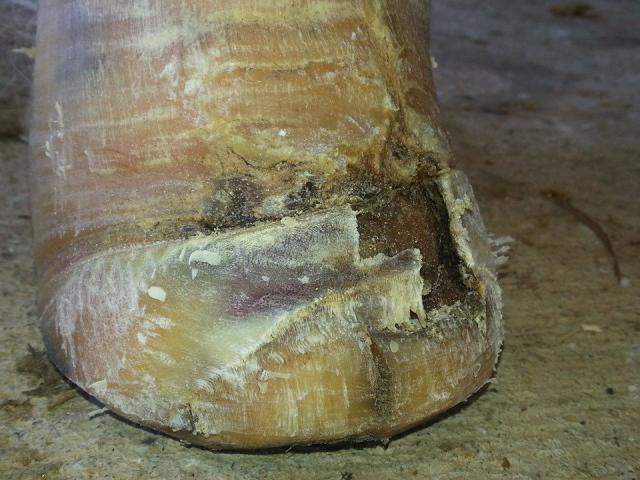 We are now at 11 months and still healing. There is almost a completely new capsule. He even had ½ inch of false sole as well as ½ inch thick old frog break out this week. The old toe that separated from the founder actually broke off as it grew to the ground since it is hollow underneath. We have experienced a few setbacks along the way in the form of infection in the toe when we were unaware dirt and bedding had pushed itself into the separation at the toe. We have learned to keep that open and flush it regularly. He is luckily quiet enough to go into the field and graze. 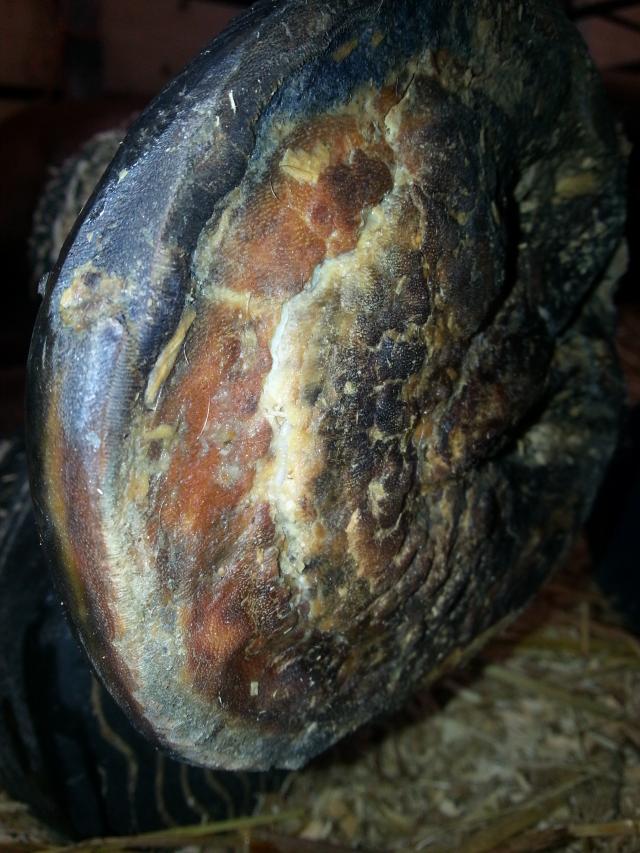 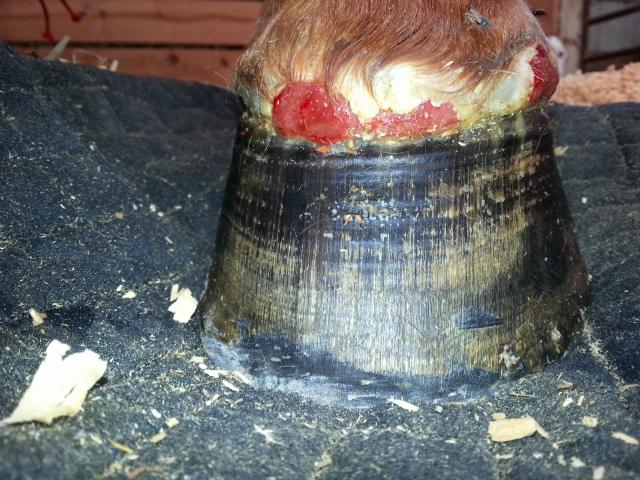 He did not experience a metabolic type founder so we are fortunate that he can graze freely which has helped his body condition rebuild as he roams the field. The wonderful education I have received resulted in our sales and other dressage horses train barefoot or in Easyboot Gloves. Next is to use the EasyShoe Performance on the other dressage horse during this show season.

Founder rehab is never guaranteed and can go south at any minute. It is exhausting, emotional, expensive, and relentless; however having the knowledge and team willing to embark on a barefoot/booted method I feel can set the horse up for greater success.