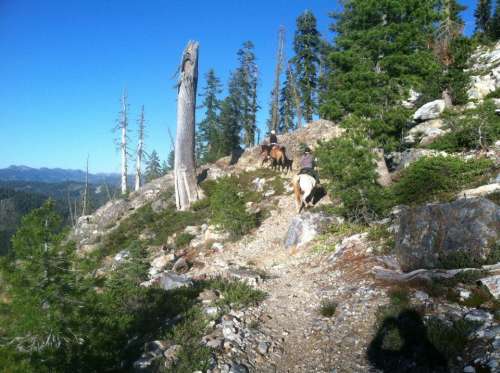 When I first transitioned Roo to barefoot-n-boots in 2009, the biggest hurdle to overcome was persuading his back feet to stay in their Easyboot Gloves when going up steep hills – particularly after going through water (which seems to be practically every climb we do).

Here’s what I wrote at the time:

“I couldn’t get Gloves to stay on Roo’s back feet. Garrett told me I needed a smaller size but I couldn’t see how to smush him into the next size down…I sat down and made a paper template of the inside of the Easyboot Glove. Then I held it up against the underside of Roo’s rear foot to ascertain exactly how much toe I needed to remove to get him in the next size down. My impression had been that I was going to have to compromise hoof integrity to make it work (which of course I wasn’t willing to do), but when it came down to it Roo just needed a bunch of toe removed – toe that I later decided probably shouldn’t have been there in the first place…“

In the interim years since writing the above, Roo got some time off while I rode some of my other horses but this year I decided he’d been mothballed long enough and it was time to get him up and running again. To start with, we just conditioned barefoot, since we weren’t going far or fast enough to warrant using boots. As he got fitter and we started to increase the mileage (and the weather turned dry and the rocks came out to play) it was time to get him in boots again. And we were right back to 2009 – once again I couldn’t get those back boots to stay on and his right rear would pop off every time we went up a hill, with the left rear also making the occasional escapade.

Remembering my lessons-learned and following three frustrating rides in a row where I lost four back boots, I sat down to analyze what was going on. My problem was two-fold: 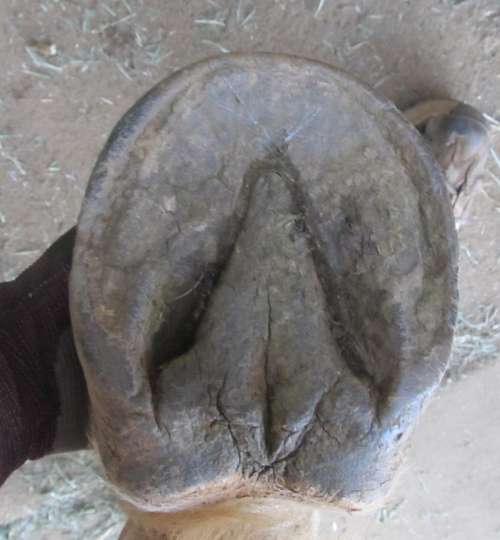 Here’s Roo’s right rear about two weeks after I dubbed his toe. Time for a touch up on the rest of his foot.

And so we put these newly-fitted, newly-accessorized boots to the test, and Roo got to do the section of trail between Robinson Flat and Foresthill at the weekend – 32 miles of canyons. If a boot is going to come off, you can guarantee it’ll come off somewhere on this trail. 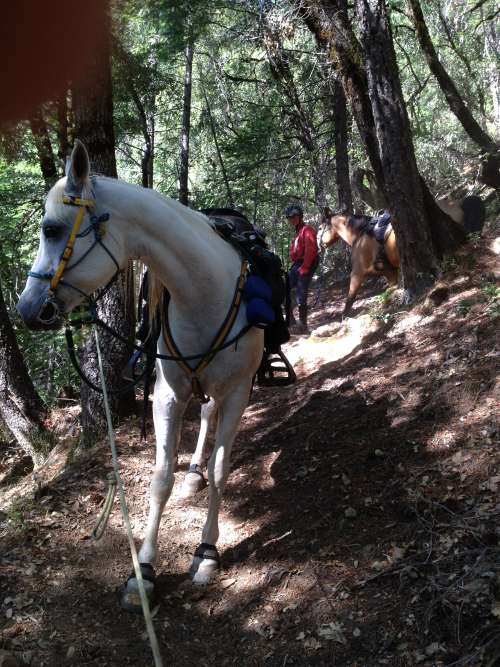 Roo waiting for Fergus and Patrick to catch up on the trail from Last Chance to Swinging Bridge –
1700 ft/520 m down and so rough in places that it’s better to walk on foot. 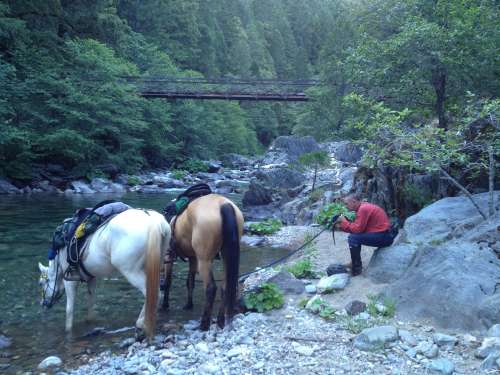 Remember the part about how all our best climbs seem to be proceeded by water?
Here’s Roo and Fergus getting a drink in the creek below Swinging Bridge.
The trail traveling up from this creek to Devil’s Thumb has 34 switchbacks and
ascends 1500 ft/460 m – if your footwear is suspect in any way, you will lose boots.

Late in the evening we arrived in Foresthill, tired and grimy, but having had a most excellent ride. The pones did great and performed above expectation and best of all, Roo’s boots never shifted the entire time. Now that right rear boot is broken in, it’ll be much easier to get on next time around. Looks like it’s time for Roo to hit 50-mile endurance rides again and I’ll be comfortable that I’m not going to have to spend the day futzing with his boots.