Well, predictably I couldn’t muster the energy to glue boots on the pones by the time we got up to Washoe Valley for the two-day endurance ride last Friday afternoon, and even more predictably I wished I had afterwards.

Firstly, the ride was a great success. This was the first 50 miler Patrick and Fergus had done since Christmas 2009 so he was a little apprehensive about it. I told him it was a tough trail, but a really cool one and well worth the effort. Fergus did brilliantly all day, only having a short floppy moment which we put down to his having led for the first 35 miles – and as soon as we stuck Uno in front, Fergus perked up and turned back into his normal powerhouse self – overtaking us within a few miles and proceeding to trot enthusiastically over some really rocky trail, causing me to hold my breath, but we had no problems.

Fergus had no tack issues, no boot issues, no eating and drinking issues. Nothing.

Uno, on the other hand…

Actually, it wasn’t that bad. I wrapped the heck out of everyone’s feet with athletic tape (except for Uno’s right rear, where I couldn’t get the boot on when I did wrap it). The freshly-trimmed Fergus was wearing a set of brand-new Gloves without PowerStraps, while Uno was wearing the same set of Gloves that he wore last month for NV Derby 50 (with four PowerStraps).

I confess to having let Uno’s feet grow out too much over the winter and as a result am now paying the price of forward-slung hooves. The left front is a little flared at the toe, so the top of the boot is gapping slightly at the front. In the first ten miles or so, I had to stop a couple of times to untwist this left front – finally getting to the stage of ignoring it which worked really well as it twisted back on its own and stayed put …right up until it came off at around 20 miles. 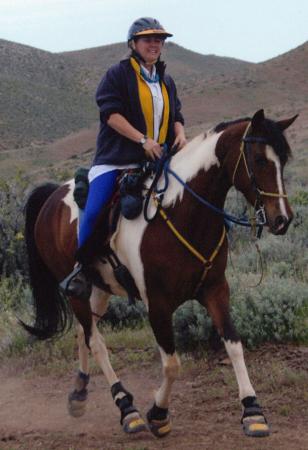 Uno, doing an impersonation of Gumby (Pokey?) with his front feet.
This was during the twisty-boot segment.

As it turns out, the boot came off because of the couple of tablespoons-worth of sand that he’d scooped into the toe. We’d just come through a portion of trail that was actually creek-bed and that was the final straw. But strangely, after rinsing out the sand I stuck the boot back on (now sans tape, since it had fallen off) and the boot stayed on for the rest of the ride, despite some of the fastest singletrack-trotting I’ve ever done (Fergus towing us along at warp-speed), followed by trudging through some fetlock-deep sand on Washoe Lake beach. 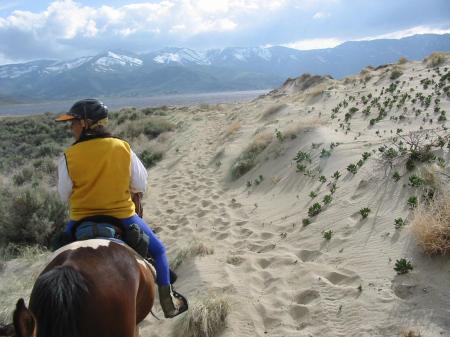 Uno and me in the sugar-sand dunes on the edge of Washoe Lake. 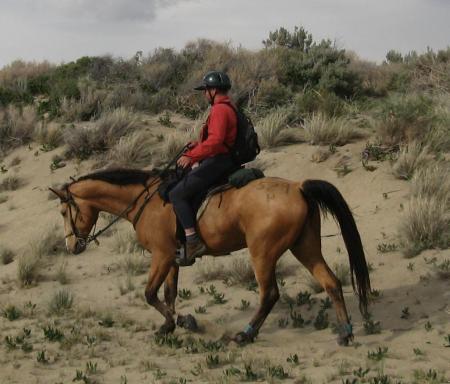 Fergus and Patrick trying to find some firmer sand on the beach (without success).

We couldn’t really complain, given how well the boots had performed for the rest of the interesting terrain – rocky roads, climbing up various types of footing, and finally the infamous SOBs. 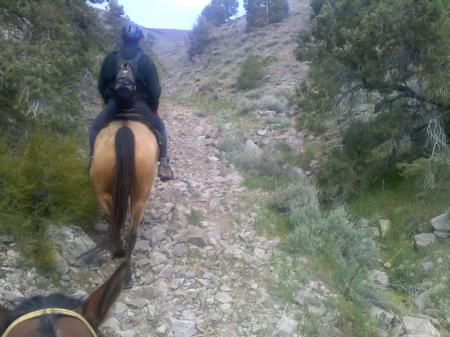 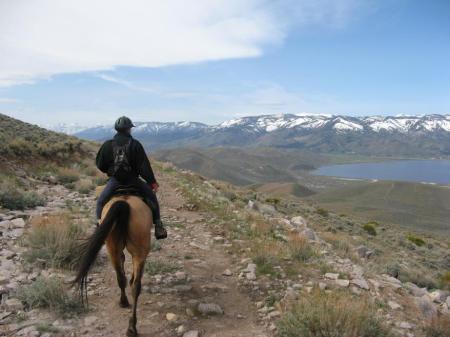 Looking down on Washoe Lake with the Sierra in the background. 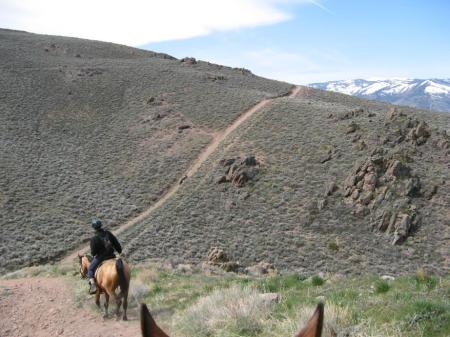 At the end of the ride, both horses had some sand in the back of the gaiters, but it was easily shaken out by dropping the backs of the gaiters down. Fergus had had no boot issues whatsoever all day …freak… (thank goodness he’s not my horse – what would I write about?)

Both horses finished looking (and feeling) very perky and definitely ready for more. Fergus got the next day off – hanging out at the trailer, munching his way through a large hay bag – while Uno had to go out for Day 2.

Unfortunately he’d gotten some slight scuffing at the bottom edge of the front of the gaiters on his back pasterns – where the two halves cross. But it didn’t look too serious and the spots weren’t sore, so I smeared on desitin and kept an eye on them.

Knowing that we were going to be doing the creek-bed trail in reverse – uphill – I considered my options and finally chose to rewrap his hoof, put on a new (non-stretched) boot on his left-front , and wrap athletic tape around the top edge to keep out the sand.

Day 2 started with some light icy snow while I was tacking up. I rode with Tami Rougeau who was also doing her second day in Gloves. As we picked our way up the first rocky climb, we both agreed that we’d wished that we’d put Goober Glue in the bottom of our boots for extra cushioning (something that I would have done, had I glued boots on), but neither of us were willing to chance taking off boots that had stayed on so snugly the previous day. 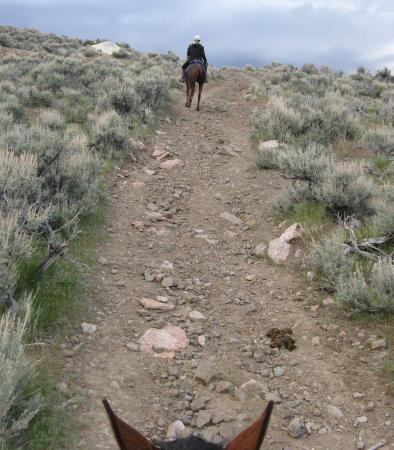 Having done this ride twice before, I knew the trail was rocky, but it seemed even worse than usual. Within a few miles, we once again came upon the creek-bed portion at the bottom of Jumbo Grade, but splashed through it without incident and continued up the trail. 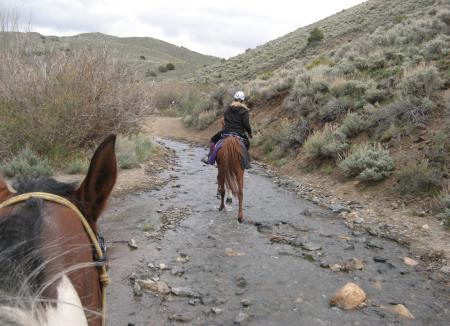 Bottom of Jumbo Grade – turned into a creek-bed

If anything, the trail on this day seemed even rockier than the previous day. Uno had been a little sore during the previous few weeks, with some heel bruising evident when I rasped him. To tell the truth, I was concerned that I’d overdone his trimming and that 100 miles over two days would result in him being foot-sore. But despite picking his way carefully through some of the rockier parts, he never seemed to suffer from any tenderness – witness this photo of him striding out on day 1: 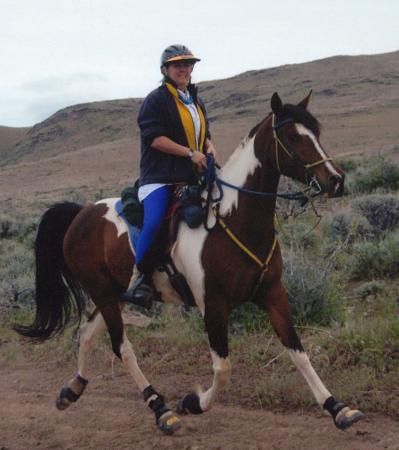 No mincing going on here.

His preferred pace is usually a jog-trot which requires little energy, but he really worked hard for once during the weekend – following Fergus the first day and Tami’s Fancy the second – neither horse is a slouch when it comes to moving out on the trail.

My athletic tape wrap to keep the sand out didn’t last more than a few miles, but got us through the creek-portion at least. When we came back to camp for the hour-long lunch hold I tasked Patrick with finding a better option. He broke out the duct tape and did a masterful wrap job – such that the tape stayed on for the second half of the ride, performed wonderfully (no sand in that boot), and looked spiffy (when you’re slow, you might as well look good – Uno received many compliments on our colour-coordination this weekend): 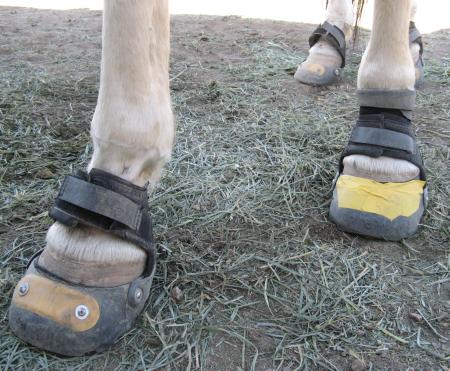 Uno’s yellow duct tape wrap job – it did a fine job keeping out the sand.

We finished up the day with both Uno and Fancy bopping along through the sagebrush – just as energy-filled as they had been the day before – quite amazing after 100 miles of rough trail.

The only bad thing that happened all weekend (if you ignore Uno’s tendency to forget to eat or drink until about 30 miles into the ride, which worried me greatly but didn’t seem to do him any harm) was that the scuffing on the back pasterns developed into full-blown weepy patches. It didn’t alter his gait in any way, but was a lesson in why glueing for two days would have been a better option. 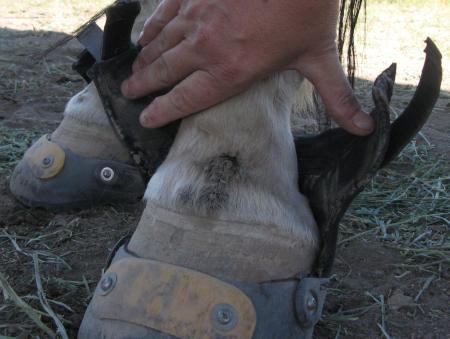 This is actually crud-covered desitin, but shows the weepy spots on Uno’s rear pasterns. As far as I can work out, he also managed to scrape his pastern on a rock (the area below the rub, closer to the coronet band) which caused him to develop a fat leg on Monday after we came home, requiring daily hosing and ointmenting.

Discussing the problem with Kevin Myers afterwards, he mentioned that using boots during training develops callouses on the skin, meaning that you’re less likely to rub. Initially I was surprised, having thought that we’d done quite a bit of training in boots this spring, but after consulting my log book it turns out that apart from NV Derby 50, we’d actually only done 25 miles in boots, compared to the 80 miles of training barefoot. Hmm. That would explain it…

So next time we do more than 50 miles, I will be using Glue Ons. And in the meantime I’m going to experiment with fastening the gaiters a little looser (I tend to snug them up really tight) and see if that helps the problem.

Despite these minor problems, I was thrilled with how well Uno did this weekend. Our next ride is NASTR 75 in a month and I’m going to concentrate on getting him to eat and drink better for that.

All my boys did me proud this weekend – and congratulations to Patrick on doing such a great job with Fergus – he’s turning into a real endurance rider. <sigh> soon I’m going to have to start putting up with spousal rivalry. 🙂 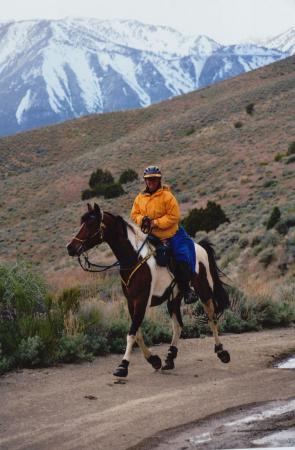