Well, so much for my “Trimming Day” plan – a two-week bout of lurgy sickness resulted in a stupendous 4 out of 24 feet being trimmed. Better than nothing, but not exactly what I’d hoped for.

Luckily by Saturday, I was sufficiently recovered to give Uno the trim he needed (after five weeks, it was definitely needed), followed by a proper boot fitting session.

Thanks to living in squishy mud and being ridden exclusively barefoot since he came off his break, Uno’s feet haven’t been expanding with quite the same alarming speed as they were in the summer. Back then, I was having to rasp him practically every time we rode. But interestingly, the lack of recent trimming did allow me to see how he’s been wearing down his feet. Unfortunately, it also allowed me to see that his tendency to travel like a banana – always keeping an eye out behind him, “just in case” – is resulting in the right sides of both front toes wearing down quicker than the left sides. I’d be happier if they were a matched set rather than looking like two left feet, but at least I know what to concentrate on, form-wise. 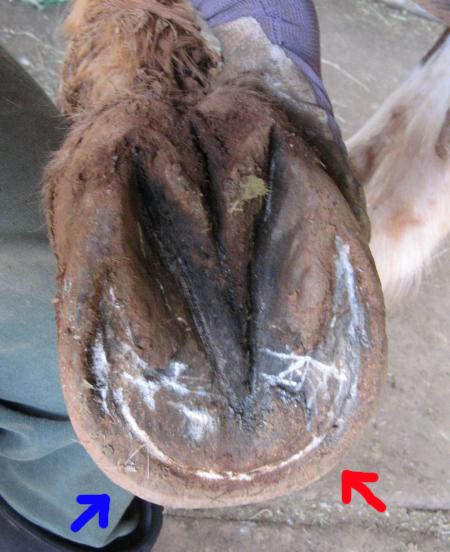 Uno’s left front foot – the red arrow shows the area of extra wear, while the blue arrow shows the tell-tale unworn area. If both his front feet mirrored this pattern, I’d assume he paddled as he trotted down the trail, but unfortunately they match exactly. He tends to banana to the right when travelling in a straight line – something that definitely needs adjusting.

Other than that, he had his usual overgrown bars, along with an interesting layer-cake effect (complete with moist black filling between the layers – ack). I really need to stay on top of his bars and keep an eye on this to make sure it doesn’t become a fixture.

The area to the right of the black line in his trimmed bar is also bar material: 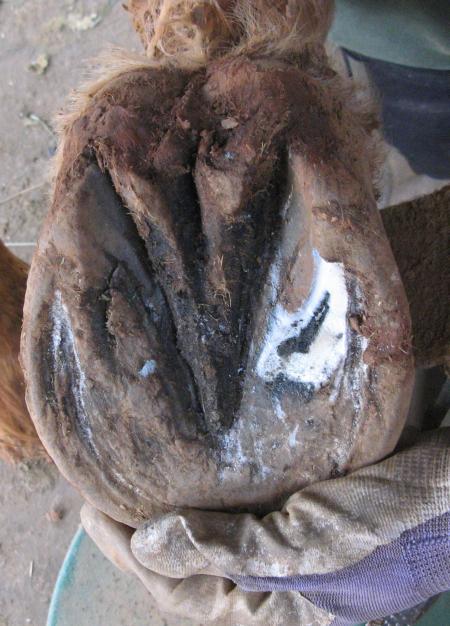 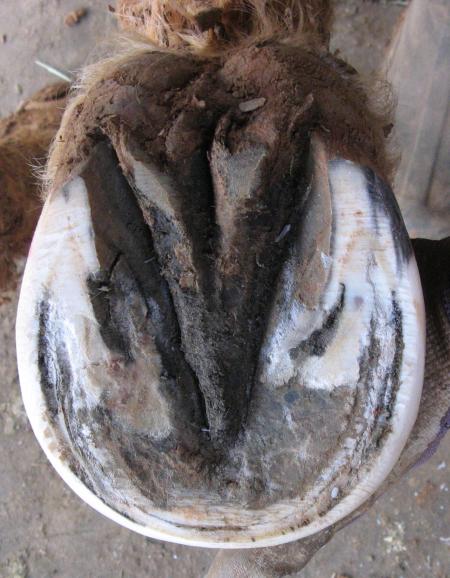 The layer-cake effect pre- and post-trim. I will watch this carefully over the coming weeks to make sure it grows out properly. 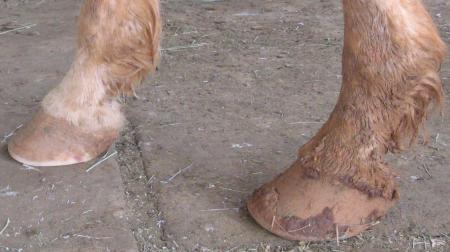 Uno’s front feet… ooh – lookit the looonnnggg toe on the yet-untrimmed left-front. That foot had quite the ski-jump effect going on….

Once his feetses were all tidied up, it was time for the official 2011 Boot Sizing Ceremony.

When Uno first started wearing EZ Boot Gloves he was in 1.5s on the front and 1s on the rears. Then in September 2010 I was trimming up his front feet ready to glue boots for Virginia City 100 and having a heck of a job – it took me an hour and half and I still wasn’t happy with the fit. Gradually it dawned on me that maybe I was trying to squash his spatula feet into boots that were a size too small. Sure enough, about half way through the ride, I lost both front Glue-ons. Comparing the “1.5s” he’d been wearing with a brand new size 2 boot – the smaller ones had stretched so much you could barely tell the difference between the two sizes.

It was definitely time to try him out in a size 2.

But then, here we are five months later. Uno’s had a nice long break and his feet have grown out naturally without help from my rasp-to-get-the-stupid-feet-in-the-stupid-boots-ack efforts, and I need to find out where we’re at. 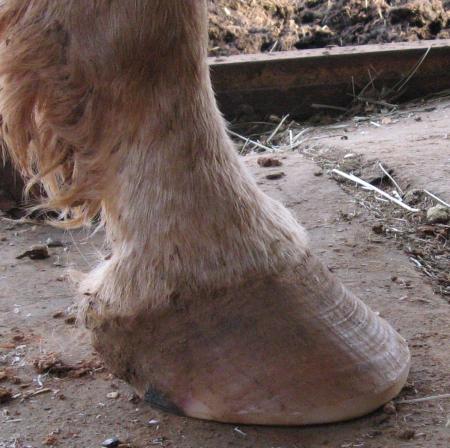 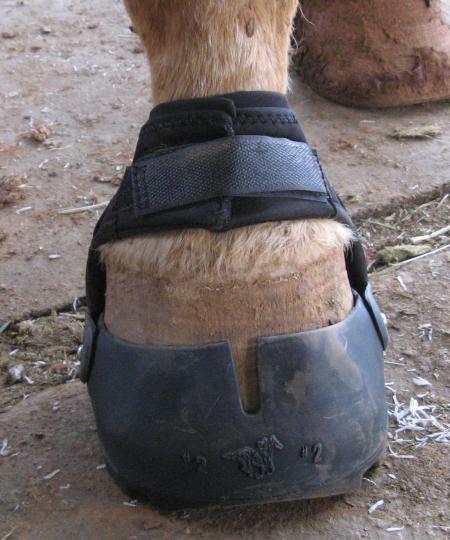 Yup – size 2 it is! He’ll need some power straps on there as his feet don’t fill the upper part of the boot quite how I’d like – the result of his spatula feet – but the bottom half is a good snug fit.

I finishing trimming up his back feet and refitted them – and again, it seems that he’s gone up a size in the rears as well.

From now on, I’m going to have to be extra careful in keeping track of my boots. Except for any new boots, every single size 1.5 Glove Uno has worn has been stretched closer to a size 2. Luckily, Fergus is a “large” 1.5 Glove in back so those boots can go to him, but Uno is a “small” size 1.5 in back – not only does he need a brand new, non-stretched pair, he also needs power straps.

Saturday night I dug around in my boot box and found a pair of new powerstraps, and then stole another set off a pair of old (and stretched) size 1.5 boots for his back feet.

And on Sunday we went riding: 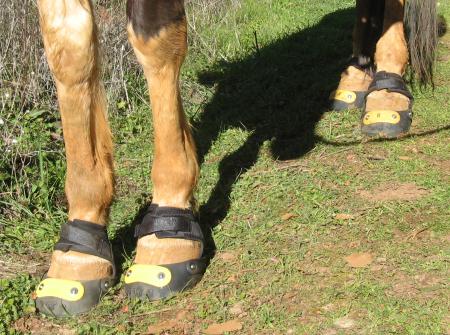 Usually I like to have a different colour power strap for the front and back boots – saves confusion when trying to put them on – but all I had was yellow straps. The remedy was a big “R” for “rear” on the back boots. 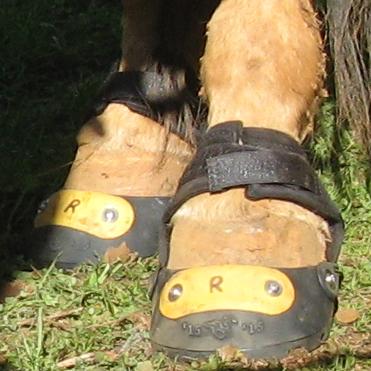 Luckily for me, Uno is finally starting to calm down after an, er, “exciting” start to the year (Lucy gets dumped at least once and comes close a few more times). The 70-degree heat helped on Sunday and we had a relatively mellow ride. There were lots of mountain bikes out in the sunshine – which was very good practice for his over-active imagination. After leap-frogging with one group for about 12 miles, he eventually came to terms with the idea that things coming up behind you aren’t automatically equipped with Uno Eye Pluckers and there for that sole purpose. 2 to 20 mph in a nanosecond on a loose rein is not my idea of a good time. Unfortunately, 2 to 20 mph in a nanosecond also doesn’t do good things to boots and we lost our right rear during that little event – ripping the gaiter irrepairably in the process <grr>.

Back to the drawing board. I have two choices which I’m going to experiment with.

The first is to use athletic tape under his rear boots. For the rest of the 20 mile ride he retained the other back Glove, as well as the sparsie old, non-powerstrapped 1.5 I slapped on, despite trotting up some steep hills. This encourages me that I’m on the right track.

The second possibility is that his right rear foot is slightly smaller than the left, so actually still needs a size 1 Glove. The following morning armed with a rubber mallet I did manage to get the size 1 boot on his foot, but am thinking I’m going to be in the same situation as I was with his front feet – struggling to keep a too-tight boot on.

So I’m going to try the athletic tape option first and see how it works out. In reality right now, most of the time we seldom ride further than 15 miles in training which he’s quite comfortable doing barefoot, so I only need boots for endurance rides, longer training rides, and rides where I know the footing is going to be tough. 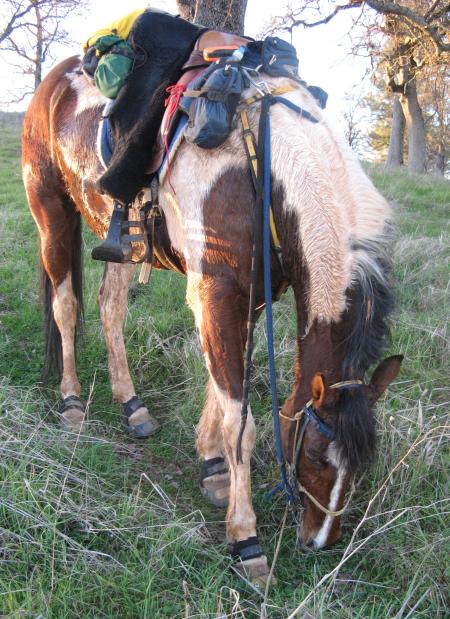 Uno enjoying a grazing break at 16 miles – that pone worked hard (witness the greased pig look). The green bag on the back of the saddle is my sparsie boot bag. During competition, I have one on each side and carry a full set of boots “just in case”. The bags are in an excellent location – completely out of the way, but easy to access from the saddle so you can be ready with boot in hand to hop off should the need arise. I managed to perform this maneuver so fast one time that my riding partner was still making a minor tack adjustment when I was done.