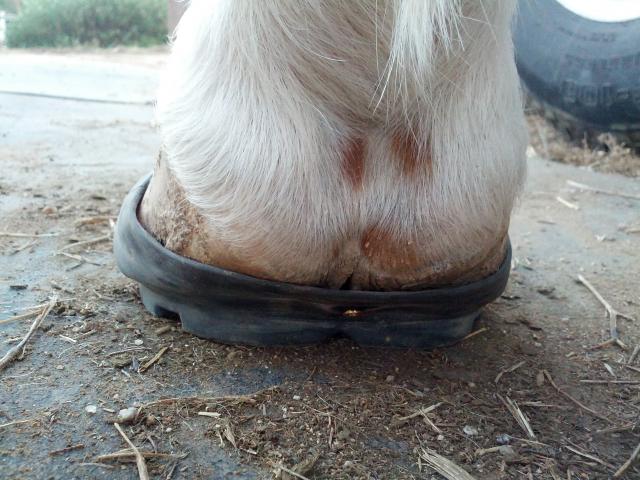 As the seasons change, so do horses’ hooves. Many people view horses’ hooves as static objects that do not change significantly once the horse has reached maturity. In actuality, the hoof is incredibly dynamic and influenced by a multitude of factors including trim style, length of trim cycle, diet, environment, and movement.

We received an email from a customer concerned about heel rubs after using the Easyboot Back Country. We asked him to send photos of the boot on the horse’s hoof and it was immediately apparent the boot was several sizes too small.

After further investigation, we realized we had received a Fitting Assistant form from this customer in the spring, and we had actually recommended this size. We were confused and couldn’t see how we would have ever recommended this fit.

After reviewing the photos from the spring, it became evident that the hoof had changed drastically since then. The horse had been injured for a few months, and the owner had been busy with work and had not used the boots until recently. Also, the horse had been on a 6-7 week trim cycle and was trimmed by the same farrier.

The owner had misplaced the photos from the spring, and when we sent them to him he was stunned. He had not realized how much the hooves had changed. He had trusted his farrier to do what he thought was best. The owner has since decided to use a new farrier and to pay close attention to his horse’s hooves.

This story illustrates several things. First, understanding basic hoof form and function is vital for every owner. If you do not understand something your hoof care practitioner is doing, ask them about it. A good practitioner should be open to sharing knowledge with the owner.

Boot fitting is not an activity that you only do once. If you notice changes in your horse’s fit, remeasure the hooves to help verify the fit. Finally, keep both written and photo records of your horse’s hooves and hoof measurements. When you see your horse on a daily basis, it can be hard to identify changes, but viewing photos side by side makes them easy to spot.

*Updated from original post titled “The Dynamic Hoof” in 2012