Heather and Jeremy Reynolds had another great ride this weekend in Easyboot Glue-Ons, taking 1st, 2nd and 3rd place with their friend Carole. Jeremy also won the Best Condition Award in the 75 on his horse, Tiran. Heather’s current blog post is below. 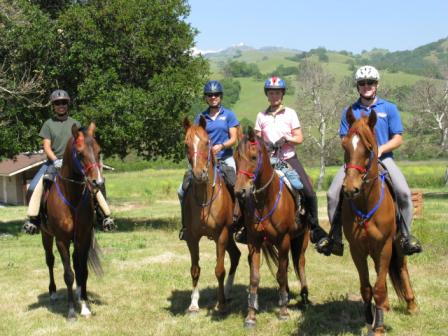 This weekend we went to the Shine and Shine FEI ride. We loaded up on Friday morning and discovered that the horse that the young rider was supposed to ride was not looking like he should be doing a ride this weekend. We needed to bring a passported horse for her to ride as she was flying up to the ride to try to qualify for the young riders championship. We looked around our horse selection and decided to take Strut. He had just come off of a long time of lay up as he had stitches in his shoulder since Easter morning. We knew we were pushing it but I was pretty sure he could handle it.

We loaded up Tiran, Makazin, Strut, Bey and Freebie (Carole’s horse). Jeremy would ride Tiran, I was riding Makazin, our friend who flew in from Maine, Kathy Brunjes on Bey, and another friend and client Carole on Freebie. All but Strut did the 75.

Katie was doing the 50 FEI on Strut to qualify for the Young Riders FEI Championship this summer.

On the way to the ride we gassed up and then grabbed a quick Starbucks and away we went. The drive is less than an hour for us so it was nice to get there so early. The road up there leaves a lot to be desired. It is very narrow and windy with long drop offs on the shoulder in spots. We took two trailers up and Carole would meet us up there later in the day with an RV.

We set up camp. Jeremy, Kathy and I as well as Kathy’s friend Biz. It didn’t take any time at all. Then we hung out and relaxed while we awaited Katie and Carole’s arrival so we could pre-ride.

Katie arrived but still no Carole. Carole thought she would be there around noon or sooner. Around 2:30 she arrived. It turns out the RV place ran really late and then she took Quimby road up to the ride which is EXTREMELY steep and windy. Part way up there was a sign that said absolutely no RVs but she had nowhere to turn around. Then she drove further than she needed to, by mistake, and ended up going up to the observatory, which is even more windy steep narrow road. She needed to relax for sure when she arrived.

After Carole recovered from the crazy drive we all went out for a ride. All 5 horses and riders looked great. We were ready to have a fun Saturday.

Carole made a great dinner on Friday night. We had blackened Cajun chicken alfredo with a salad and garlic bread. Very tasty. Then we all went to the ride meeting and went to bed.

Saturday’s ride started at 5:30 am. We were up and at ’em. We went to the start for our dress inspection and then the ride started. In the first few miles we spotted a large black galloping pig.

The views were amazing. On the first big climb there were views into the Silicon Valley. The clouds were lower than we were. It looked like the ocean with the clouds covering the whole valley like that. There was misty, foggy areas that we rode in and out of. Flowers were on the hills and the scenery was still green. When the fog lifted and the day warmed up there was a perfect breeze that kept it just right. We couldn’t have asked for better weather.

At the last vet check Bey and Kathy were pulled for a hind end lameness. Darn! We were having so much fun. Carole, Jeremy and I went around the last two short loops and this is where the rattlesnake almost took us out. He was huge, and coiled! Fortunately the snake didn’t get us and neither did the ground squirrel holes that were like land mines everywhere. The whole day we were yelling “Hole, Hole!”.

The three of us finished together, one two three. Jeremy, Heather and then Carole. Very fun day, with the exception of Bey and Kathy.

We were all in camp done with vetting and everything when Strut rode by to do his last 3 1/2 mile loop. He looked fine and was doing his thing. He and Katie finished and that is what she needed.

Tiran not only won but was awarded BC as well.  He is turning out to be pretty amazing. (This was his third endurance ride.)

While it was getting dark a large pig wandered into camp. The ranger saw it and tried to scare it away but the pig almost ran into a horse that was tied to a trailer and the horse pulled back and ran off. The horse was located an hour or so later about 5 miles down Mt Hamilton road. I think the horse was fine. The pig stayed in camp for the night.

Sunday morning I got up around 5 am to use the restroom and Makazin’s halter was hanging on the trailer with no Makazin. I looked and saw him about ten feet away. He had gotten loose and then proceeded to make a nest out of an entire bale of oat hay. He was sound asleep all snuggled up in the hay. It was very cute but a big mess to clean up as we had to pack up all of the hay.

Sunday we loaded the horses and headed back down the mountain. Another one down. Our next ride will be Wild West. We will be doing day one with the young stock. Stirgess and Tin Roof will do their first rides and our friends horse Congo will join the rookie ranks doing his first ride as well. All three of them are 5 year olds. It will not be their first races as they all three ran on the race track. Strut will go as the fearless leader to take them through.

For more on Reynolds Racing, check out their website.