We wanted to share a success story from Cathy. She has spent the past couple of years treating her horses’ chronic abscesses. She discovered they were abscessing because they were receiving too much selenium in their supplements. Cathy was able to use EasyShoes and Easyboots to make her horses more comfortable during their recovery.

I started having an abscess problem with both of my geldings (13yo and 20yo) in the spring of 2019. Skamp and Budd live outdoors at a boarding facility in Indiana with thirteen other horses, and they have both been barefoot for more than ten years now. The majority of my riding is on four to five day trail rides in the spring and fall. I will occasionally ride in a local arena or on nearby trails, as well.

I had recently switched barefoot trimmers, after my previous trimmer retired, when Skamp and Budd started abscessing. This new trimmer recommended several different supplements for my horses, including a California trace mineral, the Nutrena Empower Diet Balancer, and Omega Horse Shine. 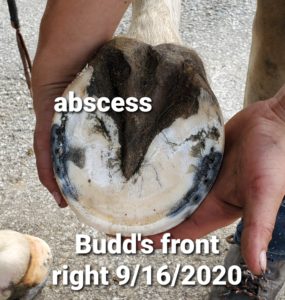 The abscesses continued intermittently for a year. Note that none of the other horses at the boarding facility had these continuous abscessing problems while grazing on the same pastures and eating the same hay. The horses had 24/7 access to hay and water.

In June 2020, the Purdue University Vet Clinic did some x-rays and determined that Skamp basically had no sole due to all of the abscesses he had experienced over the winter. At that point, we fitted him with a pair of EasyShoe Versas to protect his feet until his soles could heal. Skamp continued to abscess on his bulbs even when he was wearing the shoes, though. 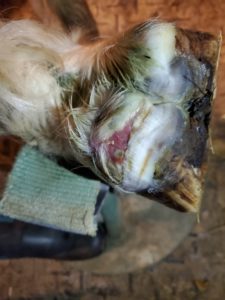 The Purdue Vet Clinic also ran multiple blood tests to determine if my gelding was insulin resistant, had PPID, etc. When every test came back within normal limits, a glucose tolerance test was performed. This test also came back normal. Purdue’s assessment was that both geldings had grossly underrun heels, leaving the back of their hooves extremely painful and vulnerable to bruising and abscessing. They recommended shoes and pads. 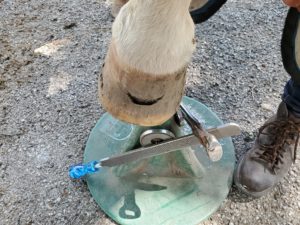 My other gelding, Budd, also wore the EasyShoe Versa for two trim cycles until his heels were back under him and the horizontal abscess right below the coronet band grew out.

I started doing some research and concluded that since it was only my TWO horses that continued to abscess, it must be the supplementation that they had been receiving for the last year. The geldings do not get grain. They get a small amount of alfalfa pellets mixed with their supplements. Except for a couple of older horses at the boarding facility, none of the other horses receive any supplements. They all seem to keep a good weight without any of the issues that I was having.

After closely researching the contents of all the supplements they were receiving,  I realized they were getting 4mg of selenium each day when only 1-2mg per day is typically  recommended. My research indicated that too much selenium can displace the sulfa bonds in keratin leading to weakness in hooves (and caudal tissue). In November of 2020, I stopped giving my horses any supplements, except for the Nutrena Ration Balancer.

Both geldings remained mostly sound through the winter, and as of this summer, in 2021, their feet are once again healthy and we were able to enjoy a wonderful camping/trail riding trip with our family.