With two weeks to go until Virginia City 100, I decided that it would be a good idea for Fergus to inspect the parts of the trail we would be riding at night during the endurance ride. Unlike Tevis – which is held the weekend at the end of July/beginning of August closest to the full moon – VC100 is held two weeks into September, moon or no moon – and this year there will be no moon at all.

Accordingly, Patrick and I took advantage of the three-day weekend and trailered Fergus and Small Thing over to Nevada for a pre-riding excursion.

Predictably we arrived two hours later than hoped for, but managed Part 1 of the Mission late Saturday afternoon – riding the bottom part of the 75 mile loop – the area where it would just start to get dark on the day of the Ride.

Fergus wore Gloves for the rocky trails, while Small Thing wore his Glove Back Country Boots. 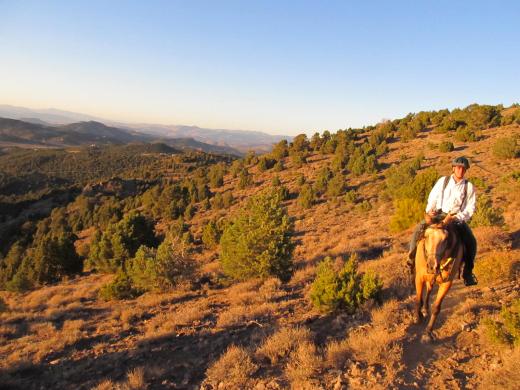 Patrick was pleased finally to get to ride his horse.

So much of Nevada is open land it’s sometimes hard to grasp – miles and miles of sagebrush-covered hillsides dotted with old mines. And roaming these desert highlands are bands of wild mustangs. 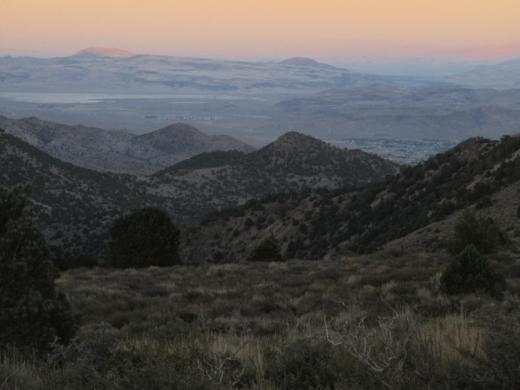 Looking out towards Virginia City as dusk approaches.

On our way up the mountainside, we saw a couple of groups from afar, but coming over a hill we suddenly came face to face with a herd of eight horses – four of them youngsters – right next to the trail.

Small Thing’s eyes got very big, but he kept it together – that was, until a couple of the more curious yearlings approached for a closer look. 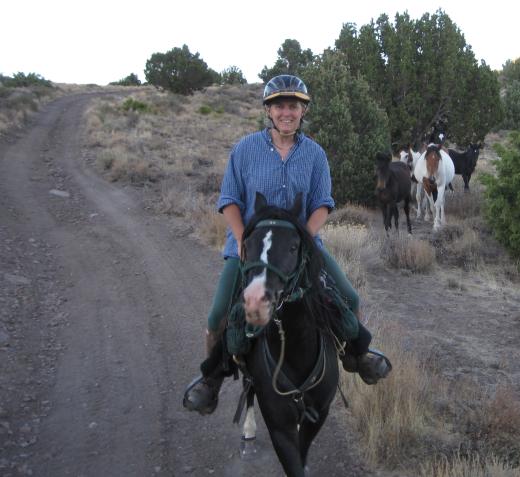 Looking at little wild-eyed as the babies come in for a closer look.

Thankfully they lost interest before Small Thing popped and we went our separate ways.

Coming down off the mountain, it began to get dark – just like the real ride, only this evening we were treated to a huge full moon to light us along the last few miles of our canyon ride. 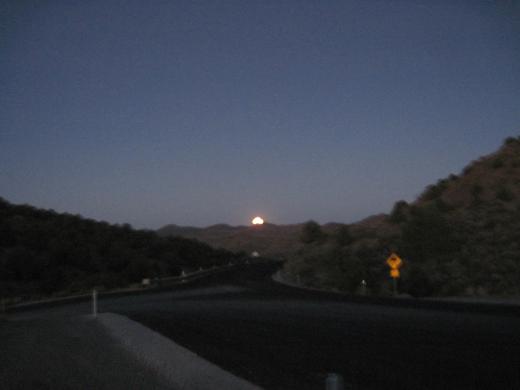 Moon over Geiger Summit – one of a couple of road crossings during the ride.

The next day we had big plans to get up early, trailer back up to Virginia City for Part 2 of the Mission, and drive home again in time for supper. But waking up at Washoe Lake that morning blew it all out of the window. The horse camp there is so pretty in the morning light, with the sun coming up over the mountains that we abandoned our plan and made arrangements to stay an extra day.

In the afternoon, we took the horses for a ride to the lake and played in the dunes. 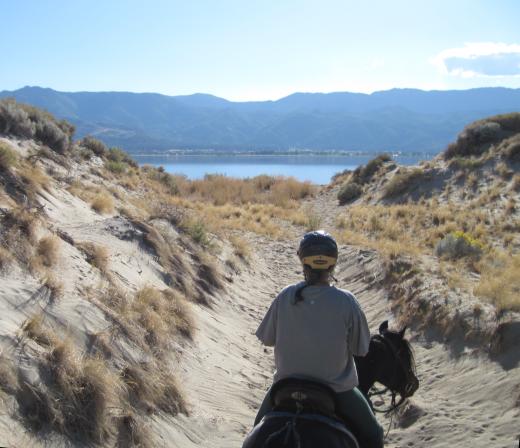 Fergus was still wearing his Gloves from the day before – what with the plan of getting up early and going riding, right? All we did was loosen the velcro straps overnight. I’d taken Small Thing’s Back Country boots off the night before, however, and didn’t bother to reboot him for this ride – Washoe Lake State Park is almost entirely sand, so perfect barefoot terrain. 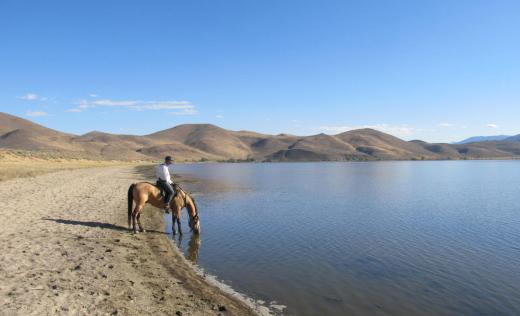 Our horses aren’t used to large bodies of water, so it took some persuasion to get them anywhere near the lake, but finally Fergus’ thirst overcame his fear. Small Thing, on the other hand, wouldn’t go closer than four feet – who knows what monsters lurk below. 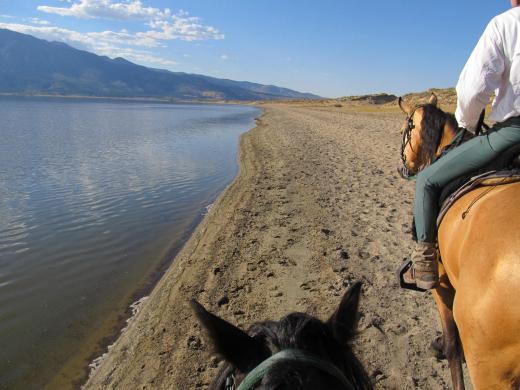 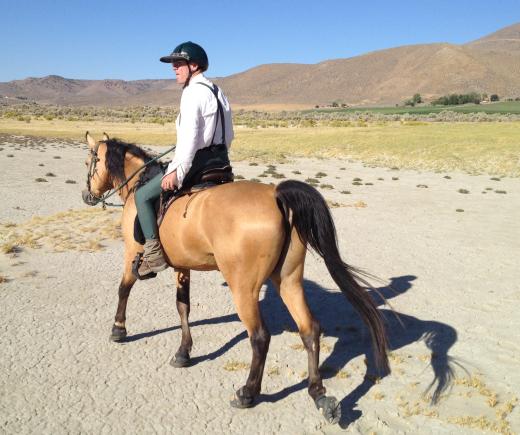 Fergus is still wearing size 2.5 Gloves on the front, and a 1.5 and a 2-with-powerstrap on the rear feet. 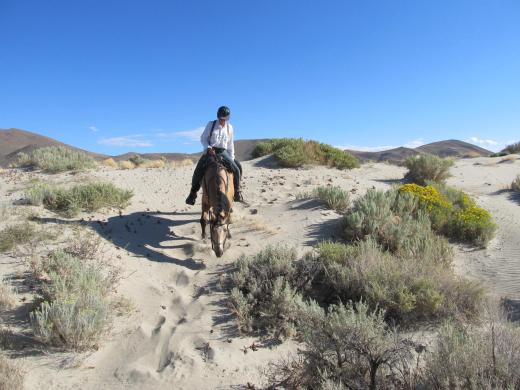 The main trouble with riding in soft sugar-like sand is the horses’ tendency to forget themselves and collapse without warning. In the photo above, Patrick comes close to going over Fergus’ head when his front end melted out from underneath him on a steep downhill. A swift kick in the ribs brought Fergus out of his trance-like state and reminded him that rolling while your rider is aboard isn’t the greatest of ideas.

Part 2 of the Mission was to ride most of the last loop of VC100 – Cottonwoods. Small Thing hasn’t done any work in weeks, so after riding 14 miles over the previous two days, with some good climbing and some deep sand, he didn’t get to participate in this expedition.

Some of this loop goes right through the middle of town but I decided we didn’t need to do that part because a) we’d be able to practise it the day before the ride as a leg stretcher, b) it’s lit by street lights, and c) riding through Virginia City on a Holiday Monday while there’s Ye Olde Tyme festival going on didn’t seem the brightest of ideas. Fergus is pretty steady, but let’s not test it to the max, eh?

Accordingly we parked at the old cemetery (spooky finish line for the ride – interesting when you pass by there in the wee hours of the night) on the north end of town and leaving Small Thing and Patrick to lounge in the shade, Fergus and I set off up the canyon.

Fergus was not amused. Why did Small Thing get to stand around and eat hay, while he, Fergus, had to go gallivanting about the countryside in the hot sun? As a result, there was plenty of peddling from me, and plenty of bellowing and swerving from him, but we finally got going. 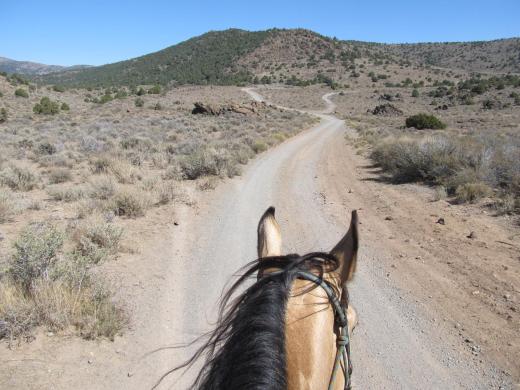 Long Valley Road – not the most interesting part of the loop, especially when you’re forced out there, all alone.

Fergus and I managed only to get lost once, which was a plus because it meant we came upon the water trough about 45 minutes before expected. We backtracked to the correct trail (much to Fergus’ disappointment) and continued on the lollipop at the top of the loop that brought us back around to the vet check area and the trough again.

Prior to this I’d only ridden this section in the dark, so it was a pleasant surprise to get to see the scenery in detail. 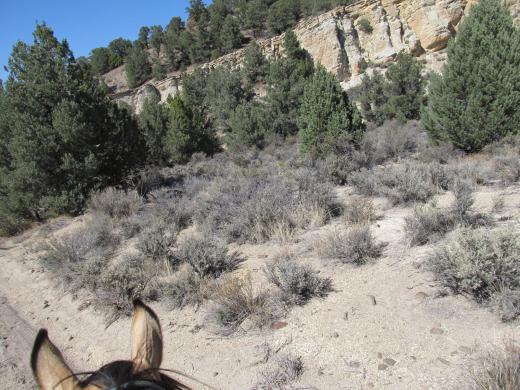 The chalk cliffs at the very furthest point of the loop 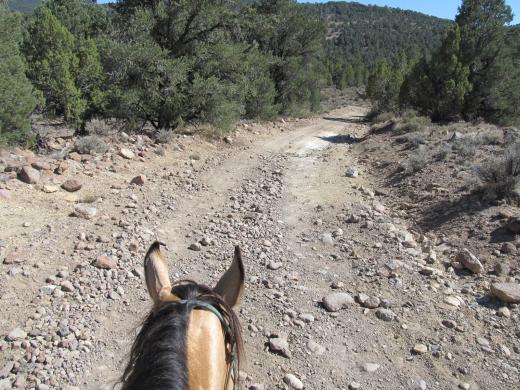 Fergus seemed a little foot-weary on the hard-packed dirt road, so I’m treating his feet for any lingering thrush. When we got done, I discovered that not only had he worn through the toe of one front boot, he’d also jammed a rock into the hole, so that might have accounted for his discomfort. The boot was probably a little past its sell-by date, having done two days on the abrasively volcanic trails at the Washoe Valley Ride (some shared trail with VC100) back in May, and been worn for every conditioning ride in the lead up to Tevis. The Nevada trails can be hard on feet, so I was glad for their protection.

Three hours after we set out, we once again crested Sign Hill and looked down into the canyon that leads to Virginia City. This 30-minute section is ridden four times in the dark, so I was glad Fergus got a good look at it. 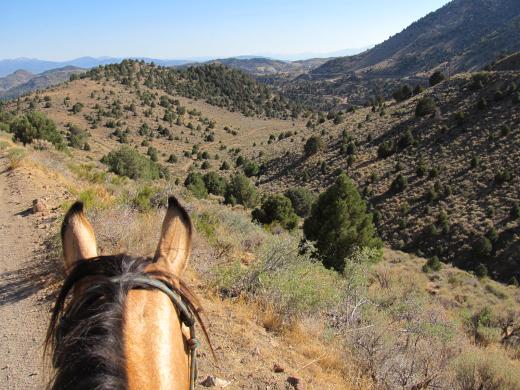 Our return to the trailer was punctuated by Fergus bellowing (and Small Thing shrieking from his perch on the hill-top), and trotting like a maniac (the most animated he’d been all day). We completed the 19 mile loop in three and half hours, so I was very pleased with him. On the day, I’ve allowed us four and half hours (considering it’ll be dark and we will have already ridden 75 miles before setting out on the loop), so I think we should be in good shape. 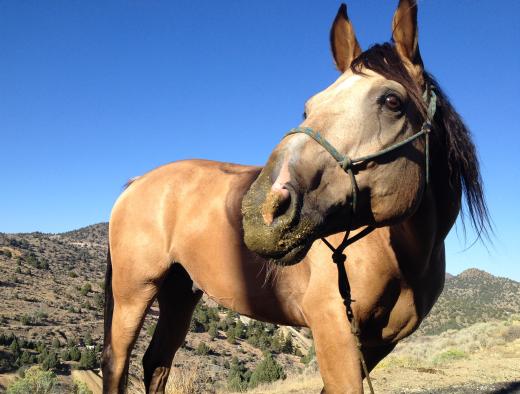 The noble beast finished his ride with a big pan of liquid slurpie. No kisses for him.