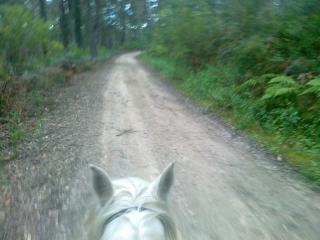 As I write this article, my 10 year old Arab gelding, Riley, whom I compete with in endurance is brewing his second abscess in five weeks. It has been an extremely wet winter in our part of the world and abscesses have been very common this season, much to my frustration. I’m playing a waiting game at the moment, waiting for it to burst. Our season hasn’t gone according to plan this year. We were attempting to compete in our first 100 miler in April, but this fell by the wayside as I felt he wasn’t quite 100%. So my next plan of action was to compete each month in 80km rides and attempt the 100 miler in October. Well it still hasn’t gone according to plan either. I haven’t been able to compete since April and therefore he just hasn’t been ride fit (or myself for that matter). I have sorted his issues out, but then we have had five weeks of abscesses. Hopefully I can finish the season out with the last four rides. You know what they say about the best laid plans?

When I have been able to train, we train in Gloves. These have been fantastic, and at last count I think I have about 30 boots (oops) all in different stages of wear – from 4wd boots (brand newies for competing, then training in mud), 2wd for some wet weather and slicks – summer only. I have just worn the toe out of some boots that at last count I believe have travelled at least 300 plus kilometres. I may even try to fill the holes with Sikaflex and rubber. I find they fit extremely well, but have found by adding power straps and or the Mueller tape they don’t often move in fast work. Funnily enough, if I do lose a Glove, Riley will always stop himself, even when travelling, and I don’t usually trash them. If I do, the local canvas repair shop will stitch the gaiters back up for me.

We have a variety of terrain we can train on in our local area, from sand to gravel to stone and, as mentioned, heaps of mud: fantastic for conditioning. The attached pictures show one of our 20km training loops, we share this with motorbikes and 4wds and has three awesome bog holes a few creek crossings and nearly half the track is uphill. 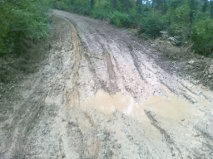 The Gloves didn’t move after tackling the bog holes, once I had persuaded Riley to go through, though he didn’t like that idea. He got over it and slipped and slid his way through with no dramas. A quick check showed the Gloves had not been sucked off.

Riley has been competing barefoot for five years since I have owned him. He is very opinionated, competitive, has a strong personality and doesn’t give up but is also very sensitive. In short, he has been very challenging to say the least. Six years ago I was bucked off on the road, landing on my knees and breaking both knee caps. One was held together with wire for 12 months and the other has pins, which remain in place. Before this I was a very active person competing in triathlons, mountain biking and horse riding. I was not able to ride for 12 months while the wire was in place and was required to learn to walk again. Being a bit stubborn, I decided I could ride after three months. That a mistake: the more I tried to do the more the wire moved around and dug in. It was a slow road commencing to ride again but feel extremely lucky and grateful I am able to compete in endurance with no ill effects. 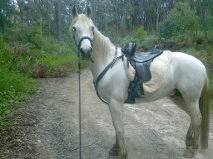 Well spring has just sprung here in Australia: the days are getting longer and warmer. We are all waiting in anticipation for the ground to dry out so we can put away our gumboots and get into our shoes without being in danger of them being swallowed in the mud and slop and getting back into some serious training.