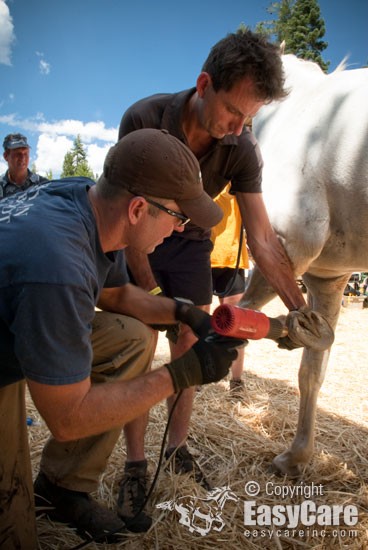 This week’s photo comes form the 2009 Western States Trail Ride, also known as the Tevis Cup. Garrett Ford and Duncan McLaughlin are preparing a horse’s hooves to be fitted with the EasyBoot Glue-On hoof boots prior to the race.

Last year, EasyCare brought a team to Tevis with the aim if showing the world that Easyboots and natural hoof care were not some soon to be forgotten fad, but a real alternative to iron shoeing.

We believed that if our boots could perform well in the Tevis Cup, widely regarded as the most difficult and most prestigious horse endurance race in the world, people would see what we already knew: Easyboots can handle just about anything a horse and rider can throw at them.

We brought boxes of Glue-On and Glove boots and offered to help riders competing in the race properly fit the boots to their horses. The success of riders wearing Easyboots was amazing, with over 70% of horses wearing Easyboots finishing the race. With an average finish rate of a little over 50% over several decades it’s hard to argue that Easyboots shined at the 2009 Tevis Cup.

Since then hoof boot success in endurance racing has steadily grown. Check out these incredible statistics from 2009, and then consider that 2010 is shaping up to be even bigger.

Our momentum continues to grow with new programs like our Ride Tevis for Free promotion, the EasyCare Gives Back to AERC campaign. It’s going to be an exciting summer!