At the end of September, Getty, my miniature horse, and I hiked 25 miles in two days on rugged, steep trails in Woodstock, Vermont, participating in the Green Mountain Horse Association’s (GMHA) Annual Fall Foliage Ride. We were the only hikers on the trail, since it’s technically a horseback ride. Because we have been training since June, we were faster than over half of the field of riders. A large part of our success depended on reliable hoof boots for Getty. Enter the Easyboot Minis! 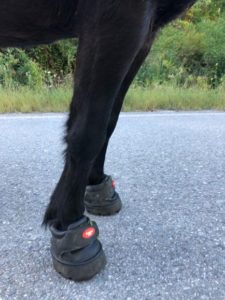 I have known Getty (as her farrier) for at least six years, and in that time she has struggled with chronic laminitis. She was purchased by a client as a companion for the client’s mare, who also struggled with chronic laminitis. At the time of purchase, both horses were moving to Ohio, but returned to Vermont a couple of years later. My suggestion for the horses was to manage turnout environment (no grass); diet (low sugar feed and addition of a supplement that would balance to the hay); and to include regular exercise, which would help circulation in the feet and keep possible increases in insulin levels controlled. Another recommendation was to have the vet draw blood to assess levels of insulin, glucose, thyroid levels, and leptin values; and to take radiographs of the feet to assess bone loss, distal descent, and possible rotation. Some of these suggestions were followed, but many were not.

Fast forward to 2021 when Getty’s owner decided it was time to find Getty a new home. From the first day I met Getty, she captured my heart. I think it was her affectionate nature and saucy attitude. When my client asked if I would take her, I couldn’t say yes fast enough. Soon after coming to live with me in May, Getty’s rehab began. Enter hoof boot management. As many booters know, managing a lame horse with hoof boots can be a full-time job, but like anything done in repetition, practice makes perfect.

Since Getty was in my backyard, I was able to trim her feet once a week. These short trim cycles enabled me to make changes rapidly but also incrementally. I reduced heel height, removed excess laminar wedge, and backed her toes. She lived in her Easyboot Minis for about two weeks full time before advancing to a 12-hour on, 12-hour off schedule. I used the 12 mm soft (green) comfort pads in the boots until we were able to begin our off-property adventures, which consisted of 4–10-mile hikes. Once Getty was completely sound, I used the 12 mm medium (black) comfort pad in the right front boot and continued to use the 12 mm soft comfort pad in the left front boot. Getty’s left front has the most bone loss and remodeling. She seems more comfortable in the soft pad on that foot. 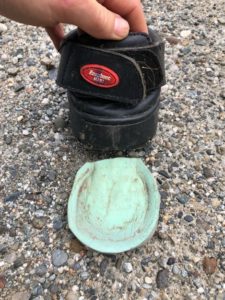 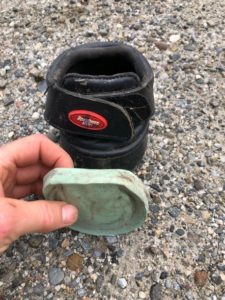 Outfitted in her Easyboot Minis, Getty logged miles and got fit. Every weekend we explored local trails and old logging roads in prep for the Fall Foliage Ride. We hiked through mud, tall grass, streams, and rocks. Her boots have held up to the challenge.

Soon I will need to change out the old comfort pads for new ones. Other than that, the boots are standing up to the test. The stitching is intact, Velcro is holding firm, and the tread hasn’t worn down. Getty is one mighty mini, but is even mightier in her Easyboot Minis.

Success with the EasyShoe Sport