Uno has been trying out some of his new-found confidence recently. It’s good to see him blossoming into a “brave horse” (read “a horse that doesn’t have a melt-down when a leaf rustles”), but I’m less than thrilled with some of his attempts at emancipation.
You may remember that at 20 Mule Team 100 when we were out alone in the dark he insisted that he wasn’t able to trot any more for fear of Attack-Bushes. At the time I didn’t have a problem with it since I figured he was legitimately mentally-tired and had done a lot that day.
However, objecting to trotting when you’re out in broad daylight, after a four week vacation, and having only gone two miles down the trail is less acceptable. I explained that, no, “Uno deciding the speed” wasn’t going to be part of our future modus operandi and he better get a move on. He obliged.
The next display came when he refused to get into the trailer for a ten-minute trip down the road. I could hardly blame him when I thought it through. Unless we’re going on a long trip, I don’t usually put shavings in the trailer – and of course his most recent experience with “long trips” was our 13-hour jaunt home from 20MT. Dull, dull, dull, especially when you’re a horse who refuses to eat in the trailer.
But recently it had been raining and the water seeps in under the doors making the floor slippery so I threw in some shavings to stop him sliding around on the rubber mats. Confronted with a shavings-filled trailer, I’m guessing he put two and two together and came up with:
Shavings in trailer = Uno suffers from extended boredom and balked. Out came the “tapping stick” and we proceeded to work through John Lyons’ Loading 101 – and after about five minutes he decided that, yes, he probably could get in the trailer after all (relief from Lucy).

The next example came in the first 20 feet of this Saturday’s NV Derby 50. I made the mistake of becoming distracted by my tangled tailing rope and Uno took advantage of this by performing a 180 back towards camp, much to the consternation of the poor rider who was trying to come out through the gate as Uno bounded towards her at speed.

So by necessity, Uno is being cut a lot less slack than usual. 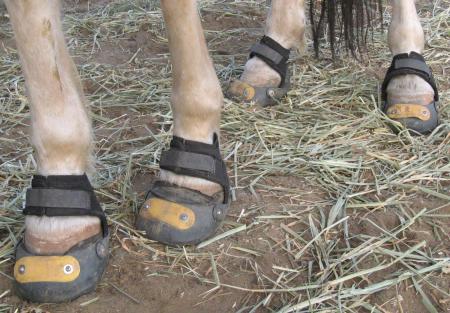 Saturday’s 50 mile ride went very well. I’d trimmed Uno the weekend prior but checked the fit of his boots on Friday afternoon to make sure he hadn’t grown out too much. Spring must be here because he already looked long to me, but I decided to leave his feet alone not wanting to get carried away. Later that evening, I liberally wrapped his back feet with athletic tape and whacked on his rear Gloves.

Long ago, Uno investigated the velcro tabs on an Easyboot Boot Epic and discovered that, yes, they do come off if you yank on them with your teeth, so I waited until the morning of the ride before putting on his front boots. It was pretty much a no brainer – pick out his foot (always filled with fresh manure, guaranteed), scrape any remaining crud off the hoof wall, wrap enthusiastically with tape (to ensure it’s much harder to get the boot on – great idea, Luce), and whack the Glove on with a rubber mallet. 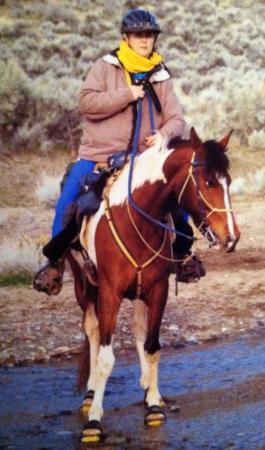 Lucy looking suspciously like a potato, all wrapped up against the NV wind.
Uno looking a lot more attractive, sporting his yellow PowerStraps

The only upkeep needed during the ride was a quick check under the gaiters at various holds/vet checks. To do that, you just need to unfasten the velcro, flip the gaiter down and brush out any debris that has collected in there. I found some grit under one gaiter at the first check (keeping in mind we’d been riding in sand for 15 miles), and a little more under a different gaiter at a 30 mile inspection when we stopped to let them graze. That was about it. Not exactly high maintenance.

It seemed like half the ride was in loose sand, while the other half was on long, hard dirt roads. I was pleased to have the added cushioning against concussion on the dirt roads. 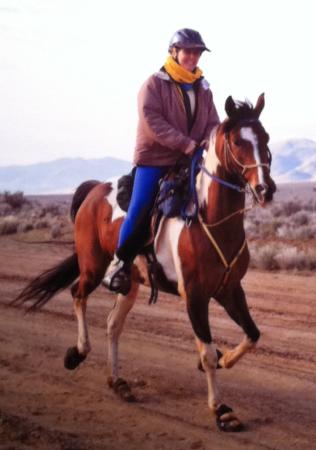 Pounding down the dirt road. Can you spot Uno’s saddlebred side?

The other enjoyable aspect of this ride was getting to hang out with two friends – both of whom were also sporting Gloves – one an old hand, while the other was trying her first barefoot + boots ride. 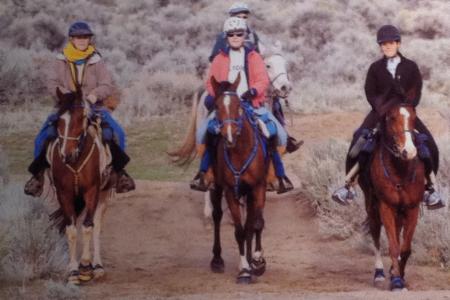 Lucy and Uno; Tami Rougeau and May; Renee Robinson and Little Bit

Mission accomplished. As usual, we finished near the back, but I was gratified to hear the vet comment to her secretary how good our horses looked. Once we got out there (away from the magnetic lure of camp), Uno had a lot of fun running with his buddies.

So Uno and I had fun on Saturday, but I had a heavy week at work coming up so opted to sit out Sunday’s ride. Tami and Renee, however, went out and completed another 50 miles in their boots. Their horses both looked great at the end… the riders, not quite so good 🙂

The NV Derby is the first ride of the NASTR Triple Crown which Uno and I managed to finish joint 5th in last year and we’re going to try again this year. It’s a competition of attrition – the trick is keeping your horse sound and well all year long – the next ride in the series is NASTR 75 in June, followed by Virginia City 100 in September. Fingers crossed.