Another Skeptic Converted to Barefoot Grinder Trimming by Carolyn Dierksen

The story I would like to tell you here is about a new method of hoof care, introduced to me by Phil Morarre. I first met Phil through my roommate, who had recently met him socially (she doesn’t have horses). Phil and I spoke on the phone and, after a few email exchanges, it was clear that he was a man with a mission: to remove the shoes from as many shod horses as possible, return their hooves to a more natural state that would facilitate circulation, and consequently improve the overall health of the animal (or so he claimed). I needed more than just his word to be convinced.

We had discussed my horses during our phone conversation. There’s Cassie, Arabian mare, age 27, whose arthritis had posed such a problem for my shoer that he had only trimmed her front feet the last two times. It was one of those mysterious lamenesses that no one could figure out. I had just about reconciled myself to the fact that she probably wouldn’t be with me come winter. Then there is Razlen, Arabian mare, age 7, who was on her third set of shoes, and seemingly doing just fine. Phil expressed a real interest in Cassie, even over the phone, and asked if he could see her move to evaluate the problem. My shoer was leaving the area anyway, so I thought I’d see what Phil was all about.

When the day came for our first meeting, Phil had arranged to have another woman join us. She arrived at my place with a lovely big event horse, and she and I had an opportunity to talk before Phil arrived. She told me she had attended several of Phil’s seminars and was learning to trim her horse herself. She lived rather far from Phil’s regular route, and was there today to have Phil check her horse and let her know if she was correctly applying what she had learned.

Well, Phil arrived right on time, and I was a bit surprised. On first impression, Phil doesn’t look like the stereotypical farrier—fitting, actually, because he isn’t stereotypical nor technically a farrier. In a lineup, you would be more likely to pick him out as a country western or bluegrass musician—also fitting, because he is, at least when he has time. But spare time is scarce for Phil these days, mainly because of that mission I mentioned earlier.

After brief introductions Phil casually asked if I had an extension cord handy. I went to fetch one, assuming he was going to sharpen a tool or something. Well, imagine my surprise when he whipped out, of all things, an angle grinder, plugged it in, and started working on this woman’s horse’s feet! A thought crossed my mind: “No way is this guy going to touch my horses, today or any other day.” 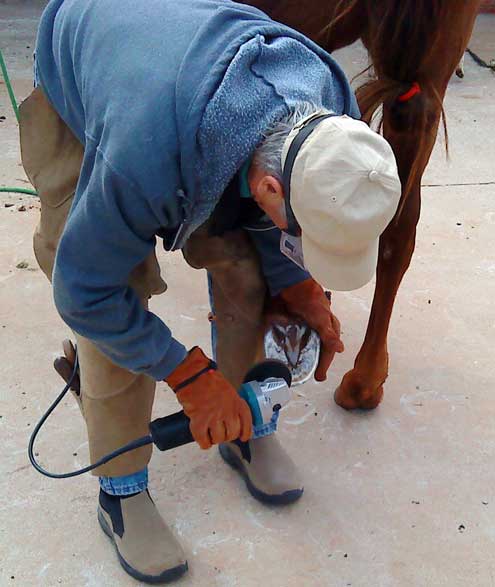 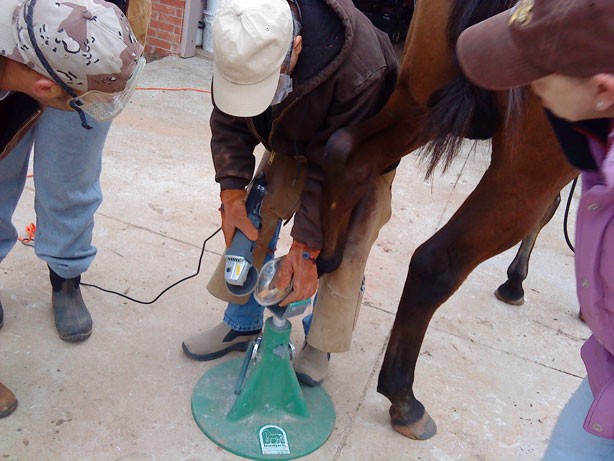 As Phil worked, I stood nearby, listening to him explain to my new friend what she was doing correctly and what she needed to do to achieve a better trim. (Did I mention that during this very noisy procedure that generated clouds of hoof dust, this Thoroughbred mare stood placidly, never moving a muscle?!) I listened and watched and found myself being sucked in by Phil’s knowledge and enthusiasm. What he was saying made sense. Soon the mare was back in the trailer and on her way home, and I went out to catch up my old mare. Phil looked the mare over, watched her move a bit, and said he’d like to see if he could trim all four feet and give her some relief, especially in her hind legs.

He said she dragged her toes enough to wear them down, but her heels were getting long, and she was out of balance. I warned him that the old girl still had some life in her and that she hadn’t even been clipped with the electric clippers since 1997. Undaunted, Phil went to work, whirring and grinding and generating lots of hoof dust. Cassie never moved a muscle! I noticed immediate improvement after that first trim.

Next came the young mare, Razlen. She had lost both hind shoes in a fence, along with some hoof. Long story short, Phil convinced me to leave her barefoot, at least until her hind hooves grew out enough to nail a shoe to. He then brought out yet another electric tool, a commercial-sized Dremel with a flexible shaft, and proceeded to grind off the clinches on the nails of her two remaining shoes. He explained how this would completely remove the clinches, making it effortless for him to pull the shoes and not strain the mare’s joints
in the process. He was right; the shoes practically fell off. Next, Phil fired up the old grinder and went to work. To my utter surprise, Raz, a generally nervous sort, never moved a foot!

I mentioned to Phil that I was planning a rather long trail ride in a few days. He loaned me a pair of Boa protective horse boots, thinking Raz might be tender on the trail at first, but I never had to use them. I did avoid crushed rock when I occasionally came across it, but she was fine on natural rock on the trail and smooth stones in the creek. 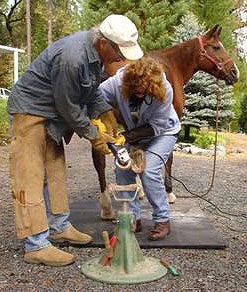 Six months and five trims later, I’m thinking both my horses have definitely seen their last set of shoes. Raz is completely sound on any terrain, and Cassie is not only moving 100% better, but has even lost her wind puffs.

So, now that Phil has made me a believer, I want to make believers of everyone else. The fact is that most of Phi’s customers are referrals; happy customers spreading the word to horsey friends. I’ve already given Phil two new, very happy clients, myself.

Now you’ve probably chuckled your way through this article so far, and I have to admit it still seems a bit strange when Phil pulls out his tool chest, containing a hoof pick, hoof knife, and power sander. Actually, there’s a pair of nippers in there along with a rasp or two, but he says he rarely seems to need them, and there’s no anvil hidden in the back of his truck. I know because I looked! But now I know the natural method is more than just a gimmick! There is sound theory behind this method, and many case histories to verify it’s effectiveness—something Phil is sure to tell you, if given the chance. I, for one, definitely plan to attend one of his clinics this Spring. According to my new friend with the Thoroughbred, Phil’s clinics are very rewarding.