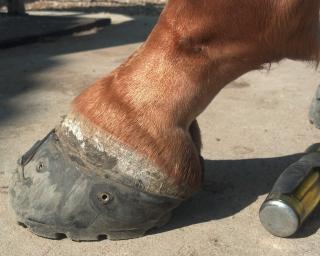 This blog should peek the interest of Easyboot users like me; you use a lot of Gloves, you love using Glue-On boots and are comfortable gluing boots on on a regular basis with assistance, and you wish you were comfortable doing it alone.

I’m not entirely proud of this method but hey, it works, in fact it works really well. I’m also sure others have done this but I want to make sure everyone knows it’s an option, even if it’s not as pretty as the classic glue job.

When I need to glue boots on, I enlist the help of my husband: literally for his hand strength. It’s strange really because I have, on many awkward occasions, been complimented or high-browed (for the lack of better words) for my hand strength. I grew up on a working ranch, working horses and doing everything else that goes with the territory of raising cattle and making hay; I’ve got strong hands… for a girl. But on a 90 degree day, I fail to win the race against time with Adhere (I think half the problem is also mental, or “frenzy syndrome,” which is also associated with, but not limited to, my gender.)  I just can’t squeeze the gun fast enough to get the job done. I make it through one hoof like a champ and then my hand falls off.

So I trim the horse (I use a hoof jack to save my back,) prep the hooves, lay everything out, put the goober glue in bottoms of the shells, then call Sean in for back up. Sean squeezes the adhere into the shell and hands it to me, I do the classic smack’n’twist, and move expeditiously to the next hoof, at which point Sean is handing me another shell and we make our way around all four hooves. After squeezing Adhere in the last shell, Sean kneels down and puts a bead around the top rim and I follow, hoof-by-hoof, smoothing the bead and tidying up with my ever-shedding-latex-glove-clad-fingers. We do this Merry-Go-Round-and-Round the horse often. It’s a delicate, planned and well-practiced dance, very carefully executed. We know the drill. We often only use one mixing tip for one horse, and it very rarely goes awry but there is the occasional horse-related interruption or adhere tube switcharoo. 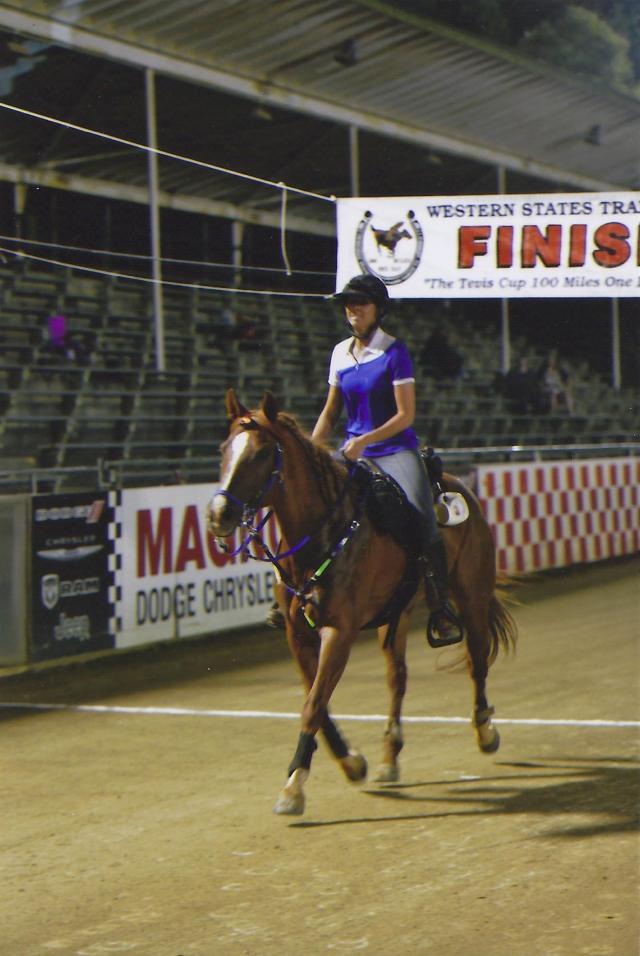 Moxy and me finishing Tevis 2012 with all four Easyboot Glue-On boots firmly in place, they were still difficult to pry off 3 weeks later. Proof of a successful gluing operation/Merry Go Round dance with my husband.

So here’s my ghetto alternative, aka “goober booting it.” Pick out some of your fairly-trashed-yet-usable-Gloves (the sizes you need, obviously,) and wash them up, scrub them out, set them out to dry, perhaps even spray alcohol in them to ensure they are as clean and dry as you can get them. Fear not, they don’t need to be surgically clean, just relatively clean. Prep your horse’s hooves, set everything out, but add a popsicle stick to your tool kit. Do your usual triangle of Sikaflex on the bottom of each boot, plus a ring on the walls (have a seat on a bucket while you work, take your time, it’s Sikaflex, not Adhere, so chill.) Now take your popsicle stick and use it to paint/smear a thin layer of the Sikaflex on the walls where you would usually put Adhere. Pop them on the hoof like you always put Gloves on; tap the toe in, put the foot down, put the velcro straps on tight.

Be aware that the wet glue also acts as a bit of a lubricant at first, so the boots are more likely to slide around on the hoof or twist. Don’t panic, this hoof glue is very forgiving. I hung out with my horse for that first hour (drink a beer, do some chores) to make sure things stayed straight and there were a few times I thought the hoof was twisting or sliding back in the boot (so his toe wasn’t quite all the way in,) but I just picked the hoof up and banged the toe back in to the front or twisted it straight again. The glue is still wet, it’s no problem. I was surprised how well it went. I found that after an hour, the thin layer around the hoof wall was fairly set up, so I put him in his run for the night. He did his usual in there, standing to eat, pacing, twisting, whatever, it was nerve wracking but the next morning the boots were on perfect. The glue set up over night, and they looked great.

From there I just unscrewed everything and removed the gaiters. And voila! Glue-On boots minus the frenzy-associated adhere set up time. 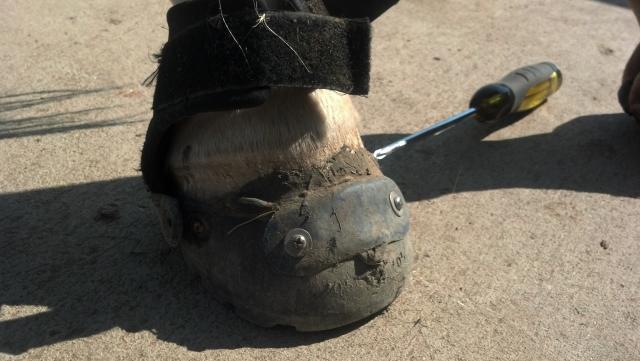 You can leave old power straps on or rip them off. 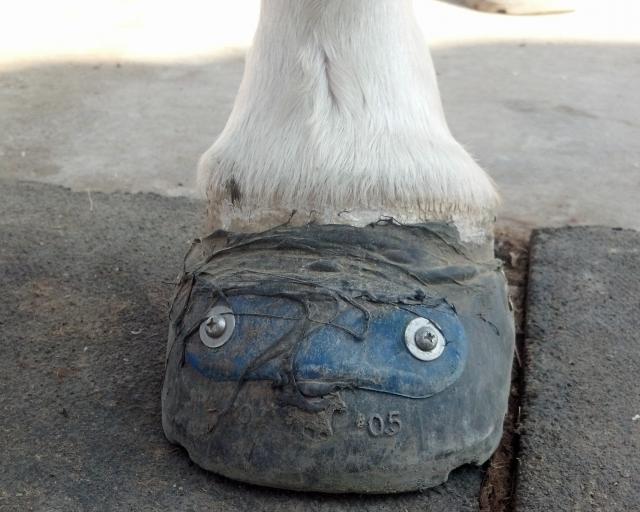 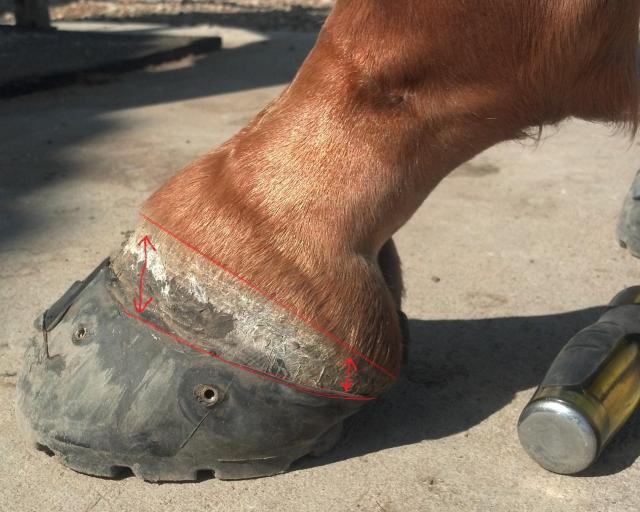 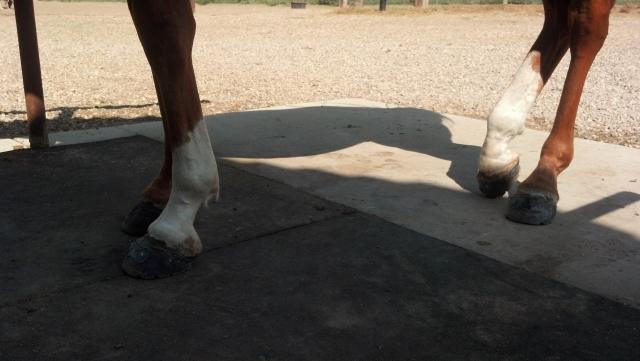 The cool thing is now you have a pile of spare parts to recycle for your other Gloves, and you didn’t even use any of your new Easyboot Glue-On shells. So technically this process is green. Go green baby! 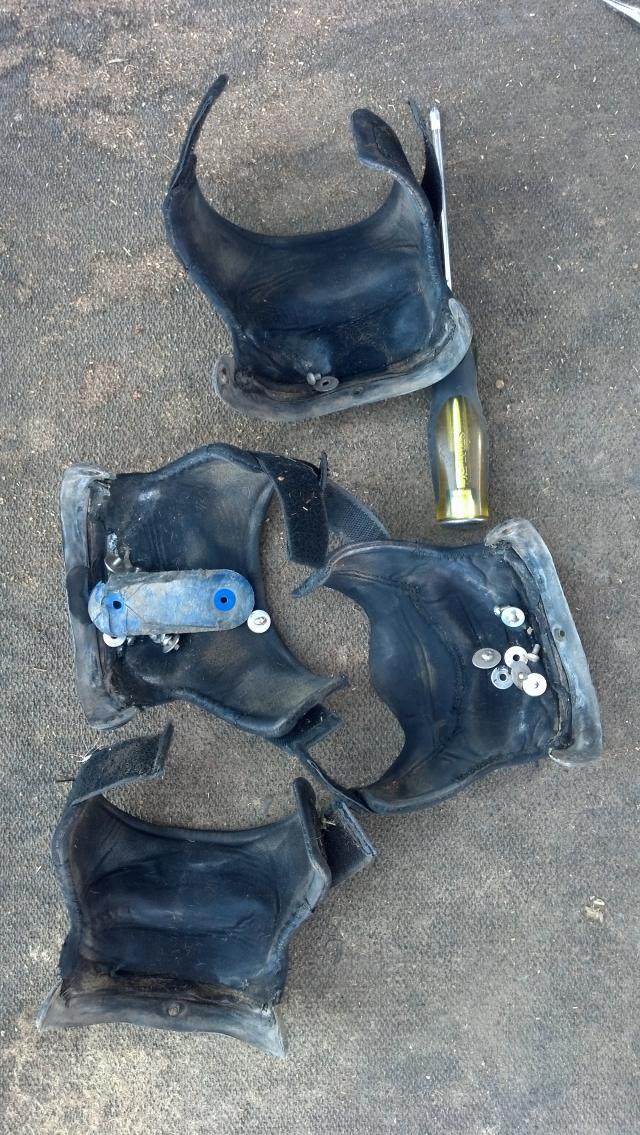 I do not recommend doing this on horses that will paw or jig, this method simply isn’t an option for bajiggity horses. In fact, I took my horse for a workout ride, washed him off, and then trimmed his hooves etc.  and once I had all the boots glued on I fed him so he would stand there calmly for an hour (consider doing this whole drill where the horse usually stands and eats if he is nervous).

I definitely recommend the classic glue on procedure, but in a pinch, “goober booting” is an excellent alternative.