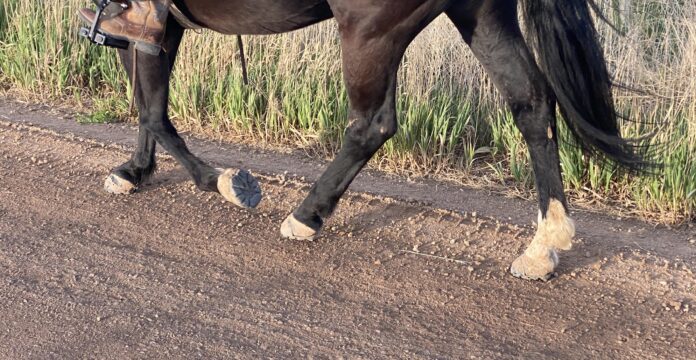 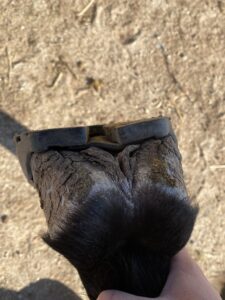 The Easyboot LC’s on the front hooves worked great!

-They stayed on as long as I wanted them on.

-They provided comfort and protection for my horse’s feet.

-They stretched as her hooves grew.

-They allowed vertical, independent flexion in her heels.

-The tread wore well for the type of terrain I was riding on. 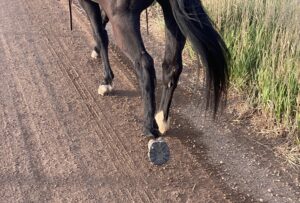 The Easyboot Flip Flops on the hind hooves came off two weeks after application.

A few things that contributed to the boots coming off prematurely:

First, the Easyboot Flip Flops I used had been sitting in the barn for a long time, I think years. Although they looked to be in good condition, I believe age does affect the quality of the product. This fact, and the fact that they definitely got dirty, despite still being in the bag they came in, negatively affected how well the glue was able to connect with the boot.

Second, I probably didn’t use enough glue. I prepared the hoof wall the same way I did for the front hooves, and the LC’s stayed on for five weeks. I am concluding that the difference in the amount of glue I used was a factor.

Third, the horses broke out of the pen on a day when we were irrigating the pasture, meaning some of the areas they were in were muddy. On top of that, they were enjoying their freedom and ran wildly around the pasture refusing to be caught. I believe the mud and water helped loosen the glue connection.

I am happy with the performance of these boots overall, and I look forward to refining my gluing technique and trying again!