On April 9th 2011 the inaugural Buchan Tall Timber 100km Endurance Ride was held in Gippsland Australia and run by one of the Team Easyboot 2011 Members Susan Gill. In conjunction, a 20km Social ride and a 40km and 60km Training ride were also held.

Arriving at ride base Friday afternoon it was a stunning setting with manicured lawns but still plenty of grass to pick for the horses. Traveling with three friends, two of which were planning to ride the 40km event and two of us the 100km elevated ride, and all with horses sporting Glue-Ons or Gloves we set up camp and settled in for the night. 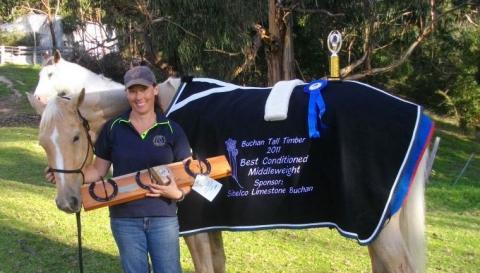 At the pre-ride talk we were advised the weather was predicted to be slightly warmer than the previous week had been, which had unfortunately been a week of temperatures cold enough to have the fire lit at home and full of rain. No one predicted though the temperature to rise on ride day into the low 30’s (Celsius). Setting off at 6 am with cold feet, hands and noses; within a few hours we started peeling off the layers.

On each of the three legs you traversed the first and last 6km stretch each time which was a short but descent climb up at about the 1-2km mark. This meant that we had to cross the river 6 times throughout the day in this event at the start and finish of every leg. I was so glad that the track remained dry and it wasn’t raining as a few of these climbs would have been a little treacherous if it had with the clay type surface underneath. The entry and exit points of the river held up extremely well to the horses coming in and out of it and I did not have one slip in that mud with the Glue-Ons.

The first 40km leg had some fantastic long climbs in it which I loved and Jack moved along up them happily. His Glue-Ons did not budge as he powered and pushed his way up those hills. The second 40km leg was a little less hilly but had its own challenges with Jack losing a little motivation seeing some of the same track again but would perk up when we would get to a new unridden section through the bush again. By this time the temperature had really heated up and we were strapping the horses with water at every checkpoint we came to.

They were also incredibly hungry by now and were eating and drinking superbly on track. By the third and final leg which was a 20km short loop mostly through the bush Jack already knew the way through the first 6km and I didn’t even have to direct him at the turns (I do think though sometimes endurance horses seem to recognise our arrow markers on track and follow them themselves). It was still very warm out on track at this point but sections of cool strong breeze were a blessing when we came to them.

Getting to the last checkpoint we knew we only had around 10km to go until we were home. At the last steep downhill section we got off and led the horses down, not wanting to risk injury to tired hamstrings so close to finishing and hopped back on for the last 1km across the flat paddock and back to ride base. By now at ride base it had cooled down a little and not a lot of strapping was needed and Jack vetted through beautifully with big smiles from the vets.

I am incredibly proud to say that Jack (who is a 10yr old QH x TB) won his division with fantastic results in his log book. That night he was still full of beans and could have gone out again. With the heat he dropped more weight over the days following the ride than I would have liked him to, but energy-wise I couldn’t fault him. All weight has been put back on within the week post ride

On another note I have to say that evening post ride to be able to sit down after a day in the saddle to the supplied lovely roast dinner in the hall and cheesecake dessert was a perfect way to finish the day. But then the next morning to walk into the smell of bacon and egg breakfasts and coffee ready for us during the presentations was even better.

I am very excited to say that Jack’s results for this ride were:

1st Middleweight
Best Conditioned Middleweight
1st Teams event (4 horses to a team and 3 out of 4 horses in our team wore Gloves or Glue-ons and we were the only complete team to finish the ride)
1st GERZ (local club) combination across the line.