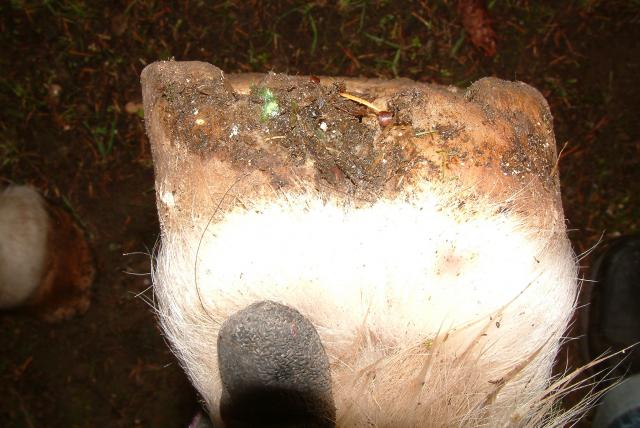 Lateral or medial imbalances are fairly common and a symptom of uneven hoof loading.  To treat them properly, it’s important to understand the cause. The load is dependent on a horse’s conformation and muscle influence and results tend to be rather predictable. Legs that toe-in tend to flare more to the medial sides, while toeing out creates hooves that flare more to the lateral sides. Exceptions to the common trends are usually horses that experienced some trauma in the past that affected conformation and/or muscle health and thereby hoof load.

Although flaring is often identified from the front or back of the hooves with the horse standing on level ground, it can also be seen in the angles of the collateral grooves. One collateral groove usually has a steeper angle than the other and the one with the shallower angle is the side that normally flares.

Hoof form responds primarily to load from above and hooves are rarely (if ever) loaded evenly. Typically one side makes ground contact first before the other side “touches down.” The side that is loaded last is the side that tends to flare more. This is easily observed by walking a horse on a level surface. Closely watch how the hooves become loaded as the horse walks towards you. The more flared side is usually the side that needs additional trimming, while the first loaded side is often close to the right height.

Frequent trimming is crucial to keeping these imbalances to a minimum – balanced hooves are beneficial to the horse and allow for proper hoof boot fit. It’s even more critical with hooves that naturally flare more or unhealthy hooves that have disconnected wall growth, which leads to excessive flaring. Hoof shapes/flares can vary widely depending on individual hoof load tendencies. Unhealthy hooves, with disconnected wall growth, will also have generally more wall/white line separation on the primary loaded side.

Equine side dominance with conformational traits like chest or pelvis width and leg length influence hoof load too. The non-dominant leg tends to get pulled in more toward the midline, thanks to stronger adductor (chest) muscles and weaker abductor (lateral shoulder/upper arm) muscles. This is very common in horses, especially in undeveloped horses. The wider the chest and shorter the leg, the more the lateral edge of the hoof becomes loaded. In extreme cases, this can cause rolling under (collapsing) of the primary loaded hoof side.

It can also be seen in horses whose hind legs are wide in the hocks and narrow at the hooves (base narrow). I see this particular issue more frequently in minis and halter type Quarter Horses due to their conformational tendencies. Proper muscle development that results in even strength on both sides of the body is the only way to effectively address this issue as it encourages more even hoof load. Most horses seem to be right sided, some are left sided and some are more ambidextrous, just like humans are. The ambidextrous horses tend to naturally have more evenly sized front hooves. A dressage rider once confirmed this connection. As her horse moved up the levels in dressage his hooves became more even in size and shape. 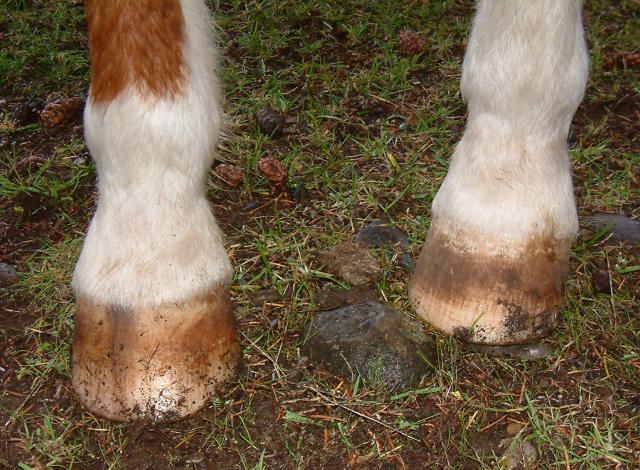 An equine’s stance can make the hooves look more uneven than they actually are. I have frequently taken legs that are base narrow on horses with wide chests and set them so the horse is standing more squarely. It will make the hooves look comparatively normal and shows what even load looks like. If such a horse would consistently travel correctly, the hoof form would also be more balanced side to side with less flaring tendencies.

After the trim and with legs placed in an aligned position in relation to the body: 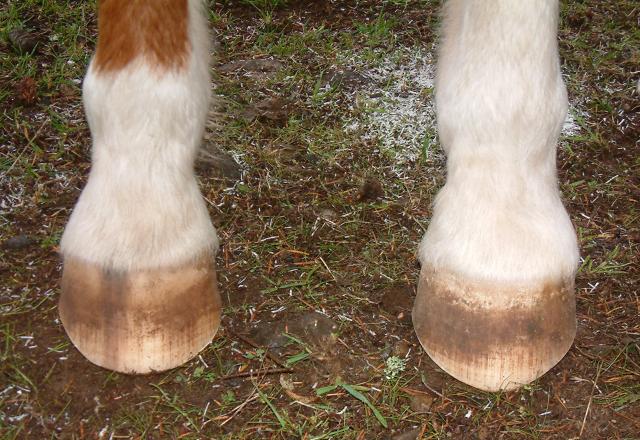 In general, small hoof imbalances should not be cause for great concern if they are managed in a timely and consistent manner. Fortunately EasyCare offers many products in several sizes to offer a good, functional fit even if hooves vary in size and shape.