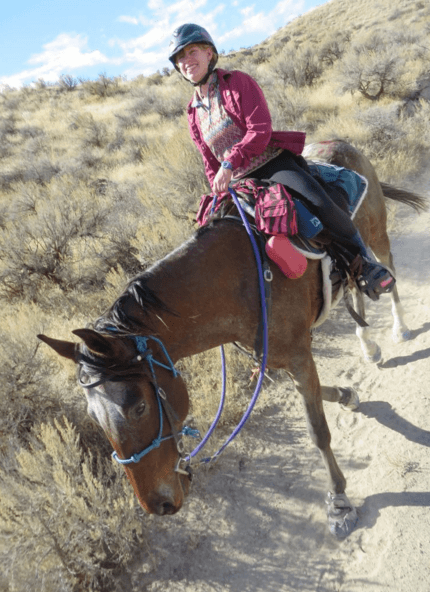 While the Easyboot Gloves are normally my “go to” boot, the Easyboot Epics were what honestly gave The Big Brass the chance to prosper. When I got him his hooves had never seen a hoof rasp. Heck, you couldn’t even touch the horse let alone pick up a hoof! Then with time, I worked at rehabbing his dreadful hooves. There were old abscess pockets, extremely thin hoof wall, a lot of separation in the hoof wall, a misshapen hoof capsule, and the list goes on.

Yet in order for this horse to begin to accept people, develop trust and be ridden, he required training. And that required hoof protection. Now even if I had wanted to shoe his hooves, the hoof quality was so poor that they never would have held any nails, so that simply wasn’t an option. We tried the Gloves first, and he would twist out of them and they would just go flying as he tore the gaiters off. Gluing didn’t work because we didn’t have a decent surface to glue to. And so we adopted the Epic, and because of it’s cable system, I could cinch it down pretty tight.

Thanks to the Epic boots we were able to continue with Brass’ training. And also with the help of others, Brass was salvaged from an uncertain future and was becoming a darn nice trail horse.

As I kept working on his hooves, the shape, balance and hoof wall slowly improved. Keep in mind it takes at least a year to grow out a new hoof. I switched Brass over to Gloves with a Power Strap to help hold them in place last year, as he doesn’t really fill them up. Yet to go a size smaller doesn’t work either. This worked pretty good for awhile, but as we trotted more, the Glove on the left front would begin to turn, creating an unfavorable breakover. I solved the spinning by putting a squirt of Sikaflex in the bottom of the Gloves, but sometimes I wasn’t able to plan ahead and “Sik” them on. So it was back to “the old reliable” boots, the Epics.

With the Epics, Brass was able to do ride after ride last year with his Junior rider, Beth Nicholes. The Epics stay where we put them, mile after mile regardless of the terrain. Together, that being Beth, Epic boots, and Brass, they achieved Pacific Northwest Endurance Rides (PNER) Top Junior points and Best Condition Junior horse, plus AERC Regional Junior honors, and Brass is over halfway to his 1000 miles.

All of which was thankfully an Epic save!