I knew 2009 was my little mare’s year for Tevis; she was tough, mentally and physically, and she had taken to endurance like the proverbial duck takes to water. We had only gotten started in endurance in 2008, but she was 15, I wanted to give her the chance to prove what I knew she could do, before she was too old. Gypsy, foaled as a back yard horse here in our little cowboy town, deserved a chance to show her stuff.

I did my homework and prepared for THE RIDE on August 1, 2009. I have used hoof boots for over five years on all my horses. I’ve tried several brands. Gypsy went great in the Epics, but at times I struggled with the buckles. I ordered a pair of Gloves for her back feet as soon as they were available, since fiddling with the Epics and the buckles really annoyed her. Wow. The Gloves were easy to apply and they stayed on. I never taped or anything! We trained hard all spring, and I tried to wear out the Epics on her front hooves. Eventually I gave up and just ordered the Gloves.

There is no going back! We used the Glue-on for three 50’s in eight days in the spring, and I was impressed with their performance. When it came to booting options for Tevis, I knew they were the ones. No question. The traction, security, and protection they offer is unsurpassed.

Garrett and Christoph applied them on Tuesday in Auburn, a few days before Tevis. Gypsy was confident, surefooted, and comfortable over every mile of the trail. I watched steel-shod horses scramble and lunge up Cougar Rock with little traction. Gypsy just trotted up and over. I watched sparks fly in the dark as steel-shod horses skidded on the streets of Forest Hill.

We completed the ride at 4:45 in the morning, and at the post-ride vet check, the vet said Gypsy moved out as well as any horse they had seen. Thanks, Garrett, and the Easyboot team for creating such a great boot that helped us complete the ride of our lives! 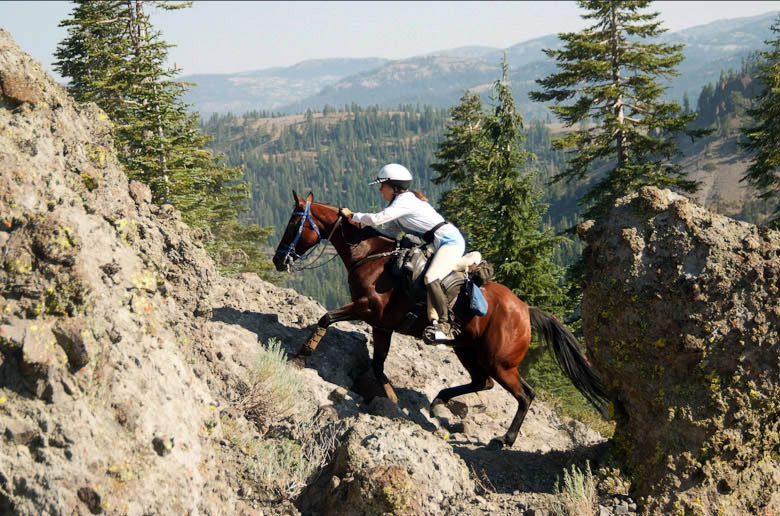