The horse’s anatomy and how the horse’s various parts and pieces all work together is fascinating. I suppose, it’s one reason I do body work on horses and some hoof trimming too. I’m always dragging home bones, hoof capsules or whatever I may find when I ride. For example my blog “Anatomy Anyone?” was thanks to a leg bone I found one day while riding in the desert. I just happened to spot a rib cage lying amid some grass along a dry ditch; I knew it was too big for a cow so I headed for it. And sure enough it was part of a horse skeleton.  I was as happy as if I had discovered gold! 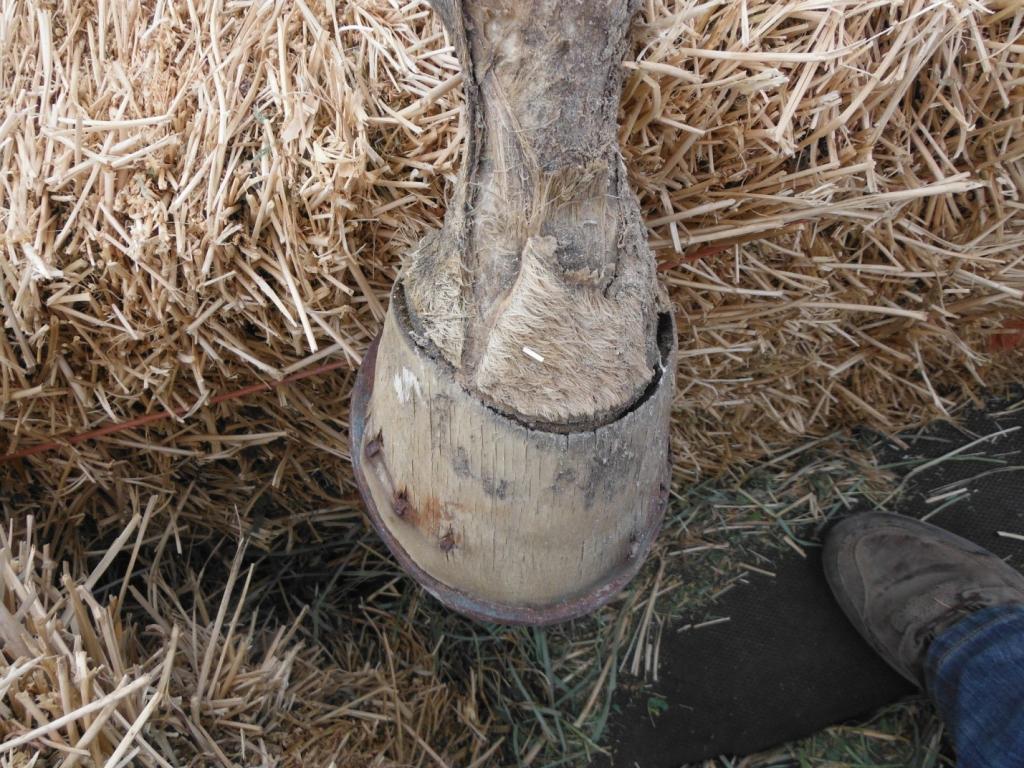 This was a left front leg; the hoof is still attached though the soft tissue and coronary band has all dried out.

While I was trimming a hoof the other day, it occurred to me how the hoof is such an amazing structure. As I held that hoof in my hand and studied it, I thought of how some people will pick out their horse’s hoof and not give it a second thought. But I know what all is inside there, and I have to admire its tenacity and great strength.

The hoof consists of both soft and hard tissue, a road map of blood vessels, cartilage and bone all assembled in one rather small neat package. The hard outer layer of the hoof hides all the intricate parts and pieces that wrap around the coffin bone or third phalanx and navicular bone, attached to the second phalanx or short pastern bone. Since people don’t see what is inside the hoof, they seldom think about it. To many, the hoof consists of the wall, sole and frog. That’s it. Nothing more. 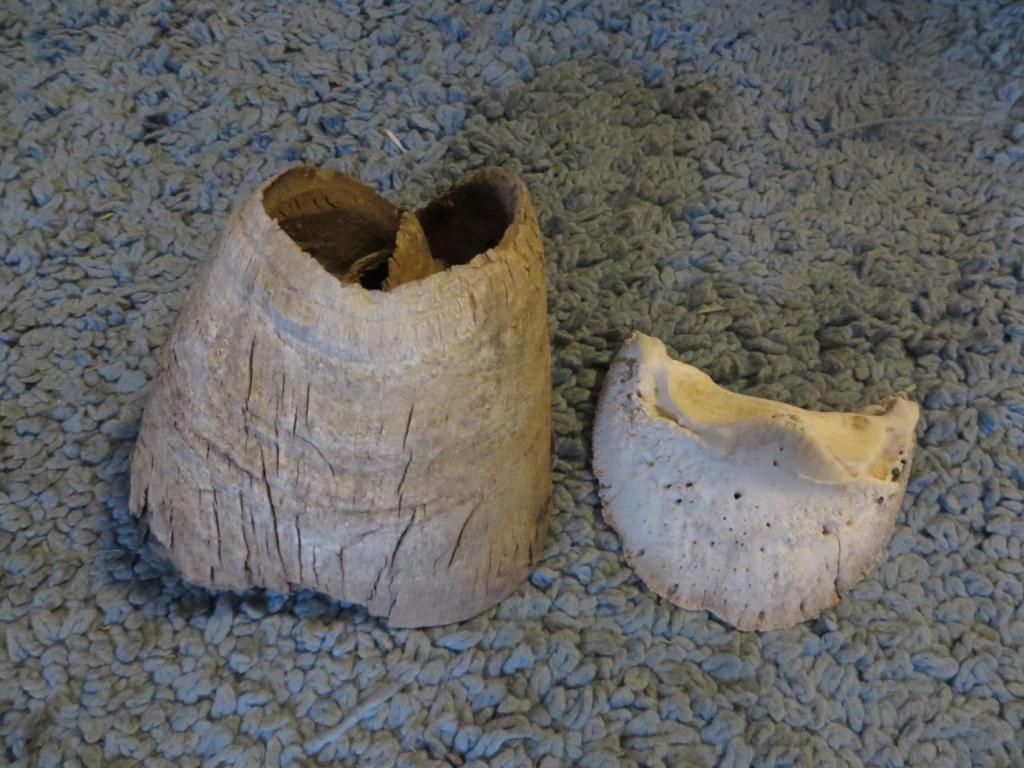 One of my finds a few years ago, a dry hoof capsule and a coffin bone. The skull was not far away and had a large bullet hole in the forehead. I brought “Bullet” home and added him to my collection.

This amazing piece of God’s handiwork averages around 5” in diameter for a 1000 lb. horse, yet four of these seemingly small roundish structures not only hold the horse upright, but support him and cushion his every step. They are like small springs that enable him to run fast from his enemy in the wild or on the track.

But even more interesting is to consider the size of the hoof in proportion to the horse. I don’t know exactly how much the average hoof weighs, I’ve googled and asked several farriers but no one seems to know for sure. Realizing that hoof size and density can influence weight we all had a few numbers, with help from my farrier/trimmer friends I’ll guesstimate the average hoof might weigh 5 pounds, only because the math is easier using the number five.

That approximately five pound structure has to hold 50 times its own weight for a 1000 pound horse. And actually that’s not an accurate statement because the front hooves and legs support roughly two thirds of the horse, so the front hooves work harder and take more pounding than the hinds.  This is one reason the front hooves are often slightly larger than the hinds.  So the front hooves would support closer to 60 times its own weight while the hinds might support 40 times their weight! And that is while the horse is standing still. Add to that the amount of force placed upon the hoof as the horse trots or races, the load bearing becomes immense! And these miracles called hooves make up maybe 2% of the horse, yet carry an enormous work load. 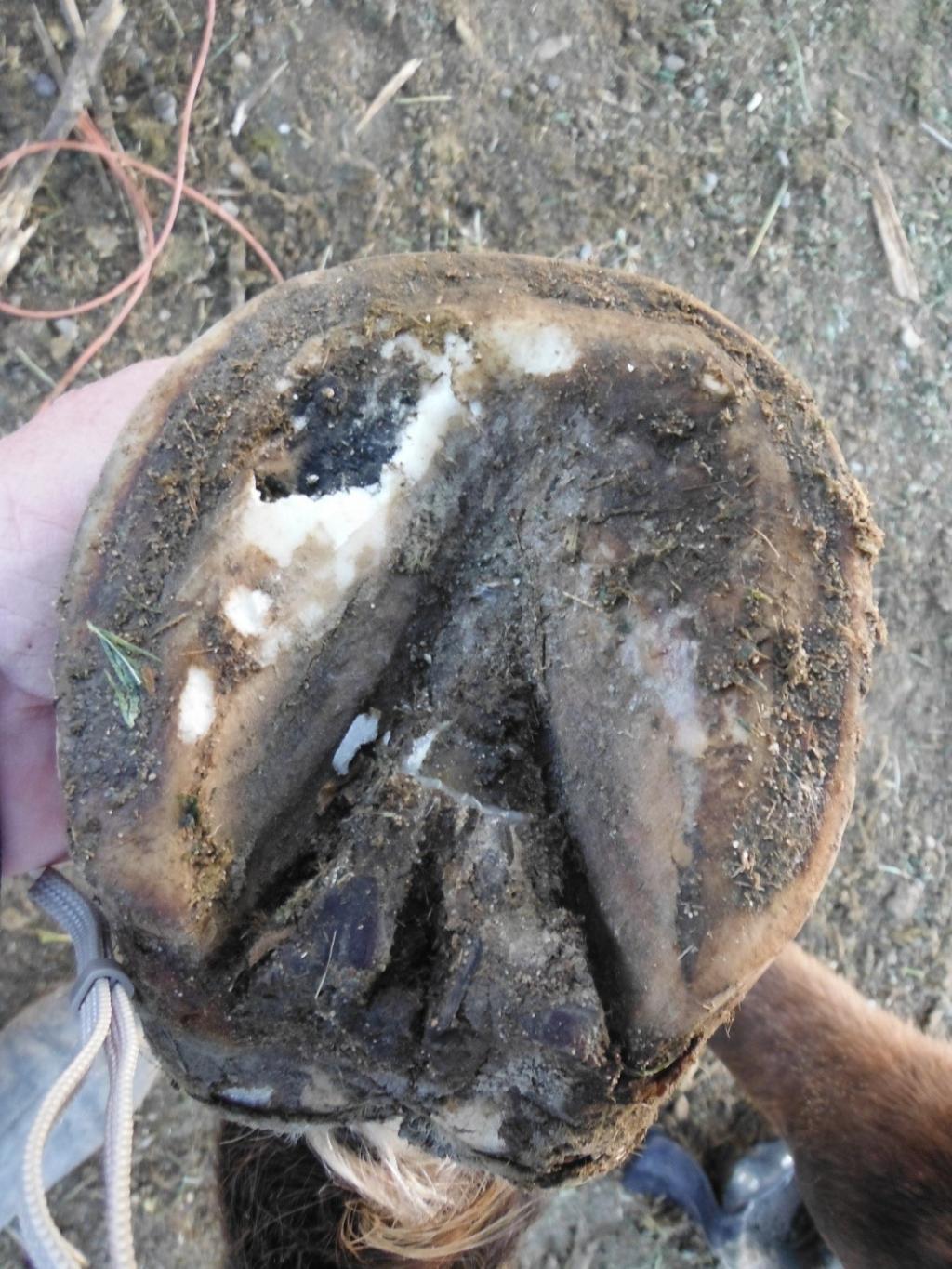 This hoof, in need of a trim, shows what’s left of an old abscess pocket under the sole, the frog also harbors bacteria known as thrush.

Now the hoof is a very complicated piece of anatomy. It isn’t considered an organ, but it is every bit as important to the horse’s survival as any organ. It’s normally quite efficient and people think that not a lot goes wrong with it. But what goes wrong with this intricate structure are a few of the leading causes of lameness and the downfall of the horse. Abscesses, Laminitis and Navicular are the first that come to mind. These are serious and acute lameness issues often requiring veterinary care. And often the owner and vet may look at the leg itself for lameness before looking at the hoof. In addition we also have thrush, poor hoof angles, and rotated coffin bone for a club foot, white line disease, along with problems of neglect, poor nutrition and improper care that wreak havoc on the soundness of the hoof. 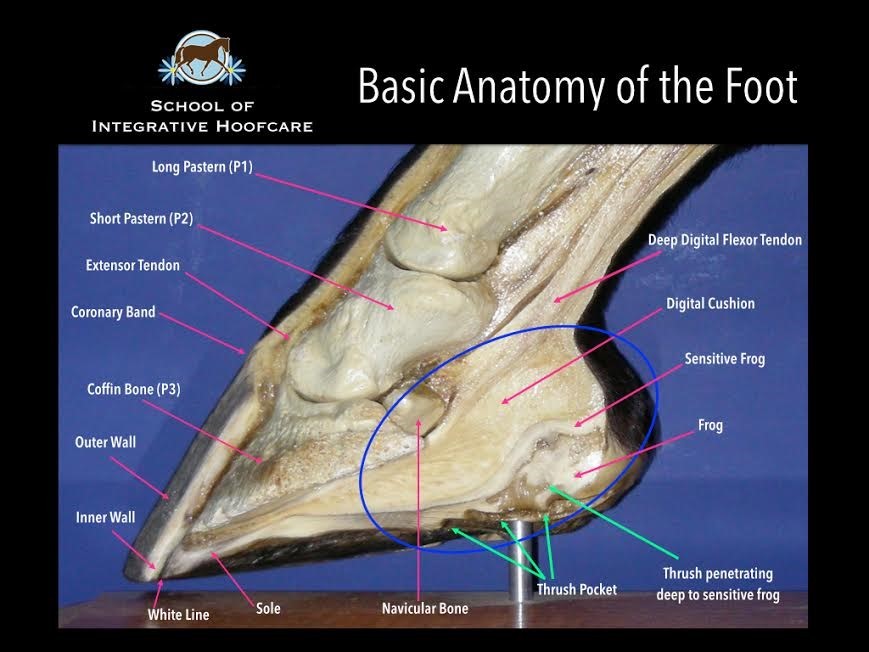 Our horses require a proper hoof in order to remain sound and healthy. Educate yourself and learn all that you can for the sake of your horse. Read up about hooves via books or web sites like these:

You might even want to attend a clinic or class on hoof trimming.

Ask your farrier questions. Most farriers will be happy to answer them, maybe not while bent over and working on a hoof, but give him/her a minute to get comfortable and answer. When I find a bruise or imbalance on a horse I do like to show the owner. Then I show them what I did to alleviate the problem. This type of thing helps the owner understand a bit more about why those four little hooves have to be so strong in order to do their job for the 1000 pounds of horse above them. 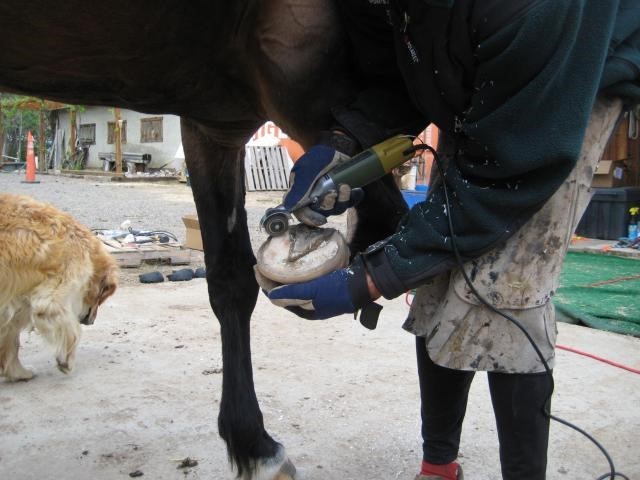 Christoph Schork using a Merlin tool on a horse at a hoof boot gluing clinic.

A balanced, well-trimmed hoof has to last your horse his entire life. While it grows new layers continually on the outside, the inner structures, if damaged, take a long time to heal. And while your horse may overcome the abscess inside his hoof, it might be months before it grows down so you can see it. Injuries to the hoof wall may take 12 – 18 months to grow out.

Hoof care is truly one of the necessities that you just can’t skimp on. The old timers knew what they were talking about when they said “No hoof – no horse”.