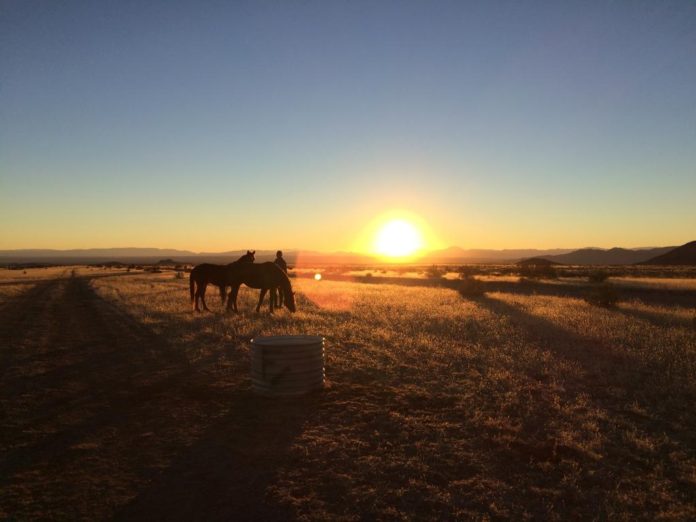 You know when you’ve been at a tradeshow for a few days, the first thing you want to do when you get home is pack up for a race right?

Garrett, Kevin and I had a fantastic time at the International Hoof Care Summit, sharing new product prototypes and hosting gluing contests for all walks of farriers.

Garrett had a couple of horses that he wanted to get through a 25 miler and invited me to ride Djustify, a talented 4yr old chestnut.

I met Djustify while riding with Garrett and Lisa in one of the washes in NM. I was on Durham, a bay gelding of theirs and Lisa was on Djustify, so I got to watch him from an exterior view for much of the ride. We happened to have with us a particularly spunky pony, who was loose.

If you’ve ever taken a baby or youngster with you and intended to turn them loose, you know you’ll have to be up for pretty much anything. What were NOT expecting was our happily loose pony to go rogue and try herding us and racing us. Where did the winter-wooly portly pony go? We were left with a wild stallion who darted off into bushes, assessing danger and then bursting back through the brush to herd us into a tidy group.

Halfway through the ride Lisa and I switched. We swapped saddles on the two horses and I was now on Djustify. He was very forward yet very controllable. I had a hard time believing he was 4. Even with a loose horse and other riders ahead or surrounding him; he was super sane.

Of course I wanted to ride him in his first race.

We drove out to NM and landed late in the evening. We popped up corrals in the dark and watered and fed the boys and went to bed. Early morning saw a beautiful sunrise over the grass-riddled desert and I couldn’t help but get some pictures. 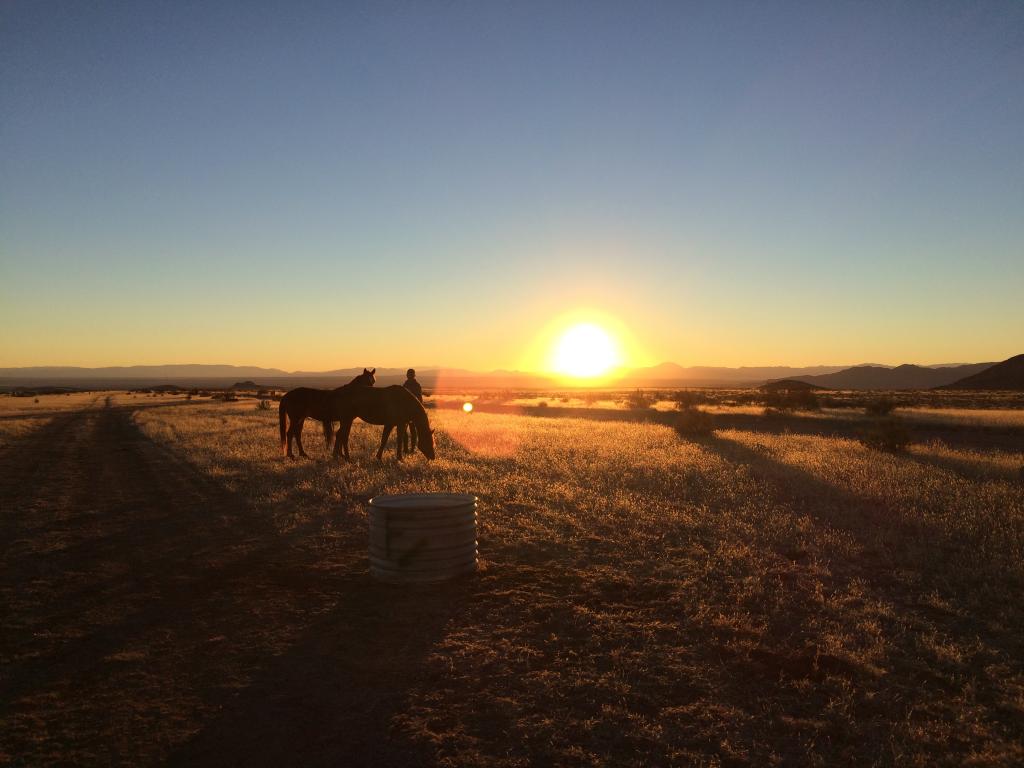 We vetted in for the 25 amidst the milling 50-mile starters. Djustify was at 36 heart rate and didn’t get frantic if his buddy wasn’t near him. He was soaking it all in. 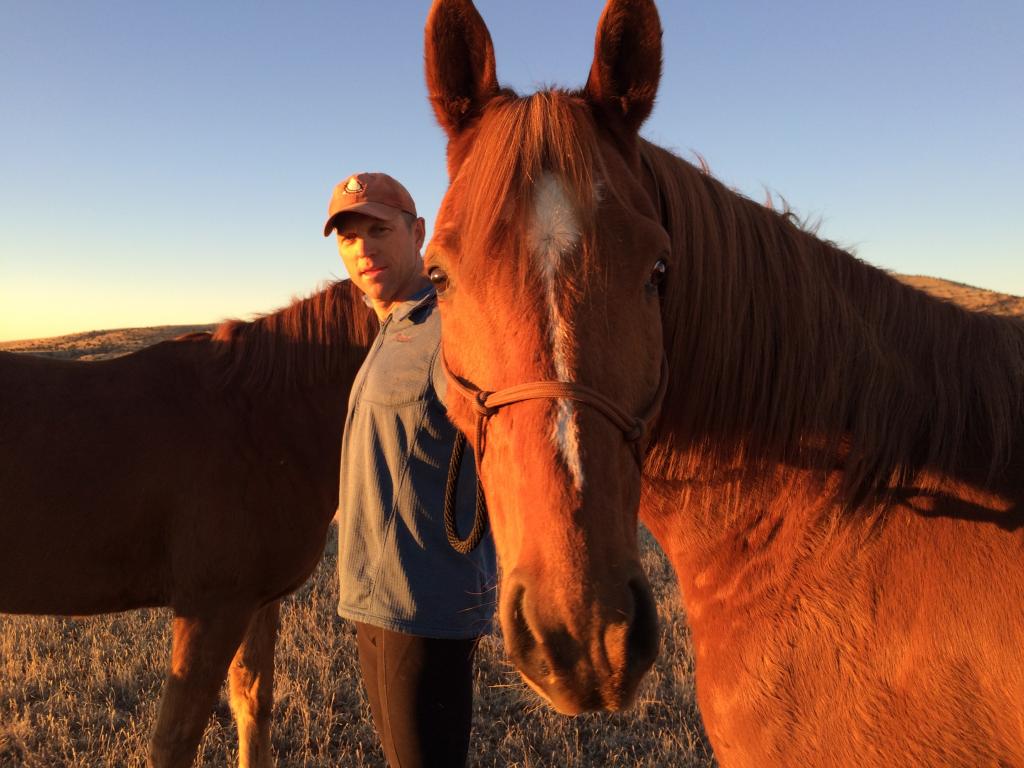 Garrett had glued a new prototype boot, the Slipper, on the front feet of his ride, Nouveau. We would be putting Mueller tape and Gloves on his hinds and the same on all four of Djustify’s feet. Garrett had also drilled holes in the boots to add in Equi-Pak Soft. 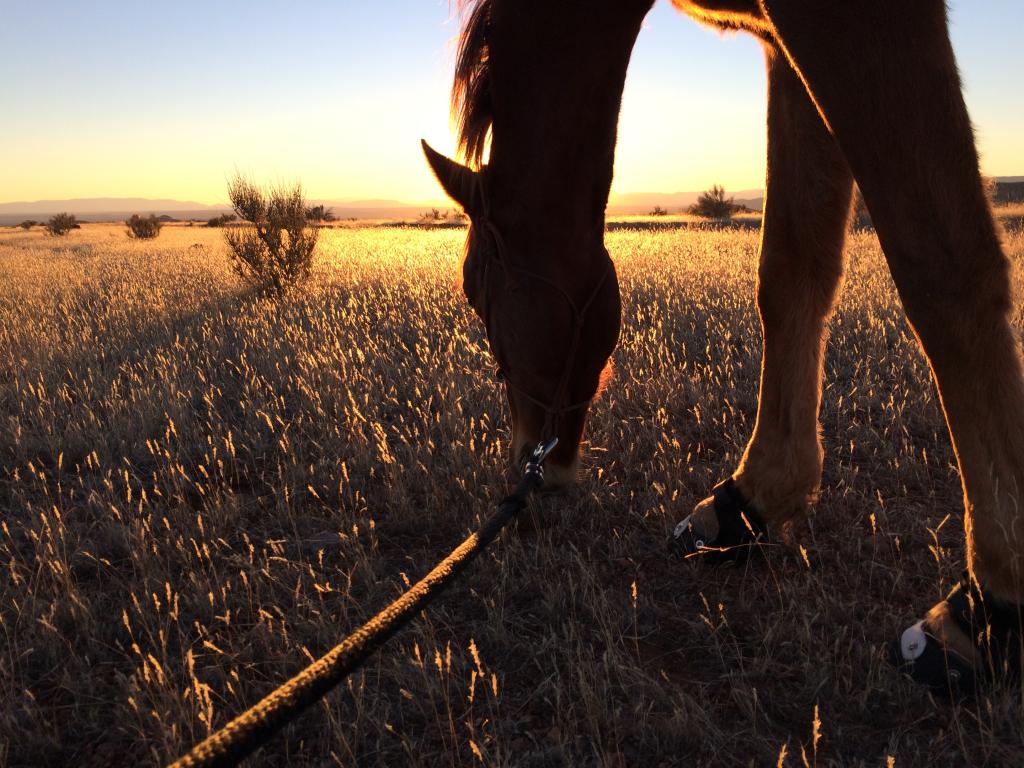 He had already done a pour-in cushion with Shufill Urethane Medium for Nouveau’s fronts when he applied the Slippers. (Note, this product was given to us just days before at the International Hoofcare Summit by Stephan Van Der Heijden of Glue-U, who says this product is a hybrid that works well in cold and sticks to the hoof. It is different than their other sole product line which are silicone.) 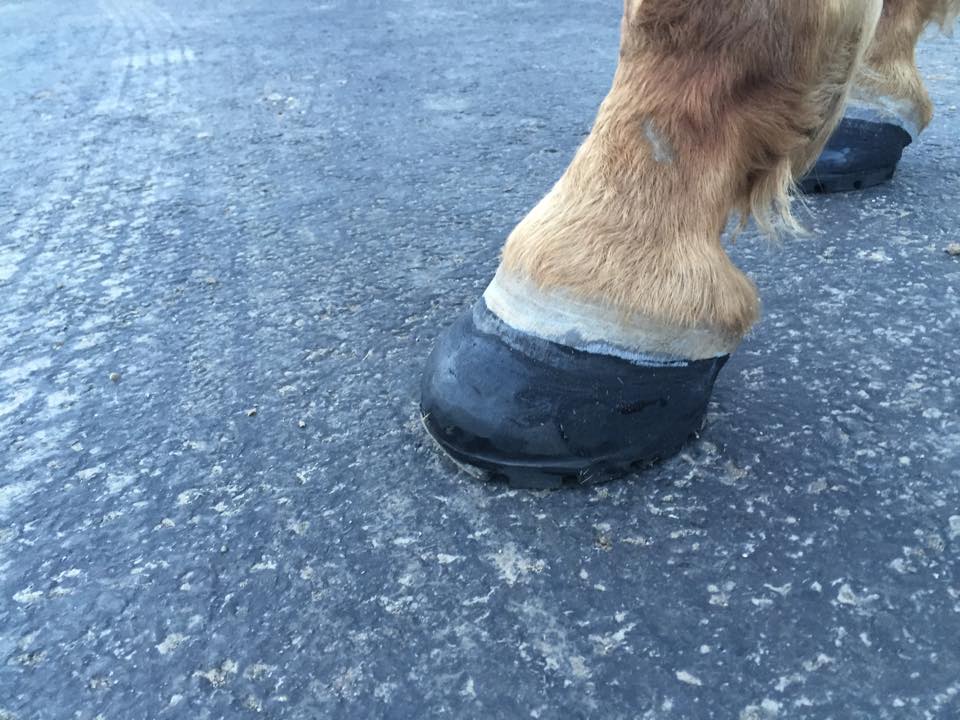 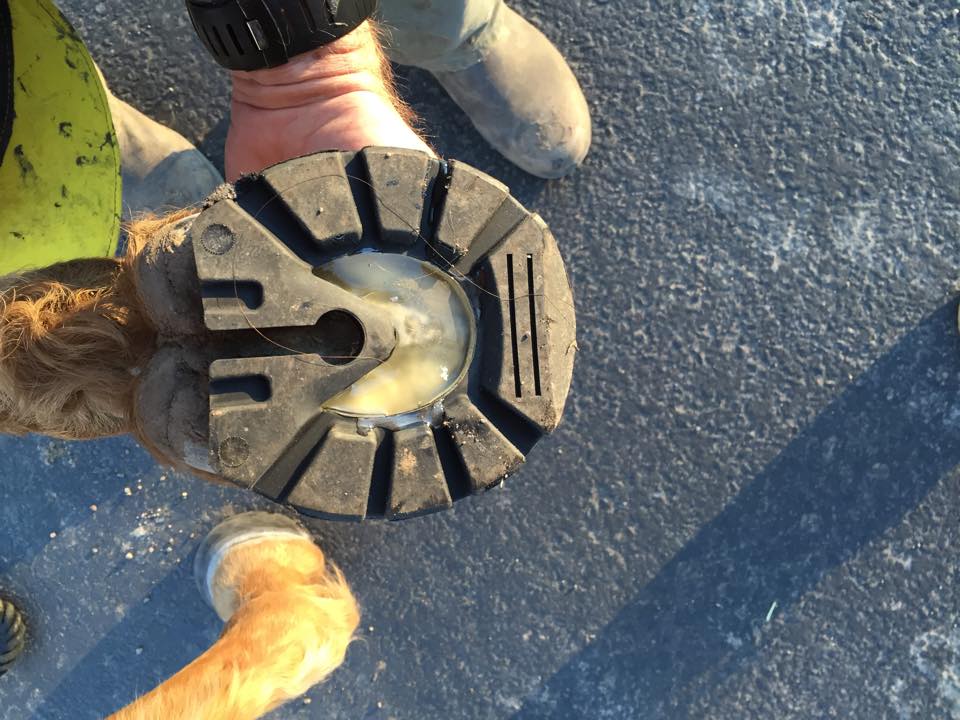 As you can see, the Slipper is the love child of the Glue-On and the EasyShoe Performance.

Tacked up and race started, we stayed at the back and walked to warm up the horses. We picked up a jog to loosen them up and then picked up more of a working trot. Quite soon, we were in the front. This wasn’t meaningfully in the front, as we were treating the day like a training ride.

We hopped off at water troughs and got Djustify used to the pleasure of being cooled on the trail, albeit, I was just scooping water onto him with my hands. At one point, Garrett used his helmet as a scoop and the amount of water made Djustify’s eyes light up. YES PLEASE!

We alternated leading and the 4 yr old surprised me again with being a very forward and spook less youngster. I have to say, horses off the track have been ridden a lot! You have to forget that mental age as they are big boys now with a job. 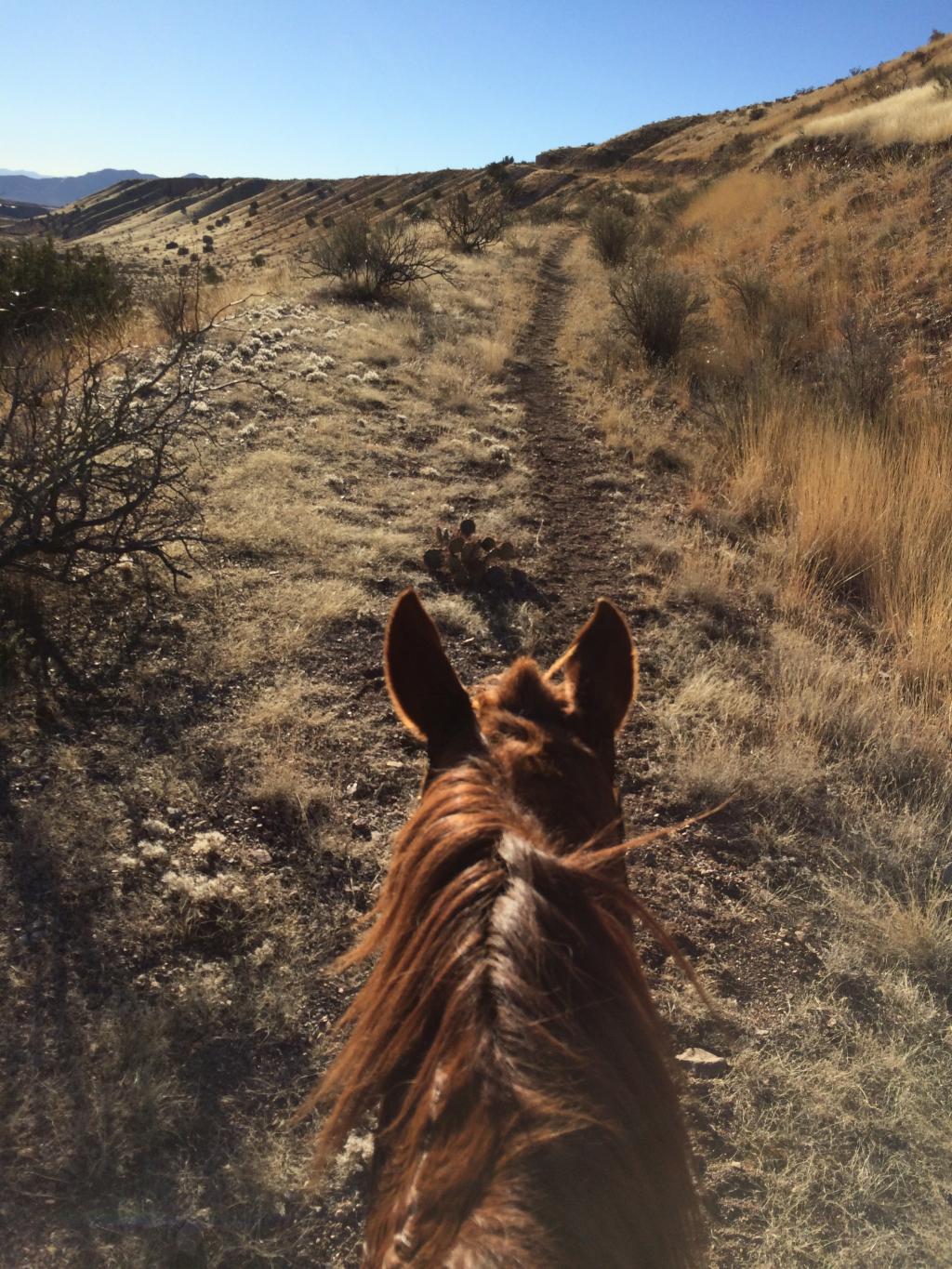 We walked up a canyon and then hopped off to hand-walk them down the other side. Mounting and dismounting on the trails and scooping water and hiking were all part of the job and Djustify was going to see the support that his rider-mate would offer him during a race. 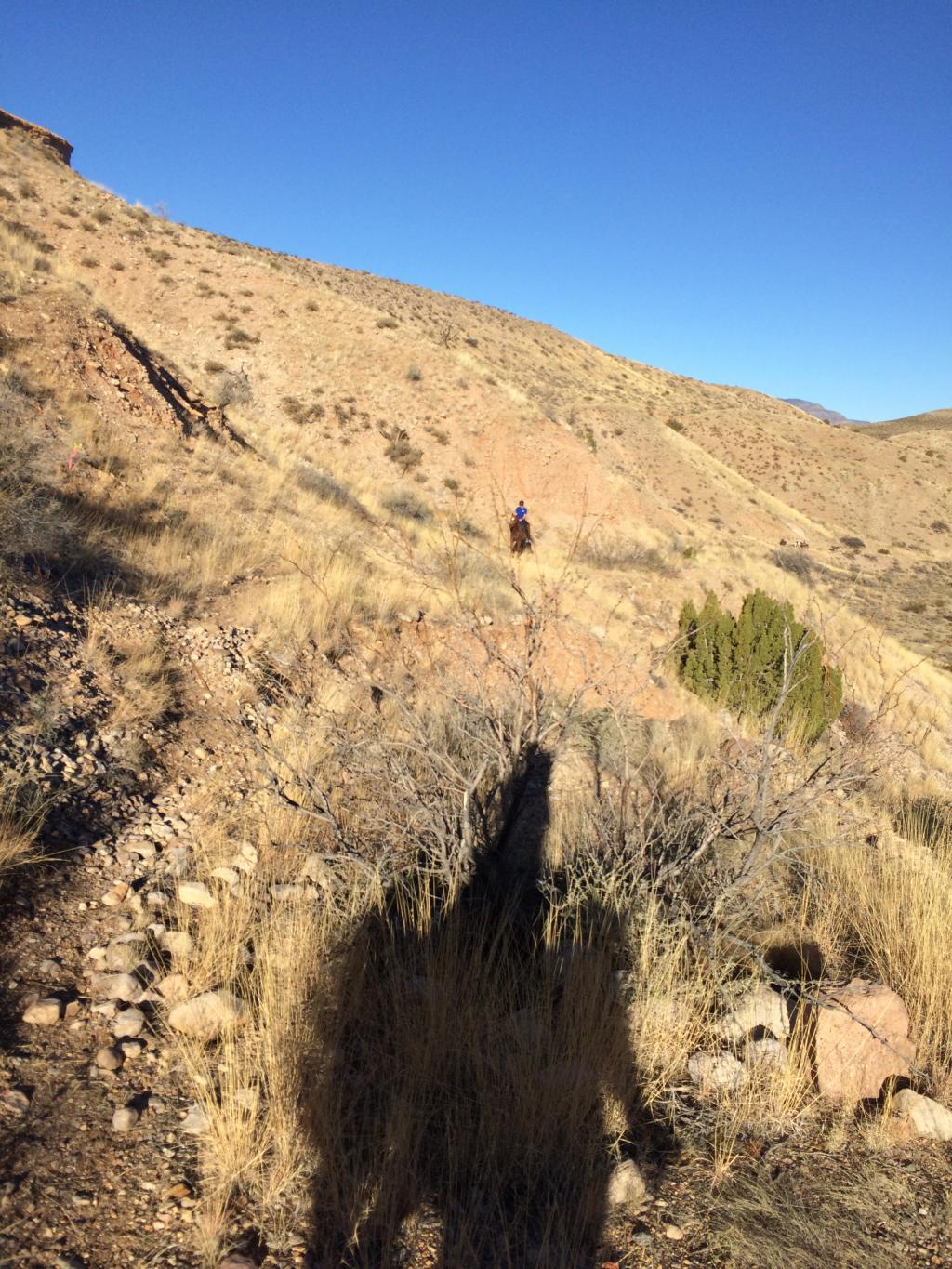 Practicing leap-frogging on the trail so both horses could pass and be passed.

It was rocky too. I was off walking and having trouble not rolling my ankles in my little, leather, heeled riding boots. I was watching Nouveau’s hinds and marveling at the way the tread capably covered the rock strewn ground. It was also neat to notice that they didn’t “pound” the ground blindly.

I could see when Nouveau stepped on a rock directly and would not put full weigh on the foot and sort of softly go over it. He could still feel the terrain and take care of his soles, which was nice to see. 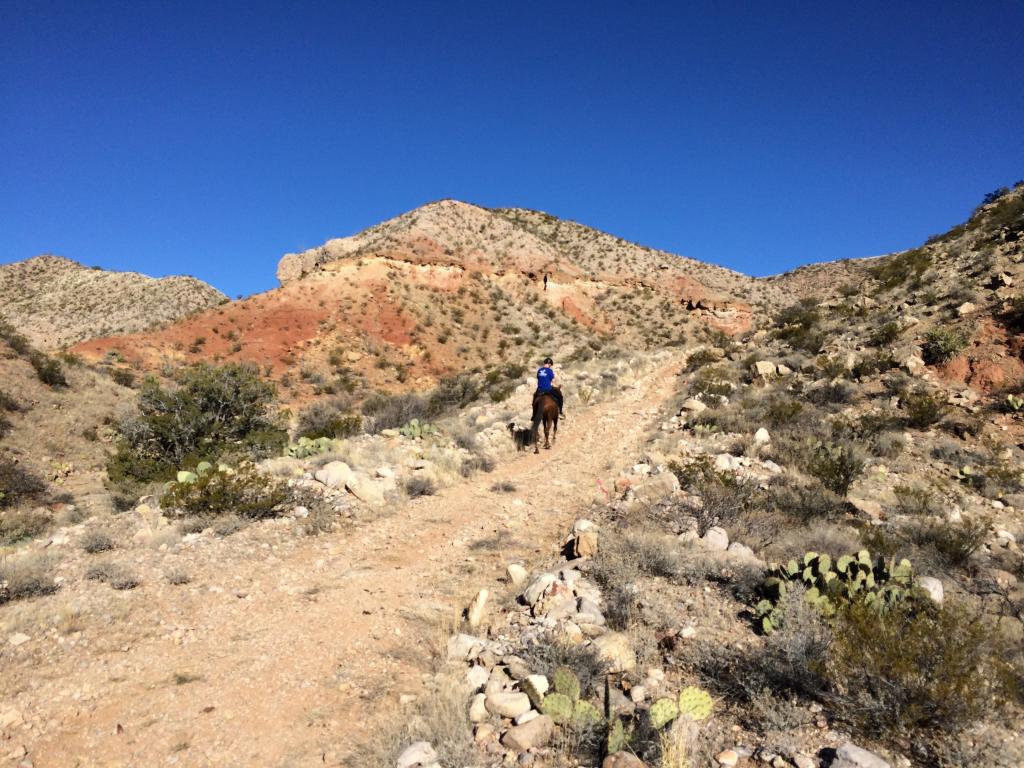 Hopping back on, we climbed back out of the small canyon and headed into camp. 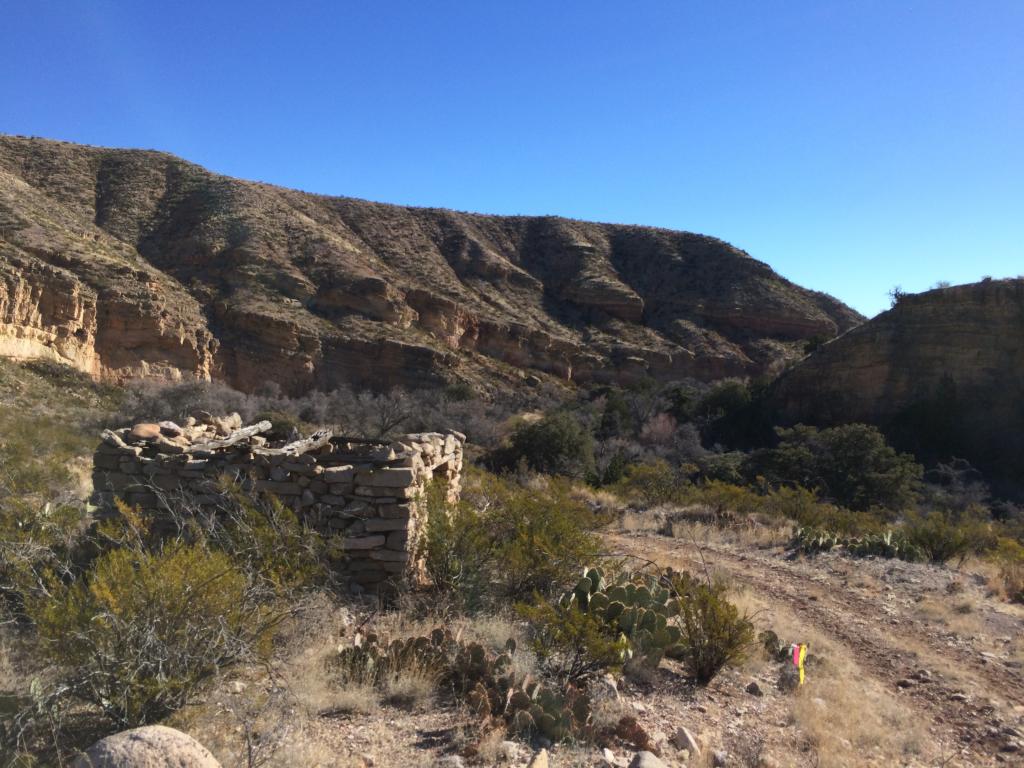 Sure, she’s a fixer-upper, but look at the views!

We vetted through wonderfully and let them roll. Djustify was trying to figure out if we were done. How is this a group ride when everyone is coming and going? Am I done? Where are THEY going? I sponged off his saddle grime and got the sand out of his nooks and crannies. He then settled into eating his mush and diving into his hay. This is not a bad deal. 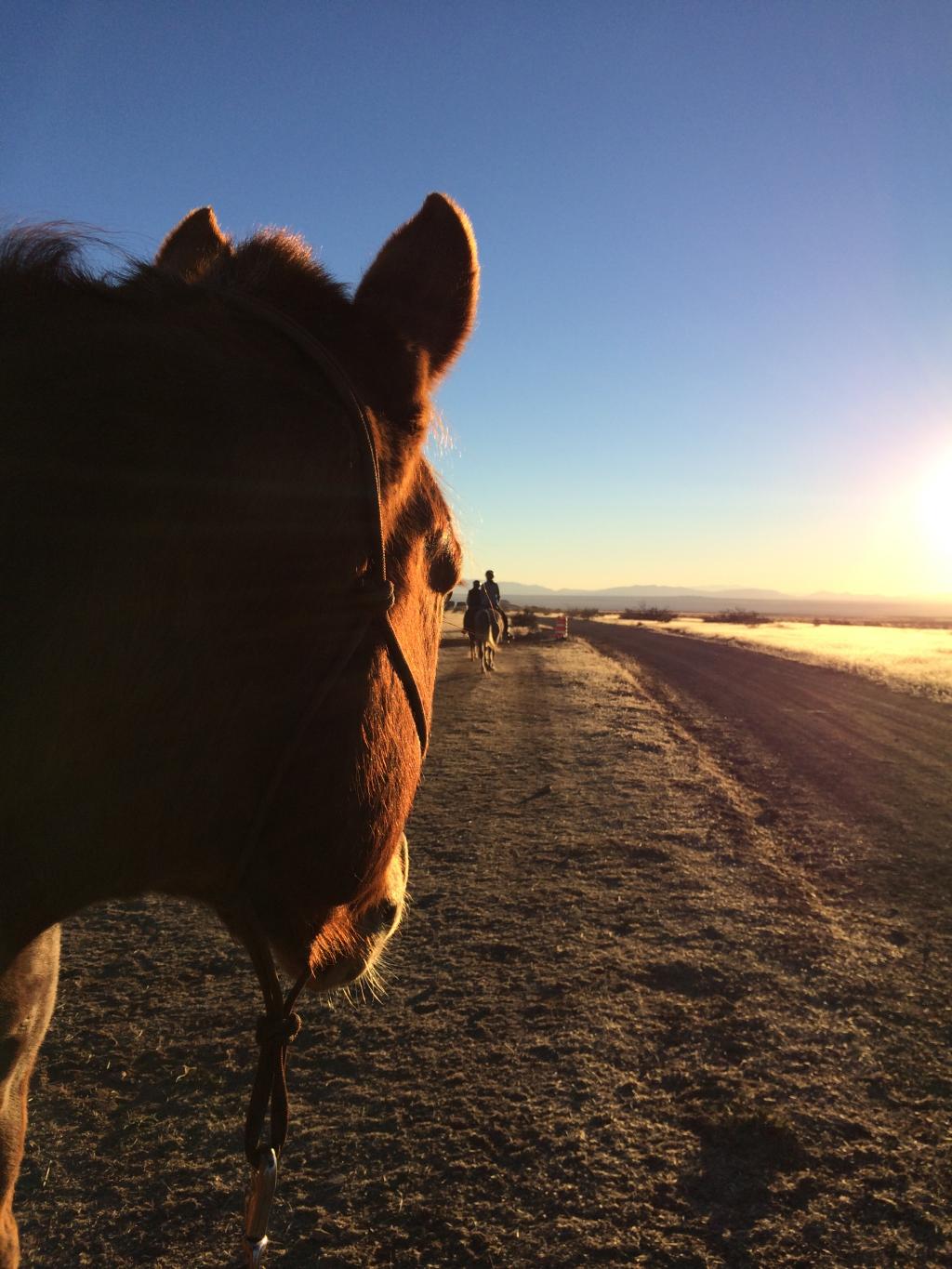 “Where are they going? This is the strangest training ride.”

We stayed in camp a few extra minutes, as we weren’t in a rush (read: I don’t really keep track of time and I wanted to wolf down a yogurt before I saddled up). When we left camp, Djustify was so excited that he twirled a bit while I was getting on. Rather that, than a horse that doesn’t want to leave camp.

We hit the trails with a plucky trot and took turns leading again on the single-track that followed the ranch fence line. We had seen no real wild life, but were now approaching a pasture of cattle. I don’t know about you, but reading cattle is dicey. I can’t tell if they are happy to keep sitting in the shade, or they are going to stampede. They have the same look either way: intently watching horses, totally frozen.

Nouveau saw them first and gamely trotted up the next rise. Djustify saw them and his instinct was to do the baby thing: stop and face the cows and assess. It would’ve been a stand-off, as the cows just stand and stare too. So before he could decide to have his OK Corral moment, I headed him up the hill after Nouveau.

We saw deer next, with not much fuss, even when they left. The footing was getting better, but randomly deep where there were odd gopher holes. They say everything is bigger in Texas, well the gophers in NM must be the size of small cars, because these mounds were impressive. I was equally impressed that I didn’t pop off any of my Gloves and they didn’t collect dirt. 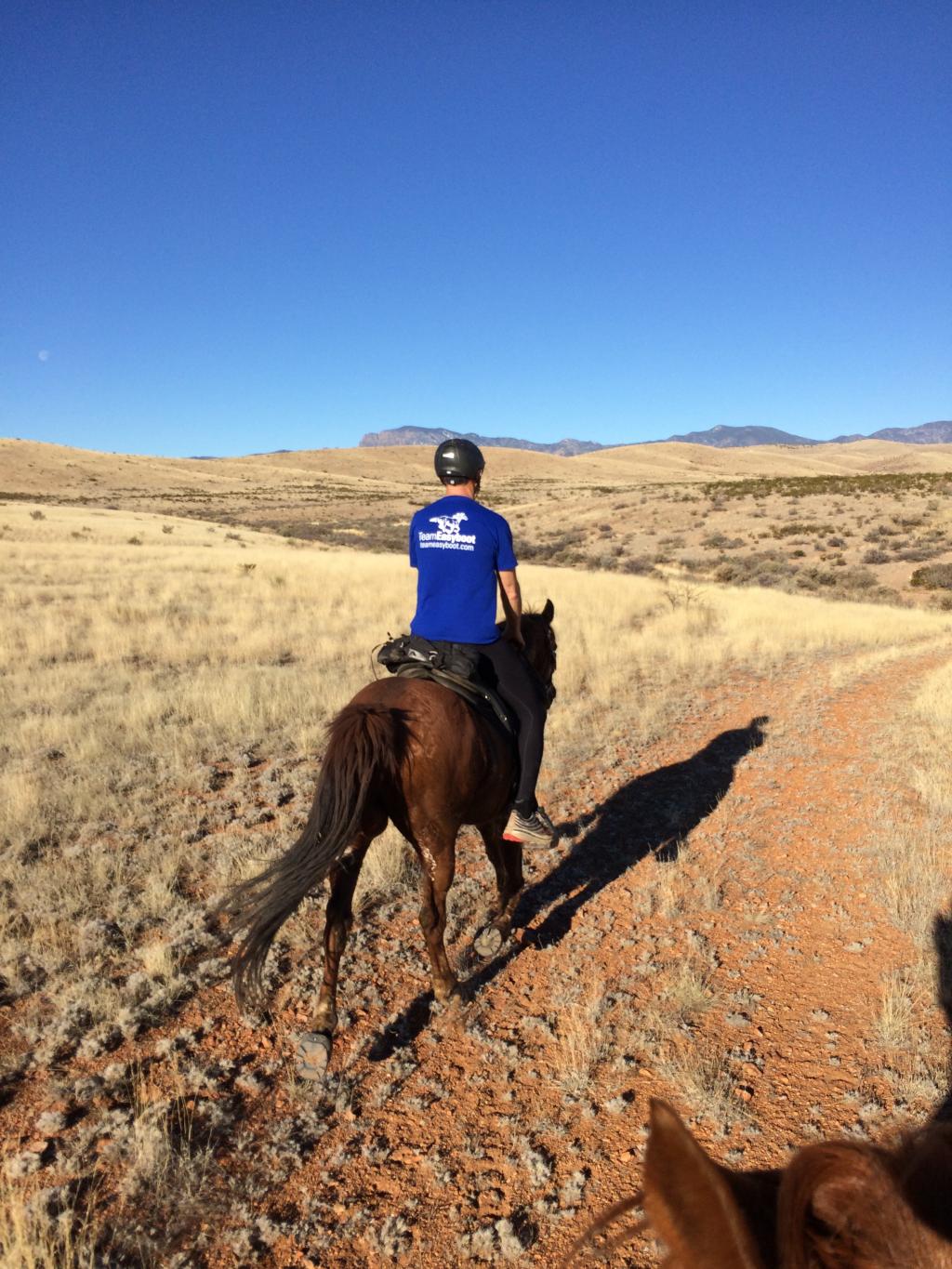 Garrett and Nouveau on Loop 1. I was digging the tread pattern on his Slippers and Gloves.

We turned a final corner on the fence line we were following and were about halfway through the loop and officially “heading towards camp”. As the trail left the single track and picked up on the wide road, Djustify dug in and wanted to canter. Picking up an easy lope is really enjoyable on a racetrack horse. They really know how to use their hind end and know how to do lead changes nicely. They work one side of their body and switch gears to the other side when needed.

We came over a rise and Garrett asked me what that was in the distance. Not having glasses on, I hadn’t the foggiest. I had to get relatively within distance to note that it was two, lone alpacas. 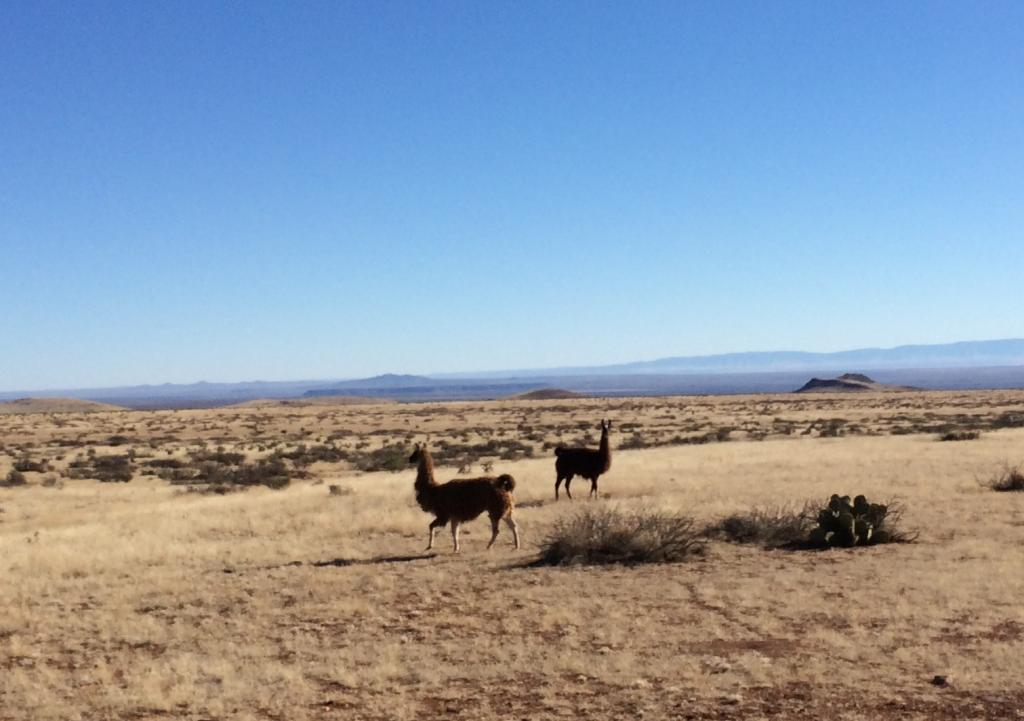 One circled around and came between us and the 2nd one. We immediately understood that he was the male and she was “his”. Garrett slowed up to a walk, but the look on Nouveau’s face read, “If that thing comes any closer, I’m getting BOTH of us out of here.”

Our intrusion lead the alpaca to snake his head down and then the ears went back. He started jogging in a flat, confrontational manner at us. Garrett made a few whoops and hollers at him and it was enough to deter his charge. He turned and pranced back to his missus with his head held high. I might’ve gotten a picture of him at the beginning of his dance, but I got both hands on the reins and ditched the pictures once he started coming our way.

We get it buddy. She may be 87 years old and missing a tooth, but she’s the only female in all of the ranch and she’s YOURS. You can have her. Djustify thought it was all so exciting.

Cattle and Deer and Alpaca: Oh MY!

We hit the final water trough on the trail and he happily cameled-up.

We now had oncoming traffic from horses leaving on the 50-miler loops and he did great with that. He saw the white trailers and camp in the distance and I could almost hear his thoughts, “Snackie time! Holly is going to sponge bathe me! I get mush! I get to see the vet! I get rolling time!” Everything is so exciting to a happy horse, or maybe all my internal monologues occur in that tone.

It’s really nice to take the time to ride a race right, to ride a race for the horse, to let it be his introduction to the world of distance riding and to make it leave a sweet taste in his mouth. We strolled across the finish line and pulled tack as we passed the trailer. We walked to the water trough at the P&R area and let them have a drink, then P&Red to officially finish. Djustify was at 40. With his vet check and trotting out and back, he was still at 40. What a guy! All vetted through; we let the boys have a celebratory roll. We finished in 1st and 2nd and both horses looked absolutely ready to go out again. 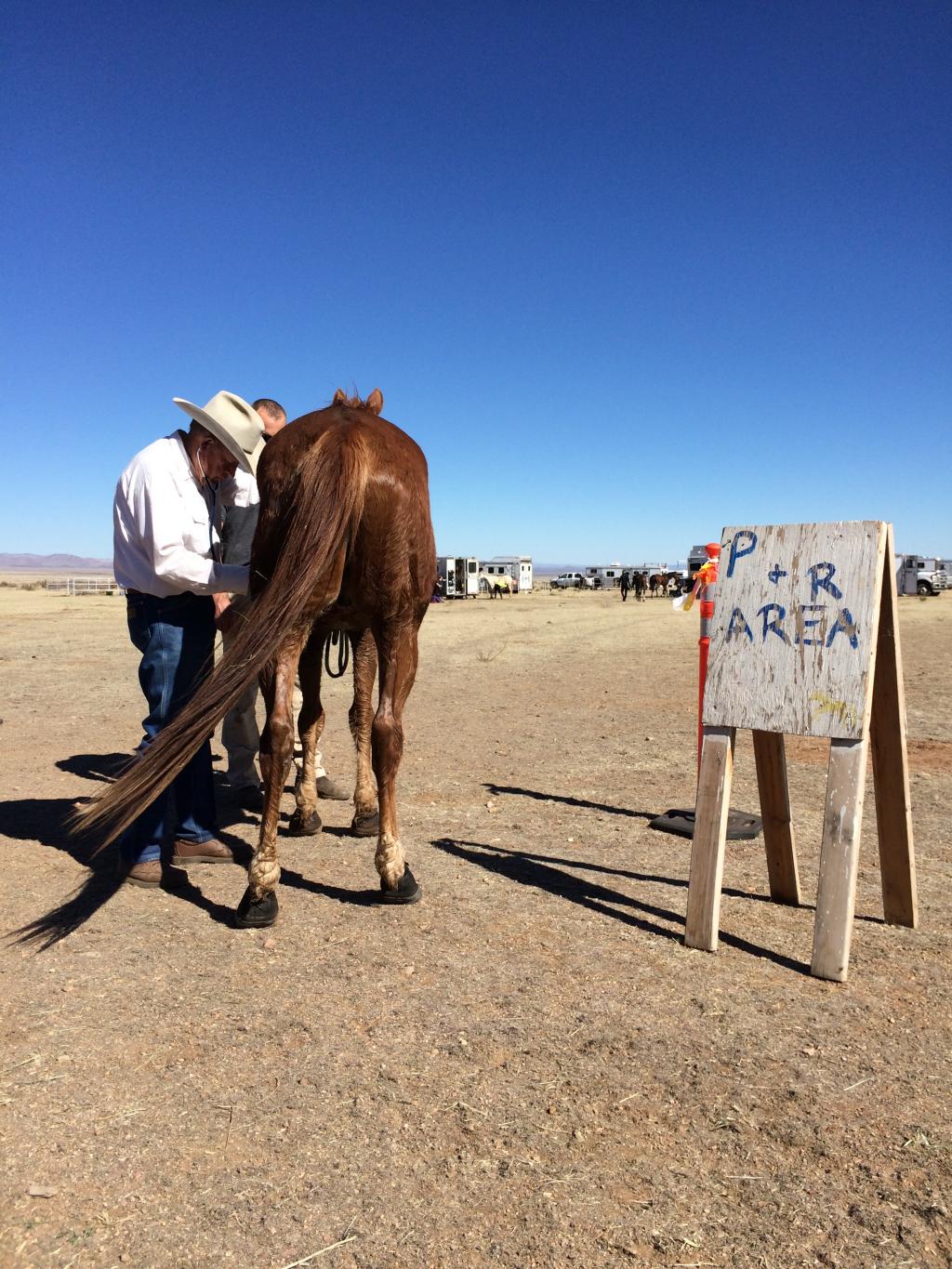 Djustify drank eagerly and dove into his food. I could tell he thought he was actually still racing and he was tanked up and ready. I laughed and let him know we were done. The look in his eyes said, “Please, one more loop!” 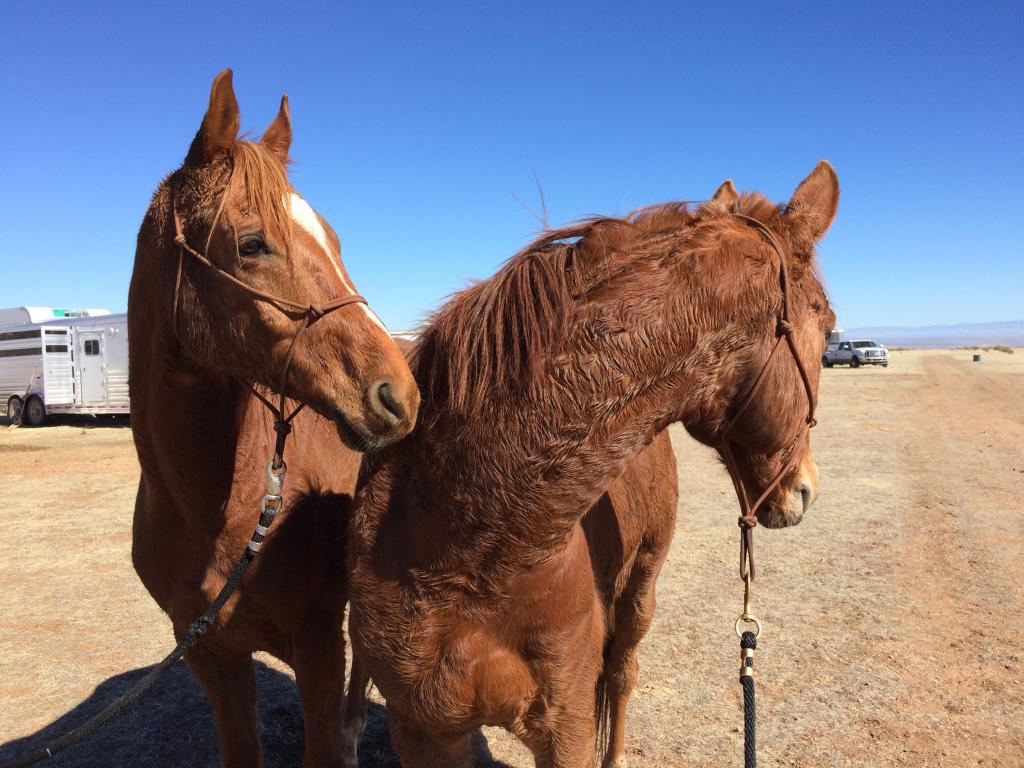 “I think we’re still going out again. Other horses are doing it!”

I was happy to report we lost no boots and had no sand or rock accumulation in them. We also saw a number of people using Easyboots and Easyboot Epics on their horses. One guy had Epics on over the top of his shod hooves, as he knew the trail was rocky and wanted solar protection. He had done the first 2 days of the race and was on his 3rd 50-mile day. I really loved seeing Garrett meet up with people and answer questions about boots. If our ponies were happy, their ponies should be happy. 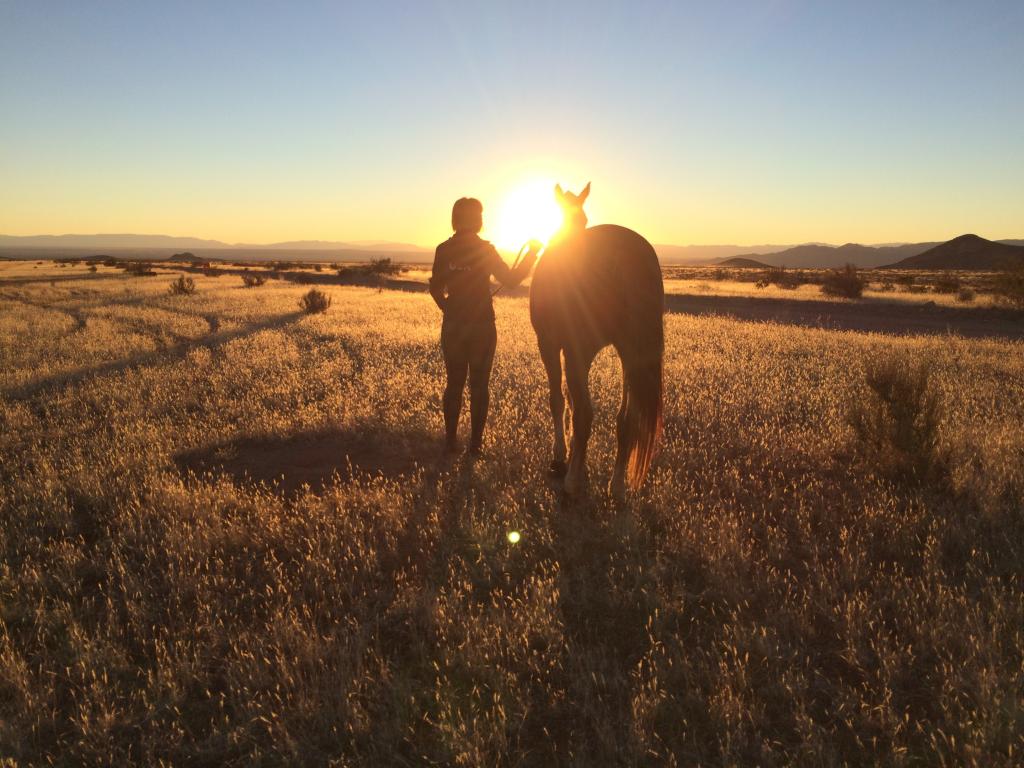 Until the next ride!