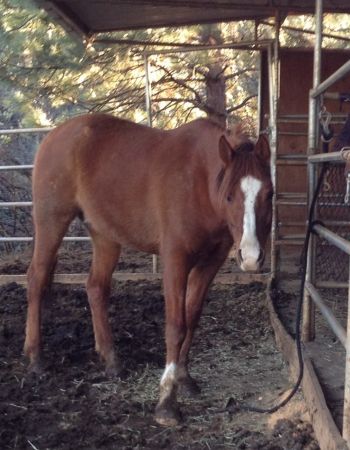 Last weekend Project Horse Hopi came home from the trainer’s where he was learning to be a brave horse. Shortly after New Year’s I visited him at boarding school, gave him a trim and fitted him for Gloves – size 1.5 – and took him out on a trail ride.

The size 1.5 Gloves were a good fit (understatement – I couldn’t get them off at the end of the ride). Hopi has nice round feet.

Fast-forward to a month later and it was time for him to come home. The trainer, Jodi Tuft, very kindly offered to bring him half-way where we’d meet, take a trail ride, and then I’d bring him home.

I had a feeling I was going to have some trouble getting those 1.5s on him and I was right – a quick comparison between boot and underside of foot showed me that no-way, no-how were those boots going to go on. Luckily, I had Uno’s size 2 650-mile Gloves sitting in the trailer, so I popped those on instead. The one with the Powerstrap was a nice snug fit, while the non-powerstrap one (remember how several months ago I was going to put one on?) was a bit too easy to get on. Hmm.

To make matters worse, rushing to get ready, I neglected to tighten the gaiter on the non-Powerstrap boot. <sigh>

It actually lasted pretty well – staying on for about six miles (the last four miles of the Tevis trail and back) before it popped off on a narrow steep uphill section in the Black Hole, shortly after crossing a creek. 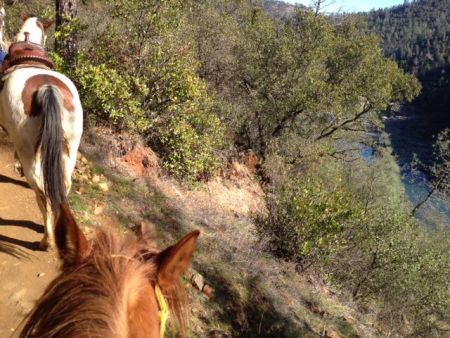 Considering that the first time I ever put boots on Hopi he tried to rear to get away from them, and the second time he adopted helicopter ears to try and look at the flapping gaiter I’d deliberately not fastened around his pastern, he actually coped very well with the boot semi-loss. He jumped around some, but I suspect that had more to do with his trail buddies disappearing around the next corner than fear that something had chomped him on the leg. I was able to dismount, pop the thing back on without further excitement.

Predictably, that loose boot came off again in the last few hundred yards of the ride – again, coming up a rough-footing hill. This time he didn’t even react to the boot around his ankle and it’s only because we passed some riders coming down the hill and one of them pointed the flopping boot out to me that it got noticed. Not bad for a scaredy horse – he’s a quick learner. Good boy! (thanks Jodi!). 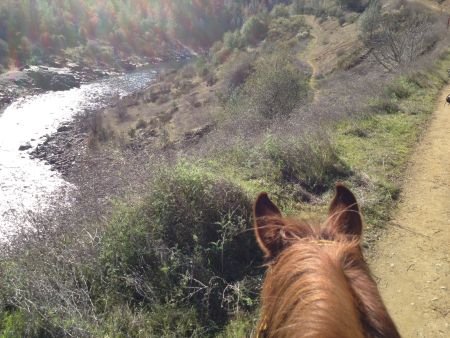 I suspect that the more he gets ridden the larger his feet will become and he’ll graduate firmly to the next size up – instead of just when he needs a trim. Hopefully this year he’ll get to do some endurance rides, so we’ll see how his feet develop over time.

Of course, the lesson is that if I want to keep him in well-fitting boots [size 1.5] in the meantime, I’m going to have to keep his feet very well trimmed at all times.