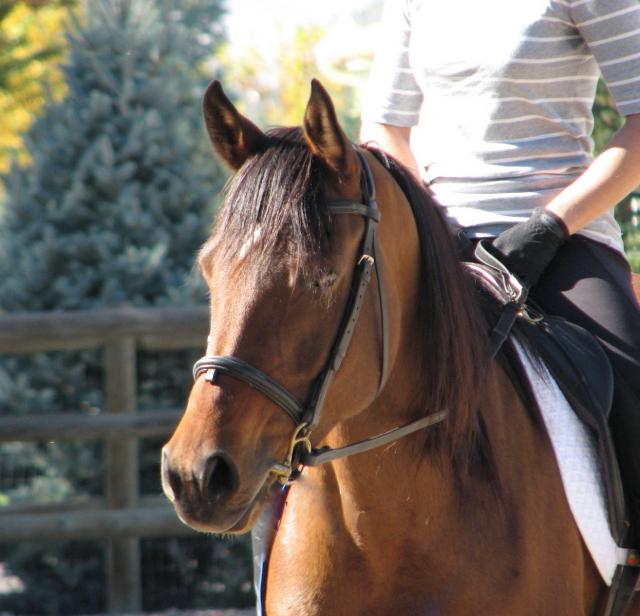 There are some things in life that are put there just to test ones resolve. In my case, it’s what I refer to as “the dirty dish.” No, I am not talking about the battle of the dirty dish that occurred between roommates in college, where in a passive-aggressive manner one or more of us would go on strike against dishes when a certain roommate who seemed to think washing dishes or even putting them in the dishwasher was against all religion, I am talking about a pathological or chronic flare present in my gelding’s right front foot, or, The Bane of My Existence. Seriously guys. This flare has been a battle that appears to be uphill. One that I cannot seem to win. Sometimes I’m able to resolve myself to the fact that this will always be an issue, albeit a manageable one, but other times, the times where I am frustrated with something else or feeling like I can’t catch up in other areas of my life, I have a fit.

Topper has been in our “family” since June of 2009. He came as a three-year-old, all gawky legs, with the habitual stance of putting the right front foot back and his left front foot forward in order to lower his little mouth to the ground. Although somewhat tall for a 3yr. old at 15.1, the striking thing about Topper was (and still is) his crazy long legs. Unfortunately, he continued to grow and now at 15.3 he has continued on with his habit of right front back and slightly towards his center, and left front forward. As result, Topper’s right front develops a flare at about 10 o’clock and his left front tends to grow a longer toe. I guess you could say it’s a typical high/low case, but I believe this stance is the blame. 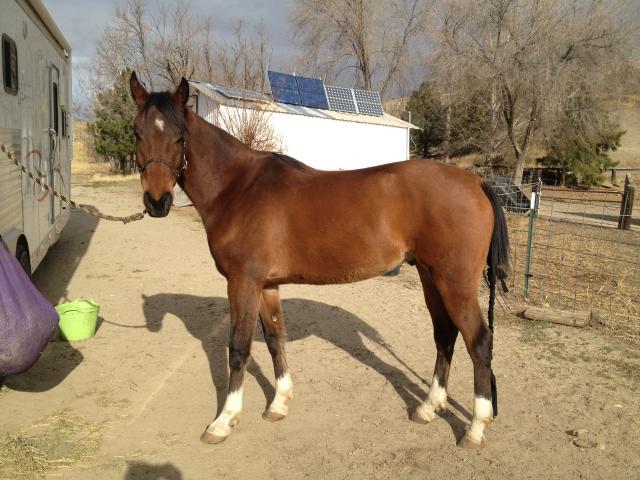 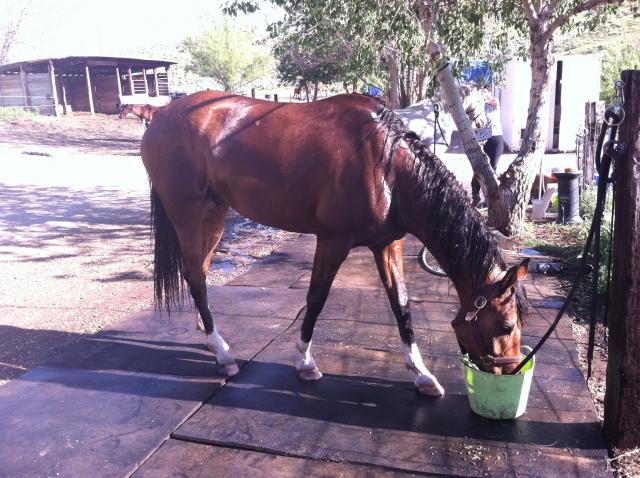 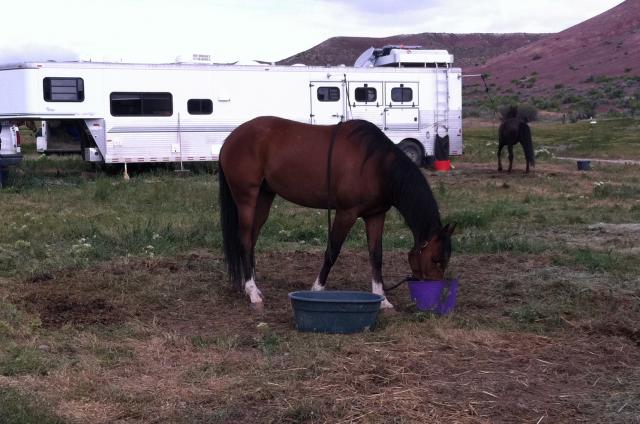 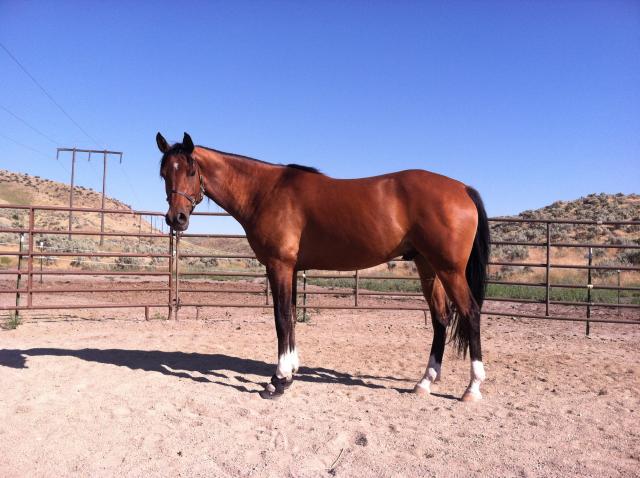 I have tried just about everything to “fix” it. But in one of life’s important lessons, I have learned that you can’t fix everything. Sometimes you have to just deal with the cards you were dealt and make the best of it, which is what I have done. To address the flare, it is absolutely imperative that Topper not go any longer than four weeks between trims. Even then, that is too long. The cycle seems to go as follows:

Well you can see where this goes. Unfortunately it doesn’t say much for my intelligence considering I have been rolling through the above cycle, over and over, for the past two and a half years. Sigh. Some people’s kids. 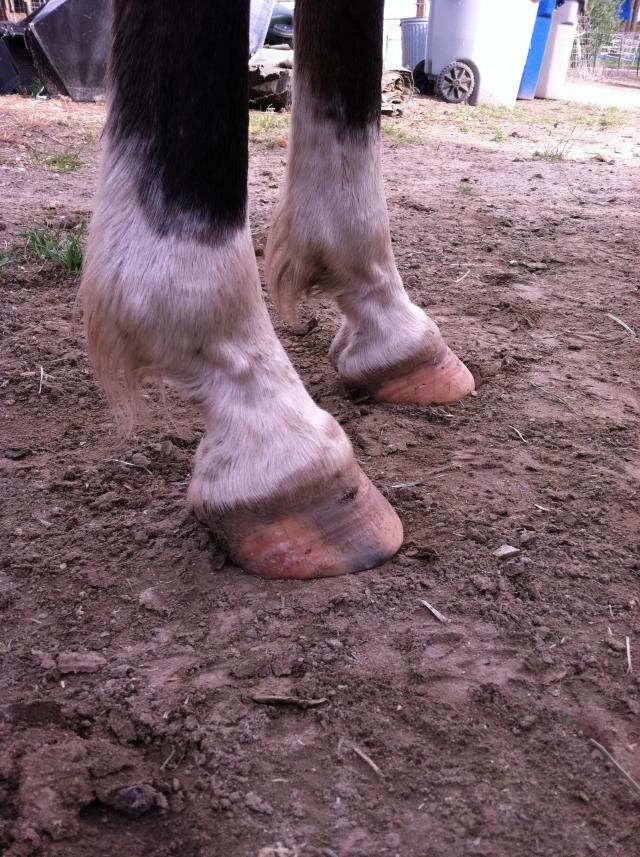 Topper’s hooves, sans flare, after a period of very diligent trimming. Apparently I don’t keep the “before” pictures. You know, if you don’t see it, it must not exist.

Because I am not a professionally taught trimmer (and obviously am not THAT good or maybe this WOULD be fixed) my intentions were not to explain how to trim the flare, but more about dealing with the frustration that you may come across while caring for your barefoot horses. Although I joke about it, I can honestly say it really upsets me that I can’t seem to fix this but it is what it is and for whatever reason, I really love this crazy horse and he’s worth it. I had one of my little fits the other day and for a second wished that I shod my horses, that I didn’t know what I know or that I just didn’t care. Of course the thought was fleeting when I realized that if his feet look slightly neglected after four weeks, imagine what they would look like after eight weeks in shoes. Not to mention the cringe-factor of nailed on shoes AND the cost of re-setting those shoes every six to eight weeks. No thanks. 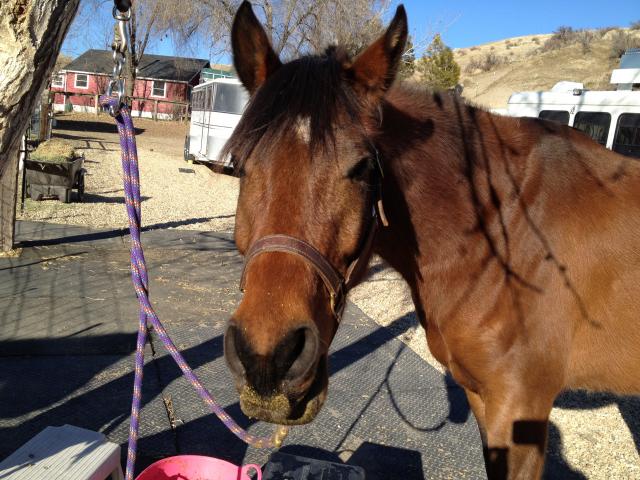 How could you not love that goofy face?

My plan to deal with this issue is to continue frequent trimming, which really seems to be the most important thing. I have worked hard on developing both sides evenly from the saddle, and he travels beautifully. In an ideal world, I would have raised feeders to help alleviate the need for Topper to eat from the ground with his legs ten feet apart, but that isn’t really possible at this time.

I know everyone has a dreaded Dirty Dish in their horse lives. What’s yours? How do you deal?