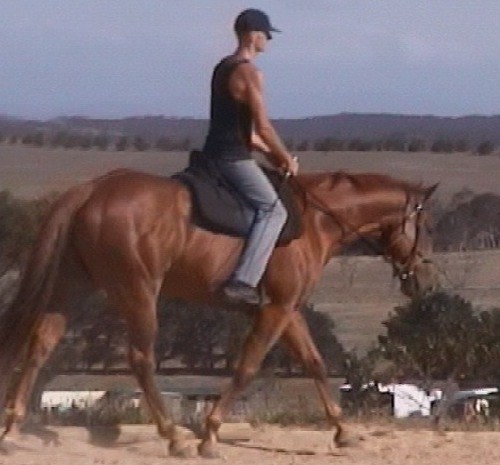 An off-the-track galloper, in the arena in preparation for his new life as a companion and trail horse, clearly shows positive dissociation.

To understand how trimming and conditioning affect stride efficiency, and how this is demonstrated by positive dissociation, we need to understand the component phases of each stride:

1. The flight phase is entire period of the stride where the hoof is in the air.

We want our efficient horse to spend more of each stride in the flight phase and less in the support phase. 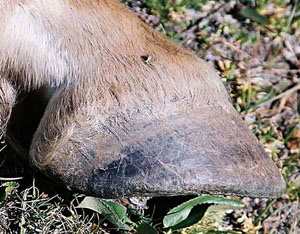 A physiologically correct barefoot trim aids efficiency for a number of reasons, including:

3. Scoops in the quarters and toe add biomechanical efficiency; and

4. A shorter toe has greater surface area for propulsion and ensures a more efficient flight path.

Let’s look at each in turn.

When at rest, your horse employs his stay apparatus to maintain a standing position with minimum effort. The stay apparatus, in both the forelimbs and hindlimbs, involves ligaments, tendons and muscles that align in unison to counterbalance both gravity and bodyweight. Incorrect hoof alignment will misalign the stay apparatus, reducing its effectiveness: your horse must now employ muscular effort even when resting. Obviously, this reduces his overall efficiency. By barefoot standards, nearly every shod horse shows anterior/posterior imbalance and some degree of digital descent: these horses are working harder, even at rest.

In movement, horses are not able to protract the foreleg quickly enough to position the hoof for the support phase by muscular contraction alone. Instead, protraction results from a catapult type action of certain muscles, like the biceps muscle of the forelimb, that store and release energy like an elastic band – they function like tendons. These very same muscles are also involved in the stay apparatus. So dysfunction of the stay apparatus due to hoof imbalance also reduces the elastic action of the muscles protracting the limb. The horse must engage more muscular effort, which is very fatiguing. 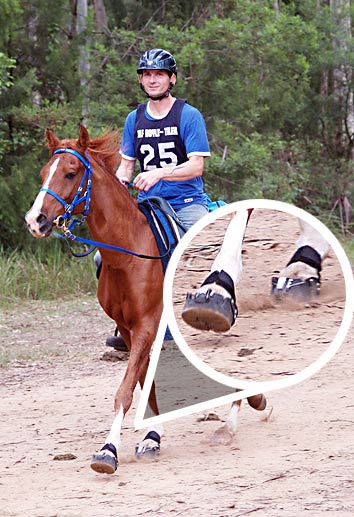 1. On uphills horses land toe first. This is because there is less time for flight phase, so the foreleg never fully extends;

2. On downhills most horses land heel first. There is more time for flight phase, so the foreleg more fully extends;

A heel first landing, with heels expanded due to the scooped quarter, allows the breaking phase to flow more smoothly and quickly into the stance phase of support. This reduces the overall time spent in the support phase and increases the time spent in flight phase.

As just mentioned, the scooped quarters allow the heels to expand on hoof impact, expediting flow through the support phase of a stride. That scooped shape also provides your horse with increased power when travelling on yielding terrain such as turf, sand or steppe, in the same way that your cupped hand increases your power when swimming.

During the breaking and stance components of the support phase, the quarters experience increased abrasion as the heels expand on hoof impact. Similarly, the toe experiences increased abrasion during the break-over and the propulsive components of support phase. High-mileage barefoot (unbooted) horses often develop a toe-scoop on their front feet: a slight depression of the hoof wall and sole at the toe between (roughly) 10 and 2 o’clock. Like the quarters, this toe scoop simply reflects an area of high wear.

On firm but yielding surfaces such as turf, gravel, sand or steppe, the slightly longer toe at 10 and 2 o’clock displaces substrate from the side toward the hoof midline. This increases the surface resistance to the hoof at the end of the propulsive phase resulting in increased efficiency: the hoof moves over the surface rather than through it. Conceivably, you could design a desert racing boot, with the break-over further back and a toe scoop that mimics these natural characteristics, for those UAE horses racing 100 miles at fast speeds and requiring the protection a hoof boot provides…

In the absence of slow-motion video, the easiest way to assess vertical oscillation is to tack your horse up trot him out: take note of vertical (up and down) movement of both his head and his saddle. The head or saddle moving up or down, relative to the ground, indicates wasted energy and increased likelihood of injury. 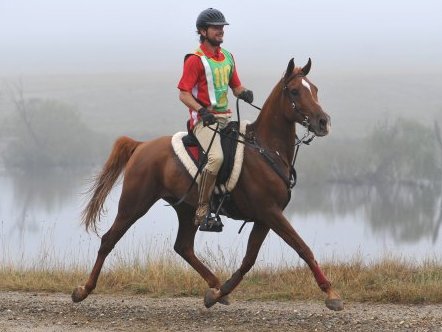 A typically shod endurance horse demonstrates a flight path that is inefficient and increases the likelihood of long-term injury.

Your long toed horse has a longer stride. This is because the long toe, with flat or toe first landing, does not roll smoothly from the breaking to stance phase and experiences a delayed break-over for a longer support phase. So the flight phase begins with the leg further back under the horse. This is inefficient. It is also associated with a slower tempo (due to increased support phase and inability of the protractor muscles to work elastically as tendons).

So it is clear that for a number of reasons a correct barefoot trim will increase the time in flight phase and decrease the time in support phase. The foreleg will break-over more quickly, which is reflected in increased positive dissociation. However, even well trimmed and managed horses can be seen to move inefficiently.

A well trimmed endurance horse showing negative dissociation, the right-fore is going to hit the ground before the left-hind. You need to assess if this is simply a momentary loss of balance or a habitual way of going. 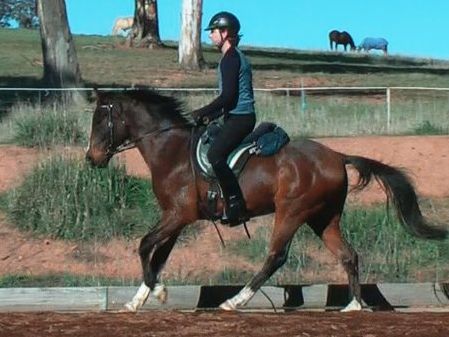 A horse that travels to much on the forehand, either as a general way of going or as a momentary loss of balance, will demonstrate negative dissociation. 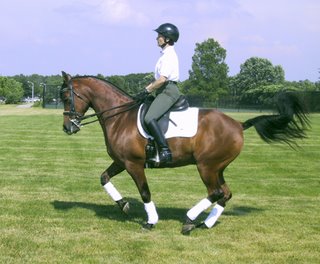 This horse is developing piaffe, a movement requiring a high degree of collection. However this photo captures a decided lack of balance, with too much weight on the forehand and the horse is triangulating with the foreleg well back under the body and the hoof stuck in support phase.

Another way to increase stride efficiency, with resulting positive dissociation, is to train your horse to both push and carry more from the hindquarter and so allow the foreleg to cycle through the support phase more quickly. Correct dressage training is an excellent way to do this. Accelerations at trot are also effective: trot steadily and then, suddenly, trot much faster for a short period before resuming the steady trot – repeat several times. Indeed, accelerations are commonly employed by standardbred trainers to improve the performance of their racehorses, to the extent that some trotters, travelling at race speeds, reach and carry so much with their hind end that for some strides the foreleg simply cycles through the air and doesn’t touch the ground at all. Hill work is also advantageous for developing stride efficiency. When travelling uphill, the weight shift from gravity mostly increases the demand on the hindquarter but also on the foreleg extensors. Extra strength developed on hills means increased efficiency on the flat. Also, when travelling uphill, the support phase is shorter, mostly because the breaking phase is reduced or eliminated completely and the propulsive phase increased.

So there you have it, a barefoot trim and a little specific conditioning will enable your horse to move more efficiently down the trail. And you will see this increased efficiency by watching for positive dissociation.