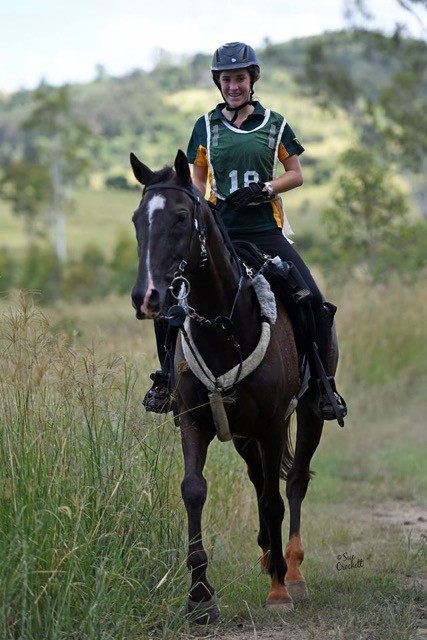 Tahlia Franke is counting the days until the 2016 Western States Trail Ride, more popularly known as the Tevis Cup. The 17-year-old from Toowoomba, Queensland, Australia, is one of ten junior riders whose entry into the prestigious endurance race is being sponsored by EasyCare. The race will be held July 23rd.

Franke has long dreamed of someday riding the Tevis. “Competing in the Tevis has always been a dream of mine since I first heard of it and something I never dreamt of being able to do as a junior rider,” says Franke, who will turn 18 a week after the ride. “The difficulty of the ride has attracted me to it even more. I have always loved the more difficult rides, though I’m certain nothing I have done will come close to the Tevis and that is something I am very excited about.”

Franke was Australia’s top-ranked junior rider in 2014 and 2015. Her record includes 38 50- to 75-mile competitions, with eight wins plus 11 top-10 finishes. She has completed three 100-mile races, including first-place junior and best condition at the New South Wales (NSW) State Championships in 2014. She has ridden on the Queensland junior team competing in the Southern Cross Challenge three times.

Despite her record and experience, the Tevis will be an entirely new and different experience for her.

“I have never done a ride that doesn’t finish where it starts, so this aspect in particular will be one of many completely new experiences that have me nervous but of course excited to see how everything works,” she says.

Franke will ride M Dash Stellar, aka “Stella.” The 12-year-old Arabian mare (Sam Tiki+ x ES Dakota) has an impressive ride record, with 35 completions in 36 starts and three Tevis completions with three different riders. Her most notable finish was 3rd place in 2013 with Jenni Smith of Moraga, Ca.

Stella is owned by Jennifer Waitte of Napa, Ca., who is serving as Franke’s sponsor. Rules governing the ride require riders under age 18 to be accompanied by an adult. Waitte invited Franke to travel to the U.S. and compete in the ride after hearing about Franke’s accomplishments through a mutual friend.

“My original intention was to lease one of my two mares for Tevis,” explains Waitte. “They have been training and competing together for many years, and, as a result, ‘the whole is greater than the sum of the parts’. The two mares would each perform better at Tevis if they competed together.

“I broached the idea with Cris Jones, who is Australian and well-connected with the Australian endurance community. She put the word out and Tahlia’s name came up. This interested me because she is just 17 yet very accomplished in Australia. Under the circumstances, I didn’t think it was appropriate to lease a horse to her. Instead, I invited her to come to California and I would sponsor her by providing a horse, accommodations and crew … everything she would need to compete.”

Waitte says that sponsoring Franke has completely changed her focus on the rider. “This is a great opportunity for Tahlia, but also for me,” Waitte says.  “I’ve never sponsored a junior rider before and I am determined to get her to the finish line.”

Franke will arrive in the U.S. on Monday, July 18. She will attend the international riders’ dinner in Auburn on July 19th. On July 20th, the EasyCare Elite Team will apply Stella’s Glue-On boots for the race.

“Stella has been competing in Easyboot Gloves and Glue-Ons for five years now,” says Waitte. “I typically apply Glue-Ons for races myself, however, I want Tahlia to meet the EasyCare team in Auburn before the race, and so I’m having them apply the boots.”

Waitte has been keeping Tahlia apprised of Stella’s training and racing progress. “Even though she’s half way around the world, she is still part of the team,” says Waitte. I’ve been sending her regular updates, pictures and videos.”