This ride actually took place on Saturday September 26, and it’s taken me this long to write it up!

My friend and fellow Mounted Search and Rescue member, Melissa, brought her TWH mare Peek-A-Boo over so she could ride with Zephyr and me.  She thought she knew what she was getting into, but maybe she should have talked with my friend Kerry first.

First things first… I booted Zephyr on the front feet, and left him barefoot behind.  He’s still wearing Size 2 Gloves on the front, but they’re starting to fit a lot better in the heel now that I’m getting his hoof flares back under control.  Also, now that they’re a little broken in, I’m able to get the gaiters fastened tightly straight across!  Some of you may remember how hard I’ve struggled with that. 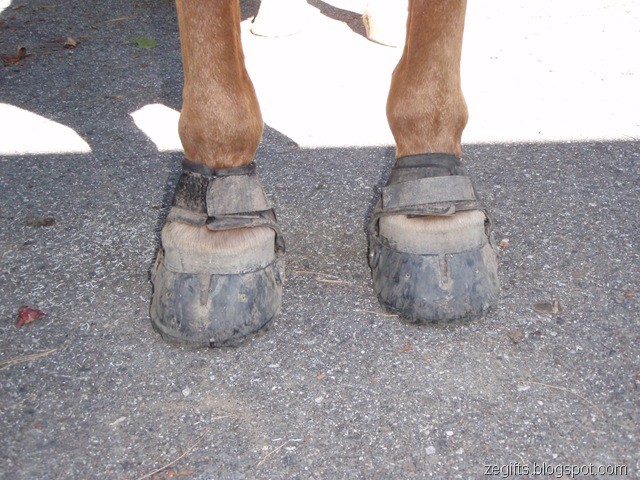 See how nice and tight they are? 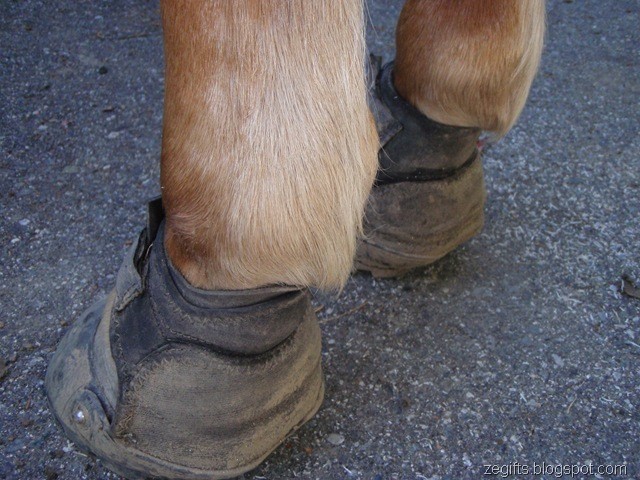 I was running late and couldn’t find my windbreaker, but it was so sunny and warm that I figured I’d be ok without it.  We headed out on the one trail that leads straight off my property.  The trail is a little rough but I love the two stream crossings, it’s a great chance to get the horses to drink.  And they always do, even though it’s just a few minutes after leaving home.

After a nice uphill stretch on a paved road, a long camp road, and a nice grassy trail, we came to the start of my Orrington trail loop.  It’s part of the #107 snowmobile trail, maintained by the Bucksport snowmobile club.  Unfortunately, a lot of ATV riders use it, so it’s plenty rocky!  Melissa says rocks sure do grow well around these here parts.

This picture is of one of the REALLY GOOD sections. 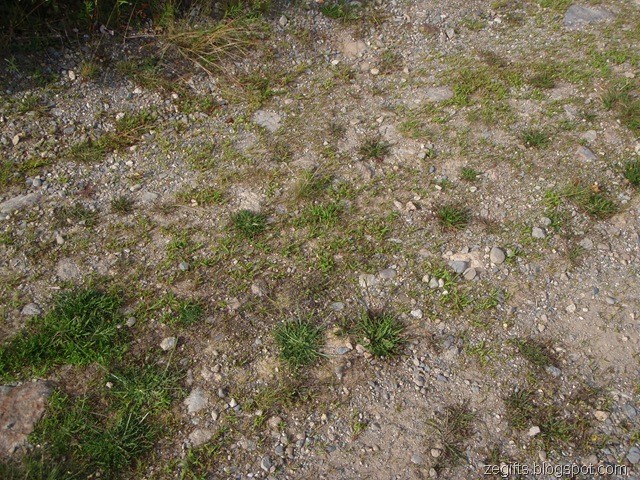 The view is worth it, though! 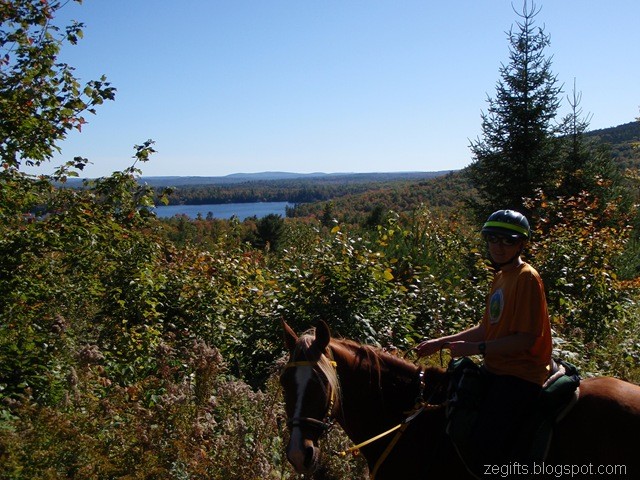 After a short while, we turned right onto the Orrington Snowmobile Club trails, which I don’t know as well as I know my normal loop.  I wanted to finally make it all the way to the top of King’s Mountain… last fall I made it most of the way before having to turn back because it was getting dark.

The trails were much less rocky and much better maintained, but I had forgotten how steep some of the latter part was. 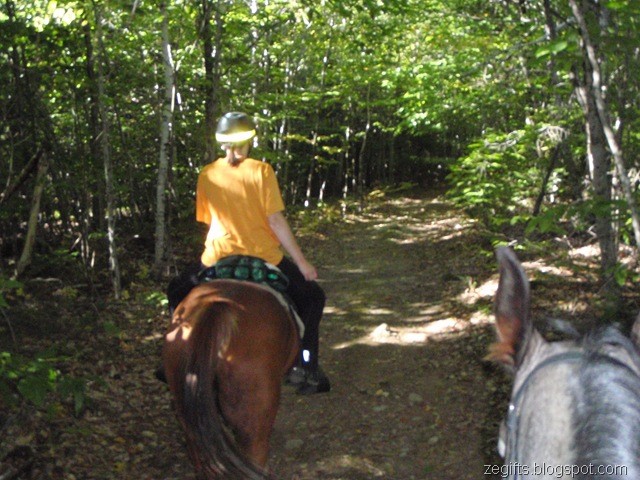 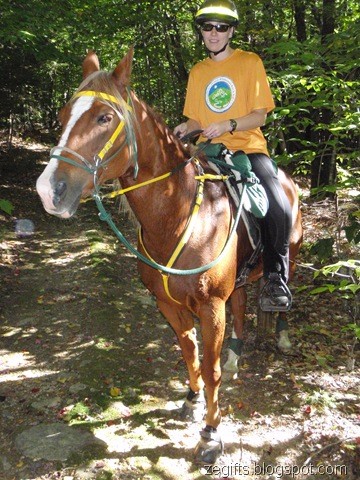 Right after this shot was taken, I looked down and realized one of the gaiter screws was missing from the side of Zephyr’s left hoof boot.  Whoops!  I checked the other boot, and one of those was loose, so I tightened it with my nail clippers.  I really must put my multi-tool in my everyday saddle packs!! I worried that the boot would come off because of the steep uphill section but it stayed on. 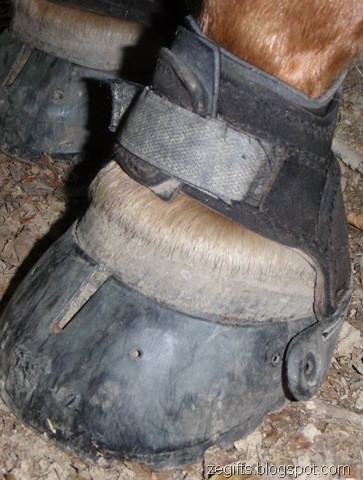 We popped out on top of King’s Mountain and were treated to a lovely view of Bangor/Brewer/Orrington. 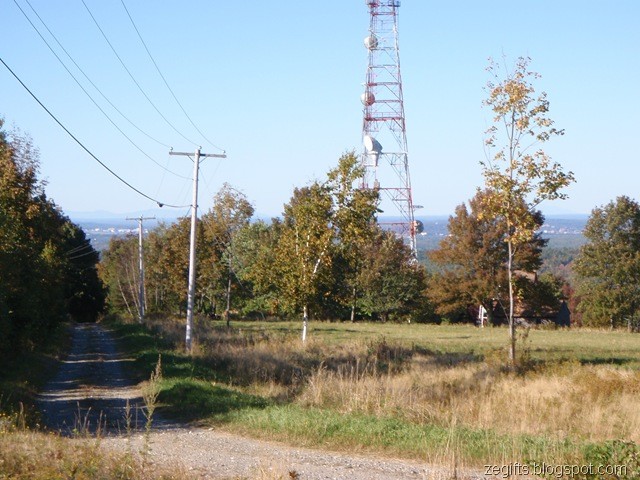 I told Melissa that we had two choices.  First, we could turn around and go back the way we had come, but it was pretty rough and I was already missing one boot screw and was afraid I’d soon be missing more… I just couldn’t tighten them well enough with the end of my nail clippers.  Second, we could continue straight and “connect the dots” between where we were and my (somewhat shorter) existing Orrington loop… that would result in mostly road riding (paved and dirt) and would be easier to go boot-less if I had to.  I confessed that I wasn’t sure exactly how far it was, but insisted that I was sure of the route.  We agreed to continue forward.

When we came out to the paved road down the other side of King’s Mountain, we got an even nicer view! 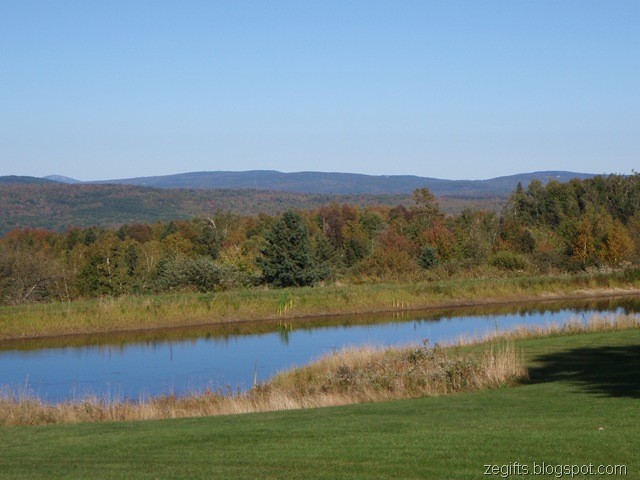 Right about this point, I turned to Melissa and said, “Have you ever had a moment where you suddenly thought, I have just made the wrong choice?”  We laughed about it but kept going.  Halfway down the King’s Mountain road I decided to remove the boots, as they were making a weird clunking sound and I was afraid they were affecting his way of going.  Unfortunately my packs were too small to stow the boots, so Melissa was kind enough to make room for them in her pack.

When we got to the bottom of the paved road, it was 3:45pm.  I turned to Melissa and offered one more choice… we could turn right and follow that paved road to my house, or we could turn left and connect the dots to my shorter Orrington loop.  We agreed that the traffic on my road was too fast and that the light would be fading soon enough to make it not safe for riding.  Left we went.

We were only on the busy road for a quarter-mile or so before we turned onto a private dirt road named Swett’s Pond Road.  It crossed under a set of power lines, and although I had planned to continue to Betts Road (the farthest reaches of my previous Orrington loop), I was unable to resist this “shortcut”.  I had looked at my GPS and couldn’t see Betts Road on it, so I didn’t know how far it was, and was starting to get nervous that it was farther away than I’d thought.  The power lines seemed like a safer choice. 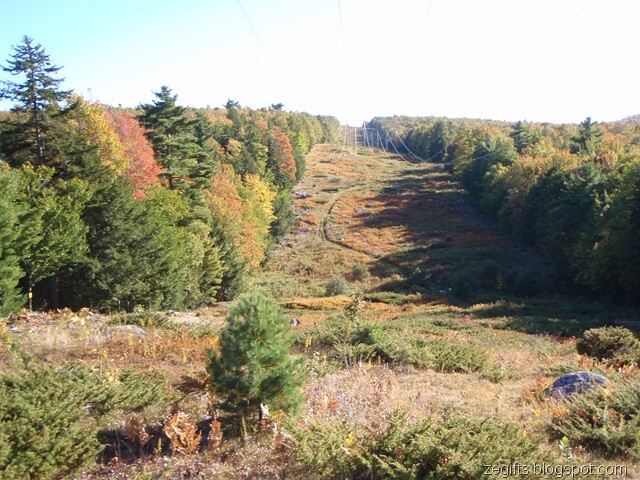 We followed it for a while until we crossed a second set of power lines, which seemed to point more directly towards home.  So we went that way until we were stopped by both an un-crossable river and the sound of gunshots!  It would have been ok if it was just one gunshot now and then, but it was obviously someone target-shooting quite nearby.  I don’t know whether Peek/Melissa were reacting to the sound, but I flinched every time and it was making Zephyr nervous.  We might have opted to turn around even without the un-crossable river, and even if we were covered in blaze orange (which we weren’t)!

When we got back to Swett’s Pond Road, we stopped and asked someone in their yard how far it was to Betts Road.  They thought it was about a mile, so off we went.

The rocks on the dirt road got pretty big, and I stopped to put Zephyr’s boots back on again.  He was then able to trot, and we made up some time.

We rode for a while, then a while longer, then a while after that.  Eventually the road we were on turned to pavement.  We kept riding.  We asked someone how far it was to Betts Road, and they told us “about a mile”.  Oh NO.  We finally did see a light at the end of the tunnel as it became clear that we were riding around the far end of Swett’s Pond.  Surely Betts Road would be on the far side of the pond.

We rode for a while longer before we finally got to turn left onto Betts Road, which in my memory was dirt.

It was paved.  Oh NO.  That’s right, I had forgotten there was a long stretch of pavement before Betts turned to dirt!

We did get to see some more nice scenery though. 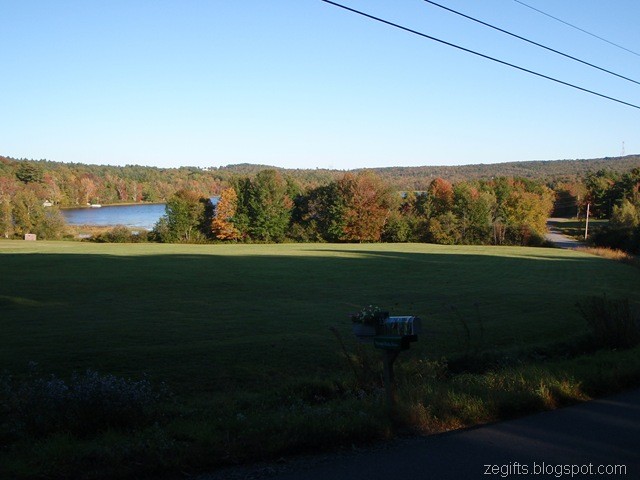 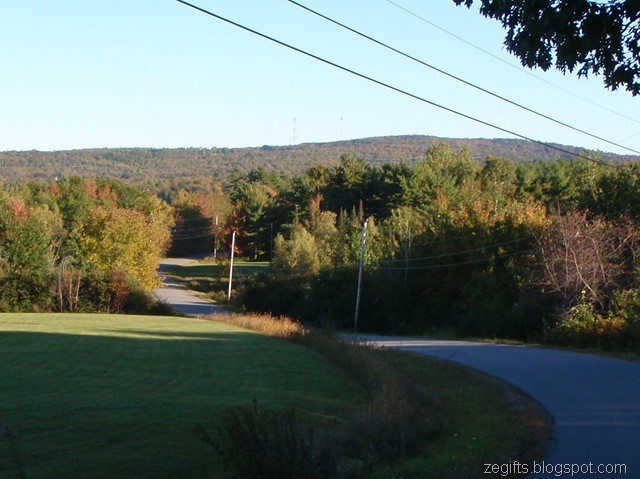 If you can see them, note the towers on the far right on the first shot above… and on the hill in the center of the second shot above. You’ve seen them before… ohhhhh NOOOOO!  Did we really come all that way farther around from there?  It was 5:30pm at this point.  I was starting to get really cold in my T-shirt, and wishing I’d at least opted for my usual long-sleeve polypropylene shirt.  The sun was low in the sky, and would be setting in another 2 hours.  We had been riding since around 1pm.  It was DEFINITELY time to make tracks for home!

Just about that time, I looked down and realized that BOTH hoof boots were now missing their left-side gaiter screw.  Oh darn.  Well, they were staying put for now, so off we went.

We trotted most of the way along Betts Road.  Eventually it DID turn to dirt, and unfortunately I made a couple of wrong turns that cost us probably another 20-30 minutes before we ended up on the right trail home… which AGAIN was longer and rockier than I’d remembered.  I was glad Zephyr still had his boots on.

Finally, we came out on a trail that was familiar from earlier in the day.  It was twilight as we cantered up a long rocky slope.  A short distance up the hill, Zephyr’s hoof boots started making a very odd noise and he started to hop.  When I looked down I realized that the right hoof boot (with the old style gaiter) had come off his hoof, spun around, and was riding on the front of his hoof upside down.  The boot with the new style gaiter, which if you recall had lost one of its screws much earlier in the ride, was still in place.  Interesting test, with interesting results!  I got off and removed both boots, and Melissa stuffed them back in her pack for the rest of the trip home.  Luckily, the rest of the way was going to be along the side of the road, so Zephyr would be fine barefoot.

In fact, he was better than fine.  He boogied down that 2-mile paved road (all downhill) doing a rack or foxtrot the whole time!  He almost never does that for so long at once, and I was thrilled to discover that he had enough energy left.  He really needs to be “up” to do it, and ever since our last endurance ride in July I really haven’t ridden him much at all.  Melissa’s mare was pretty well pooped out, so Zephyr and I would ride ahead, then stop and wait, then ride ahead again.  You should have seen the Gaited Grin on my face!  He was REALLY smooth and pretty fast too!

When we made the turn onto the last paved road before the woods trail to home, it was really getting dark.  I was glad I had the reflective strap around my helmet.  There weren’t many cars, but their headlights were bright enough against the dark to blind us momentarily when they passed.

We knew it would be pitch black in the woods, so as we turned onto the trail for home, Melissa got out her headlamp and put the batteries in it.  (She stores it without batteries to make them last longer.)  I was glad she had it, not to help the horses see the trail, but to alert me to branches in my face!  Zephyr and I were in the lead, and he walked along quickly no matter how twisty/rocky/root-covered the trail got.  He never hesitated, not even for the go-rounds around downed trees.  But there were a lot of low-hanging branches, and the brief flashes of Melissa’s headlamp were enough to keep me ducking at the right times.

We crossed both streams easily, though it turned out that Peek pulled a front shoe as she crossed the second stream right onto my lawn. Bummer!  But at least we were all done then!

When we got home it was 7:30 and full-on dark.  We had ridden for 6.5 hours (30 minutes longer than I took to ride the 2007 Pine Tree 50-mile endurance ride!) and gone a little over 20 miles according to the GPS.  Melissa and I both agreed, though, that despite the cold, the dark, and the beginnings of some real hunger, we had both had a wonderful time and would always remember this unique ride.

PS… since then, Melissa bought a pair of Easyboot Gloves!