Home Easyboots Glove Horse B – Roo Gets the Last Laugh
Share
Facebook
Twitter
Pinterest
Linkedin
Email
By late May 2009, Roo was declared “A Perfect Fit”, footwear-wise. I’d figured out to trim off toe and smoosh his back feet into a smaller pair of Gloves, and I’d discovered that he has uneven front feet so needed a half-size smaller on one side. From here on I knew “without a doubt that I would have no further boot problems”.
<snicker>

With the above in mind, it was time to ramp up our Tevis-training.

Patrick and I decided to ride California Loop, the ~18 mile stretch between Foresthill and Driver’s Flat. CA Loop follows an old flume trail on a narrow singletrack high along the canyon, dropping a few hundred feet every so often in a series of switchbacks until you reach the river, before making the final 1000′ climb up to Driver’s Flat. This section of trail is a little nervous-making due to the drop-offs but is not terribly technical per se. 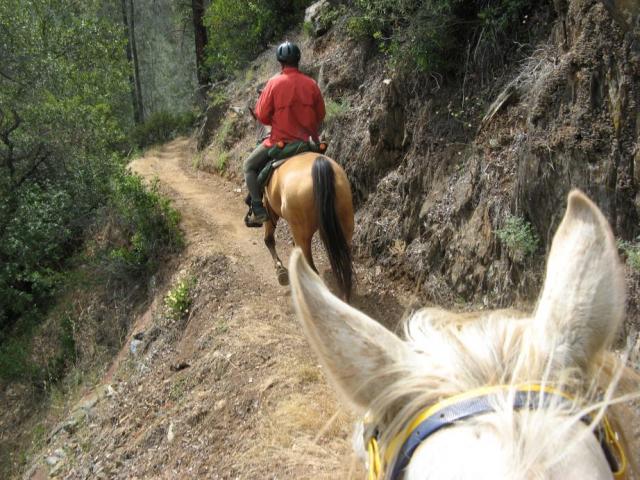 “Cal-1”. By the time most Tevis riders get here, it’s pretty dark – unless they are running up front, which wouldn’t be us by any stretch of the imagination. My carefully crafted schedule (borrowed from a friend who’d completed the ride successfully two years before) had us on this part of the trail around 10 pm.

It’s good to have pre-ridden this section so you and your horse are somewhat familiar with the trail – however many riders refuse to ride it during the daylight, preferring not to be able to see what they miss in the dark. 🙂 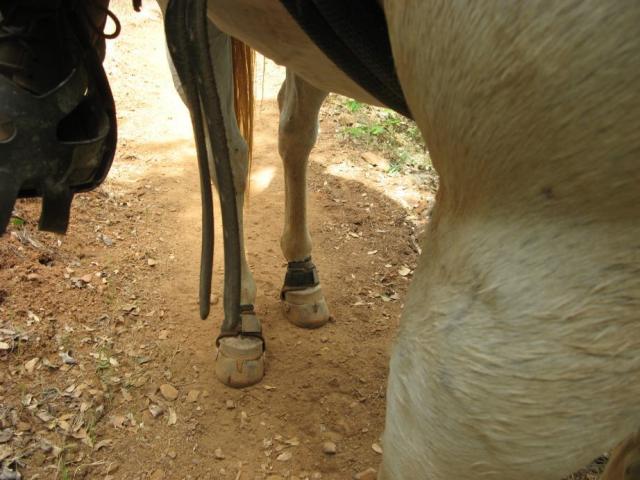 Boot check to see how Roo’s rears were holding up – still present and correct, despite having just scaled one of the only steep uphills on this part of the Western States Trail (WST). 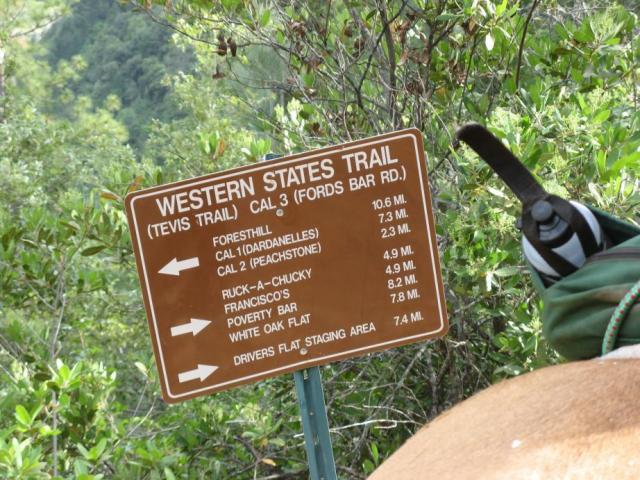 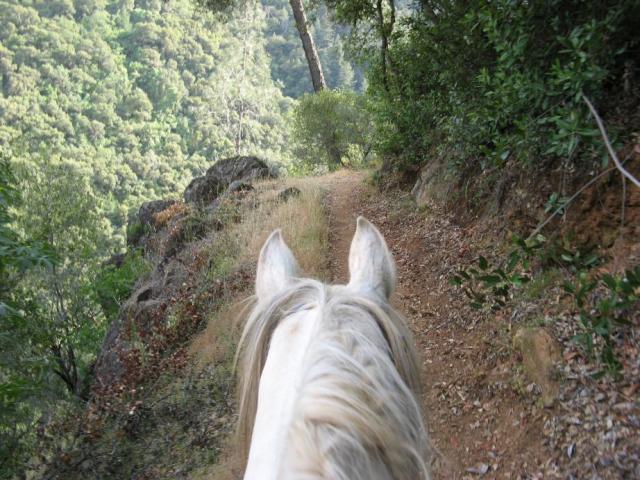 This is the part I am least comfortable with – they forgot to plant those little bushes that will do nothing to break your fall, but give you a happy false sense of security. 🙂 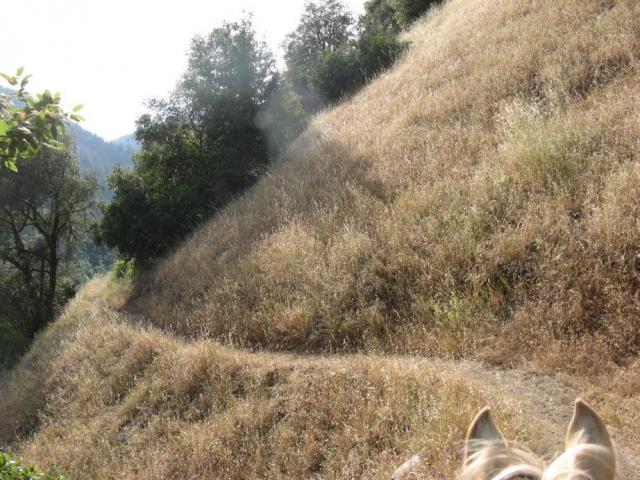 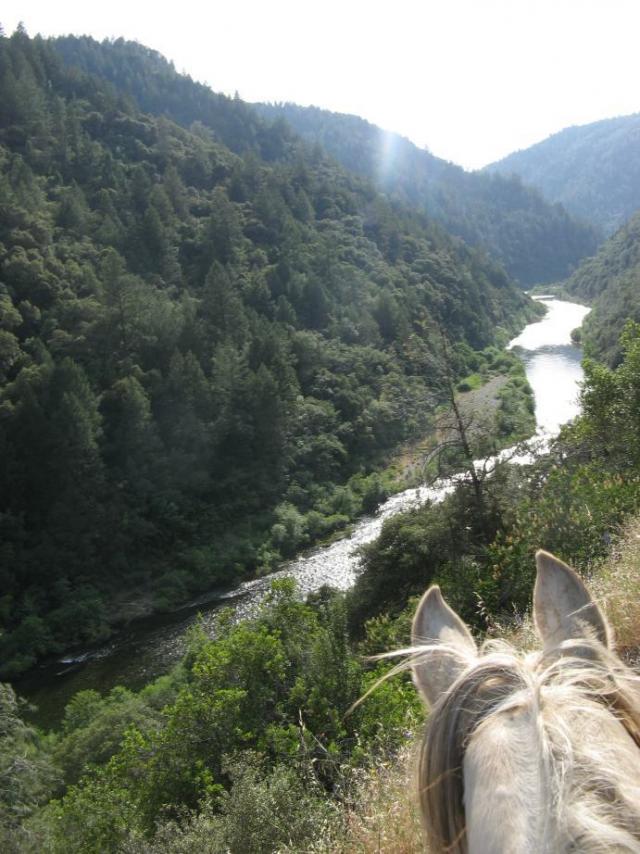 It’s also one of the most scenic sections of the trail as you get down towards the river. 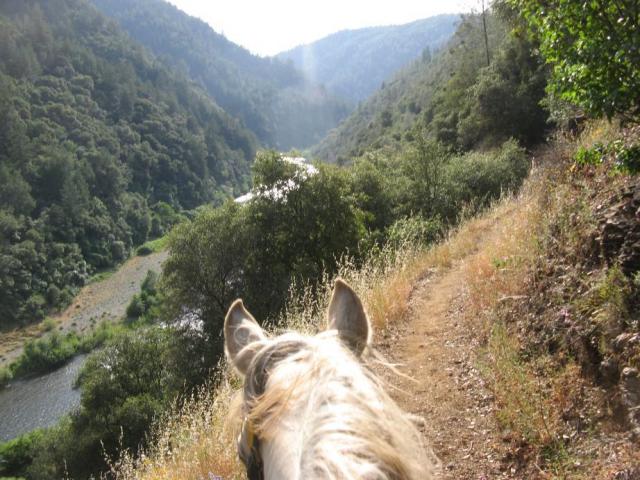 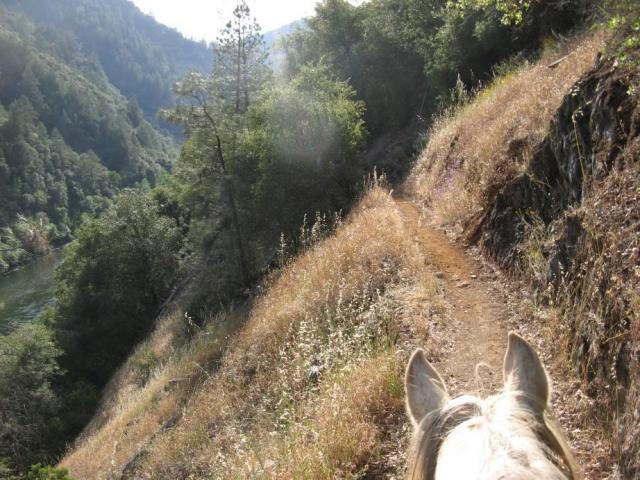 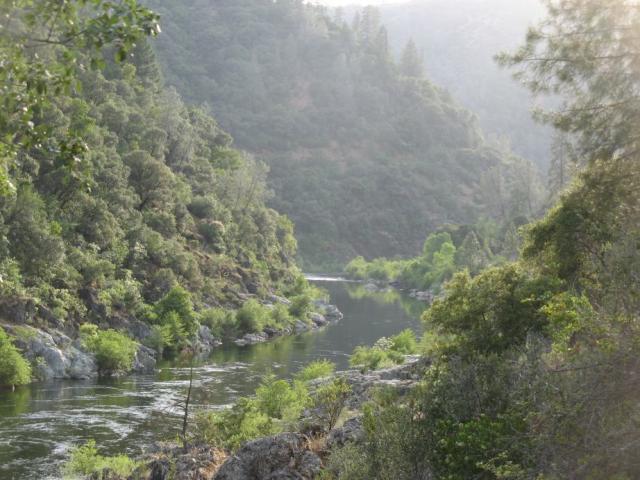 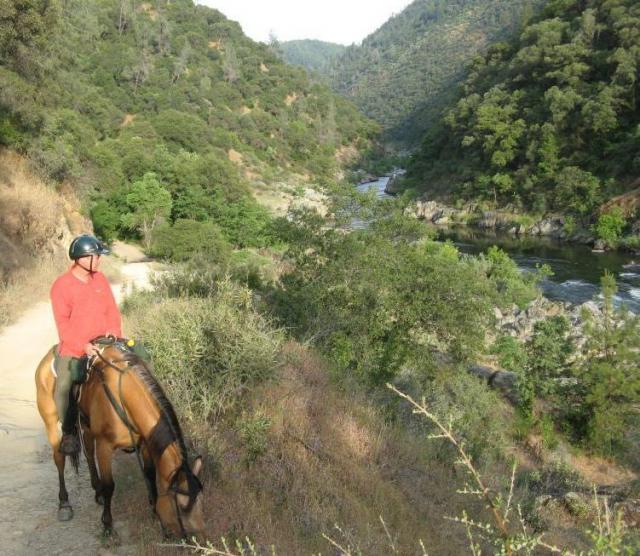 We had a great day’s riding – the flowers were pretty, the weather perfect, the pones well-behaved and cheerful. And I was very pleased that neither Fergus’ nor Roo’s boots had moved the whole time …until it came time to take Roo’s boots off.

Yanking the rears off at the top of the canyon, I discovered that they were minus their toes. Despite having gone such a relatively short distance, the boots would only be good for a few more short trail rides and then he’d be coming right through the front of them. 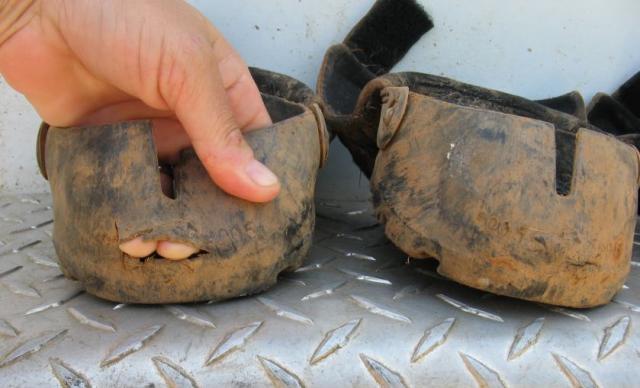 There was no way Roo could wear boots for the 100 miles of Tevis if a mere 18 miles of the milder parts of the WST did this to the toes. We’d have to go back to shoes. To say I was discouraged would be an understatement.

And then I got Garrett on the phone. He explained that they’d had other horses do this to the toes – his own horse included – so they had redesigned the front area of the boot to be much thicker and tougher.

I was unconvinced and suffering from pre-Tevis “everything has to be perfect” mania. Looking at the calendar, I was running out of time to get the boot thing right before I’d have to give up and put Roo back in shoes. <wibble>

Garrett promised me that they’d have the thicker toe shells by July and, with a bad tummy, I agreed to hold off on going back to shoes.

My next experiment would be gluing on boots. I still needed to test that aspect out in real competition so picked the Cooley Ranch ride – the closest thing I could find to replicating vertical climbs and steep descents we would be putting the boots through on the day. We still wouldn’t have the reinforced toes by then, but could at least see how gluing the boots on would go.

To recap: in the real world the natural order of boots goes:

Roo and Lucy vie to see who can get more glue on themselves.