Home Success Stories Meeting Team Easyboot 2011 Members: Natalie Herman
Share
Facebook
Twitter
Pinterest
Linkedin
Email
So, you think boots are nothing for a real trail rider or packer? You think your kind of riding is impossible in anything but steel shoes? Think again! 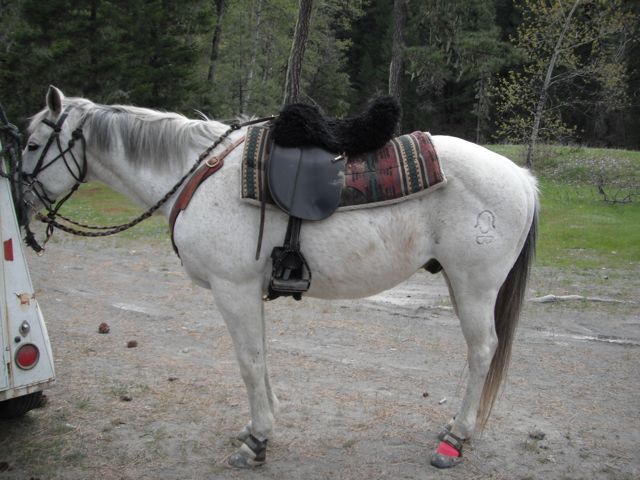 Clyde Ready to go in his boots.

Out here in the Wild Wild West of the Northern California mountains (shaped by tectonic and volcanic forces, and the addition of coastal weather erosion, these are “Man from Snowy River” style mountains), we do more than trail riding…we do EMT…Extreme Mountain Trails. If you make mistakes out here, you will likely need an EMT of another sort. 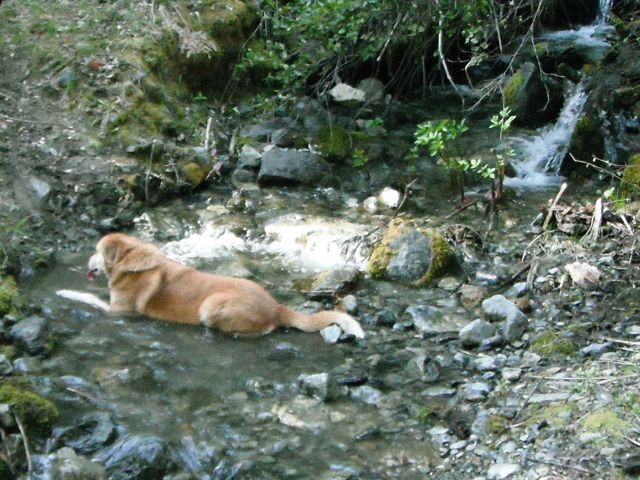 The dogs even get tuckered out in this terrain… drink and cool off at the same time, smart pup!

This means your horse and yourself better be in good shape, and be well trained, and your equipment better work right and hold up. There is no room for error out here, and the only way our for humans is maybe life-flight (nearest hospital is almost 3 hours by car, same for the nearest vet), and horses…well, let’s just say there’s no vet that will get to you in time, if you make a mistake. 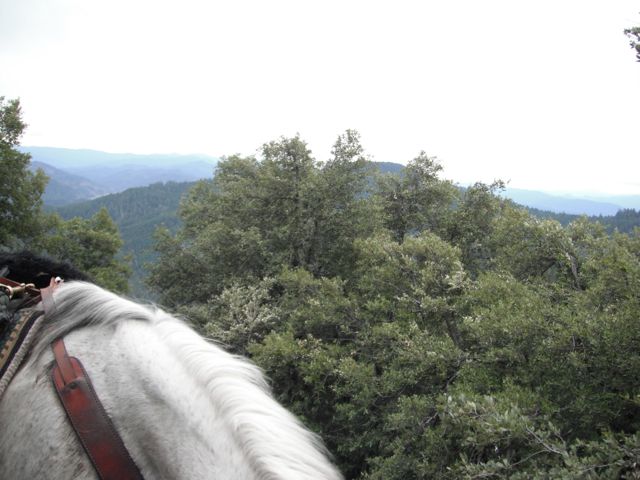 Here I tried to capture the view of the mountains in the distance. Not easy while standing on a slope I was sliding off of with every step.

I get to come to this wonderful part of the world at least once a month, since I just started doing ’rounds’ up here (in the vicinity of Ruth Lake, off Hwy 36, to give you a general idea on Google Earth) to trim horses. To make it worth my drive, I stay a weekend and get to ride with my friend (and ‘home base’ out here while trimming and riding, and my mountain trail guide) Willi, who has explored many hidden areas of these mountains. After a day of work, we then get to go play 🙂 And it is a mighty big playground! 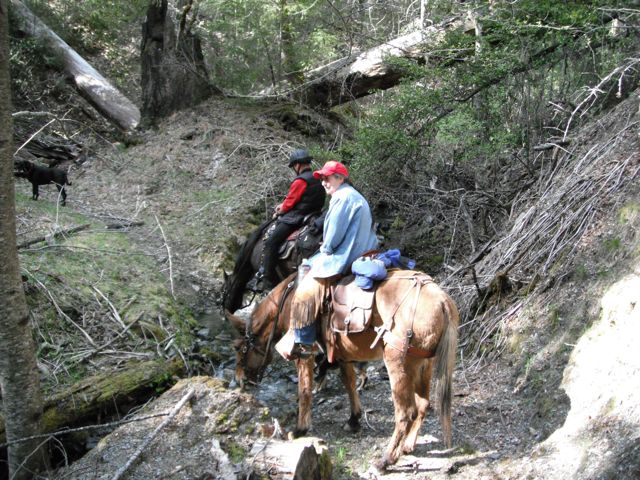 Up front, Willi on his Kentucky Mountain mare Little, in boots. Then Julie on her mule, who is waiting for his boots to arrive (but did fine bare on this easy trail…not much gravel here). One of our many creek crossings…

One of the days we went on a fairly easy, single track trail named “Hell Gate”. Hmmm…I thought it was lovely, and can’t figure why it got that name. It mostly follows a river (the Eel I think?) and you cross lots of creeks that flow into the river (with slippery rock bottoms, beautiful little waterfalls, and neat foot bridges) and meanders through both open timber stands and tighter oak/scrub brush areas. 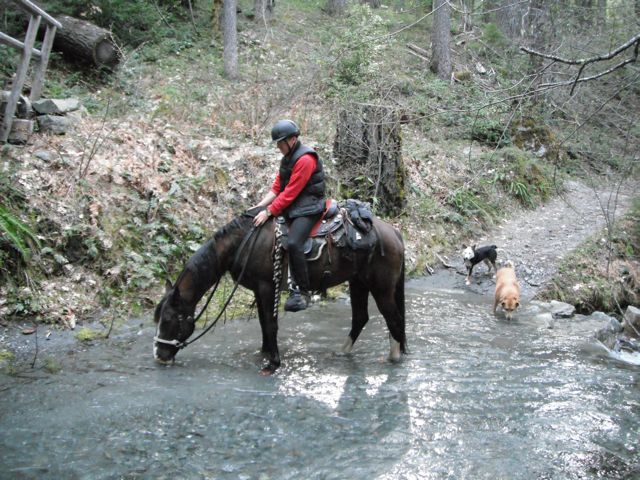 Willi and Little in another creek..so clear you can see her boots 🙂 But cooolllld water! 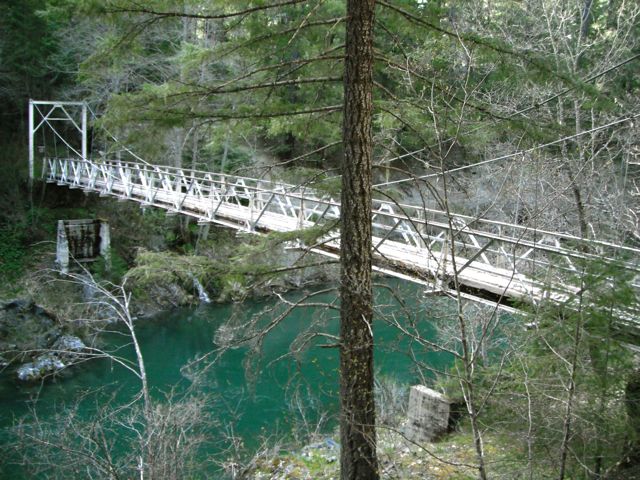 This was the coolest bridge we had to cross over! The horses marched on over with no issues. 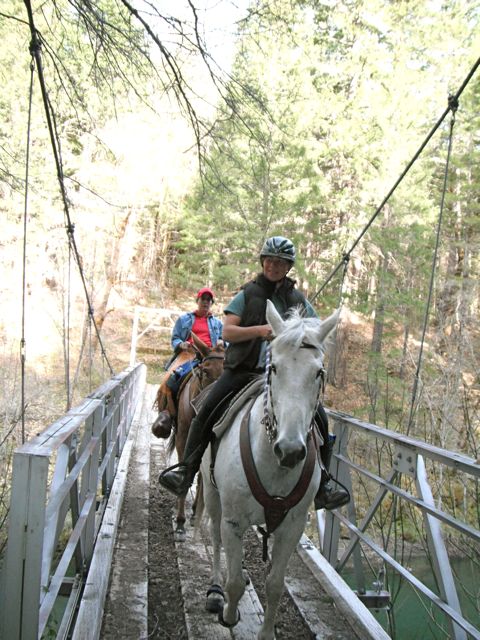 Clyde and me in the lead, Julie and Marge Mule behind…

We had lunch on the river bank, near the site of an old stone bridge. The trail was an old supply and mail trail that had serviced the area during the gold mining age and part of the lumber boom days. Nothing remained of the old home sites and the many ppl that must have been spread out in this river canyon, but the few scattered stones of home foundations, or clearings that had held buildings. Once in a while we saw an old orchard or even some wooden shacks of a little newer ranching history. This was a fun and historic trail ride. 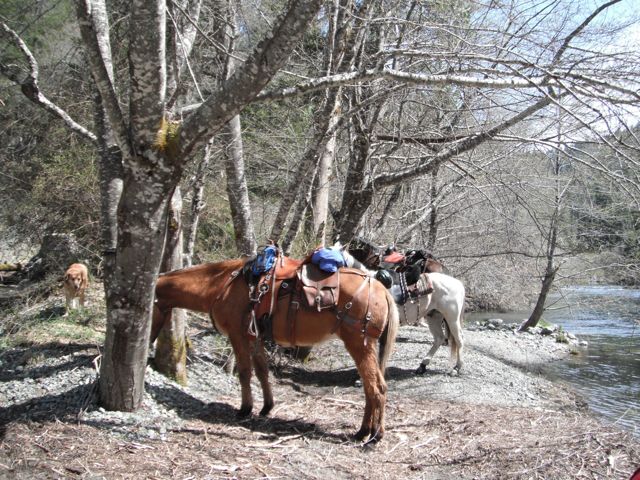 Lunch on the bank…my dressage saddle is a bit out of place in this line-up, LOL 🙂 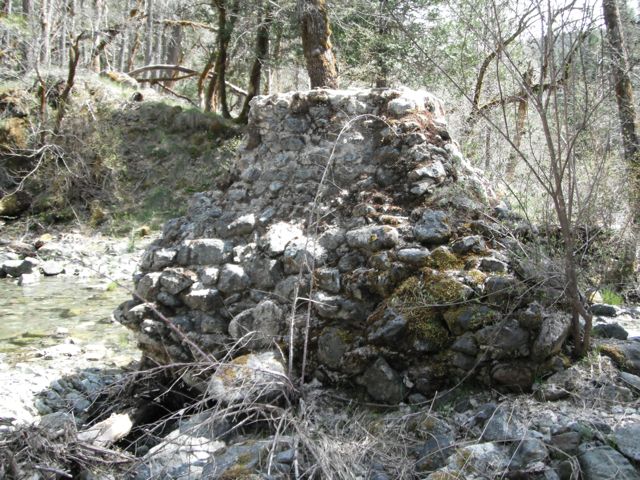 The old bridge pylon…all that is left of the bridge… 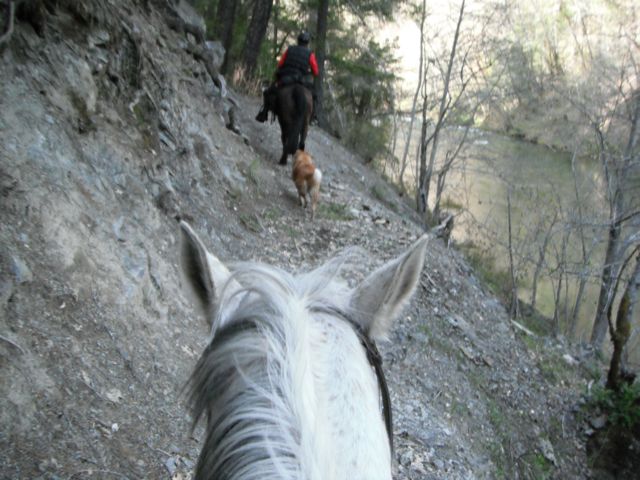 Some of the trail terrain…

Then on another trip up, Willi decided to take me exploring. He said that we were going to go looking for some trails and roads we might be able to use for a future endurance ride we fantasized about holding in the area. While we were out there, he talked about how all the old timers said there was an old Native hunting trail in that area, that connected the valley we were riding out of, to the next few over. But no one had a real answer for where it was, except off one of the forest service roads we were riding that day. The newer maps only had the roads and newer trails on them, and it was hard getting your hands on old maps of the area that still had the old trails. 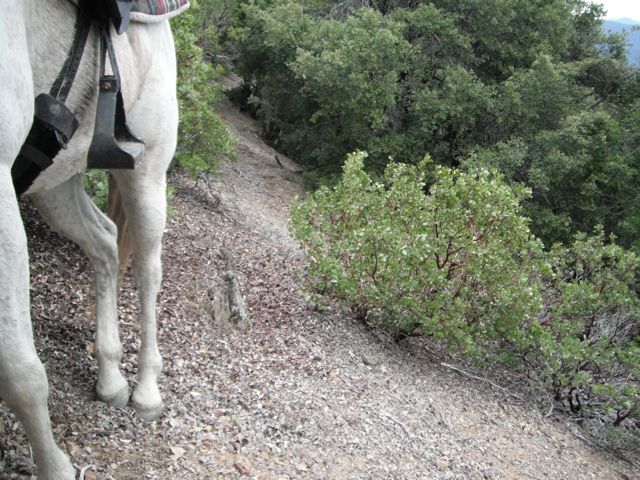 Well, we only had three branches of roads to explore that were public access, and all three ended in dead end turnarounds. But the last one we tried, had what looked like an ATV trail that was not oft used going up the ridge off of it. We hit the dead end and on the way back, decided to follow the ATV trail, as Willi said crossing the ridge would be heading in the right direction towards the valley we were wanting to connect to. The atv track wound it’s way in the timber, up the side of the ridge, first gradually, then steep and straight up towards the spine. It became less and less distinct as it wound its way up, and finally became a single track trail as it crested over the other side. Here, it slithered its way out into more of an open hillside, clinging onto the shale and dirt in the vain hope of still pulling off the image of being anything but a faint goat track on the side of a big mountain. 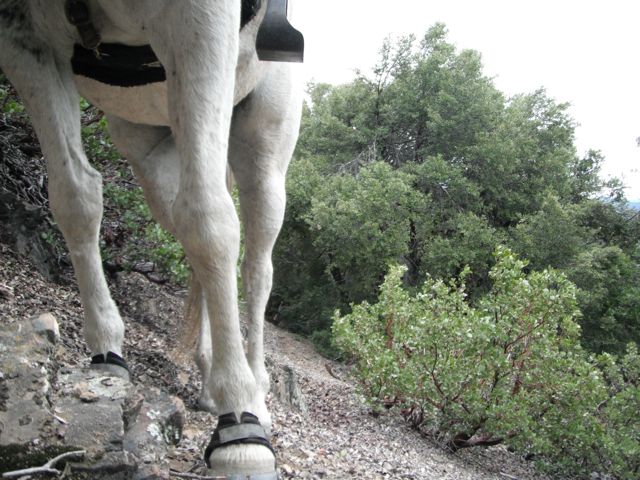 No… this horse does not have uneven knees… 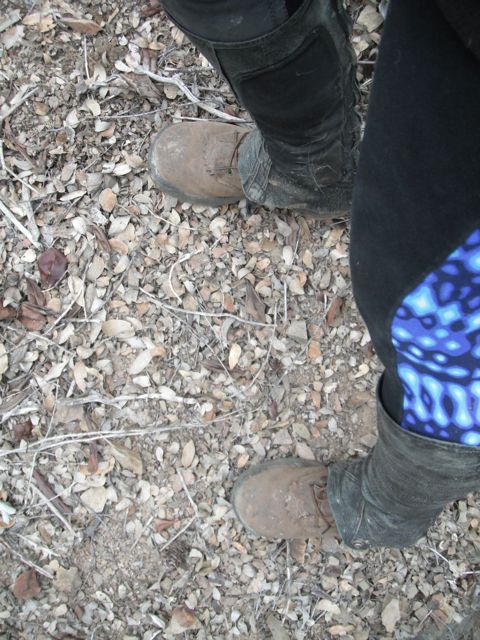 I was riding behind Willi, and had no clue where we were going, or what he was actually still following, and seriously questioning my sanity (whilst thouroughly enjoying the adrenaline rush of clinging to the side of a mountain, on a great horse, like an overgrown goat). Now we emerged into EMT country 🙂 And it sure is fun riding rough country like this…provided you are on a sure footed and level headed mount. And have the tack to do it in! 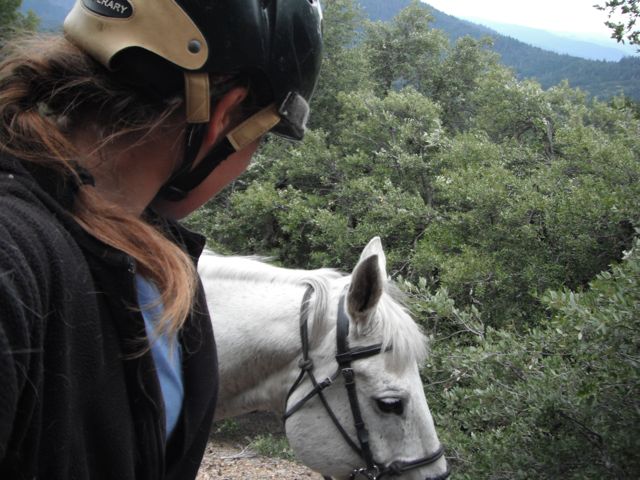 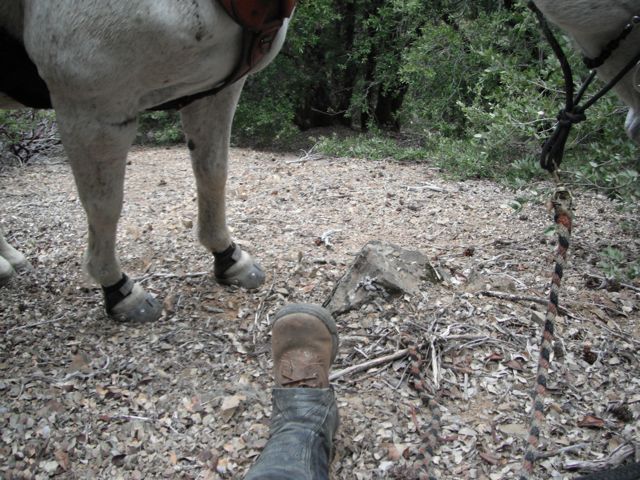 Shooting downslope… I had to sit down after a few minutes, as I kept slipping and my ankles were tired of holding me in the loose slope…

I had pulled the shoes on Willi’s horses maybe 6 months ago at best, and trimmed them up and fitted him in some Easyboot Gloves. We also slapped some powerstraps on, knowing all he does is rough terrain riding and there is hardly a flat trail out in his neck of the woods. Both his horses have done marvelously bare and in the boots, both EMT riding at home and going to endurance rides as well. And today, I saw how he puts them to the test… No matter the footing (up or down hill, through water, mud, dirt, rock, or whatever) and cutting through bushes and over deadfall to track a trail, and yes…clinging to the side of a mountain for dear life, the Gloves stayed on, provided comfortable and grippy footwear for the horses, and never gave us a hesitation or misstep out there, which in this kind of riding could prove disastrous. I already had used the Gloves for endurance riding a lot, or Glue Ons for multi-day rides. Now I knew that they would work for ANY kind of riding….if they withstood this test, then everything from the arena to the trail wouldn’t stand a chance. 🙂 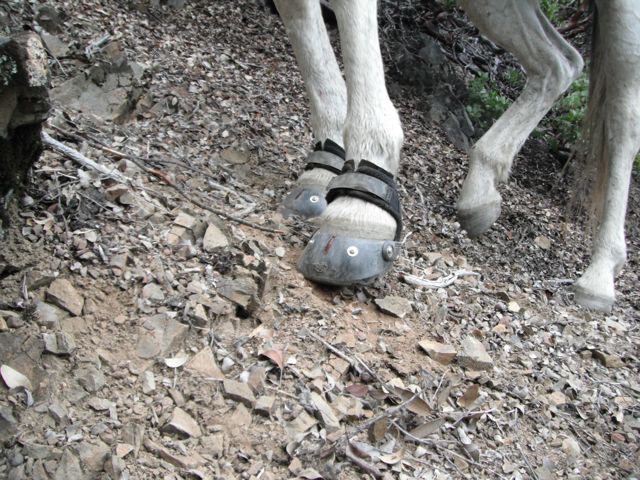 Clyde was clawed into the slope like a goat… and even then, his boots were not finding enough trail to hold onto. Luckily they hold onto that little bit of trail really well! 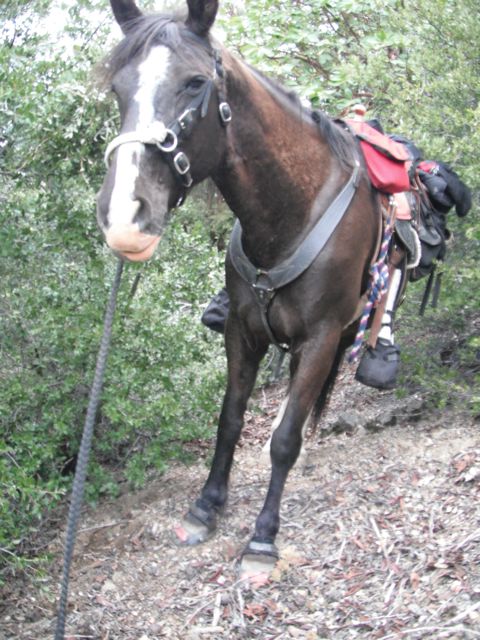 Little had one of the few flat(ish) spots on the trail…she managed to turn around here. The downed tree is pretty much behind her, and we had to get her backed into it, to get Clyde halfway onto her spot, so he could turn around too…

These are all pics of us on the side of the mountain, where we had to turn around (yes, right THERE…don’t ask me how the horses did it, but both of them got turned around and facing the right way without incidence) due to a large tree that needs to be cut out of the hillside. The neat thing is, is that Willi went exploring past the tree (while I took these pics) and said the trail looked like it kept going. And then at home on the map, we saw that the service road we had come off of, and a service road from the valley we were trying to get into, were less than a mile apart..and the atv track and this trail was at least a 1/2 mile long to the tree point… so that meant we were SO CLOSE to our goal! Willi promised to get up and hike it with some trail clearing tools and then next time I come up, we’d ride the whole way… YES! That will be an adventure for another write up….maybe I’ll take some video next time. We’ll send it in to those ‘Extreme Trail Race’ groups and see what they think… My horses may or may not go through a tarp tunnel, but will their horse cling to the side of a mountain in hoofboots like mountain goat? The invite is there…anyone that wants to can come join us for the next EMT ride in the Trinity Mountains of Northern California 🙂 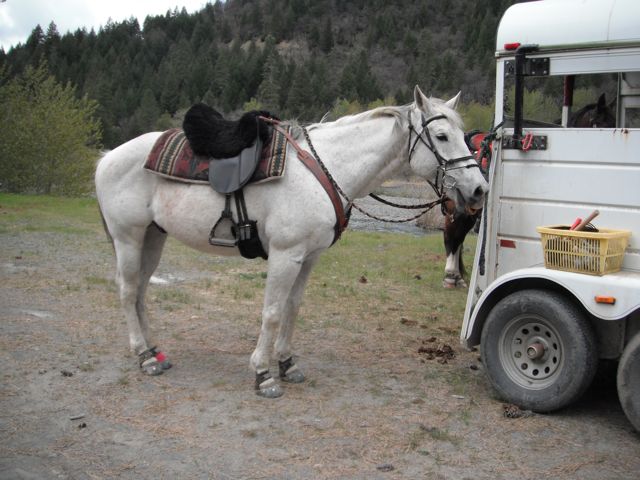 After the ride, Clyde says “That was fun…all in a good day’s work… no problem!”