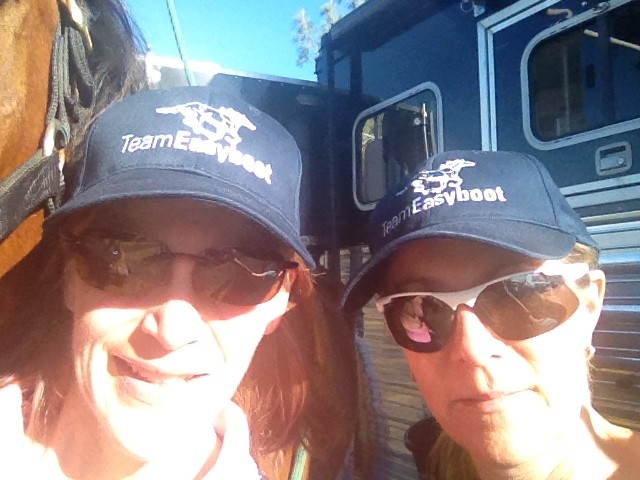 My riding partner Jenni Smith and I completed our second CEI** (75mi/120km) at the Shine and Shine Only ride on April 20. This AERC ride, which I think is in its 25th year, is managed by Becky Hart. The FEI component is relatively new. It was a great day overall. We finished 1st and 2nd, and 45 minutes ahead of the 3rd place horse. We were the only two horses in the CEI ** in EasyCare hoof boots. I was pleased that my two mares finished so well, and I was ecstatic that I had no wardrobe malfunctions (my code name for losing an Easyboot Glue-On during a race). At the 20 Mule Team ride in February, I learned a frustrating yet valuable lesson about makings sure that the Adhere glue mixes out of the gun in equal quantities. After losing nine of the 12 boots I had glued on and analyzing the failure ad nauseam,  Kevin Myers told me that if the glue dispenses with a bluish tint, then it’s not mixing evenly. I remember seeing the “blue” but didn’t think much about it at the time, assuming it was just cold. I didn’t repeat this mistake, and all the boots I glued on two days before the SASO ride stayed on. 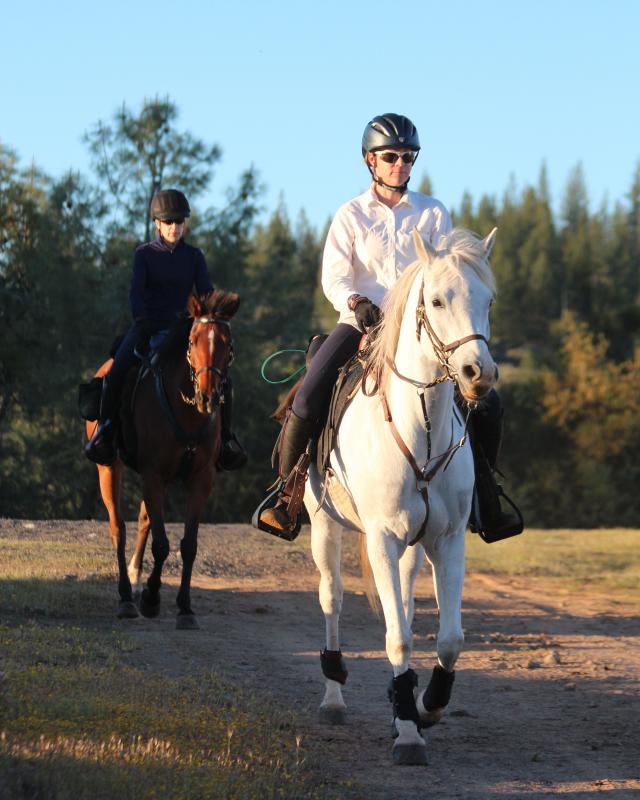 In our quest to fulfill the necessary criteria so that we can nominate for an FEI national or world championship, Jenni and I have now completed the requisite one CEI* (50 mi/80km) and two CEI** (75mi / 120km). Regrettably, we are now stalled out until another CEI*** (100mi/160km) is scheduled somewhere on the West Coast—or at least west of the Rocky Mountains—so that we can get our Certificate of Capability at that distance. While CEI*** races are plentiful on the East Coast, they are a rarity on the West Coast. Only one was scheduled in 2013, and that was at 20 Mule Team. I persistently inquired as to why no other CEI*** events were being offered in 2013 when there are so many riders working their way up through the qualification process. I heard several dubious reasons (ride managers didn’t want to deal with it/too expensive/poor attitudes of the FEI officials and riders). Rob Lydon, DVM offered the most plausible explanation—that in order to hold a CEI*** a four-star-rated treatment vet must be present, and that vet must be licensed in the state in which the event is being held. According to Rob, the lack of a veterinarian with this qualification is the reason why  there are no CEI*** events on the calendar for West Coast riders. Regardless of the reason, there are a group of talented horses and riders on the West Coast who aspire to ride at the FEI level but cannot because fulfilling the qualification process is so difficult. I won’t say “impossible” because I could haul my horse to the East Coast for a CEI*** but that is not a realistic or cost-effective solution for me. As it stands, the best we can hope for is that the CEI*** will again be offered at 20 Mule Team in 2014. If it is offered and if Jenni and I are successful in earning our COC, then it will have taken us three ride seasons to complete the qualification process.

In the meantime, we will continue to support the ride managers who offer FEI sanctioned events by entering their rides. It’s expensive, but worth it, if our entries help to maintain the momentum of interest in riding FEI that is building on the West Coast.

Footnote: I am diligent about checking my Easyboot Gloves before and after every training ride. This time I found a rusty nail embedded in the bottom of a boot. How ironic that it was a shoeing nail.