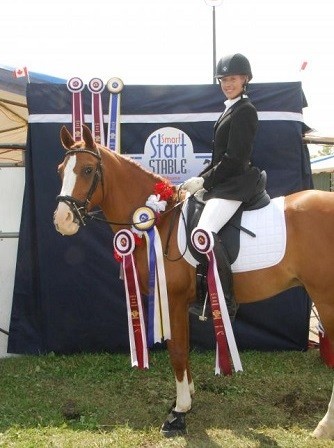 This summer we had some unfortunate shoeing problems. One horse affected was Sofine Strait Man +/, a wonderful chestnut Arabian gelding owned by Ella Frucherman and ridden by me, Kari Schmitt.

We had to pull his shoes for some time during show season, up to which point he and I were undefeated in 1st and 2nd level dressage…and this was his first year competing in both of those levels! He had about six weeks before Canadian Nationals, so to help him be as comfortable as possible, I purchased the Easyboot Rx because of the cushioning, traction and durability it offered. He loved them! 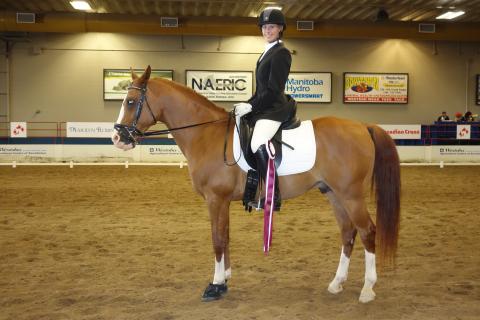 Knowing that the footing in Canada was indoors and very soft, we opted to keep him barefoot as it was the best thing for his hoof health at that time. The Rx boots came with us and were on for the trailering and walking anywhere besides the arenas. As he was completely sound the entire time, he showed as well as he could barefoot and ended up the Canadian National Reserve Champion in 2nd Level and earned a Top Ten in 1st Level! I put the boots on for his victory pass as they helped us get to that point!

Just to note, his shoes were able to go back on in September in time for the US Arabian Sport Horse Nationals in Virginia. He scored a 72.9% in 1st Level and was named the National Champion along with earning a Top Ten in 2nd Level! Thank you to the Easyboot for helping us through some tough times!