I wrote an article on how to maintain your horse’s trim between your trimmer’s visits for this week’s On the Hoof entry. But I saw a horse yesterday that brought up an issue I wanted to address instead.

The horse in question was a teenage Quarter Horse gelding sprung upon me at the last minute by a client who runs a local rescue. The horse’s name is Traveller, and he isn’t a rescue; he belongs to my client’s neighbor, who uses him as roping horse. She begged me to follow her over and have a look at his feet, explaining that he had a “crooked foot”, and had been lame for some time.
(I have to pause here and apologize that I did not get photos of Traveller’s feet…it was the end of the day, and I had apparently left my camera on for several hours, so the battery was dead.)
I was prepared to find some sort of wry foot, or a deformity from an old injury, or something along those lines. What I found instead was a horse with an angular limb deformity. He clearly wanted to toe in from the fetlock down. His caretakers had worked mightily to straighten it (for years, it would appear) by horrifically imbalancing his poor, innocent hoof.
Whether toed-in, (pigeon toed) or toed-out, trying to straighten the limb by shortening one side of the foot (or letting one side of the foot become long) is never a good idea, and can lead to degenerative joint disease higher in the limb. (I was not surprised to see that Traveller had very obvious high ringbone laterally on his poor manipulated foot.)

Appropriate trimming for an angular limb deformity is an issue that hits close to home for me. My 8 year old, homebred Paint gelding, Mixer, is pretty radically turned out from the knee down on his left front. 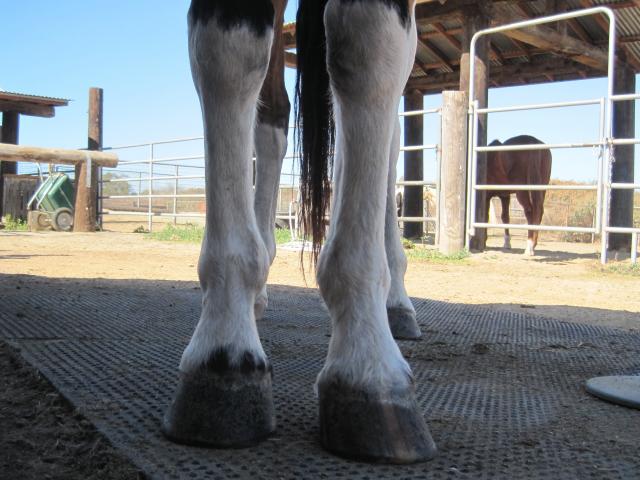 Mixer’s left front takes a pretty radical turn! He is overdue for a trim here..about 5 weeks. 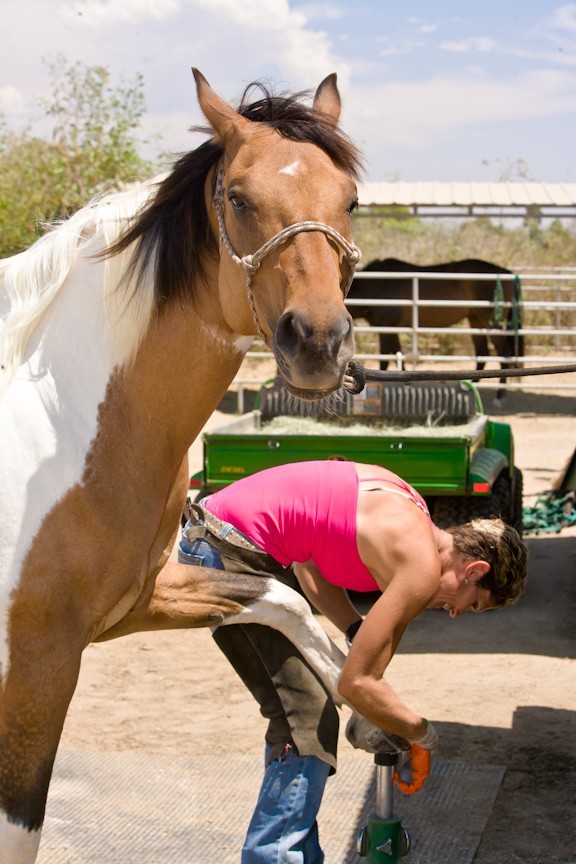 In spite of this defect, Mixer is lighter on his feet than any other horse I have ever met. In fact, his nickname is “Lightfoot”. He is truly one of those horses that just appears to float above the ground. If you focus on the way that left front loads, it’ll about give you a heart attack. But instead of fighting to create “normal” hoof flight in that leg, I’ve simply worked to balance the hoof appropriately for the skewed bony column.

To do so, I’ve simply used the sole plane as my guide in balancing that foot. 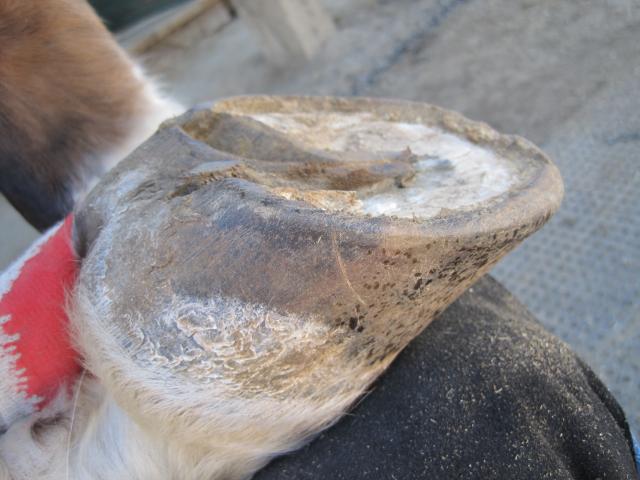 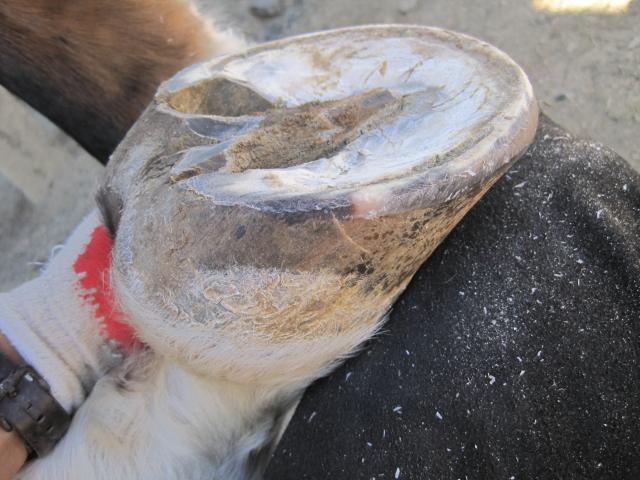 Before and after trim. 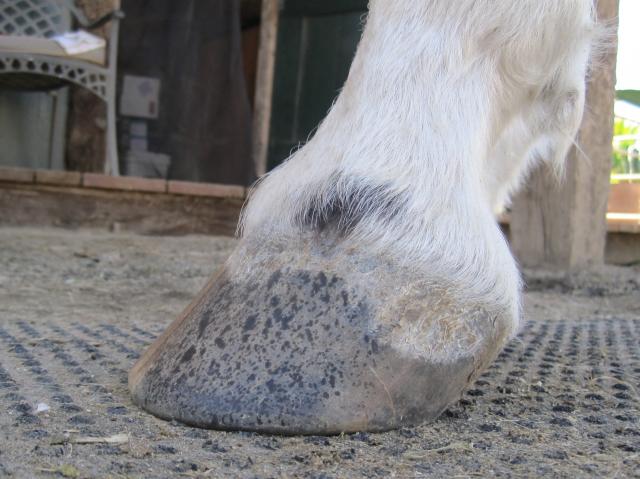 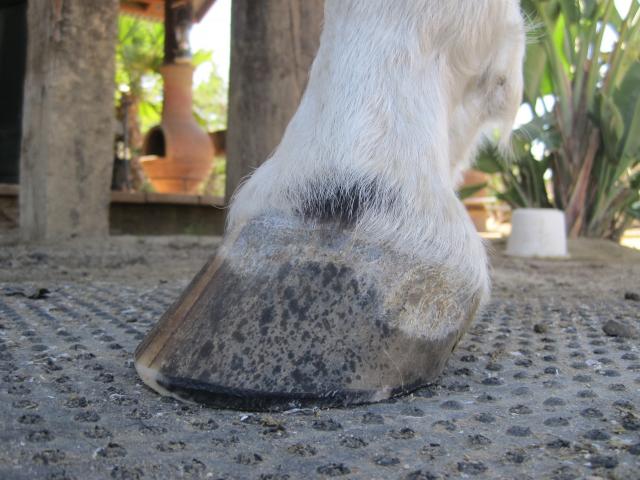 Lateral view, before and after trim. (The “after” shot is angled a bit, and not exactly lateral.)

As a result of the odd loading pattern (he literally lands first on the lateral quarter and heel, and rolls over the medial toe and quarter), his heel is somewhat contracted. But the really interesting thing here is how symmetrical the wear pattern is. I think perhaps one of the most important things to look for when trying to keep a foot and leg like this healthy is just that…even, symmetrical wear. 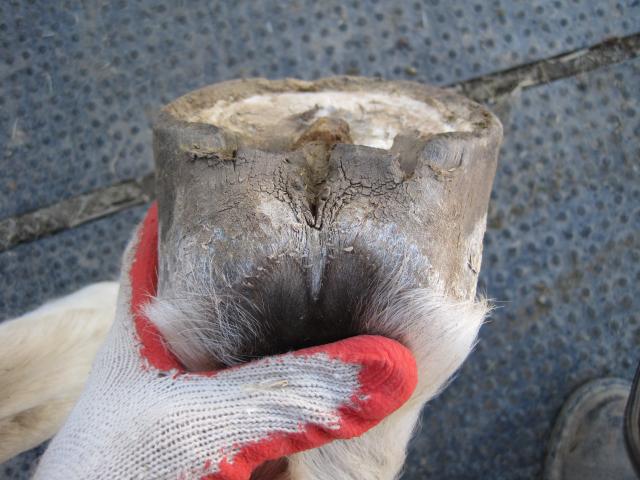 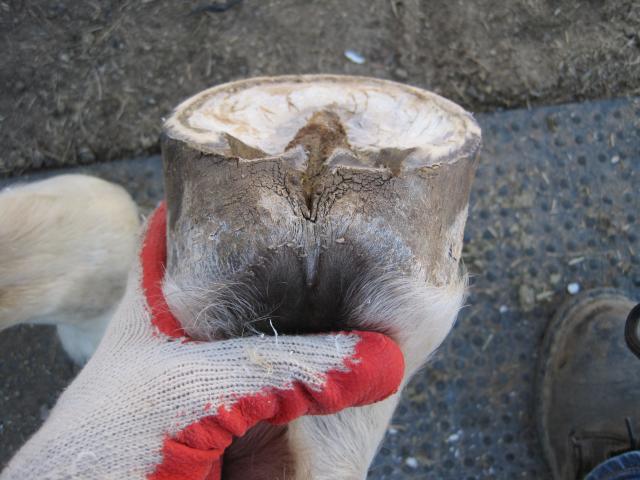 …and after trimming using sole plane as my guide.
With some angular limb deformities, corrective trimming when the foal is just months old can help straighten the limb. Attempting to do so to an older horse will only cause problems.
The take home message? The best approach to keeping a horse like this sound is simply to strive to keep the base of support directly under the boney column, and work to achieve an even wear pattern.