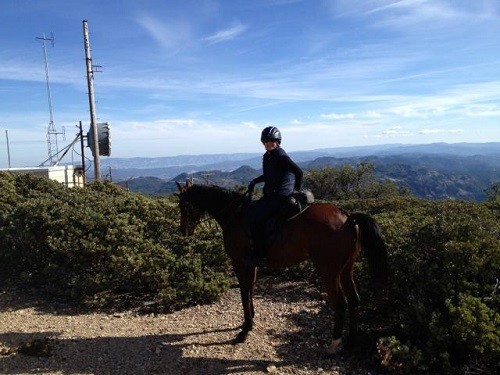 I was sitting around with my riding pals Cris Jones and Jenni Smith after a fabulous 20-mile ride at Pt. Reyes National Seashore, talking about my new friend and rider, Naomi Brooke, who had ridden with us that day. It had been her first long ride with us:

“Do you think she’ll come back?” Cris asked.
“I certainly hope so,” I replied.
“I don’t know,” Jenni interjected. “She was really suffering.”
“I didn’t hear her complain one time,” I replied.
“She was suffering in silence,” Jenni said.
“Oh,” I said. “Well, I hope she comes back.”
“Who was that chick we took up Mount St. Helena? ” Jenni asked. “She didn’t come back, did she?”
“No, not after that ride,” I replied.
“The problem is,” Cris said, “that people think, ‘Trail riding … how hard can it be?’ And it’s a lot harder than they realize.”

Cris Jones at the top of Mount St. Helena.

So true, we all agreed, and we launched into a lively conversation comparing various disciplines to trail riding. Riding, regardless of the type, is physically demanding. Trail riding is often viewed as a relaxing break from the demands of the training and competition arena, when in fact it can more demanding. Riding uses the whole body in ways that no other sport does. When people ask me how I get into shape to ride long distances, I reply, “by riding long distances.” The only way to really get into riding shape is to log hours in the saddle.  And then there are the discomforts that long-distance riding generates if you aren’t acclimated to it. Most discomforts can be tolerated for a short period of time. In fact, they might go unnoticed if a rider is just doing a few laps around an arena and popping over a few fences. However, after a few hours out on the trail, tingling toes go numb, the balls of the feet start to scream, the calves cramp, the knees ache, the back goes into spasms and the shoulders get stiff. Not much can be done about this except to pop a few “vitamin I” tablets, dismount to walk off the pain and then just ride it out.

With five horses to keep in shape, I am always on the lookout for good riders to recruit. They are hard to find. And when I do find a good one, I risk scaring them off, not because my horses are unruly, untrained or difficult to ride in any way, but because trail riding is a lot harder than they think it will be.

It’s just about impossible to find riders like Cris Jones, the petite Aussie with bravado will throw her leg over any horse and ride for days. She doesn’t own a horse and never will. She doesn’t need one, as she has a large circle of friends with horses who are lined up to have Cris ride their horses. Cris has logged thousands of miles on other people’s horses. I’ve often called Cris mid-week to inquire if she is available for a weekend ride only to be told, “Oh, sorry Jenn, I’m riding with so-and-so; she asked me several days ago.” If I want to recruit Cris for a ride, I need to book her well in advance. Cris is a free agent.

Pascale Soumoy is another fabulous catch rider. She began riding years ago with Bob Spoor and then Jazon Wonders, and is now firmly set in Christina Bowie’s camp. Like me, Christina always has three or four horses going at any one time and so it’s just about impossible to get Pascale these days.

I won the lottery when I befriended  Jenni Smith about three years ago. She came to me from the Bay Laurel group of riders. Like Jazon Wonders, Peter Rich of Bay Laurel owned a string of good horses and had successfully recruited a group of riders to train and compete on these horses. When Jazon and Peter “retired”, their riders became available. Jenni had aspirations to ride at the FEI level and also continue to ride Tevis. I happened to have the horses she could do that with. We’ve been riding together ever since, and she’s completed three Tevis rides (so far) on my horses. Like Cris, Jenni has logged thousands of miles on other people’s horses. 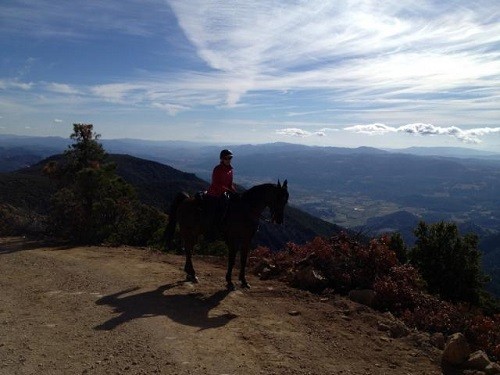 I frequently have horse enthusiasts seek me out. They introduce themselves and talk about how they used to ride, had horses, rode dressage, western, cross-country, blah, blah, blah. I sometimes invite them to go riding, but they rarely take me up on the offer.

K.E. did take me up on my offer (I don’t want to use her full name because I’m about to poke fun at her). She came out for a few short vineyard rides followed by a trek out to the coast for a three-hour ride. So far so good. She had good balance, a nice seat and some stamina. K.E. expressed interest in endurance riding and so I invited her on a training ride with Jenni and I. The ride consisted of a 5-mile trot and canter up to the top of Mount St. Helena, and then an easy jog down. It appeared she did fine, but when I ran into her at the coffee shop a few weeks later she confessed to not being able to walk for days. She invited me to lunch but never asked to ride with me again.

I was recently introduced to Rebecca Stockton by Jeff Herten (remember my Rimrock Trail blog?). Rebecca, now 19, has been riding since she was a young kid. She is attending Sonoma State University and just wants to get her horse fix when she has time. She comes to the ranch every Thursday afternoon to ride Merlin (my Friesian) or for short training rides on the Arabians. Rebecca is smart, and she has been riding long enough to not let me talk her into riding more or longer than she can/wants to. Even though she is a skilled rider and accomplished hunter-jumper competitor, she admits to being out of trail-trail riding shape. I’m optimistic that, as she builds her stamina, Rebecca will be a terrific training ride partner.

Naomi Brooke posted a flyer at Alyssa Wetjen’s barn. Alyssa was the topic of my first blog, Meet Mustang Lady. Naomi was an experienced rider, new in town and looking for riding opportunities. I called her immediately. She said she used to exercise polo ponies. That was music to my ears!  A few days later she came to my barn to ride. I started her on Merlin and Bearcat. So far so good. After a few trips around the vineyards, I invited her to a weekend training ride at the coast with Cris and Jenni. She accepted. 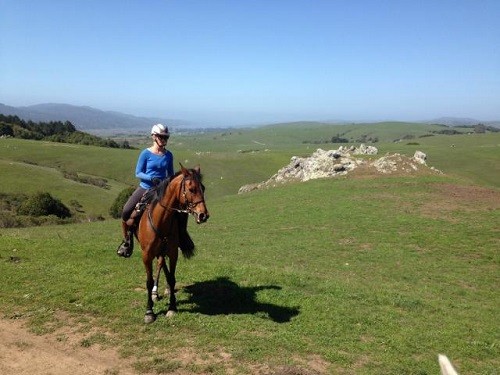 Naomi, hangin’ in there on Stella.

I mounted Naomi on my best, most comfortable horse, Stella. Even on Stella, after 10 miles of effortless trotting, Naomi’s knees were aching and her calves were cramping. After almost 20 miles, she was, as Jenni observed, suffering in silence. Still, Naomi didn’t complain. Naomi said she was game to go another day. However, mounted on a different horse and in a different saddle, she reached her pain threshold at about 10 miles. I began to think that perhaps Cris and Jenni were right. Naomi might not return.

But she did! Two days later, in fact. Not only did she return to ride again, but she did so in the RAIN. She also quickly learned how to put hoof boots on Merlin after just watching me a few times. A rider who can boot her own mount is a bonus. I may have discovered the next Jenni Smith, Pascale Soumoy or Cris Jones.

There is a point to this story, which is what got me thinking about writing it in the first place. AERC membership is declining because the old, diehard riders aren’t being replaced with new ones. What can be done about it? One approach is to reach out to horse owners and get them to try the sport. We are seeing many more rides offering “fun ride” distances for these people. Another approach is to find good riders who want to ride but don’t want to take on the responsibility of horse ownership. The Peter Rich / Jazon Wonders models of how this works are excellent examples. Find a rider, give him or her a good horse and hope they have the time of their lives. Then hope they are tough, really tough, because trail riding is a lot more than a walk in the park.