So as promised in my last post, I put the new Goober Glue to the test over the weekend’s training ride back to Avimor. Can I just interject once and say that I just love my mare? I know all of my friends and riding buddies are sick of hearing this, but I am going to use this opportunity to sing it loudly to people who don’t actually know me and don’t have to deal with riding 50 miles with me the whole time proclaiming my love for this snooty little red-headed mare!! I have never had a horse who I would rather keep riding than go back to the trailer after a long, tough day. Thank you SO MUCH Kim Johnson of Belesemo Arabians for affording me this amazing opportunity!! I just can’t get enough of this view!!! 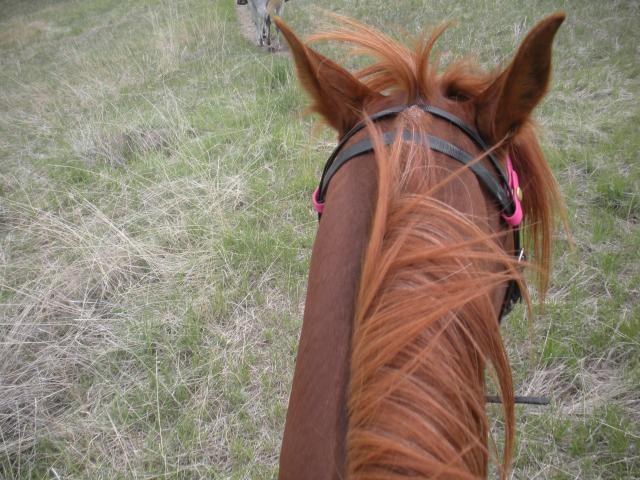 Ok, off my soapbox and back to previously scheduled programming!!

So I promised I would report back about my Easyboot Glue-Ons, applied with the “new” Goober Glue. For a refresher, I had glued on my boots the night before the wreck. I had planned on using the new stuff, but as it arrived UPS, like, the second I left to go to the barn, I think it was frozen. I tried my little heart out trying to get the damn glue out of the tube to no avail (I’ll get back to this further on). So, being the innovative and carefree, fly-by-the-seat-of-my-pants kinda gal, (ok, so everyone that knows me right now has currently spat out their Diet Coke all over the keyboard laughing- serves you right friends!), decided to glue my boots on with the regular Goober Glue, which never failed me in over 400 miles until the first ride this spring. So we all know how the night turned out, but what I don’t think I mentioned was that she pulled her right front boot (same boot that was lost at the ride) during the mess, which I really can’t judge due to the sheer nature of the offense. However, it got me thinking.

Why did the boots work for her last year, even after 205 miles in four days? What was I doing wrong? One night laying in bed it hit me- I had put her in bigger sized Gloves this spring due to her increased foot size, and ordered the Glue-Ons in the larger size as well. That said, I was using Powerstraps with the Gloves, so I thought to myself- Self, why don’t you see if the smaller size fits better on that right front, which is ever-so-slightly smaller and almost imperceptibly steeper than the other foot? So the Sunday after her wreck, I headed out with my “glue duds” and slapped a set of front boots on with the new Goober Glue, which actually comes out quite easily if it is appropriately thawed out!

To go over the glue process, I’ll outline the way I do it. This does not mean you should do it this way, it’s just that I have glued on boots probably twenty times this last year so I have a sense of what it really important in certain situations. Since this was a total trial, I didn’t rough up the hoof wall as I had just glued on boots four days prior. I also didn’t clean the Goober Glue off the hoof wall very well that was still stuck on. I did peel out the left over GG from my used shell but didn’t fuss over it. I squeezed out some GG into little disposable bowls I had in the LQ and used my putty knife to spread it inside the boot. I glued on the smaller sized boot on her right front foot, and the larger size on her left foot. I then let her stand for about an hour at the trailer while I dealt with this – 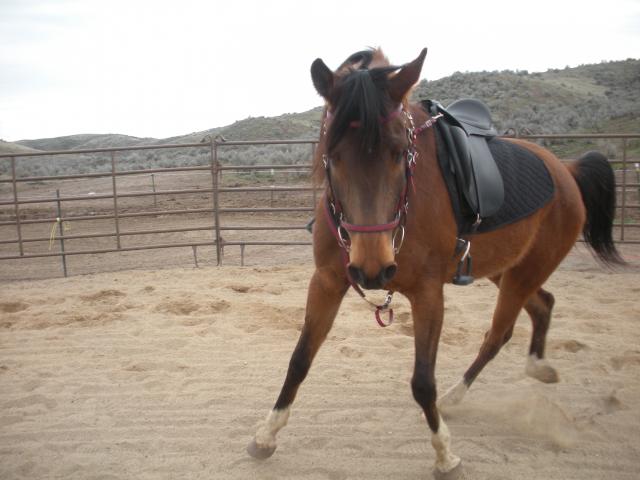 I will digress one more time and say that raising a youngster is exhausting. I spent more time that day picking up each and every grooming tool I left on the fender of the trailer that Topper thought would be fun to pick up, chew on, slobber up and then drop and spook as it hit the ground. I am also constantly alarmed at the fact that he seems to continue to grow. Good Lord horse please stop!! I have taken him off all grain and Platinum Performance in hopes that he stops growing lol!! Look at that tangled mess of legs! And I RIDE this gawky thing!!

Like I said, I turned her out after the hour and halfway expected to see bare feet when I went out to get her the next day. Nope! Still on! Thursday night I lunged her for about 20 minutes in the round pen and was impressed at how good she looked. Saturday morning my friend and I loaded up and headed again over to Avimor. It was looking to be a beautiful day!! 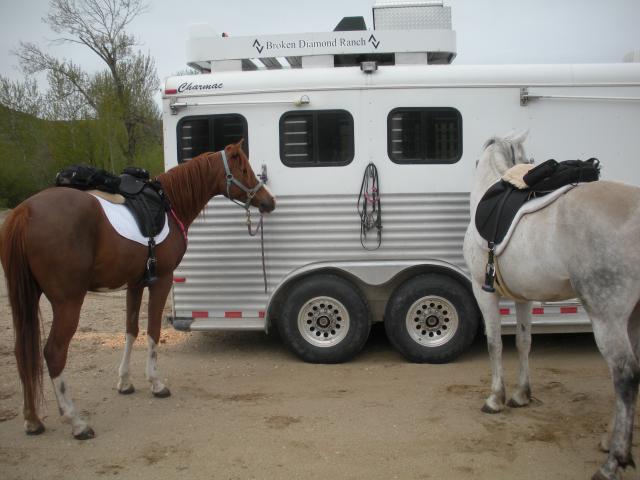 Replika and Granite ready to go!

So off we started on the most amazing ride. You know how it feels when everything just comes together? Our horses were fresh and happy to be out, Sally and I were in exceptionally good moods and we found the most amazing loop that will be repeated again this weekend!!

You can see the trail going up, up, up! Destination- the triangle shaped rock in the top of the far, right corner. 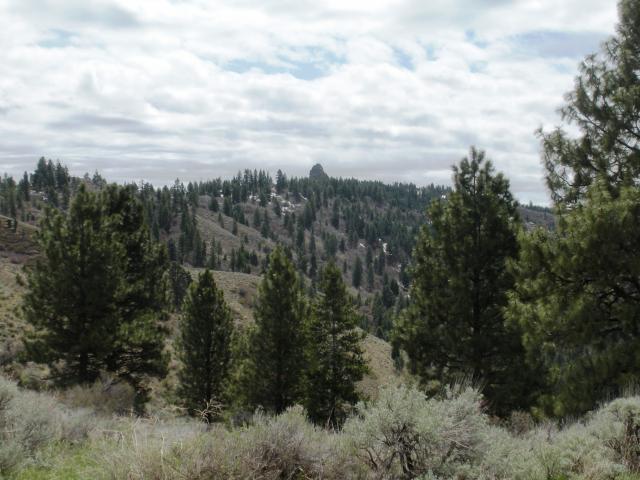 Stack Rock! Almost there! We climbed about 3300 feet in a little over eight miles. 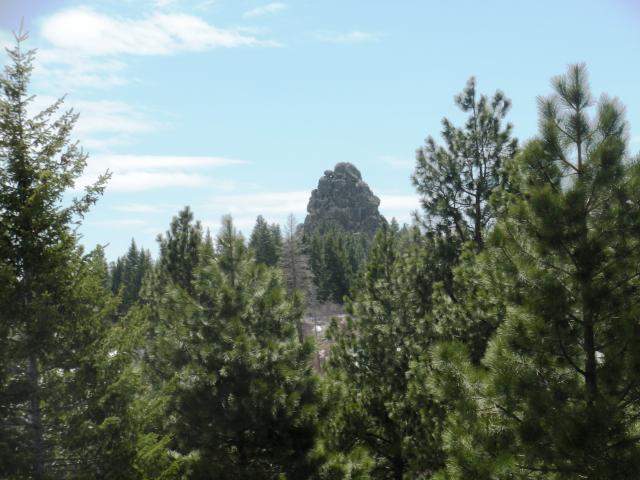 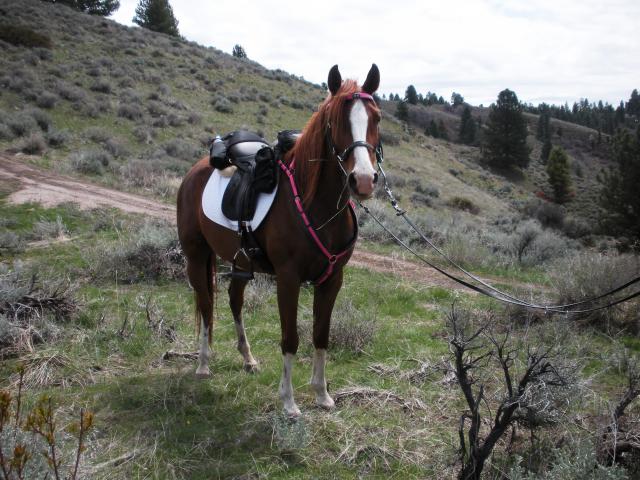 Replika looking all fresh after a massive hill climb. Meanwhile I was hunched over gasping for breath as we got off to walk up the really steep stuff. Sigh, the things we do for our ponies!!

Ok, so I know your waiting for it- where’s the picture of Stack Rock up close?? Well, unfortunately due to the icky white stuff, we didn’t quite make it about the last 1/10th a mile to the actual rock. We are pretty confident we can get all the way this weekend after several warm days. 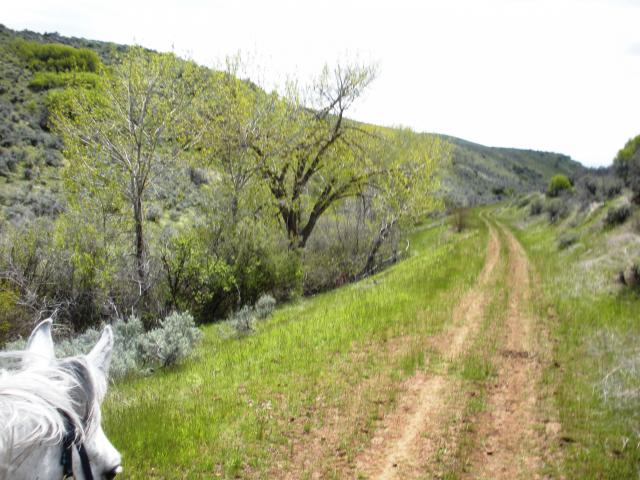 We found an awesome more gradual two-track road going down, which we decided to use next time as our “up” trail. This is part of the trail on the way back down, pretty close to the bottom.

What a great ride! I have to give a quick shout-out to my pal Sally and her amazing horse Granite. While this wasn’t a particularly rocky ride, there were plenty of sections of pretty sharp rock in the trail. Granite, aptly named, trots and canters over the rock, completely bare, like it’s not even there. He has the most beautiful feet I have ever seen, and is what all of us “barefooters” strive for. Good job Sally!!

I pulled Replika’s boots back at the trailer and by the time we got home, you would have never known she had boots on her back feet for 10 days, and her front feet for seven. I am going to use the new Goober Glue for the next ride, which is over Memorial Day weekend. 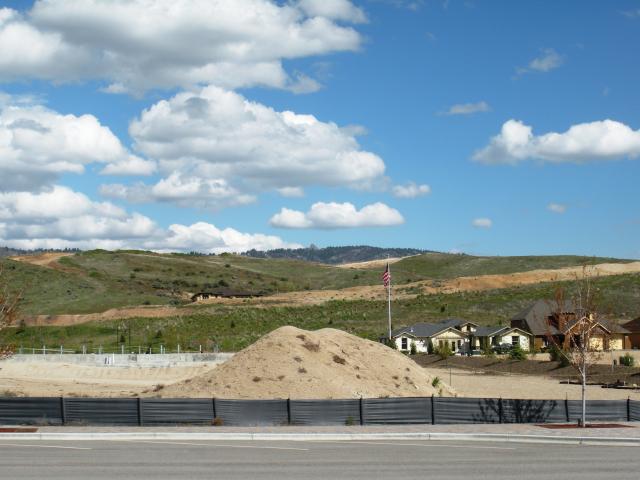 Here is a view from back at the trailer. Can you spot Stack Rock?

I want to take a quick second to say that I am really sorry to hear about the hoof boot failures we have heard about lately. With that, however, is a ton of success. The consistency I can spot is that the success seems to lie with experienced boot users, and the failures seem to be with the newer users. All I can is hang in there! It does get better, but it is not always easy!! Evaluate fit, protocol, and use plenty of glue. If you are using Adhere, take care to keep it off the sole of the boot, and if using GG, make sure to allow for enough time for the glue to set before letting the horse really move around. Hoof prep is important as well, but equally important is to keep the break-over of the hoof far enough back to prevent forging, take care of medial-lateral imbalances, get rid of all flares as they very negatively affect the fit of the boot (both Easyboot Gloves and Easyboot Glue-Ons) and don’t be afraid to practice at home.

I hope things get easier for everyone, I really do. Keep up the booting and keep up the riding!!!