Late last night we pulled in from six days of horse camping in the High Sierra – tired, filthy, and with a laundry bag the size of a small car – but boy did we have fun.

This was Jackit’s first camping trip and he took everything in his stride, travelling over 35 miles in five days – not bad for a little guy who only started in real work six weeks ago and effectively doubled his lifetime mileage.

The first couple of days, we rode barefoot. The trails close to camp were in a soft meadow and boots were totally unnecessary: 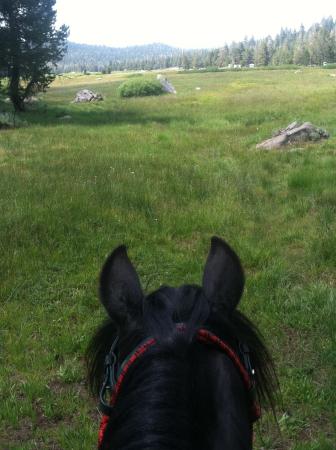 Small Thing gawps at the boulders in the meadow

Gradually, however, as we got further afield, the footing got rockier and by the end of Day Two I decided it was time to boot him to keep him comfy. 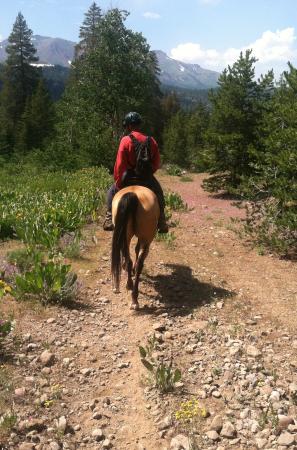 This development was apparently very well received. On Day Three we went out and did a solo-ride and Jackit did the best he’s ever done – stomping through the rocks with much enthusiasm and trying to trot at every opportunity – regardless of the footing (something that was discouraged – I don’t care how comfy you are, we still don’t trot through rocks). 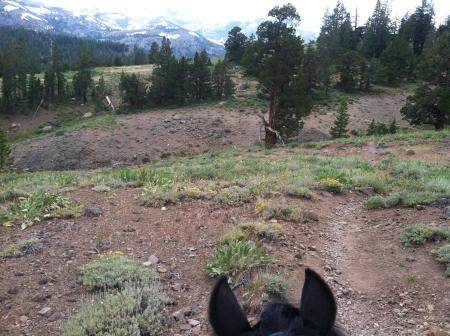 On Day Four, we did our longest ride yet – 10+ miles on the Pacific Crest Trail and surrounding dirt roads. 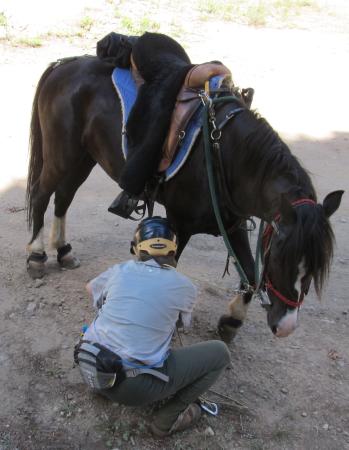 Snugging up his gaiters prior to setting out on the PCT

This ride really stretched him, with both the footing and what he was required to do – clambering up and over granite boulders, not to mention several miles of on and off trotting – all done at 8000’/2400 m. I seemed to be the only one suffering from extreme puffiness – I’m hoping from the elevation, not from trying to keep up with Jackit. 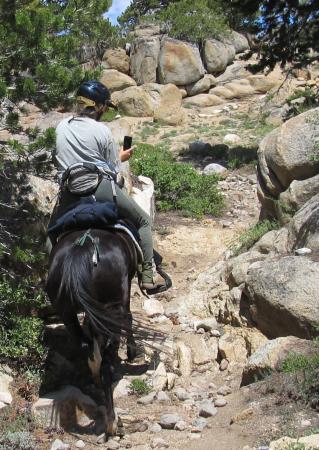 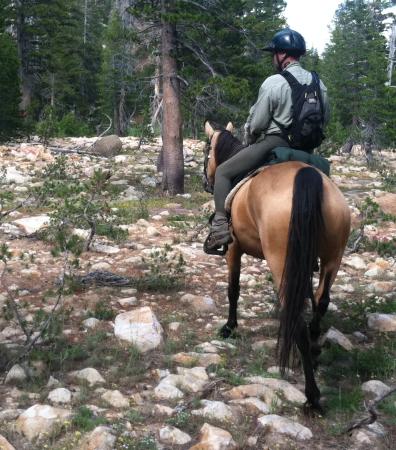 Day Five was the crowning moment of proudness for me. Having enjoyed our solo ride so much, I persuaded Patrick to come with me to explore further along the same trail. The ride started interestingly when a large downed tree blocked our path, necessitating climbing down some rocks and detouring via a creek. Not a problem. The next few downed trees were simple enough – just crash through the woods to get around.

We met some hikers who told us they’d been “as far as the waterfall” and that there were “some steps to negotiate”. Hah. A few mingy steps – we can do that easily.

The first rocky area seemed simple enough – just a quick reccy to figure out where the trail went and if we could make it OK. In our boots on the grippy granite rock, no problem. Then came the first step – about 3′ down a 10° rock. Hmm. Jackit did this without hestitation, while Fergus managed to scrape a front leg a little.

The second step was just 1′ down – no problem.

And then we came to the last one. Uh oh. This was more like 4′ and wasn’t nearly as straightforward. I figured I’d go down and then get out of Jackit’s way, lest he try to jump on top of me (bin there, done that – got some good bruises). Predictably, both horses managed this maneuver very tidily and we continued down the trail, through a willow tunnel, over a couple more creeks, and negotiated a grove of aspen before deciding it was time to turn around – and go back up the steps. 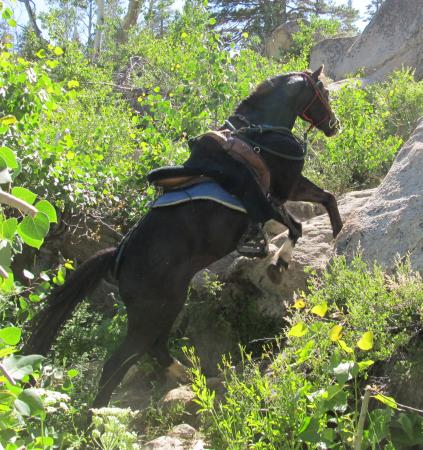 As you can see from the photo, Jackit didn’t have too much problem with the “up” part. In fact, when he came to the last/first step, he cat-jumped it and the look on Patrick’s face was priceless at how gracefully and unconcernedly he did it. We unclipped our reins to make sure nothing would get snagged by mistake and sent the horses up the rocks on their own so they could figure it out in their own time. They were actually more interested in the eating of grass while Patrick and I stood around with wide, admiring eyes after each leaping session.

I have to say I’m not sure I would have asked the pones to do any of this rock climbing if they were barefoot (and definitely not if they’d been in steel shoes – talk about a recipe for disaster), but with the grippiness of the Gloves it was almost a non-event.

Once again, so very proud of my Small Thing and how far he’s come in just a few short weeks. He may be barely 13 hh, but he’s about the most fun you can have on a pone. A most excellent trip and we hope to go back in a few weeks – with luck when there are less mosquitos and biting horse flies.