It’s hard to believe a year has passed since I had the opportunity to ride in the Redwood National Forest. 2010 is flying by and I feel like I’m pedaling fast to keep up. It’s been a good year in many ways and I’ve been fortunate to have a great horse and great friends to share some miles with. Here we are, already into August and ready for another Redwood Ride.

I had two goals for this ride. The first was for Little Bit to haul to the ride by himself and camp like a professional endurance horse without the support of a buddy. A professional would be the kind who eats and drinks and takes care of himself, rather than the kind who stares into the distance and waits for it to get dark before he bothers to eat. Usually, Little Bit falls into the less desirable category. He’s normally too busy meditating to remember to take care of the basics. 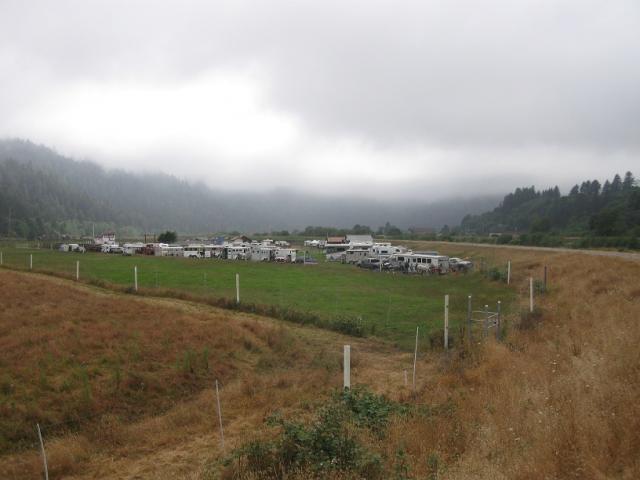 So, Friday afternoon, Little Bit and I, along with my husband, Russell, and dog, Jefe, set out for the Orick Rodeo Grounds. The ride, located along the coast of Northern California, is only a ½ hour drive for us. Our dear friend, Katie Azevedo, had saved us a spot and despite not arriving in camp until almost 4:00, I was able to vet in, do a quick pre-ride, pack a crew bag, and settle in before the ride meeting at 7:00. Little Bit camped like a pro. He ate, he drank, and he didn’t seem terribly concerned that he was by himself. Mission number one: accomplished. 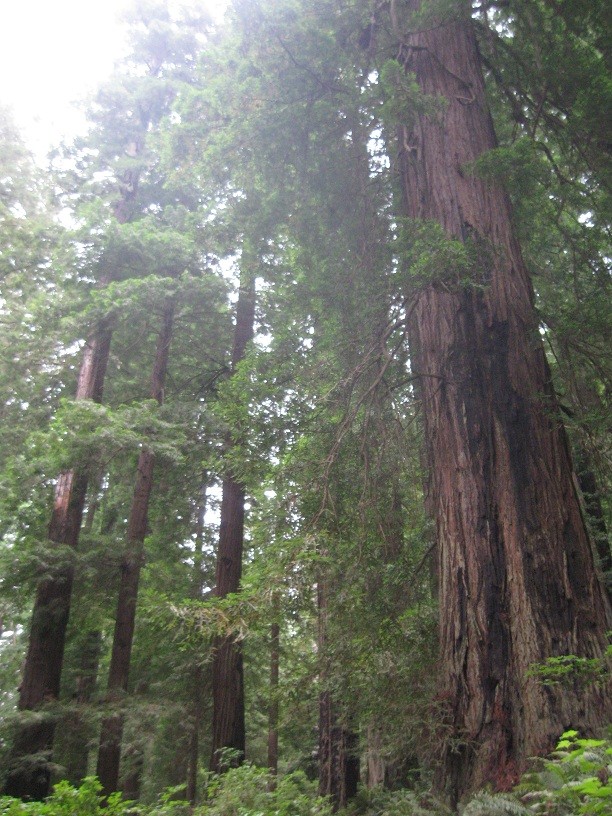 The ride meeting was short and sweet, thanks to ride manager Natalie Herman and head vet, Dr. Jen Powers. The ride is hosted by Redwood Empire Endurance Riders, a small club that puts on four rides each year. For this ride, Natalie volunteered to be manager and she really did a great job. I especially liked that she didn’t make us put ugly numbers on our horses butts (something I’ve always thought makes a horse look like he’s come straight from the auction yard).

My second goal for this ride was for Little Bit to start the ride by himself. Looking back, I should have been more specific when mentioning this to him, as I think he took it quite literally. Perhaps that was why he chose to dump me at mile 8 and attempt to do the ride “by himself”. The start of the ride went better than expected.

Through the night, Little Bit had made friends with his neighbors and thought it’d be best to stick with them all day. I walked him for about 20 minutes in camp to warm him up, and at 6:30 when they said the trail was open, I let the front runners get a head start on the single track trail before setting out. Little Bit power walked across the levy in a reasonably relaxed fashion. Just as we were about to set out up the big hill, a rider went trotting past us at top speed which indicated to Little Bit that this was where he should start trotting, too. This was the 11th time I had done Redwood Ride so I‘m fairly familiar with the trail, and I assured Little Bit that walking up the giant hill at the beginning was an absolute must. Much to my surprise and delight, he complied with my request and behaved himself. Mission number two: accomplished. Sort of.

A couple miles into the ride, Michele Dostal and her Rushcreek mare trotted up behind us and ended up riding with us for most of the first loop. Her mare is very sweet and pretty and Little Bit really seemed to like her. In fact, he liked her so much that when Michele stopped to adjust her saddle, and I tried to go on, Little Bit “spooked” at something, dumped me, and trotted back to his girlfriend. Thankfully, Michele was off her horse and being on a single track trail, Little Bit didn’t really have anywhere to go. Throughout the course of our relationship, Little Bit has dumped me a lot. But he’s never dumped me and left me for another woman! In the past when I’ve made an involuntary dismount, I look up to see his big pink nose hovering over me.

I have a horrible memory and I can never remember where, exactly, events took place during a ride (or perhaps the fall discombobulated me more than I thought), but I know that somewhere during the first loop, we caught up to Katie Azevedo, Berit Meyer, and Morgan Gratz-Weiser. And somehow during the first loop, I found myself riding with Katie and Shrimp instead of Michele. Little Bit happily exchanged his new girlfriend for his long time friend, Shrimp. So much for true love. 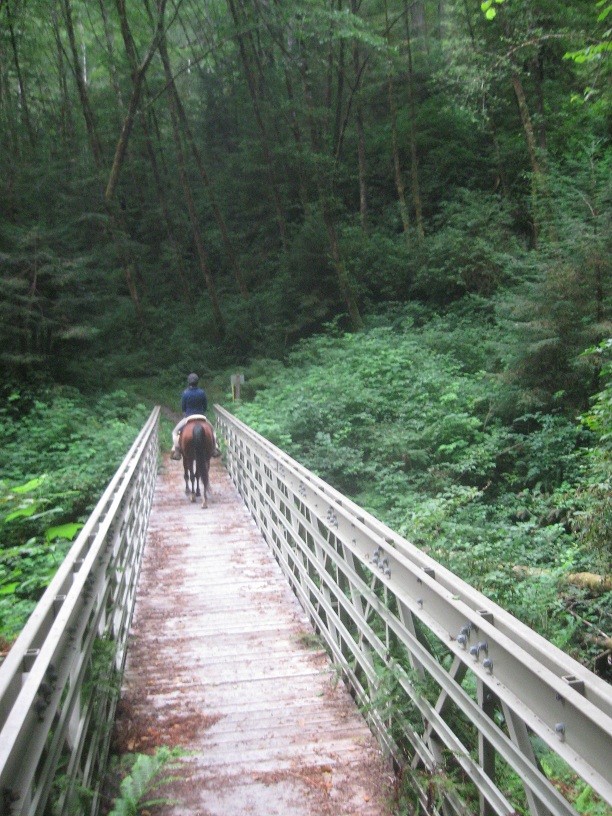 Katie and Shrimp bouncing across one of the many bridges.

It ended up taking us about 3 hours to do the first 17 mile loop. Both boys pulsed down quickly and vetted through with all A’s. We only had a 15 minute hold here but the boys were able to grab a few bites of this and that, and gargle some electrolytes before we hit the trail again. I like riding with Katie for many reasons, including that she’s usually very on time when leaving vet checks. Russell was at the vet check, volunteering and crewing for us. He’s also very good at keeping me on time (“Renee, here’s your bridle. It’s time to put it on”). 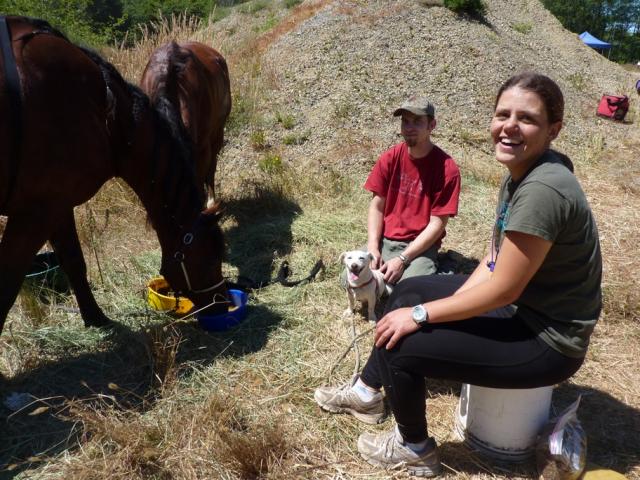 Pulsing in at the second vet check. Photo by Katie Azevedo.

The second 20 mile loop is my favorite part of the ride. Really, the whole ride is beautiful. It’s probably 75% single track trail and 25% mostly dirt roads with just a few miles of gravel thrown in to keep us from being totally spoiled. Much of this loop is like riding through a tunnel of alders and redwoods and big ferns. As Natalie said at the ride meeting, sometimes the trail feels very Jurassic Park. It wouldn’t have been terribly surprising to see a dinosaur or two along the way. 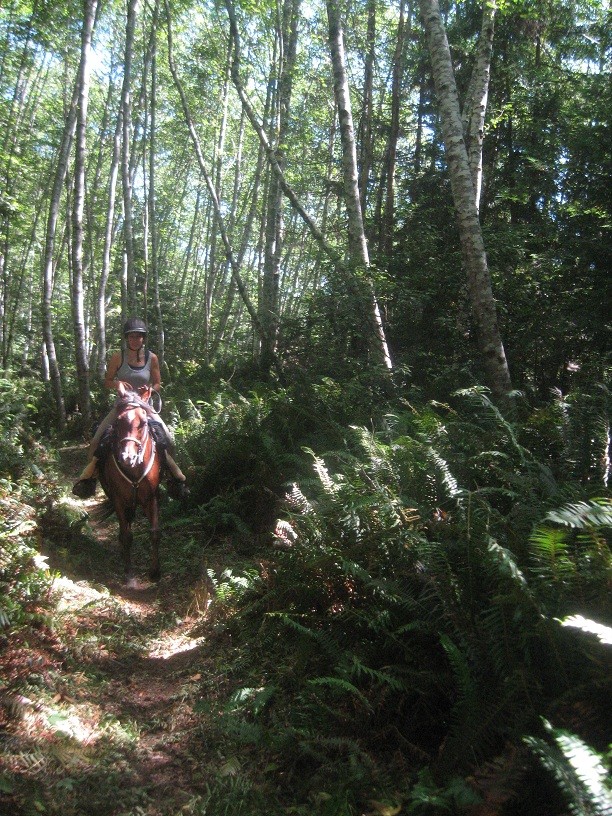 Riding through a tunnel of Alders.

Katie and I rode together the entire rest of the ride. Little Bit is really great at powering up big climbs so he’d usually lead through these parts. But I have trouble pacing his trot as he seems to like to trot faster and faster and faster. So when it was time to pick a pace and stick with it, Shrimp would go in front. He did a beautiful job keeping a nice, working trot that kept their heart rates where we wanted them. The boys actually seemed to have very similar heart rates most of the day. They get along and go down the trail nicely together, which is surprising given the considerable difference in the length of their legs. Having horses that go well together is a definite plus when the people enjoy riding together, too. Katie is one of my favorite people and we seem to be the same amount of paranoid and conservative when it comes to riding. Who could ask for more? 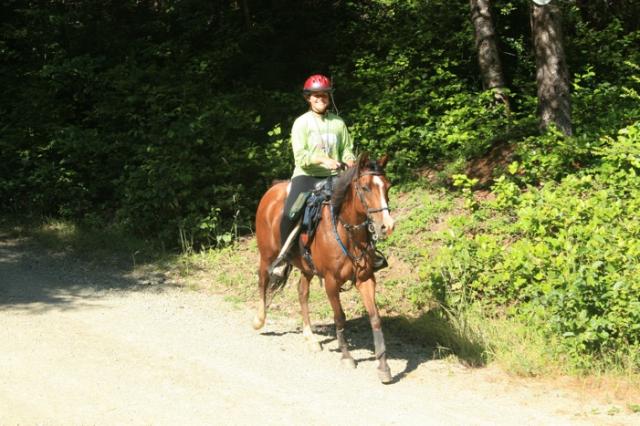 Leaving for the second loop. Photo by Barry Thorpe.

On the second loop, Little Bit started drinking properly. He had taken a few courtesy sips on the first loop but didn’t start tanking up until the second loop. We played leap-frog with Berit and Morgan some more and had fun zipping along through the trees. Little Bit and Shrimp took turns leading. They were both eating and drinking along the trail, taking good care of themselves. Little Bit got lots of practice in patience as we crossed the big bridges that require one horse to cross at a time. He’d have to wait at one end while Shrimp went across. It was a little startling to watch the bridge bounce as the horse ahead of us crossed it. 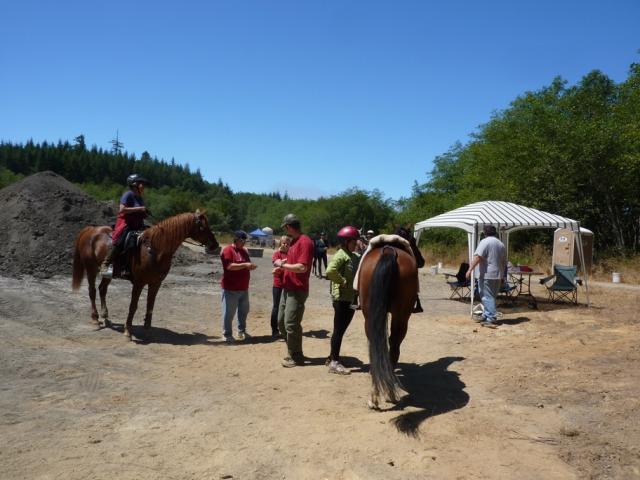 Pulsing in at the second vet check. Photo by Katie Azevedo.

We made it into the second vet check (~37 miles) around 12:40. This time we had an hour hold. The boys took full advantage of our hold and ate nearly the entire hour. Russell and Jefe were there again to crew. Both boys got all A’s. It was finally warm enough to shed my long sleeved shirt and even put a little water on the horses’ necks. I had started out in the morning with two shirts and a fleece vest. By the first vet check, I ditched the vest and finally for the last loop I could wear just  short sleeved shirt. The weather for our coastal rides is an added bonus for riders from inland areas. The very hottest day in Orick during the summer is about 65*. Sure, it was a little chilly in the morning, but after wilting in 90 degrees at Bandit Springs last month, I wasn’t about to complain about being a little too cold. 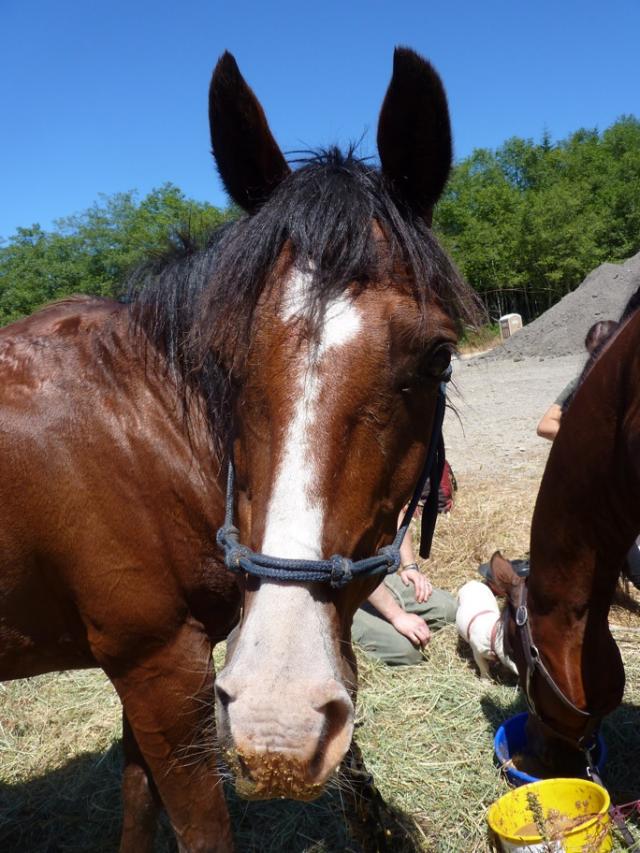 At the end of our hour hold, we electrolyted again before setting off for the last 13 miles. Little Bit still felt great at this point. He was happy and forward and still eating and drinking. In fact, my steed felt so fresh that midway through the loop, he spooked again, nearly dumping me. Katie seemed rather shocked that I managed to cling on that time. There’s one really big, switch-backy climb at the end. The switch backs are tight and every time I climb them, I think how much easier it would be to go straight up (I‘m pretty sure this would be frowned upon). This kind of trail is where Little Bit’s short, compact little bod comes in handy. He powered right up the hill. At this point, I started thinking how well this ride had gone and how great my horse had done all day (aside from that little incident in the morning).

I am so lucky to have a strong, solid horse who loves the trail as much as I do. Living in the redwoods sometimes makes us take their beauty for granted. I always get a little teary towards the end of a ride. It’s such an amazing accomplishment to finish a ride with a happy horse. 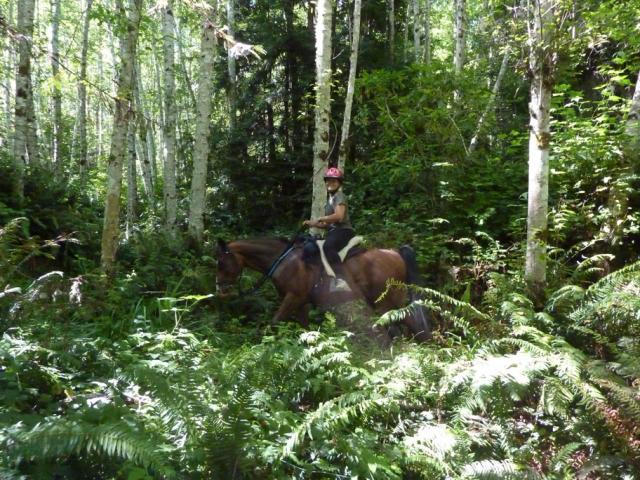 Katie and I made our way back down the big hill, out of the woods, onto the levy and across the finish line at 4:15 with happy, hungry ponies. The day couldn’t have gone any better. We mostly accomplished the goals we’d set for the weekend. Little Bit camped well and took care of himself before the ride, and he surprised me by how well he held  himself together when he had to start by himself. Sometimes I spend so much time fretting and worrying about the worst case scenario that I’m afraid to give things an opportunity to go well. My horse surprised me this weekend, and I feel like the two of us are starting to become more of a team. Sure, he dumped me in the dirt and left me for mountain lion bait, but even the best of friends fight once in a while, right?