Home Success Stories I Get It
Share
Facebook
Twitter
Pinterest
Linkedin
Email
For the first time in my endurance career, I finally have what I’ve been looking for all along, in the form of a little red mare. Funny enough, I didn’t buy this horse, I didn’t spend months and months searching, I didn’t comb the classifieds, didn’t travel far and wide, and certainly didn’t want a mare. She was merely placed in my lap, and I was smart enough to say “thank you.” I didn’t expect the partnership, the team-work, the bond. I didn’t expect to love her as my own, and didn’t think it would be she that I dream of riding when the lights go out. Nonetheless, all of the above happened, and on her, last weekend, I completed my first real long-distance ride. 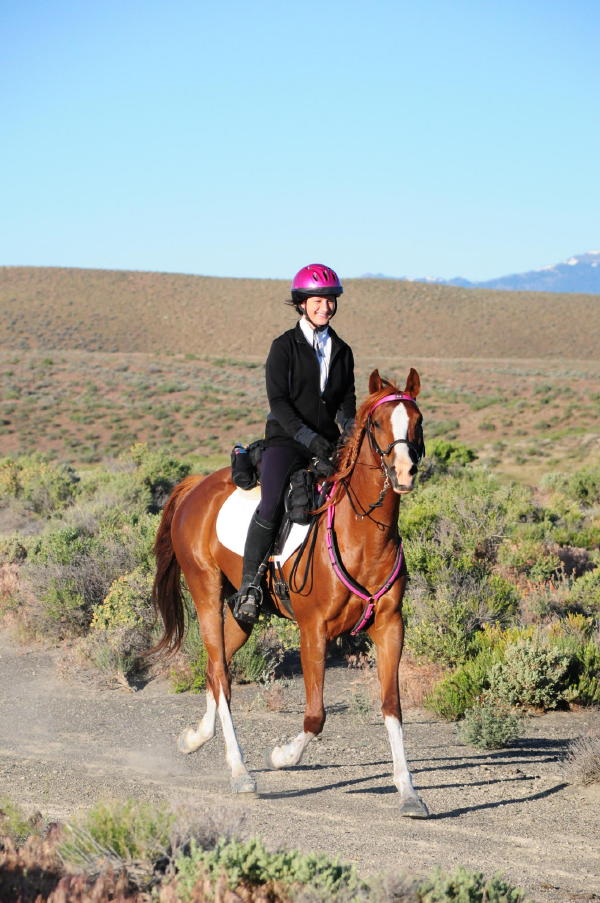 In last week’s post, I explained that we were to be heading the the Owyhee Fandango Three-Day Endurance ride, where I had planned to ride the 80 mile ride, while my husband would be vetting the weekend away. I took off, as planned, Thursday morning. As it had rained all morning, I wasn’t in a huge rush to get to camp, and took the time to get some work done and do some last minute packing. Unfortunately in my leisure, I missed The Bootmeister’s mini-clinic on barefoot trimming and Easycare hoof care products such as the different options in boots and glues. I understand he then proceeded to glue on several sets of boots for the next three days of riding. I made it to camp, set up my horse and headed over to the wine and cheese social where I got to meet up with old friends and talk over plans for the weekend.

I headed back over to my camp where I proceeded to attempt to do a good job applying my glue-on shells using the new Goober Glue, which sets up quicker and has a stronger bond. Things didn’t go beautifully, and I decided that I won’t try gluing on at ridecamp ever again. I was disorganized and messy, on top of being flustered and trying to make a good impression on my anti-boot-using-friends, who were watching. Despite a less than perfect application, boots were glued and we were off to bed. As I had two full days to make adjustments before my ride, I figured I could reapply anything that didn’t look quite right in the morning and still be good to go by Sunday.

Even though I was generously offered a horse to ride on Friday, I decided not to go because it was COLD and looked RAINY! Yes, I realize this makes me look like a wimp, but after the first couple rides this year I decided I was DONE riding in the crappy weather! I chose to sleep ’till nine, play with my pups and hang out with friends for the two days before my ride. By Saturday afternoon, I was bored and ready to go!! I took Replika on a quick leg-stretcher that afternoon and decided we were good to go. Boots looked great and she was fresh and spunky.

Saturday morning dawned after a restful nights sleep and off we were at 6AM. My first 80, I was ready to burst!! A very good friend and I started off happily down the road. Our first loop was to be about 15 miles, and took us to my most favorite vet check in that area- an old working ranch along the Oregon Trail. It’s gorgeous and oh-so-hospitable! 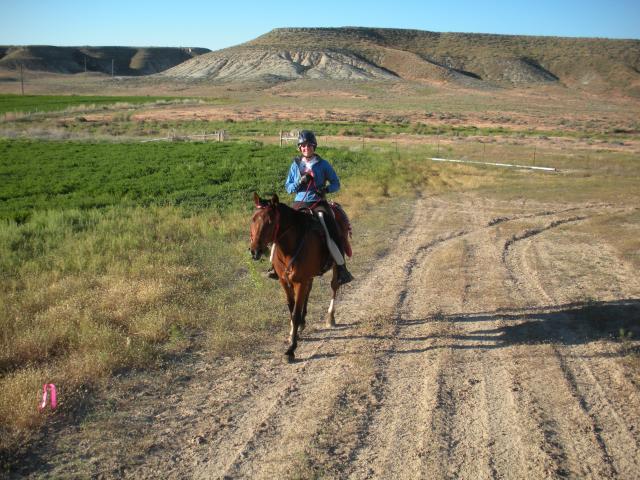 Here is Layne and Taz as we enter the alfalfa fields of the ranch. Taz and Replika were in heaven!

We cruised through our 50 minute hold, the horses happily grazing in the shade of old growth hard-wood trees, in the lush alfalfa field generously opened up by the ranchers. We were soon off up the Oregon Trail and eventually down the the Snake River. I must stop for a moment and explain the extreme wagon-driving that had to have occurred to get the wagons UP the Oregon Trail leaving the ranch. Oh.My.Goodness. We couldn’t even fathom the amount of blood, sweat and tears it had to have taken to get those wagons up the steep, rocky trail to the top. Wow. We were lucky enough to ride through wagon ruts deeply embedded into the soil. How many people get that opportunity, and do to it atop a good horse? 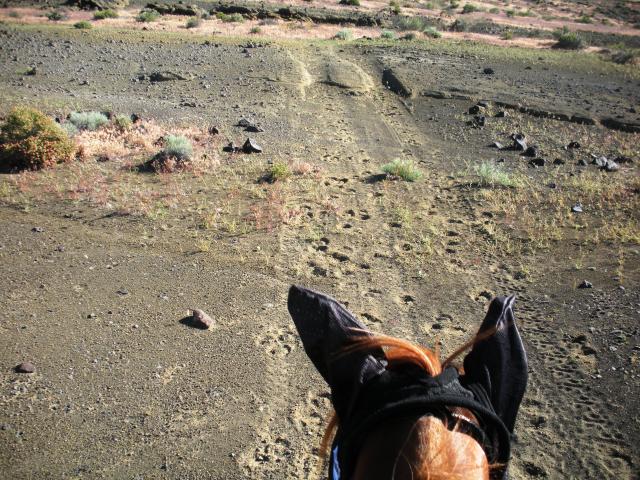 Aren’t those ruts amazing? I wish I had pictures of the climb up the trail to this point.

We rode along the flats up to of the Snake River Canyon before eventually coming to the rim and heading down. We were then fortunate enough to be able to ride the trail from the Owyhee Spring 60 AGAIN! We are so lucky!! 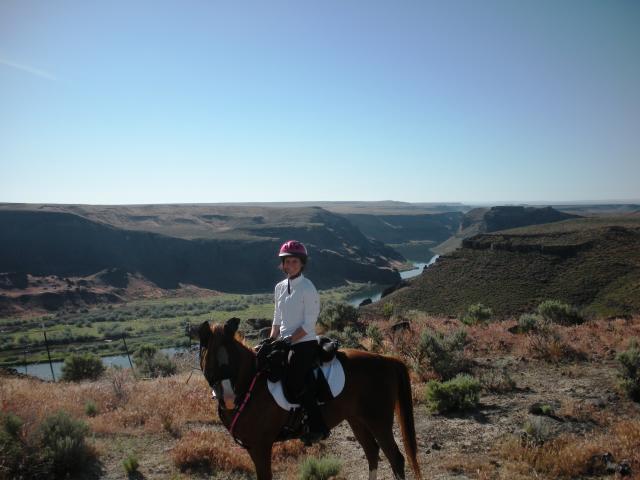 Replika and I up on top of the Snake River Canyon prior to heading down to the river. The gnats can be REALLY bad down there, hence the fly mask!

We rode along the river at the bottom for miles and miles, trotting, cantering, walking and talking. It really doesn’t get much better than this. 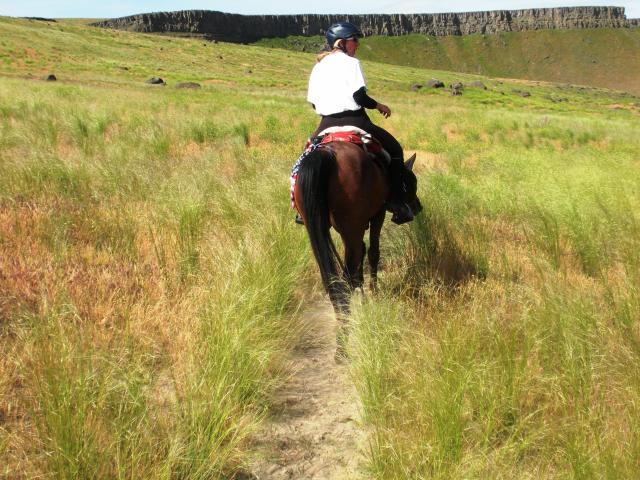 The trail all day was mostly one big 80-mile buffet. No excuse for poor gut sounds out here!

We eventually came to a narrowing of the trail, which turned into a little goat trail navigating a path of sharp rocks and boulders, the horses often scrambling to get up and over them. Replika had spooked herself after spotting a boat tucked in under the rocks and thought FOR SURE the man fishing on the deck of the boat was really looking for a little red mare to put on the barbecue for lunch. Unfortunately we had some trouble with the rocks and she ended up catching a foot and cutting up her lips. I felt awful, but was extremely thankful for the Easyboot Glue-Ons and the strong-holding Goober Glue. My friend’s horse slipped and slid over the rocks in regular steel shoes. Unfortunately he ended up getting pulled at the vet check shortly after the rocky path which landed us on our own for the rest of the ride. 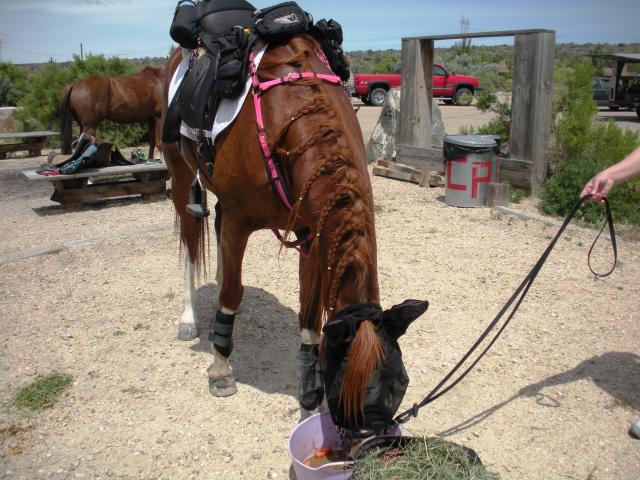 Replika at the second vet-check, chowing down, like normal. Easyboot Glue-Ons holding STRONG! 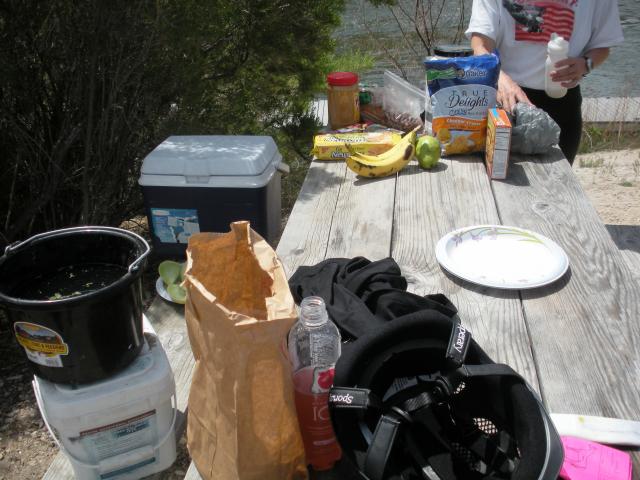 This is completely un-related but take a look at the spread that was ready for us when we got in!! Hot damn talk about setting some high expectations for the next one!

After the hold, I set out on my own back to the ranch that was the first vet check. I thankfully caught up to Karen and her riding buddy. Karen was riding her chestnut with chrome boy, Z Summer Thunder. I was lucky enough to ride her other gelding, Z Blue Lightning, the last time we were on this stretch of river so it was fun doing it again! Karen and Thunder were on the 100 with their trusty Easyboot Gloves. Thunder navigated his way back through the rocks without a problem in his Gloves. Replika, much calmer this go around, did much better and I appreciated the grip the glue-ons offered. If there was going to be a boot problem on this ride this is where it would have been. We were so pleased with the performance of the boots all day!
We came back into the ranch vet check together, and after another 50 minute hold Replika and I were off like a rocket! As we would be done when we got back into camp, I knew I could let her out a notch. We rode the trail this morning and knew exactly what to camp. I can’t even describe the feeling I felt, being out there just the two of us, flying down the trail *this close* to completing an 80 mile ride. The miles ticked away and we were soon trotting into camp. Did we really just do that loop faster than we did this morning? We DID and it was FUN! Replika vetted in perfectly after coming down to 60 immediately after crossing the finish line at a trot. 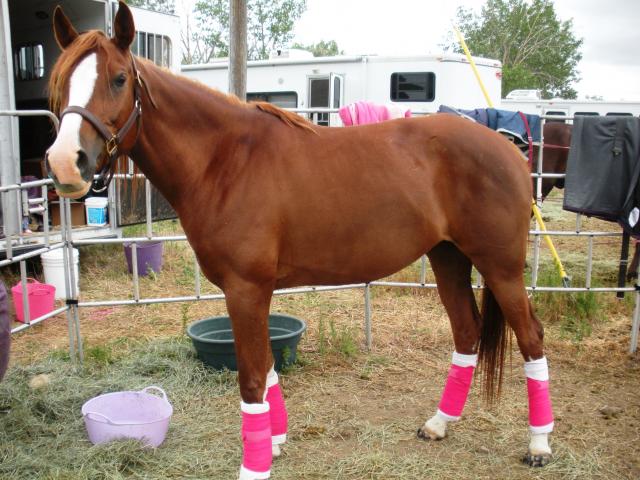 Replika the next morning, after I pulled her boots. They were on from Thursday night to Monday morning. Within the hour her feet looked like they had been bare all along.

After coming off from my runner’s (rider’s?) high, I headed to bed. Before getting there, however, I slipped in to Replika’s pen to find her bedded down for the night. I sat down with her, and she placed her nose on my knee. It was all I could do not to cry, for after all this time of searching, I finally get it. I get that special relationship one has with only a handful of horses in their life, and get that special bond that only comes with time and miles together. I can only hope for more, and in turn, can only offer her the best. I feel like keeping her in protective hoof boots for rides, and barefoot the rest of the time, is the best option for footcare, for us anyway. I can’t wait for the next time, but for now Replika will get a well-deserved break before the next ride.

‘Till then, she’ll be barefoot and happy, with plenty of food… 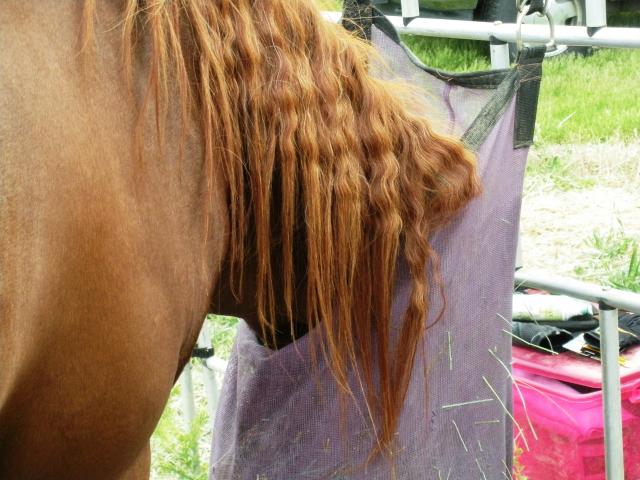