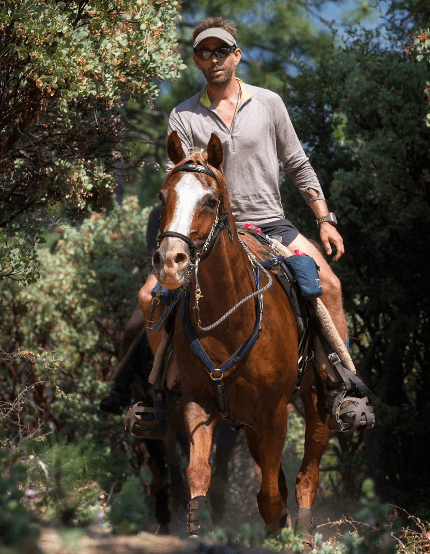 “To accomplish great things we must not only act, but also dream; not only plan, but also believe.” – Anatole France

I remember when I first entered this sport hearing about a ride called Tevis. It had the respect and reputation of an Olympic level challenge and in recent years, Time Magazine had given it the prestigious award to be one of the top ten toughest endurance events in the world. I had not yet dreamed, or, more importantly, believed, that I would one day be able to conquer this majestic 100-mile one-day event.

The winning duo cresting the bluff into Foresthill. Photo by Lynne Glazer.

The dream was born to embark upon Tevis in the spring of 2010. I asked Kevin Myers if I could ride his horse, Farrabba, aka Stoner. Stoner was an interesting case: he had competed in endurance in steel shoes in 2007 and 2008 but he would invariably come up very footsore at about 25 miles into any 50-mile event he entered. It was for this reason we hesitated over pulling his shoes until later in 2009. His hoof health improved dramatically over the next 12 months, but it was still a bold move to enter him into what is arguably the most challenging 100-mile event in the country.

2010 was our first summer training at the Easyboot R&D location in the mountains near Durango, Colorado, and I spent much of my training time with Kevin and Garrett Ford getting the horses ready. I believe it wise and wonderful to train with excellent horsemen: there is always so much to learn. We went on to complete the 2010 Tevis in 19th place, faster than we expected and hoped for. It was Stoner’s first 100-mile ride and my first Tevis ride. It was a dream come true, and we would return to complete the modified Tevis trail in 2011 in the top 20. 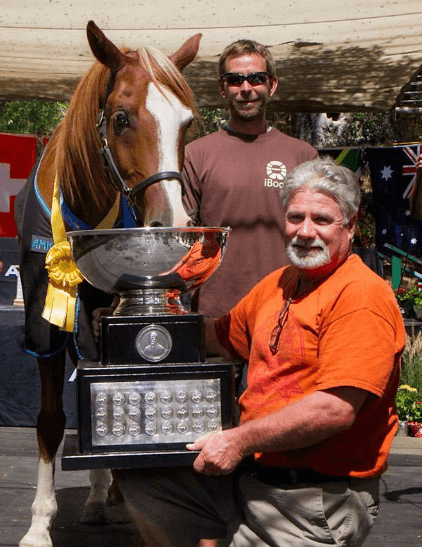 Rusty Toth with Stoner, who seems to appreciate the grain inside the cup,
accept the 2012 Haggin Cup from ride director Chuck Stalley.

2012 Tevis season was soon upon us, and a new Tevis dream was formed. With encouragement from the people at EasyCare, we set a goal of completing in the top ten. As the dream became an aspiration, we set out to learn and absorb as much as we could. I would need to increase the skill and intensity of our training and nutrition program. I kept an open mind, I asked questions and I applied what worked for our horses.

Our entire ride season building up to Tevis was a testing ground for what we were learning. We used a new electrolyte protocol developed by Heather and Jeremy Reynolds and tweaked it to fit our own personal horses. We did some excellent reading (4th Gear, by Dennis Summers) and followed sound advice from experts around us. We built a training program that involved greater speed over shorter distances. All this new knowledge is useless unless you truly believe in your horse and yourself. With Garrett and Kevin’s unquestionable support, I started to believe the dream was achievable.

Dream big; set a goal; do everything you can to achieve it. Surround yourself with people you respect and admire. Ask for help and accept it, take what you find works for you and apply it. Most importantly, believe. Believe that it can be done, that you and your horse are capable. 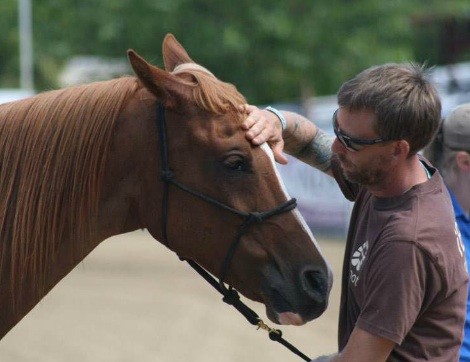 At the Haggin Cup judging. Photo by Merri Melde.

Letting go of my own fear and doubt, and trusting in all the preparation gave us one of those rides when it all comes together. The day was pure magical bliss. Stoner moved along with little need for anything but the freedom to do as he had worked so hard for. He was present in every moment of time.

I can still hear Dr. Fellers explain the esteem of the Haggin Cup at the awards ceremony the next day. I remember turning to Stoner and suddenly believing it could happen and saying “you know, you could win this”. And then it came, I heard Farrabba’s name announced. The feeling was unexplainable: euphoria and disbelief. We aimed for the moon and reached the stars. 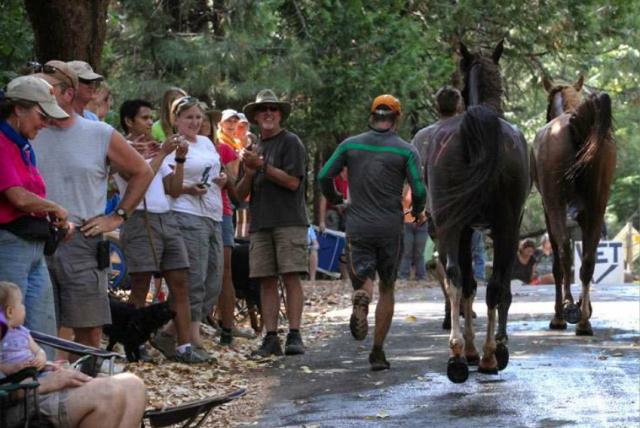 None of this would have been possible without the help of many. Our crew was nothing less than spectacular: Kandace French, Cathy Peterson, Leslie Spitzer and Linda Taxera. Huge thanks must go out to Easyboot for the Easyboot Glue-On and to Duncan McLaughlin for equine bodywork and training and nutrition strategies in the weeks leading up to the event. I am also profoundly grateful to the Ford’s crew, Rodger and Amy Ford, Gene Limlaw, Dale Gurney and Cole Ford. They are all most excellent people and I am grateful for their generosity and encouragement.

Thank you to Garrett and Lisa Ford for believing we could reach this goal and helping give me the confidence to attain it. Thank you to Kevin Myers for your support and guidance. Last but not least, to Stoner. You, my friend, are the true star and you shine brightly. I love you buddy: thank you for the ride of a lifetime. Thank you for turning a dream into a reality.

Dream big, and most importantly, believe you can do it.