So you think you know all there is to know about horses’ feet? You’ve not only heard the saying “No foot, no horse,” you claimed to have coined it yourself? Well, here’s a chance to test your hoof-care savvy. The result reflects not only ancient wisdom but current knowledge of the equine foot.

Q: Thrush comes from standing in mud or manure. 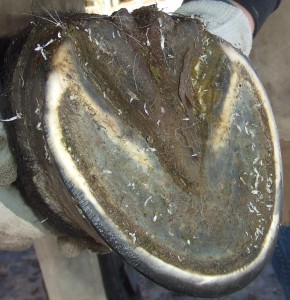 A: False. Although thrush is caused by a fungus-like organism that lives in filth, it is the health of a horse’s barefoot, not the condition of the ground, that determines the likelihood of its taking hold. Thrush usually invades horses hooves only when the frog tissue has been compromised by horse hoof problems such as injury or poor circulation.

Q: “Gravel” is caused by a trapped stone migrating up inside the barefoot hoof to the coronary band.

A: False. The condition known as “gravel” is an infection that has worked its way up through the white line, forming a pocket of pus under the horses hoof wall between the insensitive laminae and the sensitive laminae. It’s somewhat like a blister beneath the skin, with pus moving upward along the path of least resistance.

Although the condition may be precipitated when a pebble or other foreign body lodges in a space or gap in the white line, thus allowing infection to take hold, it is the fluid by-products of the infection that actually move up the barefoot hoof to the coronary band. In shod horses, the most common contaminant to start this process is a misdirected nail due. Not all tissues along the path are infected–they merely allow the pocket of pus an avenue to move upward toward the hairline, where it can drain. Treatment of this horse hoof problem usually consists of poulticing to encourage the passage of infected material out of the coronet and/or drainage through the white line.

A: True. Your horse’s hooves, like the rest of him, thrive on regular exercise. As a barefoot horse moves his feet, the cycle of pressure and release increases circulation to the barefoot hooves, thereby stimulating hoof-wall growth. When a horse stands still, on the other hand, the static load on his hooves inhibits circulation and slows new growth.

Q: During an extremely dry summer, it is necessary to wet down your horse’s hooves periodically.

A: False. It probably won’t hurt, but it’s not necessary to dampen a horse’s hooves in dry weather. In fact, the toughest hooves in the world are found on desert-bred wild horses, whose barefoot hooves are deprived of environmental moisture for months at a time.

That said, there are some management practices–such as frequent bathing with soap and water–that can interfere with the natural moisture balance of the hoof, causing it to become excessively dry. In such cases, moisture balance can be restored by applying hoof dressings that contain oils, wax or silicone.

A: True. But only to a point. A healthy horse with a well-balanced daily ration will probably have better feet than a malnourished horse. Conversely, horses suffering a deficiency of vitamins, minerals and other nutrients may exhibit a specific horse hoof problem in the feet, such as reduced hoof quality and impaired hoof growth.

Of course, some nutrients are believed to especially benefit hoof health and growth, and some horses do indeed show improved foot quality when maintained long-term on a diet that includes certain levels of biotin or DL-methionine. Special hoof-building feed supplements are reported to be helpful for horses whose feet just won’t stay together.

Pharmaceutical products sometimes prescribed for navicular disease are aimed at increasing circulation to the distal capillary beds to bring about better hoof growth. But for an average horse, exercise (30-plus miles a week, divided into three to six outings) and at least six hours of active turnout each day will have the desired effect of increasing blood flow.

Keep in mind that improvements in hoof health take time. For example, a dietary hoof supplement must be fed consistently for four to six months, and even then it will just be beginning to make a change at the coronary band. The “new and improved” hoof tissue takes up to a year to grow all the way to the ground. Hooves also have a growing cycle–usually faster in the summer, slower in the winter–and change to reflect the workload placed upon them.

Q: The flares on unshod, untrimmed feet are a sign of trouble.

A: False. The horses hoof wall naturally cracks, chips off and falls away as it grows and becomes stressed by general exercise. In under exercised barefoot horses and some shod horses, the excess horn may bend outward from the bearing area. While not pretty, such a “flare”–along the quarter, for example–gets the overgrown wall out of the foot’s functional zone and allows the weight-bearing “pillars” and the sole on that side of the barefoot hoof to restore better contact.

Q: The fewer nails in the hoof, the better.

A: TRUE. Just because a horses shoe has eight nail holes, it doesn’t mean that eight nails need to be in the foot. As long as the shoe is secure, those extra nails simply mean more trauma to the hoof wall.