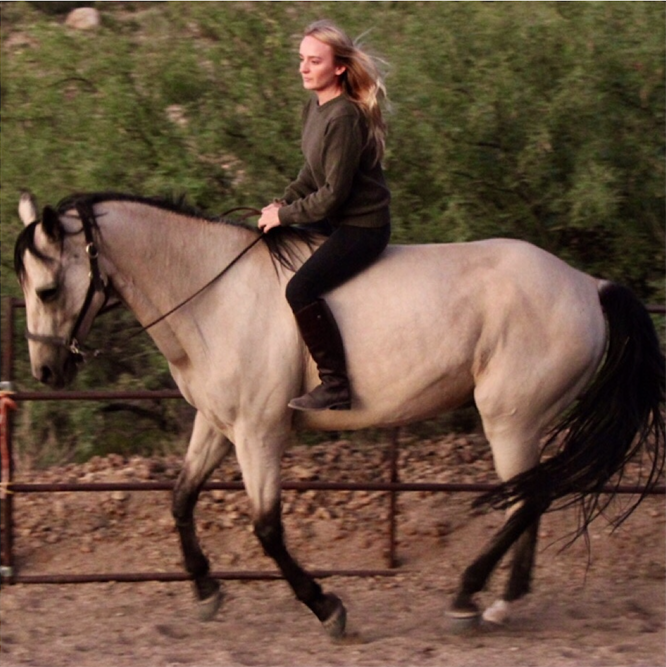 Shoeing a horse versus going barefoot has probably been an ongoing argument since the first day a horse sandal was made by braiding dry grasses together. It’s quite common to be skeptical of innovation. However, there are those who are always striving to make changes within established topics, especially by introducing new methods, ideas, or products. This is literally the definition of innovation.

Though I’m not certain of the exact evolution of the horseshoe, I do know that bars of steel were first forged and fastened to the horse’s hoof with nails over 2,000 years ago. This technique is still commonly used today. There are many stories about how steel shoes became synonymous with proper hoof care for domestic horses, and critics of the steel shoe have spoken up since the first day they were used.

Many vets and farriers agree that going barefoot, when possible, is better for the horse. There are too many factors involved to make it a black-and-white issue, though. I admit that going barefoot might not be the best option for every horse. Soft tissue development is the least understood and largest contributing factor to the grey area.

I believe that using steel to provide protection for the hoof is difficult without causing long-term damage. I’ve heard the argument made that steel rims were replaced by rubber tires for machinery over 100 years ago, yet some of us still don’t see or admit a problem with fastening steel rims to our horses’ hooves.

With that in mind, I want to share a true story of how one horse showed me the light, moved me out of the dark ages, and taught me to keep moving forward.

(If you want to read the backstory, click here to read a post about Santo in EasyCare’s December 2016 blog entitled, “Indicted”.)

When our youngest daughter, Claudia, was seven years old, my wife and I began looking for a horse for her to grow up on. We found BJ (short for Bucky Jr.). He was a five-year-old Quarter Horse that had been trained for roping, but just wasn’t competitive enough to succeed in that discipline. When we test-rode him, he seemed lazy and difficult to convince to move beyond a trot. We thought this horse would be an excellent match for Claudia while she was learning to ride. We also just wanted a good excuse to bring home this beautiful, silvery, buttermilk buckskin.

When he first arrived home, all the kids around the barn begged us to rename him Spirit after the buckskin mustang in the popular Disney film. However, every other buckskin in the barn had already been lovingly nicknamed Spirit. My wife came up with the name Santo, as in e spiritu Santo, to set him apart. Claudia now had her own horse to use in her riding lessons instead of the misbehaving, little, rodeo pony she had used previously.

We used the same farrier and kept Santo on the same six- to ten-week shoeing cycle as the rest of the horses in the barn. I made my living in the trades doing masonry for the most part, but I also worked with steel and wood. I always admired the horseshoeing trade, so I decided to learn to shoe. I practiced on Santo, and he did fine with me as his new farrier for about two years.

Santo’s “laziness” increased as time went on, though, until one day when he completely to walk. Our veterinarian came out to exam Santo and said that he was tied up.

The scientific name for tying up is rhabdomyolysis, which, simply translated, means muscle (myo) breakdown (lysis). There are many causes for rhabdomyolysis, but they all lead to intense muscle contraction and cramping along the back and rump of the horse.

The vet prescribed stall rest and more alfalfa, but instead of getting better, Santo’s condition worsened.

Radiographs from another veterinarian revealed late stages of navicular syndrome. We were a bit blown away by this diagnosis, as we weren’t expecting anything that serious. I didn’t blame anyone but myself for practicing on Santo while I was learning how to properly shoe a horse.

The veterinarian explained that Santo had conformation flaws, the worst of which were broken back pastern axes, that had likely been exasperated by some form of damage in his early years. I recalled Santo’s hesitancy to canter on our first test ride, along with how he’d been started on cows as a two-year-old, and it all made sense. It also explained why he was put up for sale when it was decided that he was not cut out for a roping career.

In order to distract myself from my guilt, I got busy trying to figure out how to fix Santo’s problem.

I took the veterinarian’s advice and hired a farrier to apply EDSS (Equine Digit Support System) shoes with wedge pads and medium rails on a five-week cycle. This was a game changer, or so it appeared at first. Santo was immediately able to move faster, but after our initial relief, we slowly realized that it was just faster, not better.

I know now what was going on, but I didn’t at the time. Santo was always popping forward from not being able to commit to his heels. The wedges and rails were providing the heel that he was missing and relieving the tendon strain. This was essentially stacking his bony columns more vertically over his toes to achieve a more desirable pastern angle with little tensile support from the tendons and ligaments (as these can take several months to adjust to even small changes). All of Santo’s weight transitioned off of his heels and onto his toes. We were just trading navicular pain for pedal osteitis (the solar erosion of P3).

I didn’t realize this was a dead end until the farrier who owned the farrier supply store warned me that I needed to keep him in medium rails as long as possible and avoid going to tall rails. When I asked her why, she simply said, “That’s the last adjustment.”

That’s when my heart sank. I realized that I had a bad habit of not asking enough questions. Shortly after pulling his last set of EDSS shoes, Santo was in the worst shape we could imagine. Along with the issues he was already dealing with, he was laminitic from having his soles trimmed flat until there were blood droplets forming between the tip of the frog and the laminae. To top it off, Santo was then diagnosed with Cushing’s. He was only seven at the time.

It’s true what they say about hitting rock bottom. Sometimes it’s a necessary step along the road to a life-changing event. We were really close to considering euthanasia for Santo when I decided to start asking more questions. I began reading and re-reading everything I could find about feet. I wanted to learn more than just 2-dimensional or 3-dimensional balance.

What Santo really needed was thicker digital cushions and lateral cartilages to lean back on, and I needed to learn how to help him build them up.

Over the next year, I used weekly trims and EasyCare boots to rehab Santo to a comfort and performance level that was better than he had previously enjoyed. (I describe some of my barefoot learning curve in the December 2016 EasyCare blog, “Indicted“.)

I remember seeing a post from the President of EasyCare, Garrett Ford, promoting the new EasyShoe Performance before it was released in 2014. I remember being so impatient to get those EasyShoes that I modified the Easyboot Gloves I had to match his new design as closely as possible until they were officially released. These shoes have been a real game changer for Santo and many other horses in my care.

The thing I like about these shoes is that I can trim the feet exactly how I would if the horse was going barefoot. I can respect all the natural curves with the trim and then apply a super-flexible, rubber shoe that doesn’t inhibit the movement the curves allow. Proper use of this shoe not only allows flexion, but also helps counter that flexion with stability. The shoe also stretches as the foot grows, allowing my work to last longer.

I typically like to start work on a new horse with only barefoot trimming and movement. If the horse plateaus in that program and the client has the resources, though, I move to applying EasyShoes back-to-back at three- or four-week intervals. Three cycles in a row tends to be the minimum amount of time needed to obtain the results I want. I’ve also gone as long as eight months of using the EasyShoes in order to build live sole and soft tissue depth on hooves that started with next to none.

From my experience with horses like Santo, I believe the more the opposing forces of flexion and stability are brought into balance, the stronger and more comfortable the feet get, and the more the soft tissue develops. I believe EasyShoes can make bad feet good, and good feet better. They have quickly become a part of my development protocol. I use them whenever I can to build stronger feet.

I have never let myself off the hook for nearly putting the last nail in Santo’s coffin, but I have also come to see the bigger picture. I have seen how horses are ruined from being started and shod in steel too early because it prevents their digital cushions and lateral cartilages from developing properly.

Steel simply has no give. Flesh and bone do, as does rubber. EasyShoes remove the limits of regeneration. Steel shoes degenerated Santo’s feet to the point of nearly being euthanized at seven years old. The most we can expect from a steel shoe are the following indisputable, negative traits:

Today Santo still goes barefoot most of the time, but when weekly or bi-weekly trims are not enough to keep him comfortable and moving well, I use back-to-back applications of Easyboot Love Childs or modified Easyboot Glue-On at three-week intervals. Frequent, proper barefoot trimming has regenerated Santo’s feet enough to give him a second chance.

Helping horses reach old age comfortably can be challenging, especially when they have conformation flaws and have been diagnosed with severe navicular, Cushing’s, and laminitis. Santo is living proof that horses don’t have to fall apart as they get older, though, and there can be a better future for them. If modern hoof care can be used to continually build the feet, then the same is true for the rest of the horse.

And in case you’re wondering about Claudia, we ended up finding a different horse for her to fall in love with and grow up on. I guess you could say that Santo ended up being the horse that I grew up on.