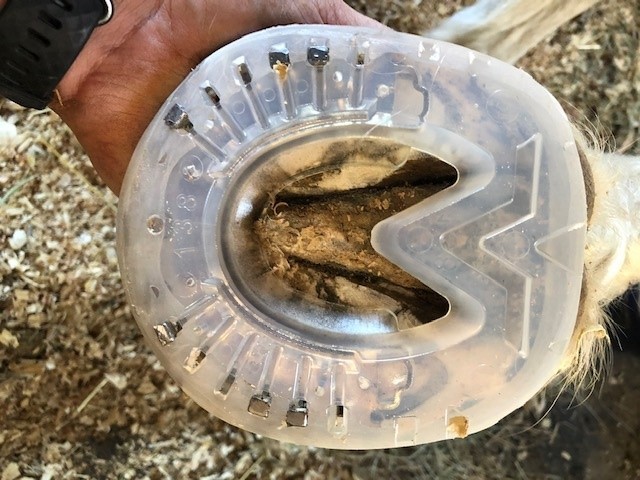 Recently I had a client ask for some help with an older horse with ringbone. Scout is 29, and has been doing well barefoot until recently. He is now having some trouble moving in any direction, and especially turning.

After assessing his movement, I could see how uncomfortable he was. I wanted to give him a shoe that would offer support, but would also reduce the leverage all around the hoof so it would be easier for him to move in every direction. I thought the EasyShoe Versa Grip would work perfectly. The steel insert would offer support, but the thickness of the shoe would allow me to modify it. After getting the correct shoe size, 138, it was off to the grinder to add a roll to the shoe. The shoe fit was great right out of the box, so all I had to do for fit was soften the heel corners just a bit. 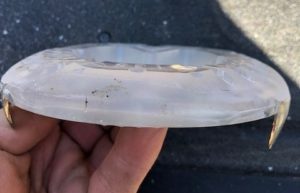 This shape will give him central support, but also offer a soft roll for handling the turns and easing his breakover. I wanted to try and get the same roll on both sides of the shoe for symmetry. I also used a rasp to get the nail head to match the roll of the shoe. If you leave the nail head above the roll, you will create leverage. It doesn’t look like much, but it can make a difference.

After applying the shoe, Scout was moving a little better. However, he was pretty ouchy to begin with, so we knew we would need to let the inflammation settle down a bit before we could see how much the shoe accomplished for him. 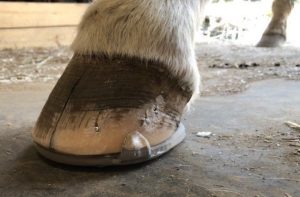 The following day, the owner beat me to the phone to tell me, “Scout is sooooo much better today.” The added bonus to the EasyShoe Versa Grip for Scout is if he wants a bit more leverage reduction in a certain area, he will naturally wear that spot down on the shoe. Once he gets it where he likes it, it will wear more evenly all the way around.

In a situation like this, when it is time for a new pair of shoes, I will pay attention to how the shoe has worn down, and work that same wear pattern into his new shoes. The EasyShoe Versa Grip can last a long while, though, so that may not be until this fall or next spring. In the meantime, we’ll keep resetting this pair, and pay attention to the wear pattern when we eventually start over with a new pair of shoes.

The “Versa”tility of this shoe is endless. At this point, your imagination is the biggest limiting factor in application of the shoe. EasyCare will soon be offering a Versa Rocker to add to the bottom of the Versa line of shoes, but until then, this is a good option.

Happy shoeing everyone. Until next time, keep your feet dry, glue warm, and nails straight.