We’ve been testing a new combination that’s working so well we think you should try it.

We had the good fortune to work with several riders at the Man Against Horse 50 last weekend. It was the perfect trail to test our new booting protocol of Easyboot Gloves in combination with Goober Hoof Pack. By adding glue to the sole of the foot, the horse benefits from additional solar protection for rocky or challenging trail. The boot also sticks to the foot with the help of the glue. We have tried this method with three different horses on three different (and very rocky) 50-mile races. We have yet to lose a boot. 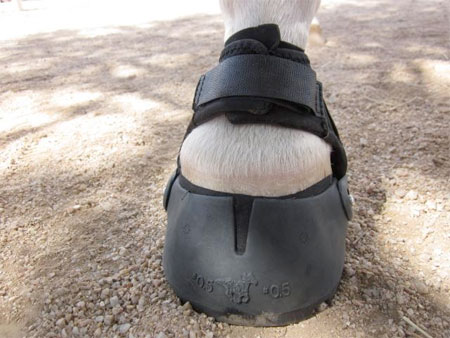 Here is a photo of the Glove glued on: no muss, no fuss.
The boots are easy to remove and the best thing is that the Goober Hoof Pack peels right out of the boot by hand so the boots can be used again and again. The video below explains the application process. Note: if you want to use this method, the boots should be applied 12-24 hours before the horse is to be ridden in order to allow the glue to set up. 24 hours is optimal.

Here’s what Julia Lynn Elias had to say:

“I’ve had several successful rides now with the Easyboot Glue-Ons, both at multi-day rides and 100 milers, but decided for our local Man Against Horse 1 day 50 mile ride I would like to stick with the Gloves. I love the Glue Ons, but hate the fact that once removed they are difficult, if not impossible, to re-use. I have done several 50’s in Gloves and have not had a problem with losing boots except on very steep climbs with slippery, rolling rocks. This particular ride has several such sections. On one part of the trail, there is a 2,000 foot climb in two miles, and most of the real climbing occurs in short switch backs with large step-up rocks. To minimize my risk of losing boots, I decided to try using Goober Hoof Pack (formerly known as Goober Glue) in the soles of the boots only. Kevin Myers and I discussed it and both agreed that this would serve three purposes, improve the adhesion of the boot to the hoof, provide more cushion for the impact of all the rocks we would encounter, and allow me to re-use the boots. The plan worked fabulously. I never lost a boot and my horse flew over the rocks like they were marshmallows. In fact, they were so well “stuck”, that it required a little effort with a flathead screwdriver to peel them off after the ride. This morning, I was able to peel the Hoof Pack out of the boots and now they are clean and ready for another ride. I was so pleased with this method that I think I will do it for every ride.”

Have you tried this with your Easyboot Gloves? If so, let us know how it worked or if you have any questions.