Yesterday morning I let Uno out of his paddock to roam while I mucked and fed everyone else. Within a few minutes, he was running in and out of the hay barn doing drive-by gallops and bucks, leaping about like a spring lamb. For such a chunky horse, he always amazes me how light on his feet he can be.

Best of all, I was thrilled to see him feeling so good after completing the 20 Mule Team 100 and the returning 13 hour trailer journey just over a week previously.

We made the trek down to Ridgecrest overshadowed by a less-than-promising weather forecast, but I was fresh off following the Yukon Quest sled dog race where they had to deal with -40°F for days on end so a bit of light snow wasn’t going to faze me. As my friend Renee says: “no-one likes a sissy”.

As usual we started our trip off with a bang – literally in this case – I blew a trailer tyre about three hours from home. Luckily I heard it go and was able to pull off the highway before it shredded and ripped the fender off. 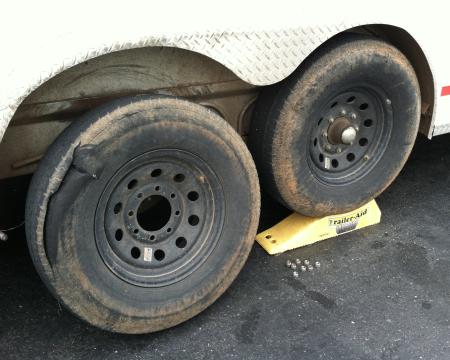 My jiffy jack lives permanently in my tack room in an easy-to-get-to spot, so it only took me about half an hour to get the tyre changed. I was glad it wasn’t raining, though, since the only way I can get the wheel back on the hub is to sit on the ground and balance it on my feet.

We arrived at 9 p.m. on Thursday to gusting winds which didn’t really let up until late on Friday. Welcome to the desert!

Friday lunchtime, my friend and most-excellent crew-person Kaity Elliott (she’s mine, all mine, and you can’t have her) showed up and we spent a happy 45 minutes glueing on Uno’s boots. This went very smoothly and the only time I was forced to mumble impolitely was when Uno knocked the schnozzle off the glue gun at an inopportune moment. We also had to interrupt the proceedings twice – once for a passing plastic bag (remember the wind?) and once when a low jet passed overhead – neither time Uno reacted, but I’d rather not be underneath him at these times “just in case”.

(Many thanks to Kevin for not only prodding me into glueing, but also making sure I had what I needed when I discovered I was missing half the necessary ingredients… like a pair of front boots.) 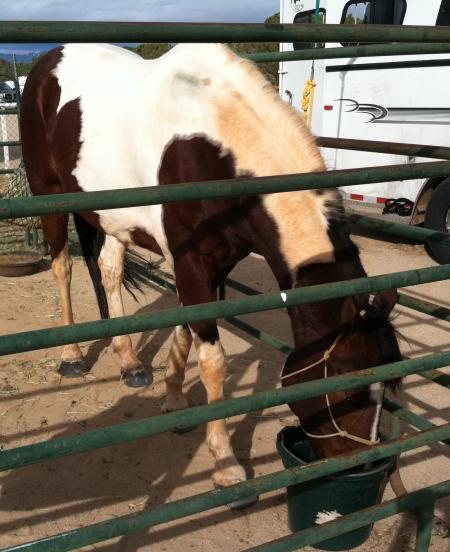 The ride itself was one of the more relaxed ones I’ve ever done. Although the forecast was for both rain and snow, it never reached us and instead we were blessed with bright sunshine the entire day. It was cold, but that worked out great for the woolly horses.

We started at 6 a.m. and although Uno was somewhat cheerful in the crisp air, he settled down fairly quickly when he realised his buddy-for-the-day wasn’t acting like an idiot the way he was. Despite having never met face-to-face, by the power of the internet, I’d arranged to ride with Crystal Stutz from AZ and her horse Groovy on his first 100. We both wanted to keep a sane pace and as it turned out the horses travelled beautifully together, keeping each other enthused without making each other crazy.

Shortly after the first vet check, we also gained a third rider, Rebekah Loscar, who was doing the 65 mile ride (same loop) and who’s horse, Misty, was having a confidence crisis. Both ladies made the day very fun and I thank them for their good humour throughout. 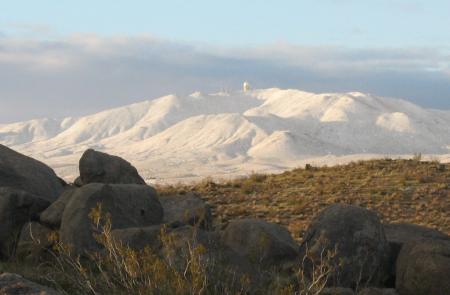 Laurel Mtn with a fresh dusting of snow. At the ride start, they thought they  were going to have to divert the trail away from the higher elevations to avoid the snow, but by the time we reached the first vet check at  17 miles, the original route was back on the menu – which was great as it was unbelievably beautiful out there. 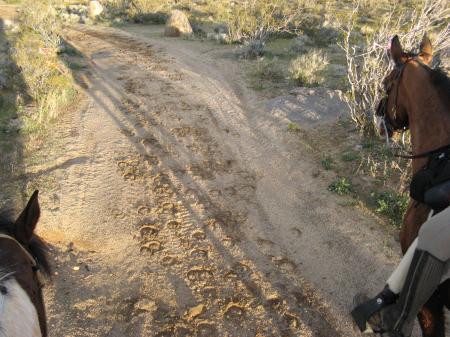 So much of the trail was perfect footing – the ride was probably a good candidate for a completely barefoot ride. 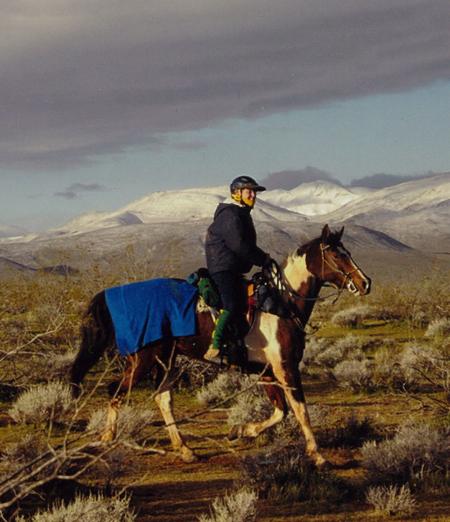 Uno and I, for once looking like we know what we’re doing. (photo: Rene Baylor) 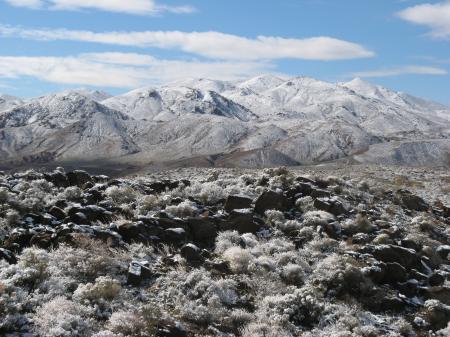 Beautiful views about 25 miles into the ride. 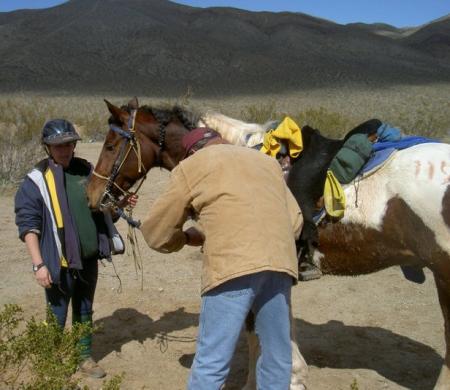 Vet check #2 at ~35 miles – Uno is pretending to be good during pulse-taking (not). It got really warm at this point. The riders all wished they were wearing less clothing and the horses were ultra-itchy and sweaty. (photo: Kaity Elliot) 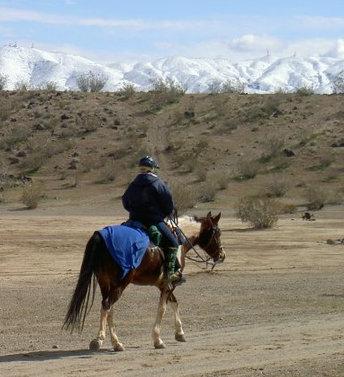 Leaving vet check #2 on the next leg. (photo: Kaity Elliot) 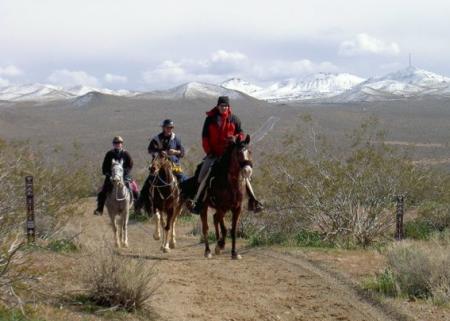 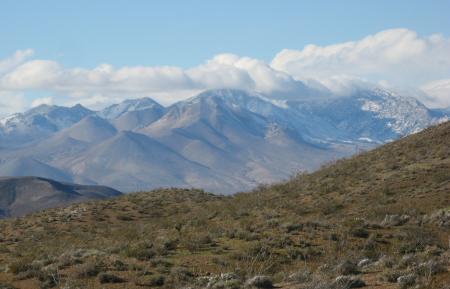 Looking north at around 45 miles. Sadly, shortly after this, Rebekah’s horse came up lame, so we bid her farewell and continued on. She hand-walked Misty another 7 miles to where she was met by the horse trailer. 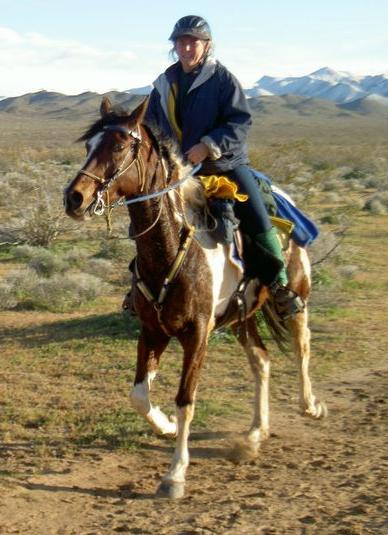 Approaching vet check #3, Uno and Groovy flew into this check on the  twisting singletrack trail – probably the most fun section of the entire day. (photo: Kaity Elliot)

But it wasn’t to be. As often happens when you move up in distance, what had worked fine for 50 milers didn’t work over that mileage – Groovy’s saddle was bothering him and he was suffering from a sore loin and was pulled from the ride. This was really a bummer as he’d been going so well the whole day and I felt bad for Crystal.

The even bigger bummer part, however, was that after having spent a really fun day with Groovy and Crystal – Uno and I were going to have to go out and do the last 35 mile loop on our own – and Uno doesn’t do “on his own” very well.

So the first 65 miles went excellently and we had a blast, but from 65-75 miles it got “interesting”.

Uno and I left around 8 pm and after an initial “I think it would be better if we either moved in sloooowww motion or went back to camp” for a few blocks, I got him to pick up the trot and maintain it for several miles while I chatted continuously to him (although we had to stop and inspect each glowstick with care before starting to trot again). After that was a long gradual hill that ride manager Melissa Ribley had warned me all horses get floppy on – and as promised he did. Once we were up on the ridge, I got him to trot nearly the whole top part (albeit with many spooks and frequent stopping to walk carefully past each glowstick/bush/trail marker). As we started to come off the ridge, he was getting less comfortable about the idea of trotting. He wasn’t physically tired, but I think mentally was wilting. But we’d done 10 miles in the dark, so I was pretty pleased.

My most excellent crew Kaity Elliott met us at the road crossing, and the food break for him and hot chocolate break for me helped us both. After crossing hwy 395, we trotted for another half a mile or so, and then Uno was done. The trail was quite hard to follow – no moon and the glowsticks a little too far apart and designed so that you just had to “follow the trail you were on” until you reached the next one. Unfortunately, they didn’t take into account the many side trails that (probably in the daylight) didn’t look anything like the “main trail”, but in the dark you couldn’t tell, so you had to go carefully.

It was another 7 miles before we got over that ridge and down in the valley and it was blowing cold the whole time. I didn’t dare get off because I’d probably fall on my face and not be able to find a suitable mounting block, so stayed on and got progressively colder and stiffer. Uno, on the other hand, was walking along, very cheerfully in his power walk. After 7 miles, we rejoined the afternoon’s trail and I thought he’d perk up and be willing to trot, but the trail was singletrack and even harder to follow in the dark (several times we veered off it and I was worried we wouldn’t be able to find it again [it was only 10″ wide]. The glowsticks were very minimal.). He did perk up, but we didn’t speed up noticeably. If I asked him to trot, he’d stop dead and start backing up, so was telling me very clearly that he couldn’t. Left to his own devices, he was forward-moving, content, and walking fast.

Finally we got into VC#5 at 92 miles at about 1:30 a.m. – it had taken us about 2.5 hours to go the previous 10 miles (which actually isn’t that bad in the pitch black). At that check he ate ravenously and I ate a banana (score!). It was 36°F/2°C. I was wearing two layers of fleece legs and Kaity helped me poke hand warmers down along my quads and we put a couple in my gloves. We got out of there about 2:15 a.m. when Uno finally started to come up for air from his buffet.

After re-crossing hwy 395 again, the trail was wider, more obvious, and had less close bushes to be alarmed by and I thought I’d be able to talk him into trotting. But no, Uno was done, so still we walked.

Around 3 a.m. I started to sleep on and off (nice warm hand-warmers in trousis). He followed the trail, I hallucinated things (including an entire stock trailer at one point – couldn’t figure out why Uno wasn’t reacting to it <g>), kept an eye on the glowsticks, and tried to stay balanced, but was still more or less asleep.

After an hour or so, I woke up and started to worry that we were off trail – almost no glowsticks and I didn’t recognise some of the landmarks. But no, we were still in the right place. Looked at my watch and thought it said 3 a.m. Was very impressed that Uno had done 5 miles in 45 minutes in the dark with me asleep, before realising it was 4 a.m.. Not quite as impressive, but still pretty good considering he’d been flying solo for the last hour.

Down on the back roads in Ridgecrest, I finally got him to trot for about three blocks on a wide, wide, asphalt road – nothing either side of him for 50′ and the moon had come up, so he knew he was safe. His trot was smooth and clean and forward – nothing wrong with him physically, that’s for sure. Then the road narrowed again, and we continued our 20 Miles of Walking Experience.

We finally completed the 100 mile ride at 5:10 a.m. (we had been on track for about a 2 a.m. easy finish prior to Groovy being pulled). Uno and I walked the entire last 20 miles because he was too mentally “done” to be able to trot, even though he was physically capable of doing so.

No matter – I was absolutely thrilled with him and how he did. For a horse that doesn’t do “alone”, he stayed happy and cheerful and forward almost the entire time… we just weren’t going to trot :))

The following morning, the only real indication of having done anything was a lot of foot resting, so we turned him out in the arena and he lay down, Baby Jesus-style, in the warm sand for a few hours. I didn’t wrap or poultice his legs and he had virtually no filling whatsoever. 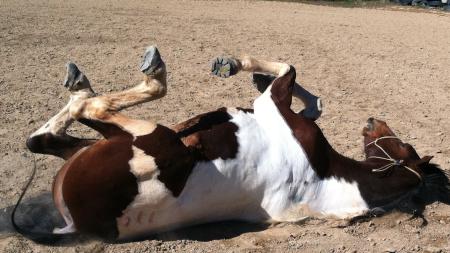 So Uno, once again, became the Pone That Could – impressing me with his happy demeanor the whole day and his willingness to go forward in the face of his fears (just so long as we didn’t have to trot in the dark). For a horse who wasn’t going to make a 100-mile horse, he’s not doing too badly.