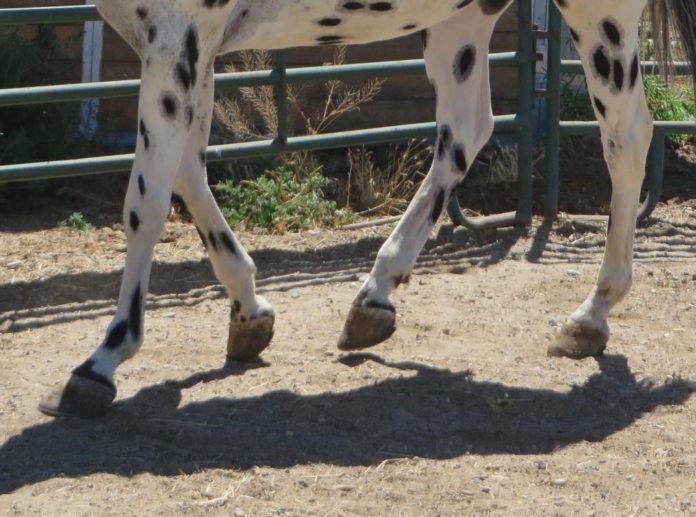 I brought home a new horse home at the end of July. Yeah I know, I didn’t need one, but he’s here and I love the big guy – all 16 hands of him and with pretty good sized hooves to match. When I brought him home, his hooves were shod and very long. 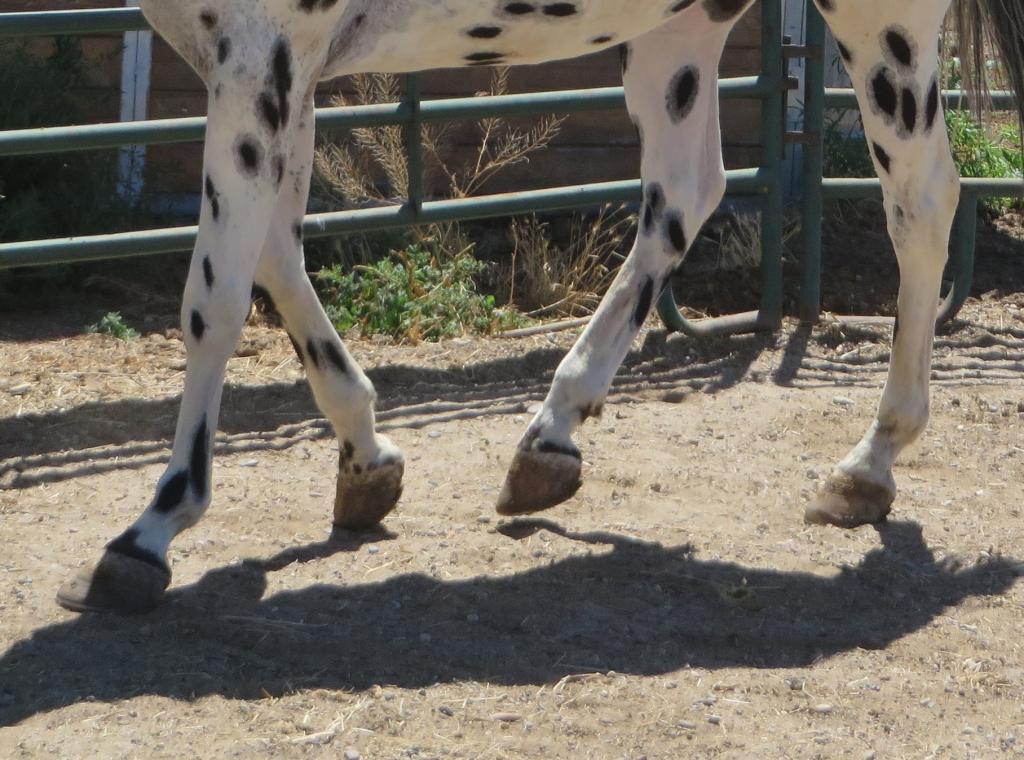 Further inspection showed that what should have been the sole of his hoof was actually covered with overgrown bar, giving him a flat hoof. He had a nice large frog and the corner of the shoe was digging into the edge of the frog.

My goal was to transition him to barefoot and use boots on him as needed. I knew that if I trimmed him up all at once so it looked correct and pretty, the chances of making him sore were quite good. So I opted for the slow and natural approach. We pulled the shoes, then I trimmed him a bit. Just taking off about 1/2 ” of wall, which still left a half inch. His frog was big and fleshy and I only trimmed the tags off and barely touched any of the over grown bar. My plan was the reject sand in the round pen, which is very course, would exfoliate the bar at a natural rate. Plus riding him in the sand on the hills would further exfoliate and wear some hoof down. This would allow nature to do the job and in the long run create a tougher hoof, all the while keeping the horse happy.

The first couple weeks I kept Rio in the pen by himself where he ran the fence on the course reject sand, wearing his hooves down and getting a nice slow “trim”. This was the easy way to do it in hot and dry August when hooves can be hard to trim in this country. After a month, a lot of the bar had sloughed out. His hoof was still somewhat flat as the sole had been buried by bar. I would just take a bit off the edges and round him up every 10 days. After a month, and in need of a bit of touch up trimming, his hooves looked like this: 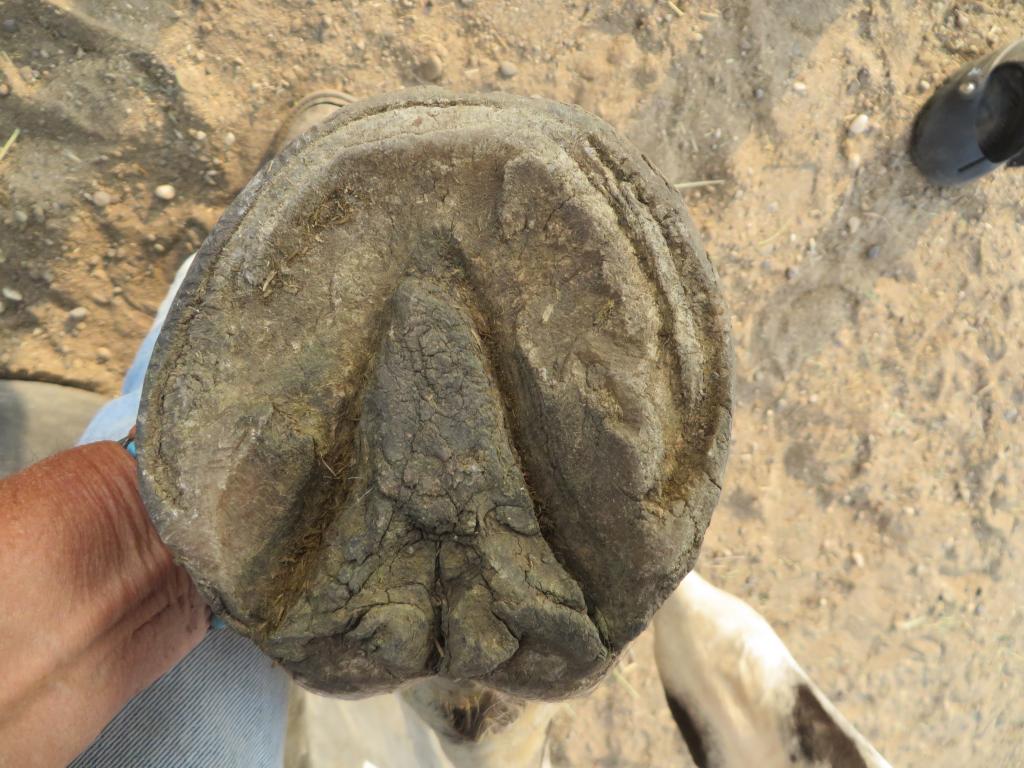 Now I know I could have rasped this down short, gotten rid of the separation, cleaned up the flare, pulled out more bar, but I was liking the results of “trim thy self”. It was slower but he wasn’t sore. And in the beginning his hooves weren’t loading flat, as can be seen by bar and the tell tale tip of the frog pointing one way. But even this was slowly improving. I told myself not to get in a hurry, and stick to the plan. 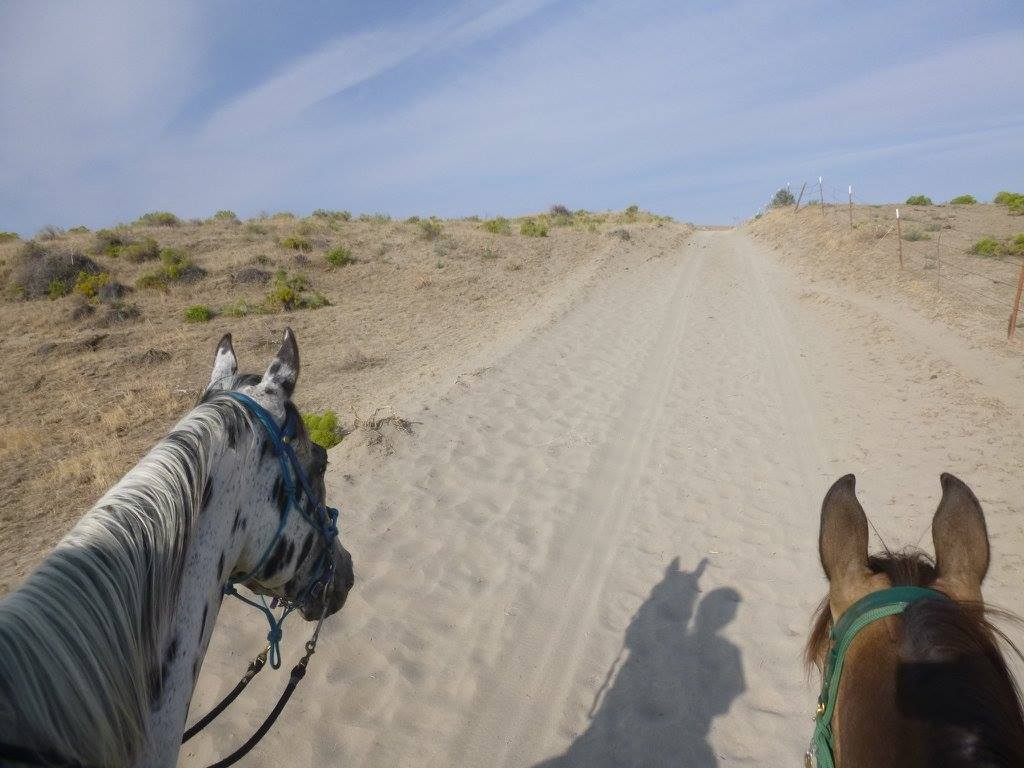 We ride in a lot of sand so I don’t always need to boot. But I picked up some used size 2 Gloves, my favorite boot, and fit them to him. 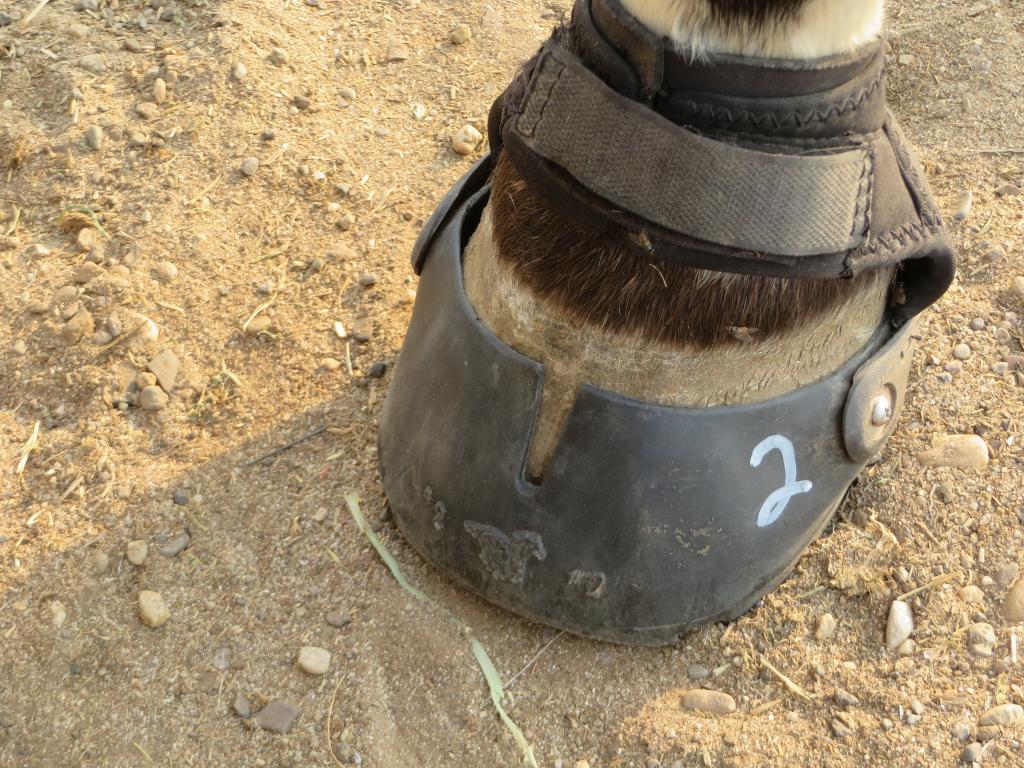 Since they were just a bit big, I ordered Power Straps to help the fit. I knew in transitioning that his hoof was going to change more and I wasn’t sure what size boot I would need for him later. But some places where we ride there are rocks, and I wanted to be prepared with boots that fit. 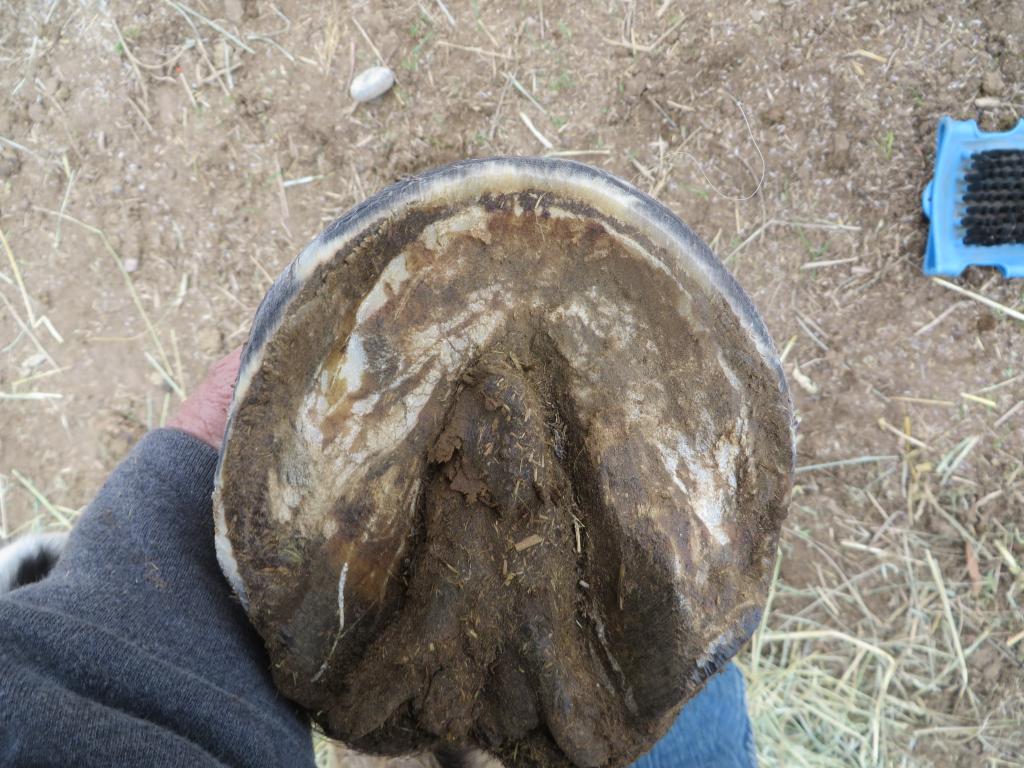 Our transitioning has been coming along slow but sure with only a slight bit of occasional soreness. As the hoof develops and balances, so the sole becomes thicker and more concave. Now the hoof is getting more uniform, still thin walled in the quarters, but that will come in time. It takes a full year to grow the hoof out. 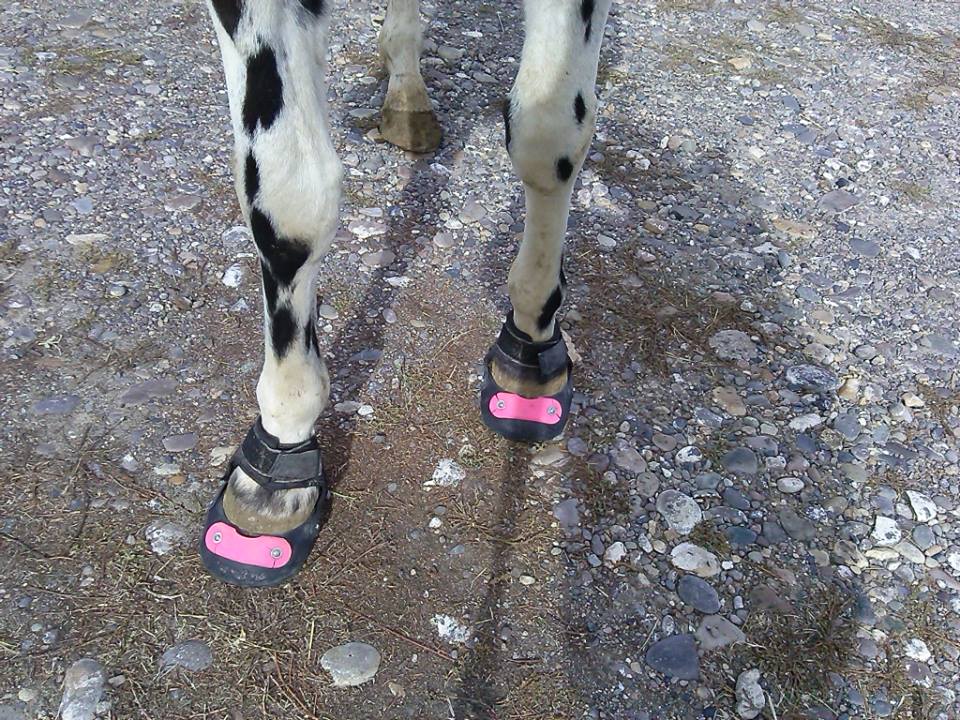 In 2 months he was pooching out the sides of the 2s so bad that I was afraid they’d tear. Now he wears a 2.5 Glove with a power strap. We still have a long way to go but oh, we have come so far. 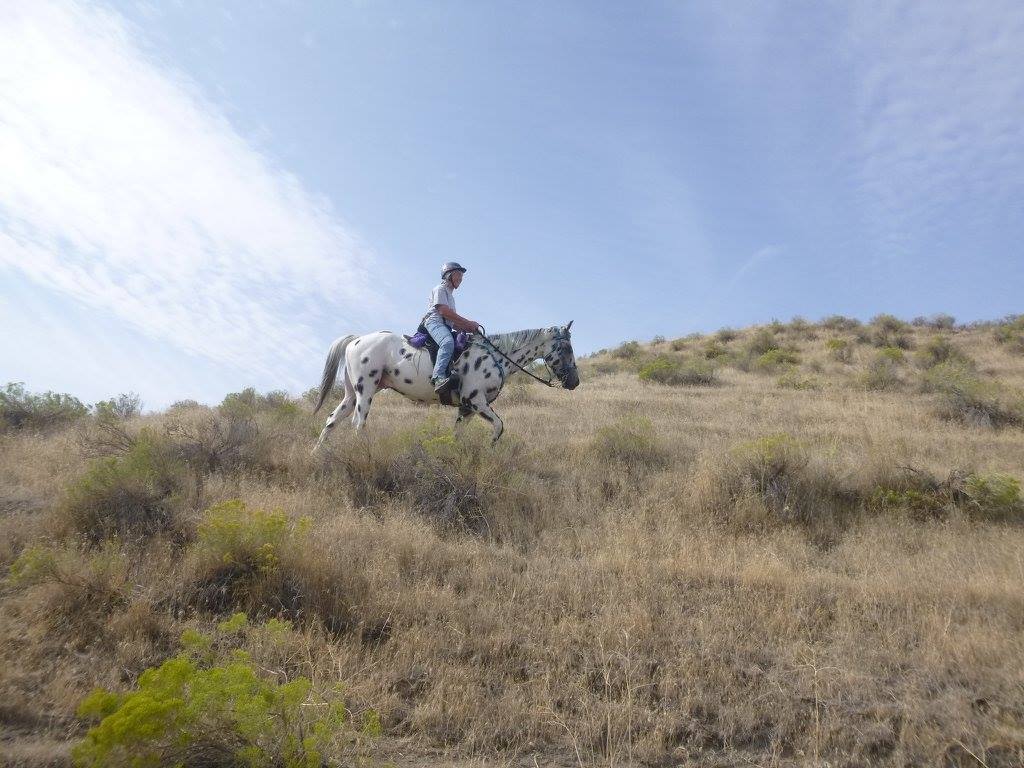 Three months of transitioning without lameness, and still being ridden as we continue the process. To me, that spells success.