I am a natural hoofcare provider and endurance rider living on the Northern California coast. I’m up by Eureka CA, almost to the Oregon border and a stone’s throw from the beach. I was asked by EasyCare to write an article about transitioning in a wet climate, as it seems many are written by people that live in more dry and warm climates with sand and rock. Those climates often  make it much easier to transition a horse to a barefoot lifestyle: it is a climate much more similar to what the horse’s ancestors and many feral horses live in. So the horses’ hooves do much better in a more arid environment.

Our climate is totally different, as is our terrain, and even our soil make-up. This leads to much frustration on the part of owners of transitioning horses, and even horses that have been barefoot for years. Some people tell me I’m not a real barefooter because I ride my horses 95% of the time in boots, vs in totally bare feet. I do this mainly because of the climate and terrain my horses live in. If I had thousands or tens of thousands of dollars to fix up all the property my horses live in with gravel, sand, etc, then maybe their feet would be better off. But I don’t and though I regret it, that is just something I have to deal with.

So I will never have one of those gravel crunching barefoot horses: so what? They live without boots most their lives, and only have boots on for the several hours I ride a week, and at endurance rides. If I am riding at the beach or some softer dirt trails. There are not many here: most are gravel roads and even the trails have gravel due to the constant mud and the need to keep erosion down. 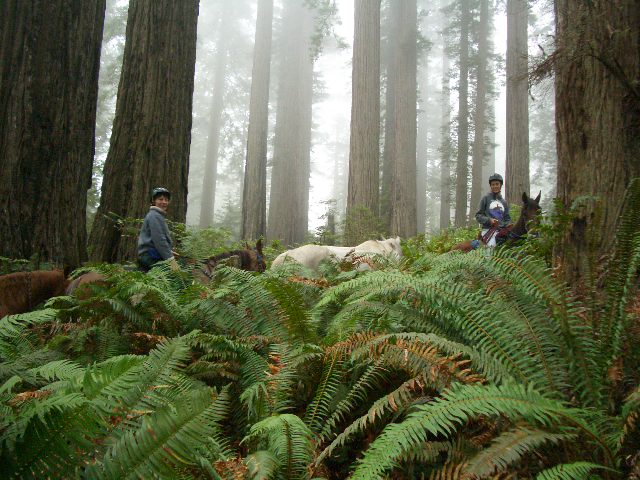 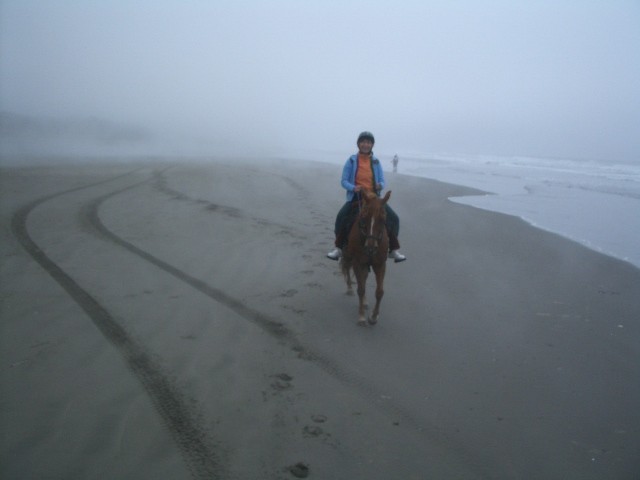 Late July in the Redwoods and on the beach. That thick fog is typical most the summer. Notice the sweatshirt/jackets? It stays cool here! In the winter it looks much like these pics, but add lots of rain and mud to the pictures.

Let me explain why a bit better. The terrain here is mostly soft grass and soil, mostly from decomposed Redwood duff, which is fairly acidic. It turns into fetlock deep and in some places deeper mud for six or more months of the year. It rains starting in October, and often doesn’t let up until April. It can go on through May or even June in bad years. Sure, we get some nice days, or even a week of sun here and there, but the ground is so saturated that it takes weeks of sun and wind to dry things up.

Then comes the second season (we joke we have two seasons here: rain and fog), which is June-September. This is when it gets nice and hot inland. The ocean fog gets slammed against our local mountains and we live in a sea of gray, cold, damp for half the day all summer long. So again, the soil/grass stays damp even in the summer and only dries out for four or five hours in the later afternoon. Our average temperature year round is about 50 F, so if you like warm, or seasons, do not move here :).

Of course we make up for that in stunning natural beauty that abounds here. The ocean, the lagoons and bays, the ancient Redwood forests and the rugged coastal mountains. And in September and October we sometimes have the nicest late summers once the fog disperses and before the rains hit. When the sun does appear in the winter, at least we can run around in t-shirts and not deal with snow, and in summer it never gets too hot (75F is a heatwave around here). So I guess it isn’t all too bad.

Just keeping horses barefoot is a problem. Let me illustrate this better in pictures. Since I often go into arid desert environments with my horses on endurance rides, I have been able to watch their feet change back and forth in the two climates. It is amazing what even two days in the dry does to the feet. Two weeks makes a total change in their feet. The soles toughen up, the frogs compact and start to build a callus and are no longer thrushy. The acidity in our soil eats at the frogs, leaving lots of flaps and crevices for thrush to hide in. Thrush is our biggest enemy at home and the feet actually tighten up and shrink a little. Between that and a fresh trim, I often have to use a half-size smaller Glove on the horses at desert rides, vs at home on training rides as they dry out. It’s amazing. 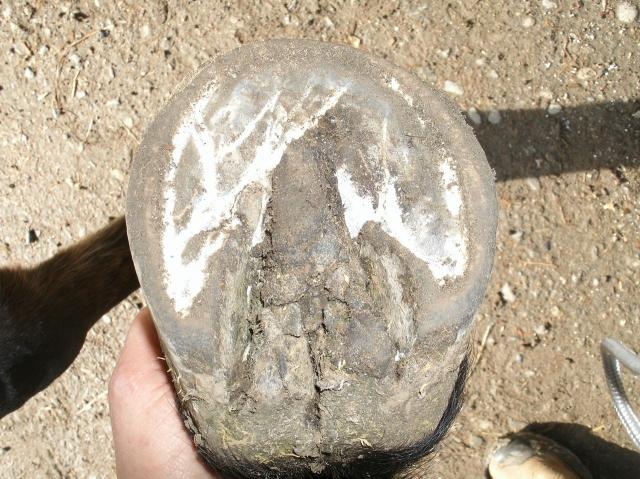 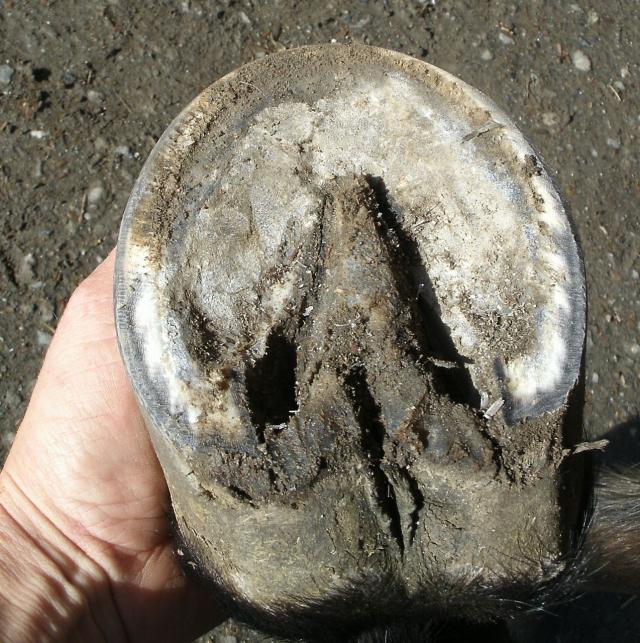 A client’s feet in January on a five week trim cycle. Lots of wall and bar growth and no wear in the mud. Frogs falling apart, deep cleft between bulbs: fairly typical. 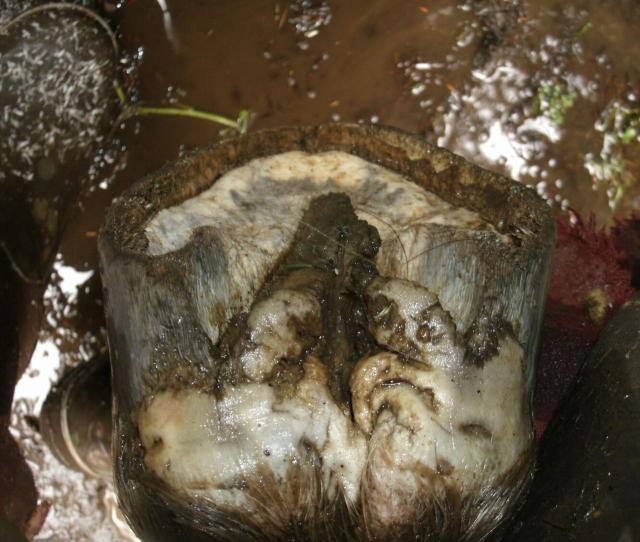 And another horse’s foot. This one lived on almost pure redwood soil. You can see how the frog is just getting all torn up and etched away. Even the sole gets a rough and pitted look in our climate. You can see the wet ground in the background Believe it our not, this was the driest area at the time (which is why I was working there…tools really get chewed up in Humboldt too, from these work conditions!) He had gone about three months without a trim do to owner health issues. 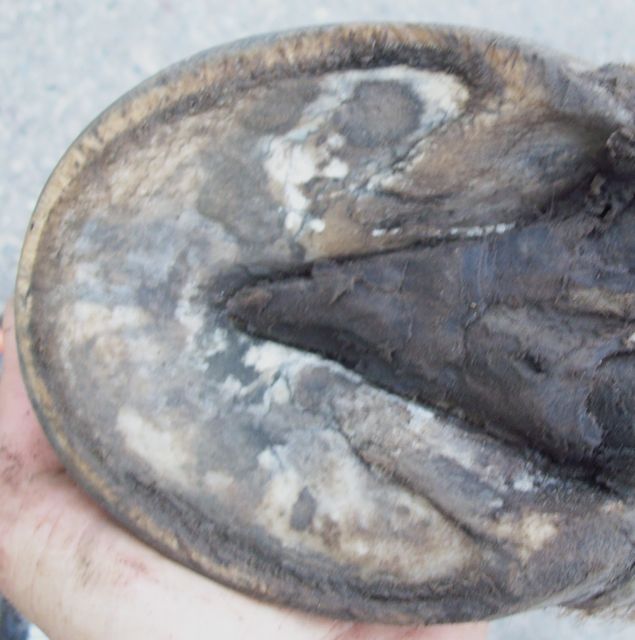 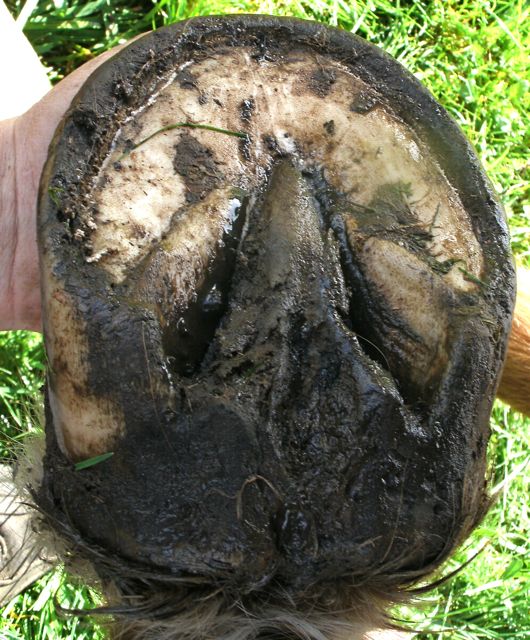 Some shots of my mare’s feet in the winter.. she does “ok”, but still has soft soles, and tattered frogs. All our horses are like this. She lives mostly on pasture grass with lots of muddy areas on the bottom of the hill. The boys live in a little more mud though, with some sand/gravel areas. 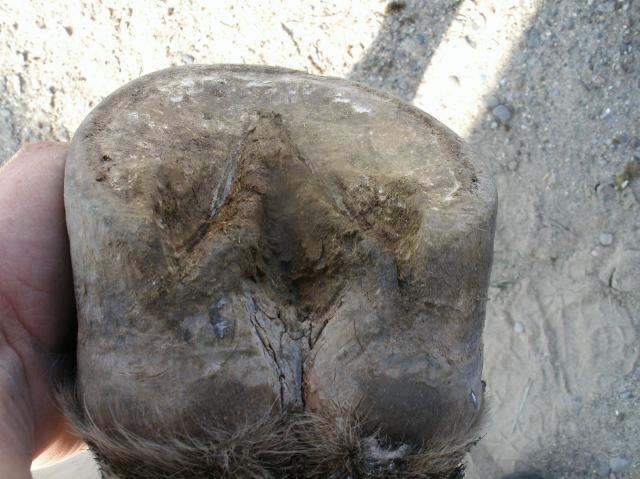 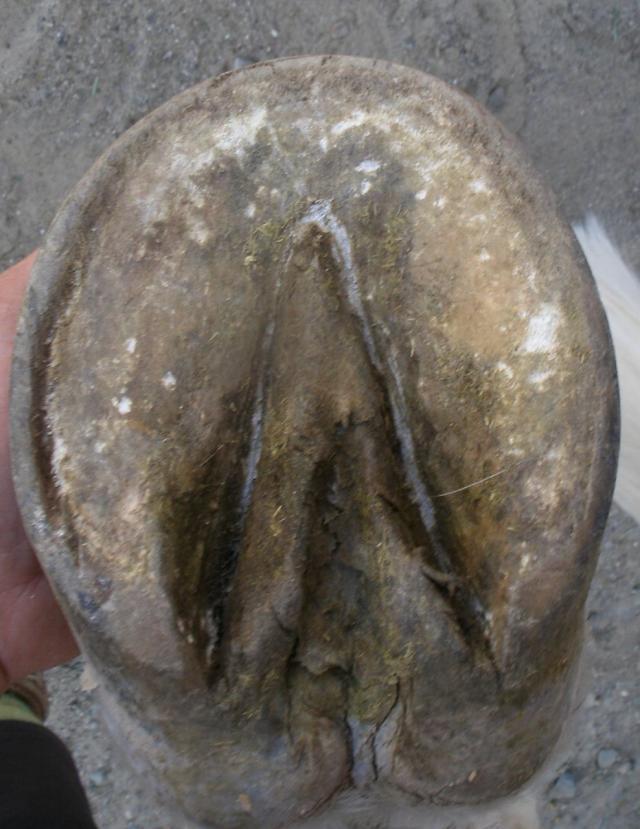 One of the boys, after two days on the road to a desert ride; sstanding on shavings in the trailer, and sand during our overnight and rest stops. Already you can see the feet are drying out, looking harder in the sole, and less messy frogs. 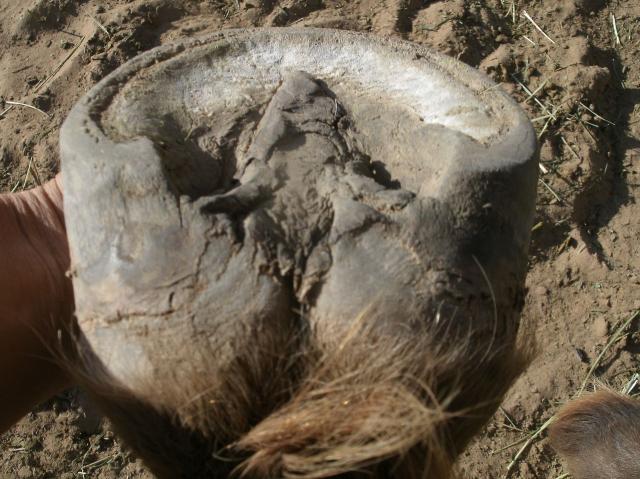 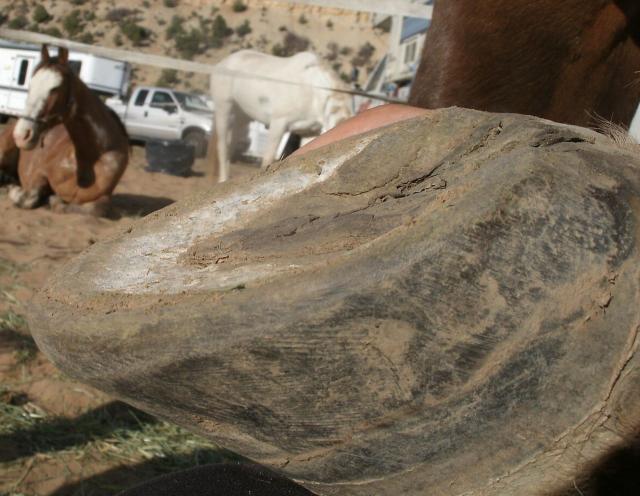 Front feet on my stallion after three weeks on dry ground and two weeks in sandy desert climes. You can see the old damage to his frogs. It was really starting to harden up and layer into a tough frog. There is nice concavity, the sole is dry and hard and the white line is no longer soft either. This is another issue we have: the white line area in our feet are always soft and thus open to bacteria and fungal infections, which then leads to separation and holes that mostly occur between the wall and white line. Then dirt and tiny rocks pack in, wedging the holes even more. This is a big issue here. 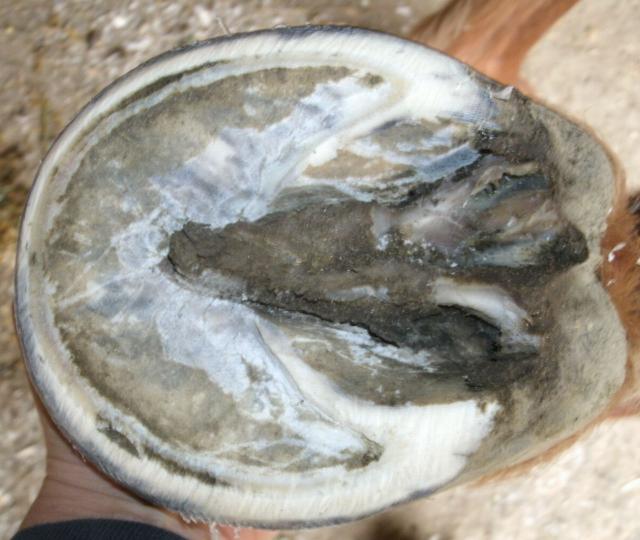 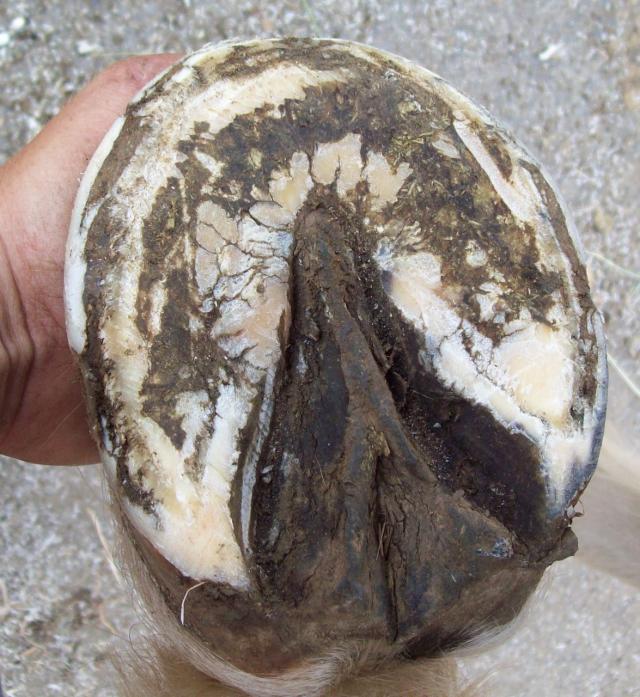 Here are pictures of this weakened white line problem. In the first hoof, you can see how it starts: a few cracks here and there and one or two small holes starting. Dirt is already packing into the holes. The second picture shows what happens when it gets out of hand and the owner or other hoofcare providers – this was my first trim on this particular horse – doesn’t stay on top of it. The area mostly between rather than in the actual white line, like in laminitis cases.

Look closely, and in most of that hoof you can see parts of the white line on the inside of the cracks by the sole. The wall and white line is stretched and pried apart and the holes are wedged way open. This causes lots of flares, wall cracks, chipping, you name it. It can work halfway up the hoof sometimes, and the only way I have found to fix it is to treat it like white line disease: cut and rasp away the walls where needed so there are as few areas more dirt/rocks can pack in. Do this until it all grows back out. This can of course take three to six months in bad cases, then winter hits again. It is hard to fix in winter when they are in mud all the time, so you summer is when you tend to fix this and thrush as much as possible. Aand we start the cycle all over. Very frustrating! 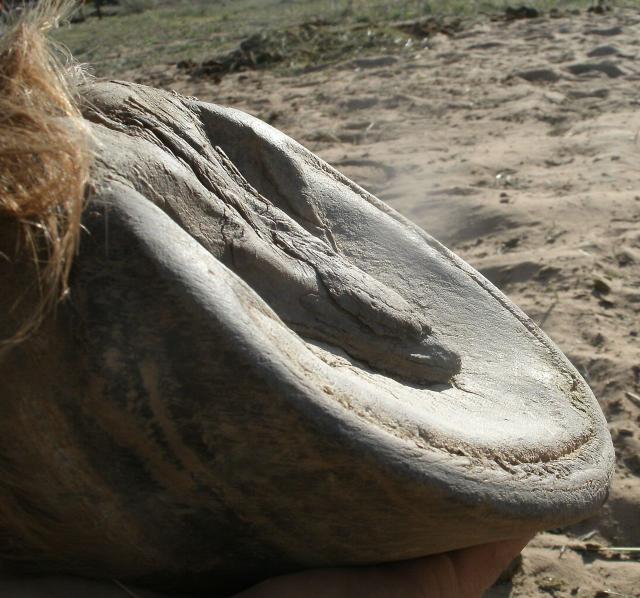 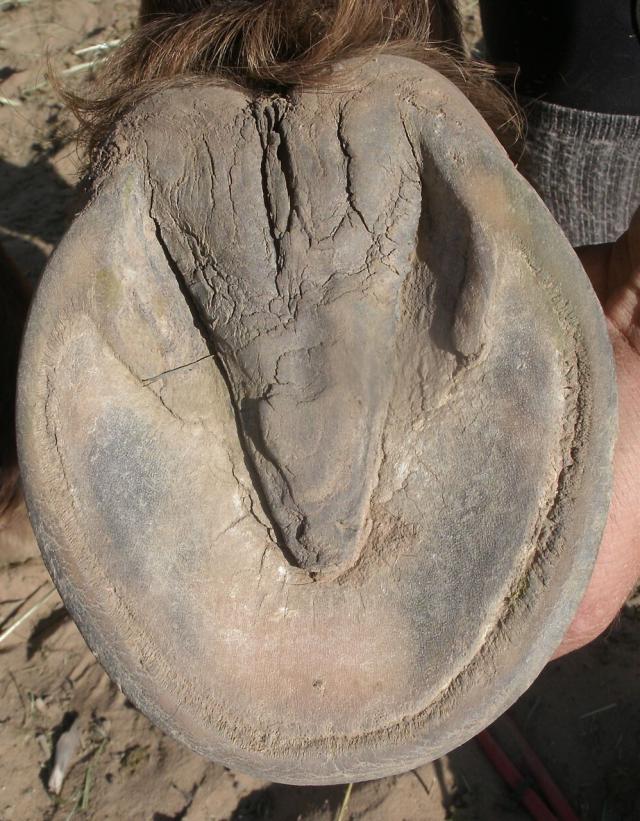 And these are my stallion’s hind feet, after the same time and two days of limited distance rides, where he did about half the miles with no boots. I felt I had to boot him over rocks or gravel though, as I didn’t feel he’d toughened up enough for that. He “seemed” ok, but I didn’t want to risk any bruising. The pictures look odd, but that is not bruising or anything. He actually has four black feet, but the sand/dirt was reddish here. After this, he got a “cleanup” trim to fix the bars and frogs. 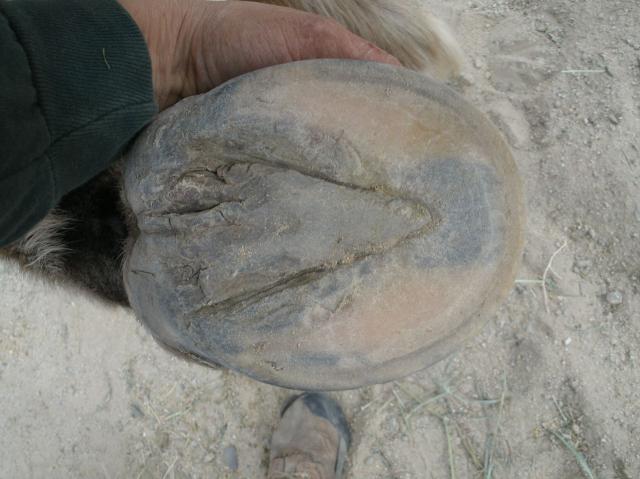 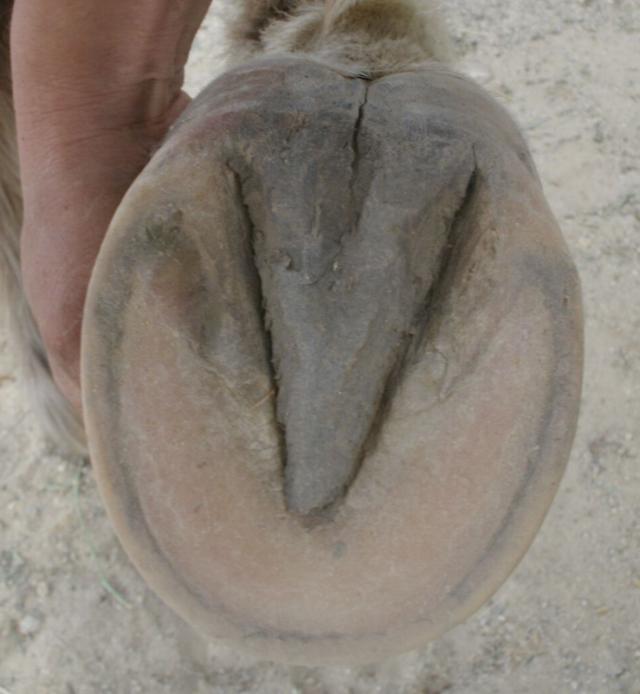 One of the other boys on the way home: really nice, polished hooves, tight white lines and frogs starting to look like normal frogs. I wish we could import five acres of sand and rock back home!

So as you can see from this brief glimpse into our world, we rely on boots about 95% of the time for the happiness and soundness of our riding partners. It makes the transition to barefooting a bit harder than in places where the feet just dry out and toughen up, and the ponies can be ridden totally bare much of the time.

We also fight with thrush and other fungal infections, and almost year round, the grass grows green and lush here, so we also have to be very careful about laminitis and other sugar related problems. Horses were not meant to live in our environment and climate. Despite that, they seem to have relatively healthy and sound feet if you are religious about keeping on top of trims and watching for/treating hoof problems. It just takes a little longer and requires more effort on the owner’s part than in easy climes. Of course, there always are a few horses that seem to transition with ease, no matter the conditions. Lucky owners of those few! 🙂