So today, since I have nothing to add regarding hoof boots, I would like to speak to the “I don’t have the facilities / time / equipment / skills to trim my own horse’s hooves” argument.  Hogwash!  I’m an amateur, for sure, but I’m holding my own with minimal equipment, and without any facilities, time, or formal instruction.  (I do admit it’s a lot easier with only one horse!)

For equipment, I just use a $10 rasp, a $25 hoof knife I was given by an old farrier (as his blessing to do my own trims), a round chainsaw file to sharpen the knife, and a basic $25 iron hoof stand… nothing else.  Anytime my back starts to hurt I stand up and stretch, and maybe walk Zephyr around for a moment.

I live in Maine, as you may have gathered, where there is snow on the ground for half the year.  I do not have a barn to trim hooves in, I’m SUPPOSED to have half of the garage for a grooming / tack / feed room but for the last year it’s been out of service because my husband was rewiring / insulating / sheetrocking / painting it in preparation for using his half as a workshop.  Instead I tie to the trailer.

This summer/fall, it was fine, I was trimming about once a week so it only took about 20-30 minutes to do a thorough job.  I could fit it in after work, or even before a weekend ride.  But this time of year is harder.  During the week I get home at 6pm, which right now is about 1.5 hours after dark, so hoof trimming waits until the weekend.  If a particular weekend is too cold, too snowy, too rainy, or too windy, hoof trimming doesn’t get done.  That’s OK, it can wait, I’m not riding in those conditions anyway!

Keep in mind that last summer I was re-learning to trim, and I accidentally allowed quite a bit of excess length and some hoof wall flares to develop.  My goal is, over time, to shorten Zephyr’s hooves overall and to eliminate those flares.  So my methods are specific to that, but you may find some helpful tips too, who knows.  I just do what works for my body and my horse, in my facilities (such as they are), and with my tools.

After cleaning out the hoof with a hoof pick and brush, and using the hoof knife to clean out the seat of corn, I start by putting the hoof on the hoof stand and “trimming from the top”, or making a vertical cut in the hoof wall.  Until recently I was going all the way to the white line with this, but now that the flares are under control I’m starting to be less drastic and only go to the water line.  If you’re confused what I mean, go here, click on “Do Trim”, and scroll down to “Back up the Toe”.  I’ve stolen a picture from that site to show what it looks like from the bottom, when half done.  The dark brown line is the “white line”, which in this case has stretched and attracted dirt, and the cream-colored line to the outside of that is the “water line”. 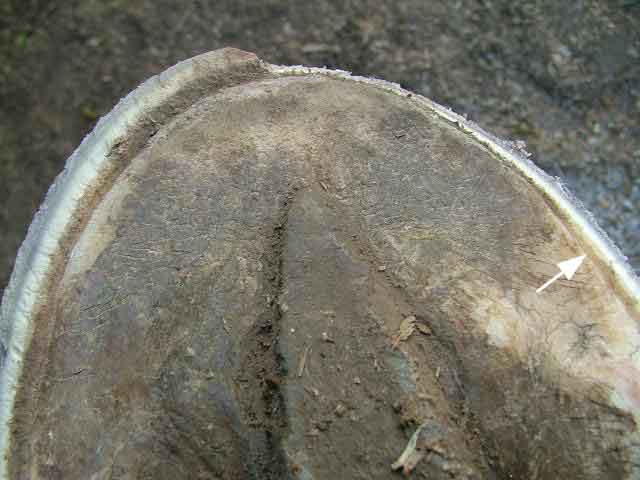 Once I’ve finished the Trimming from the Top part, I start working from the bottom.  I don’t tend to put the hoof between my legs (the classic farrier stance) because it feels awkward… I hold each front hoof with the inside hand, and rasp with the outside hand.

I rasp the quarters before I do the heels; it makes doing the heels easier because there’s less surface area to rasp.  I rasp the heels one side at a time, doing my best to avoid rasping toe callous or sole.  The best way to do this, I’ve found, is to rasp each heel individually with the rasp pointing from the middle of the heel to the outside of the hoof.

Many times, with front hooves, I will kneel on one knee, and place the hoof upside down on the other knee while I work on the heel.  For hind feet, I recently discovered that it works great to hold the hoof in the inside hand, turn the rasp handle-end away, grap the point/handle in my hand, and use my forearm to press the rasp against the hoof.  This gives great leverage and keeps the rasp level against the hoof.

Of course to check the balance I need to stand up and sight along the sole.  (Did you know the best way to check heel balance is to sight along the sole and compare the distance from the hairline to the heel?  As much as I’ve read about hoof trimming in the last few years, I had forgotten that tip until a farrier I recently had check my work reminded me of it.)

Then I finish the hoof with a strong “mustang roll” all the way around to discourage cracking and flares.

I do one hoof at a time until it looks finished, then go back and double check them all in the same order so any differences between the first hoof and the last hoof become more obvious.

I can’t wait until I have use of the garage again… for now, all of my tack and supplies are still in the trailer, which is about 200′ from the house, parked alongside a very icy paved driveway.  So before I trim Zephyr’s hooves, I have to liberally sand the driveway between the paddock gate and the area I’ll be working.  Even so, the hoof stand tends to scoot away if Zephyr puts much weight on his leg.

I did finally manage to trim Zephyr’s hooves last weekend, at about the 4-week mark, but unfortunately my camera wasn’t available.  It was interesting to work with that much growth.  His bars and heels were quite long compared to when I’ve been trimming every week, which made it very easy to see the medial-lateral imbalance that he tends to develop.  I was super careful to get that as balanced as I could, and was gratified that he was standing more under himself and with his legs more straight than before the trim.

I was thrilled with the lack of hoof flares, both on the sides of all four hooves (the white lines had stretched quite a bit), and on the fronts of his front hooves.  The side flares are just about gone, the white line is tight and dirt free!  The toe flares are almost gone, the white line has always been tight and dirt free but there was a scoop to the toe that is now very minimal and I was able to almost entirely eliminate it by rasping the bottom inch of the outsides of the hoof walls.  I do wish the frogs on his front feet were in better shape, but I doubt he’ll ever have the flat/hard frogs of a Western horse.  It’s just too wet here.

Again, I am an amateur who only has to learn how to trim one particular horse, and only needs to be effective in trimming style… there are no owners looking at me and thinking “I’ve never seen a farrier stand that way to trim a horse”.  I have horrible conditions to trim in, hardly any time to do it, basic/cheap equipment.  My saving grace is a willingness to admit when I’m in over my head, and to ask any and all farriers for input.  Occasionally I find one that I decide has less business trimming a horse than *I* do, but most of the time I find that the feedback is positive with just a few improvements or pointers.

Yours truly,
The Boot Maine-iac