Last weekend I volunteered at the local Dru Barner Fun Ride held just east of Georgetown, CA. They offer 5, 12, and 25 mile marked trails and all proceeds go back to the trails. Funnily enough, this Fun Ride was the first organized event I ever took a horse to in 1997.

On the main route, there are three locations where you have to cross pavement and two of them are ridiculously slippery if your horse is in steel shoes. They station volunteers at both spots to encourage riders to dismount and lead their horses across before remounting using the thoughtfully-provided mounting blocks.

Slipping on slick pavement is an activity I put very high on my list of “Stuff to Avoid at All Costs”. A few years back I got to watch a friend’s horse doing a skates-on-ice impersonation and they both went down. Luckily the horse was uninjured, but my friend had some interesting gravel adornments to his elbow, necessitating stitches. Not good.

This is, of course, one of those times when you can be smug in the knowledge that a horse wearing rubber boots or completely barefoot is A Good Thing.

I can think of several other times when I have been oh-so-grateful that my horse was barefoot. Many of them were pavement-related – for example that time when the friend riding behind us inadvertently knocked the wire fence we were riding alongside, causing Uno to levitate sideways straight down a 12′ bank (I thought I was a goner) onto the paved road below. As we plummeted down, I knew he was going to do the splits at the bottom and it would end in tears – completely forgetting that he was barefoot. Result = non-event.

Then there’s that mile-long stretch of pavement running through the middle of Foresthill during Tevis (premier 100 mile endurance event in the west). By then your horse has gone 70 miles and you don’t want him falling down. Slipping here has cost at least one person I know of the chance to finish Tevis. In boots, no problem.

Another endurance ride I know of has a trail that crosses a paved road. To avoid having motorized vehicles accessing the trail, they have put tall logs across the entrance – easy enough for the horse to hop over  …except that the hop lands you straight on the pavement, so equally easy to do the splits on the other side. In boots, no problem. 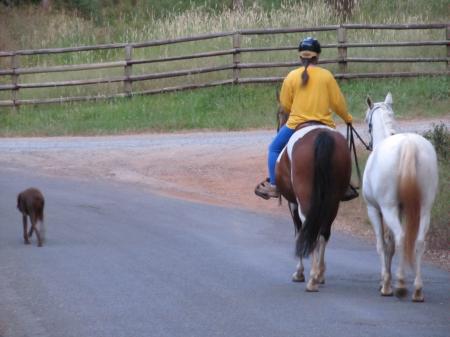 The short section of pavement we have to negotiate on our rehab ride.

While out on Uno’s rehab ride down the lane a few evenings ago, Chili Dog startled Roo (who I was ponying), who in turn startled Uno (who I was riding), causing him to scootle forwards. In his scramble, his back feet slipped underneath him (a reaction I took to be another of his recent Trigger rearing impersonations <sigh>), but it turned out to be a non-event. Had he been in shoes, I suspect we would have been on the ground.

And there have been non-pavement related incidents when I was glad of bare feet.

About a year ago I made the mistake of trying to remove a fly mask from Hopi’s head in the dark. He was already jumpy from some local visiting wildlife (mountain lion? bear?) and when I undid the velcro, he leapt forwards, running straight up over my body. I was pretty lucky not to be injured more severely – he stood on my instep, then my leg, clouted me on the back of the shoulder and then clipped the back of my head as he went over, causing my cap to fly off. But he was barefoot, so all I had were some nasty bruises. In shoes, I would have been a lot worse off. 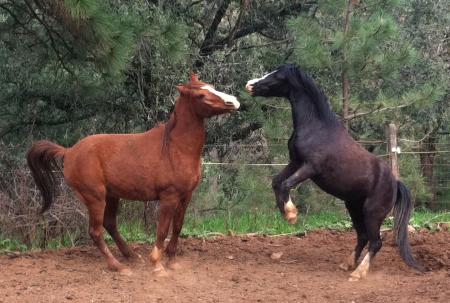 In another incident featuring Hopi, I was watching from the house when he double-barrelled Jackit in the shoulder and heard the crack from where I stood. Jackit limped away and I rushed outside fearing the worse. But it was nothing more than bruising and Jackit deserved it (he would delight in nipping at, then running circles around the other horses).

All in all, I would say I am pretty happy that my pones are barefoot – for my safety, and theirs.