I was very lucky to be able to ride a couple of days at Bryce XP in addition to helping Duncan McLaughlin work on his thermography study of shod and unshod horses. I tried a couple of application techniques with the Easyboots that I have not tested before at events. The results were more than encouraging. 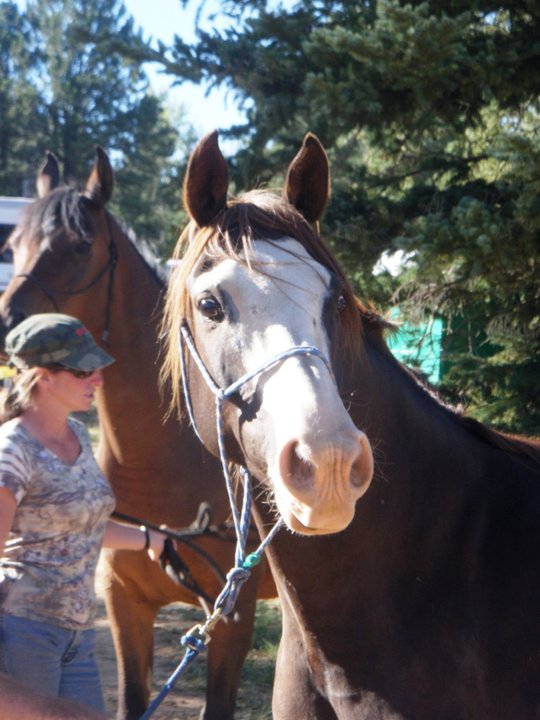 Far vetting in for Day 1.

1. They’re Called Power Straps for a Reason
I’ve not been an avid fan of using Power Straps on Easyboot Gloves since I switched from shod to barefoot in 2009. And when EasyCare was considering making the Power Straps standard on the Easyboot Glove late last year, my vote was not in favor of the change. If I was asked to vote again today, I would probably vote differently.

My strategy on Day 1 with Far was to ride fairly aggressively and if the circumstances allowed, to finish in the top ten. That obviously meant maintaining a good speed most of the day over a variety of trail conditions.

Bryce is one of the prettiest rides I’ve ever competed at and I’ve always found the trail to be taxing – there is a fair amount of dirt road and the high volume of precipitation there this summer has washed much of the topsoil away, leaving even more rocks than ever. The result is a hard-packed and rocky environment that is challenging for any horse.

Armed with a fresh new set of Easyboot Gloves installed with blinking white Power Straps, I applied the boots the morning of the ride with Mueller Athletic Tape wrapped four times around the hoof walll, just below the coronet band. I used a rubber mallet at the point of toe to make sure I got them on snugly. 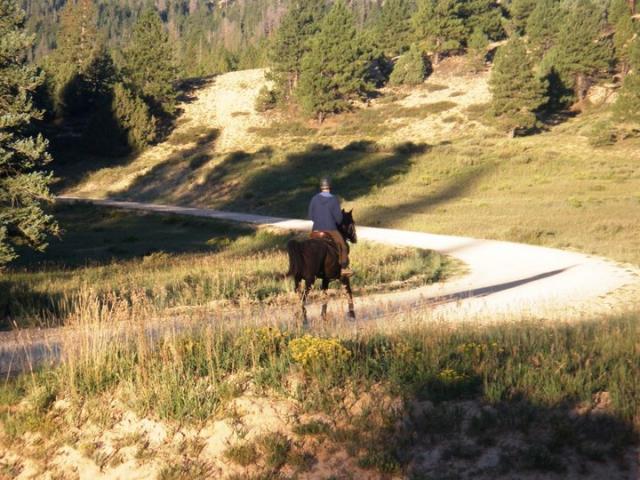 Setting out at the start of Day 1.

Far was his usual forward self and rather than hold him back all day, we did a lot of 12-14 mph trotting along with a fair amount of cantering. I probably cantered 25% – 30% of the race. 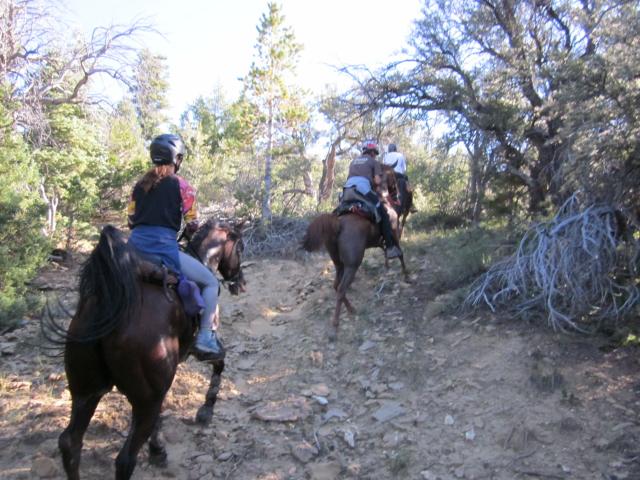 A varied and technical trail.

I’m pleased to report that we didn’t have one boot loss, even though we were traveling at great speed over a variety of challenging trails – including a healthy amount of climbing up technical trails.

2. Not To Glue? Well, Maybe a Little
There has been a fair amount of discussion since Garrett and The Fury’s Haggin Cup win at Tevis this year about the pros and cons of gluing on protective horse boots. On Day 2 at Bryce, I was to ride Stoner, aka Redford, who has not really done much in the way of work since his 19th place completion at Tevis at the end of July.

I wanted to step up the speed with him at Bryce the way I did with Far on Day 1. It would mean starting out at the front of the pack and maintaining a healthy cushion in front of the other riders for the rest of the day. Recognizing the toughness of the trail, we decided to use Easyboot Gloves, but add some shock absorbtion by applying Goober Glue to the sole of the foot. This meant we had to apply the boots the night before to allow the glue to set up enough. 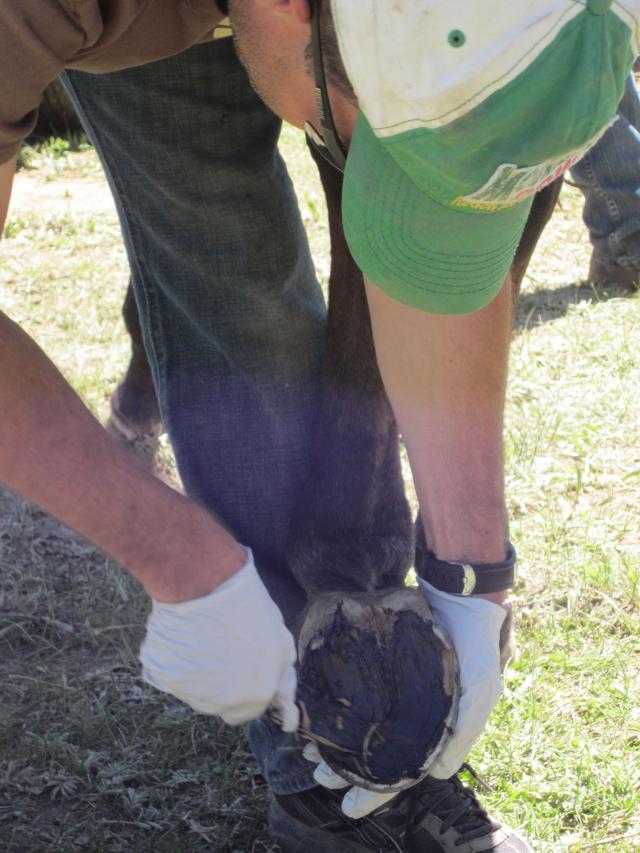 We thoroughly cleaned the foot with a hoof pick and a wire brush and wrapped Mueller Athletic Tape three times around the hoof wall. We then took the Goober Glue Hoof Pack and applied just enough glue to the sole of the foot to just flatten the concavity. We slipped on a set of Easyboot Gloves (fitted with Power Straps, of course), and applied the boots with a tight gaiter. We loosened the gaiters a couple of hours later and went to bed with fingers crossed. Note that we did not rough up the hoof wall or use any Adhere.

In the morning we checked inside the back of the gaiters to make sure no glue had oozed up behind the heel bulb. There was none. We set off at a terrific pace after a 20-minute warm-up around camp. We cantered and galloped the first three miles or so before riding along the most beautiful trails I’ve ever seen at an XP ride. It was the most consistently technical trail I’ve ridden there: lots of rock and challenging footing, a good share of drop-offs and lots of elevation gain.

We fitted four horses in this test set-up and none of them had any boot failures whatsoever. The trail felt softer to me than it had the day before, and we finished in fourth place, just minutes after first place rider Christoph. Stoner looked great at the trot-out for the Best Condition showing. 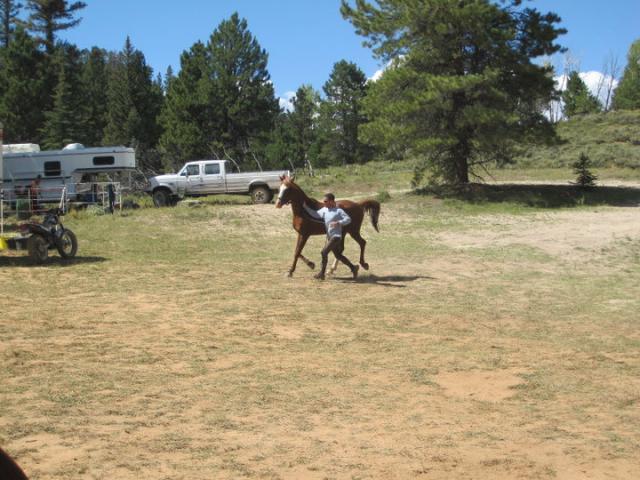 Showing Stoner for BC.

The best part of this application process was being able to remove the boots easily, and to pick the Goober Glue out by hand so the boots can be used again (and again).

3. Fear, Like Doubt, Gets You Nowhere
The ride at Bryce was the end of a three-month stint based out of the EasyCare research and development facility near Durango, Colorado. Bryce was a good lesson for me in terms of what can and cannot be achieved at an event.

One of the most rewarding things about EasyCare and the people that populate it is the absence of doubt in achieving the goal of designing the most dependable boot. Maybe that’s why the first place and Best Condition award went to a horse in Easyboot Gloves or Easyboot Glue-Ons every day of all five days at the Bryce XP?

Question for the Post
Have you tried Power Straps on your Easyboot Gloves? What has been your experience?