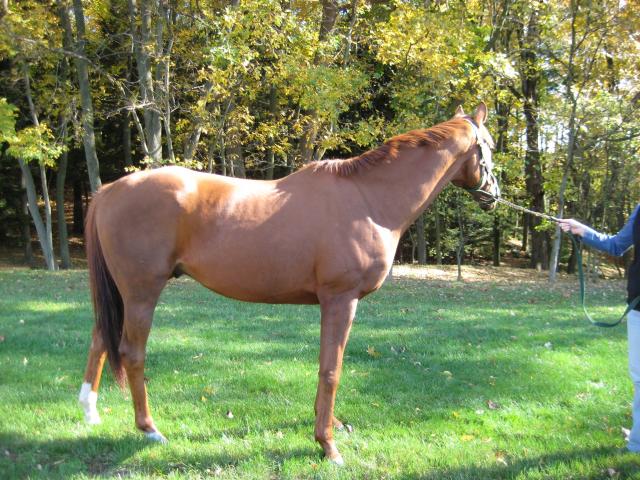 When you peruse ‘Practical Horseman’, ‘Equus’ or ‘Horse Illustrated’, you may find a professional saying, “Well barefeet might work for some horses, but never Thoroughbreds. They just don’t have good feet.” Or, “We’ve bred the feet off those Thoroughbreds.” If your friend described her new horse’s hooves as flat soled, long toed, with thin, shelly walls, don’t you immediately think, “Thoroughbred!” I know I do.

With the natural trim, EasyCare boots, good turnout, some body work and a saddle that fits, my friend and former client, Lyndsay, an owner-trimmer brought Garwin back from the brink. This handsome and talented thoroughbred was a few strides short of becoming a lawn ornament.

If Garwin can make a come back, I think you will agree, almost any Thoroughbred can!

When he developed debilitating subsolar abscesses in both front hooves, the vet excised the soles. His owner followed the vet’s directions for Garwin’s daily bandaging. When I met him, Garwin had been on stall rest for 3+ months and remained lame. 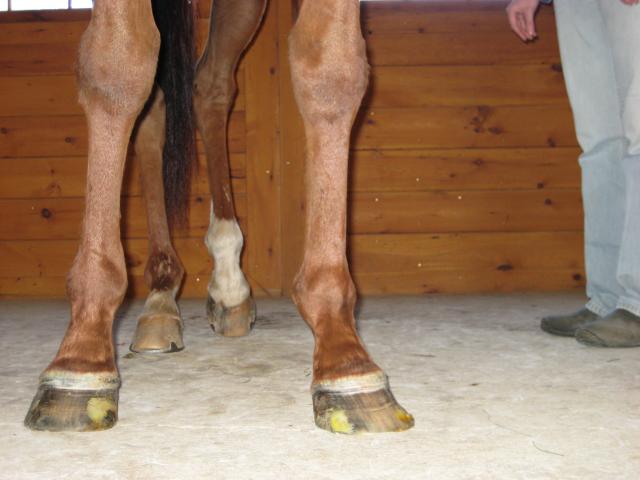 “I think the abscesses are the least of your troubles,” I said, walking into the barn.

Still shod in back, Garwin had about an inch of good connection between the coffin bone and the hoof wall on the front hooves. You can easily see that steep growth right under the hairline. As the wall grows out, the angle will lessen.

The remaining, severely flared wall is disconnected hoof wall. It is the wall that “rotates” (to use traditional parlance) away from the coffin bone; not the other way around. Without knowing anything more, you could assume his feet are flat. Not congenitally flat as so many folks say but flat because the feet are a mess. The hoof capsule is disconnected and too high; the boney column of the leg too low. Nothing is where it should be. Nothing’s working; there is no correct function. You could also assume that the bottom periphery of the coffin bone has become ‘moth-eaten’. Coffin bones are not suppose to be on the ground!

If this is all Greek to you, check out Learning to Evaluate Your Horse’s Feet (page down to the July 2011 post) for more information.

Why remove of the soles? The vet’s concern was that the coffin bone could become infected. Wouldn’t removing his soles also opens him to infection? And it appears that the primary cause of the problem, severely flared feet, aka chronic founder, was not being addressed. When I met Garwin in October, he was sore on any surface. And his owner was understandably frustrated. 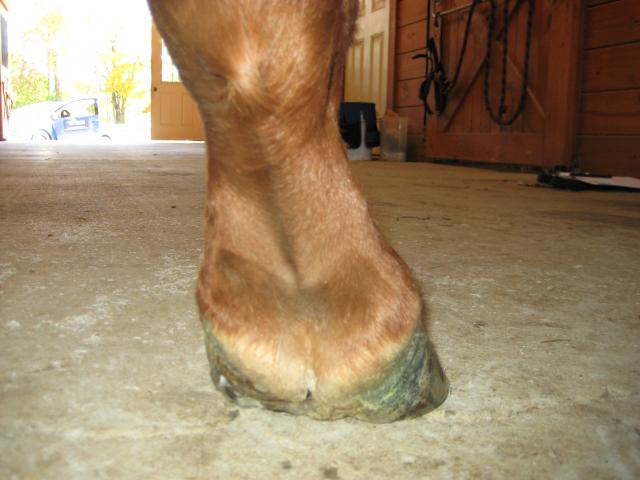 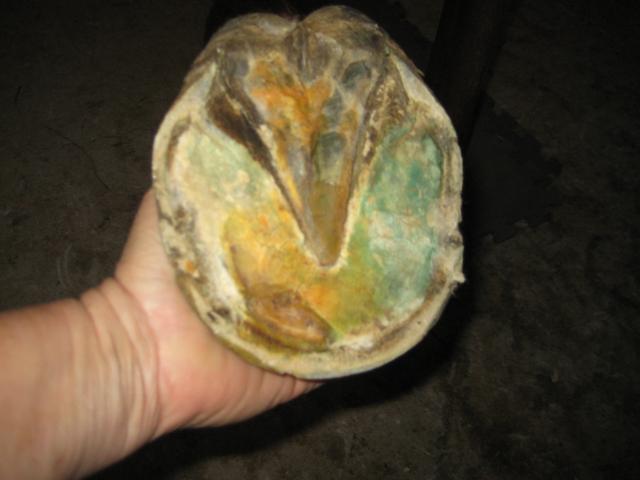 Right Front Hoof and Leg. Left Front Sole Growing Back, Slowly.
With flare like this, Easyboot Epics are hands-down my top pick. They are very forgiving to get on when dealing with deformed hoof capsules. And the Epics will take the half inch pad that Garwin needed. He walked and trotted off sound so we turned him out in the pasture.
On a weekly basis his owner maintained the mustang roll. The well connected wall grew in, as expected. In my view, having the owner do weekly trims on a horse like this speeds rehabilitation and avoid the set backs of waiting too long between trims. 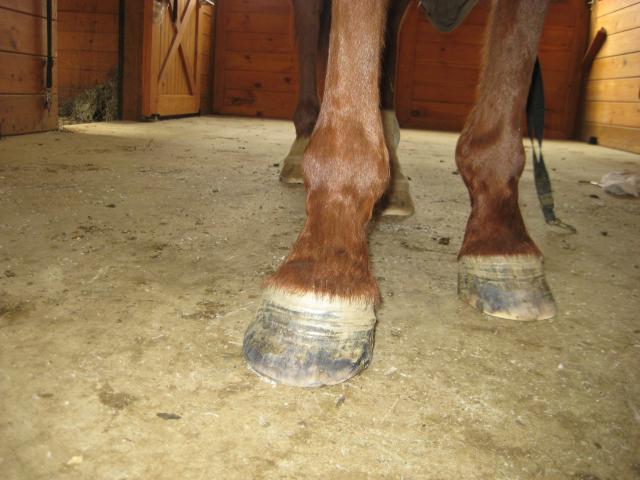 Garwin progressed nicely. By rolling the bottom of the wall, the mechanical forces ripping apart the wall from the coffin bone have been eliminated. This then allows the well connected hoof wall to grow down the foot. In one full growth cycle of about 9 months, a decent foot is grown. It will take another year or two to get adequate sole and wall thickness. The owner routinely soaked his front hooves in White Lightning as a way to deal with what must have been a large amount of necrotic tissue in these rehabbing feet.

Because Garwin was an extreme case, the owner consulted with a more experienced barefoot trimmer, my good friend Laura Florence. Laura gave her additional insights on rehabilitation: how long to use boots for turnout, when to begin riding, tweaking the trim. She also introduced Garwin and Lyndsay to Zarna Carter and her bodywork, Equine Positional Release.

Lyndsay began to see the light at the end of the tunnel. There was still concern about Garwin ever competing in combined training events – dressage, stadium jumping and cross country jumping. Garwin’s feet remained “freakishly flat”. Laura invited her back to the Center to have radiographs. The vet was not hopeful. She pronounced Garwin laminitic and recommended shoes. Laura’s concerns were allayed as there was nothing on x-ray that she didn’t expect to see. It just took an incredibly long time for the bottom of his feet to recover. But he did recover, without shoes of course.

Over time, Garwin transitioned from padded Epics – a different size for each foot! – to Gloves. His sizing has since normalized although I must say they are pretty small feet for such a big guy. This is due to early shoeing of racehorses. The coffin bone on most horses develops until they are 4. 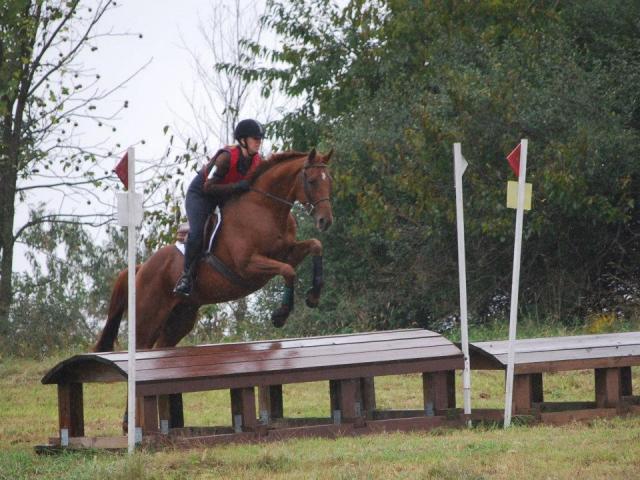 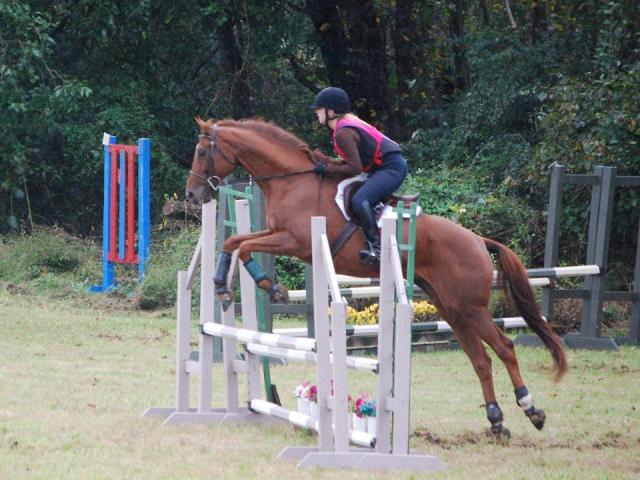 Garwin Attacks the Stadium Jumping Course in his Gloves. 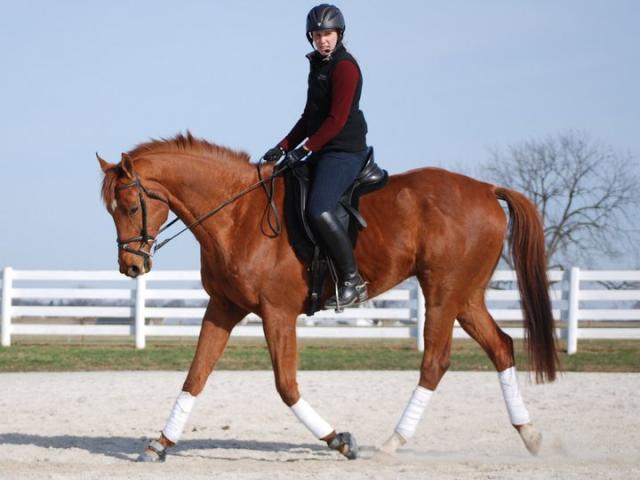 Back Home, during a dressage lesson. Check out the spiffy transmitter! 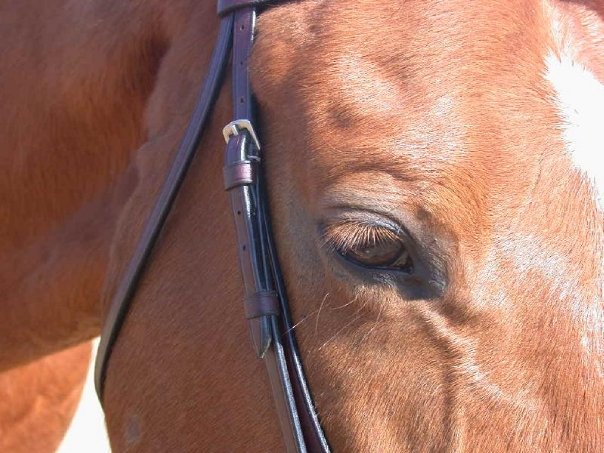 All he needed was barefoot care from his thoughtful, patient owner. And boots from EasyCare of course.

January, 2012
Lyndsay reports that Garwin has developed concavity all around. Like most Thoroughbreds his wall thickness is about 1/4″. The outer horn is strong. Frogs are stellar. He has grown a nice wall to coffin bone connection. What more could you ask for? 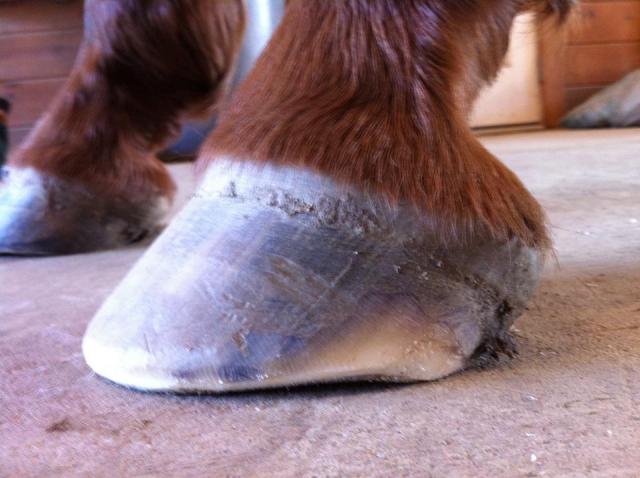 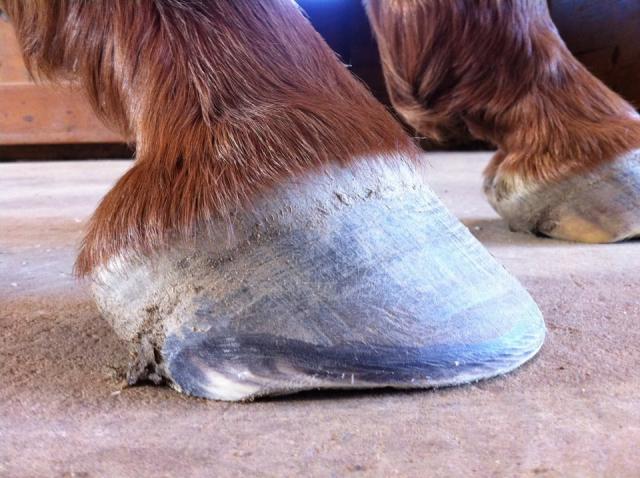 One On-Going Challenge
Rules in eventing do not permit the use of EasyCare boots in the dressage competition. If you are not familiar with this combined training, you might think Garwin should be able to go barefoot in a ring.

But unless you are competing at the highest levels, the surface of the rings are far from stellar. Some are made of stone dust which over time is like riding on cement. Alternatively the organizers might put up a fence somewhere in a field. Unfortunately Garwin does suck back on these surfaces. He needs his Gloves.

I hope an eventing competitor will step up to the challenge of having the rules changed. In the meantime, I am hopeful that Lyndsay can compete in the Glue On Glove. I have learned that in Australia, they are trimming down the outer portion of the Glue On Glove and just calling it a Glue On! (Better to ask forgiveness than permission?)

Better to change the rules!

If you would like to see more photos of this great team, go to Lyndsay Poole’s Facebook.

In March, I will feature another story of the Thoroughbred racehorse, Chance and his friend, 2 year old Zola. Check them out at The Racehorse Experiement.